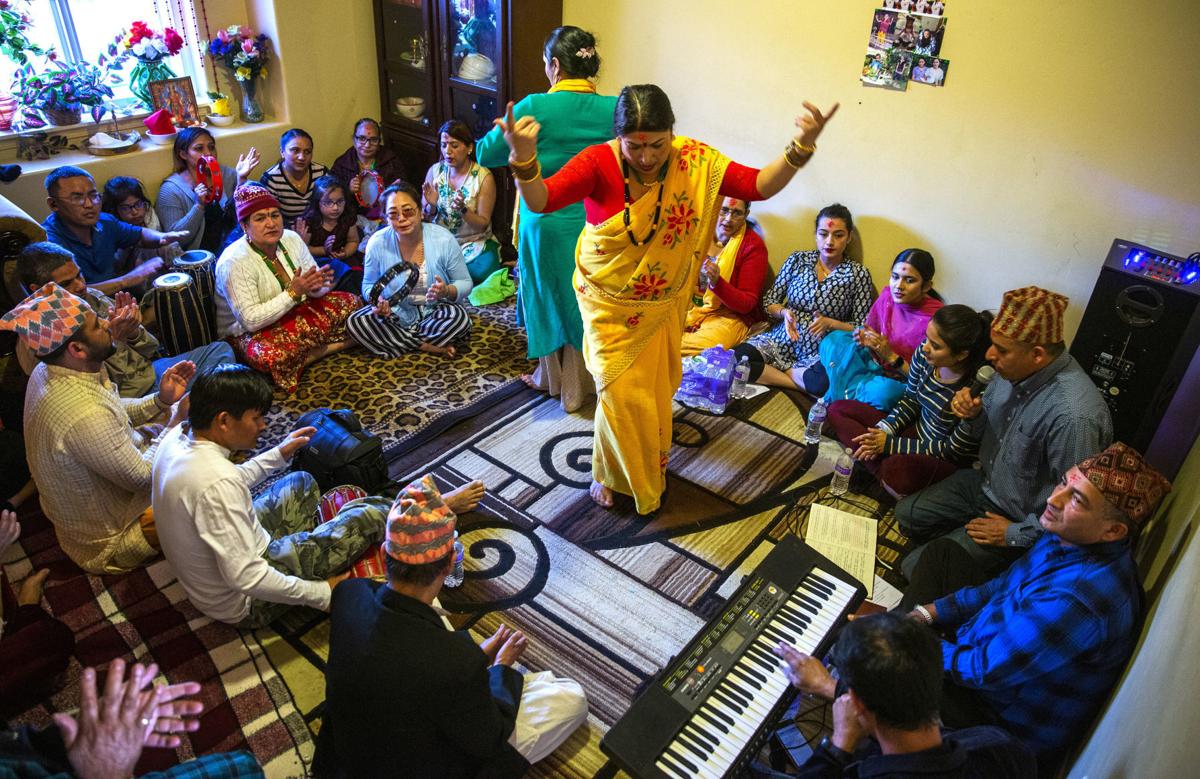 Bal Tamang, bottom left, attends Rama Navami, a Hindu festival that celebrates the birthday of Lord Rama, as Laxmi Khadka, center, dances in celebration Saturday, April 13, 2019, at a friend's house in Twin Falls. Although Tamang, a Bhutanese refugee who resettled in Twin Falls, is Buddhist, he often attends Hindu celebrations to support his friends.

In this 2017 file photo, Abdikadir Chimwaga cuts arugula from his plot he shared with his wife, Sarbah, at a refugee garden off Five Mile Road in Boise. Originally from Somalia, Abdikadir lived in a refugee camp in Kenya for 14 years before coming to Boise. Abdikadir has been part of the farmer entrepreneur program through Global Gardens and the Idaho Office of Refugees. 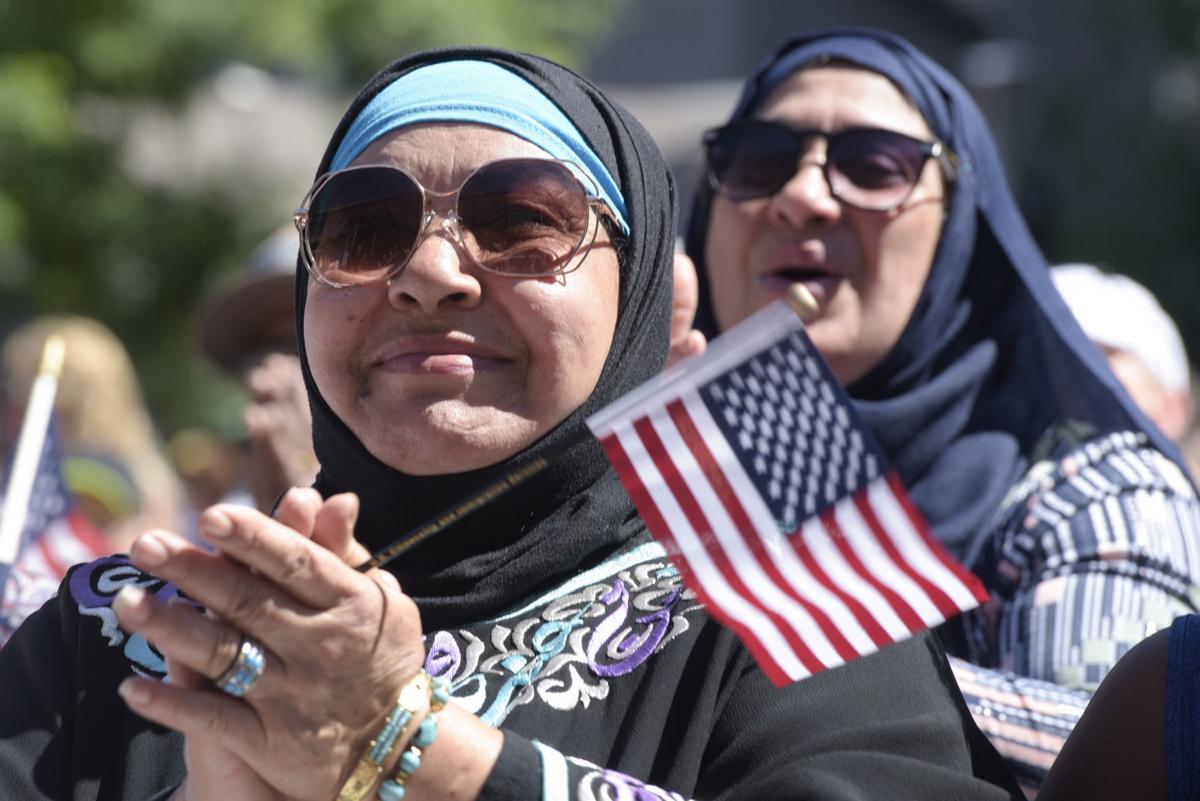 Waffe Alwan claps during a June 2018 citizenship ceremony in Boise at Grove Plaza. Alwan was one of 20 refugees that received their citizenship certificates. 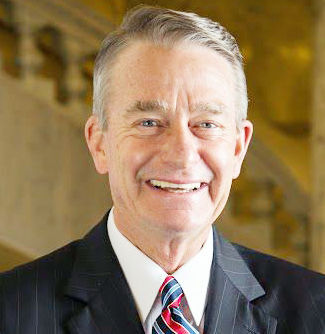 Bal Tamang, bottom left, attends Rama Navami, a Hindu festival that celebrates the birthday of Lord Rama, as Laxmi Khadka, center, dances in celebration Saturday, April 13, 2019, at a friend's house in Twin Falls. Although Tamang, a Bhutanese refugee who resettled in Twin Falls, is Buddhist, he often attends Hindu celebrations to support his friends.

In this 2017 file photo, Abdikadir Chimwaga cuts arugula from his plot he shared with his wife, Sarbah, at a refugee garden off Five Mile Road in Boise. Originally from Somalia, Abdikadir lived in a refugee camp in Kenya for 14 years before coming to Boise. Abdikadir has been part of the farmer entrepreneur program through Global Gardens and the Idaho Office of Refugees.

Waffe Alwan claps during a June 2018 citizenship ceremony in Boise at Grove Plaza. Alwan was one of 20 refugees that received their citizenship certificates.

BOISE — Gov. Brad Little's decision to continue to allow refugee resettlement in Idaho wasn't out of step with his colleagues elsewhere. Nineteen Republican governors told the Trump administration in December and January they wanted to keep taking refugees, with just Texas Gov. Greg Abbott asking to opt out.

Not everyone was happy with it. Facebook comments and Twitter replies on Little's accounts quickly filled with people angry at his decision, and hundreds of people contacted his office to express their displeasure. Documents provided in response to a public records request show both the scale of the blowback and his administration's work to present facts to justify the governor's decision.

In September 2019, President Donald Trump issued an executive order to require state and local consent for refugee resettlement. The only resettlement centers in Idaho are in Twin Falls and Boise. Ada and Twin Falls county commissioners and the Twin Falls and Pocatello city councils all passed resolutions supporting the program. In late December, Little agreed.

"I support the decision of county government on this matter," Little wrote in two brief, identical letters to U.S. Secretary of State Mike Pompeo.

“The only thing I did was basically allow the two communities that wanted to do that to accept refugees. … I just said they requested it, and it’s OK with me,” Little said in an interview in February.

Little said he is glad Trump is taking local input into account and answering local officials' questions, comparing it favorably with Obama's approach.

"The refugees today are way different than they were four or five years ago," Little said. "They're rigorously filtered. There's a lot more work done on them, and they're more attentive to the state (and) what programs are there."

Little said he wasn't sure if he would support expanding refugee resettlement to other communities, saying it would require programs to help people find jobs, learn English and provide services.

Little's staff produces constituent feedback reports regularly. From Dec. 27 to Jan. 17, his office received 650 contacts from refugee resettlement opponents and 100 from supporters. This was by far the issue Little's staff heard the most about during that period — the second-hottest issue was salmon protection, which prompted 49 contacts.

"In general, the calls to me have not been overly aggressive," Tara Wolfson, director of the Idaho Office for Refugees, emailed Little policy adviser Sara Stover on Jan. 7. "Most folks sound older, many said they are from California, living in Northern Idaho. They are almost all blatantly racist and many anti-Muslim. So far I have received no death threats."

After the initial burst of opposition, things died down. From Jan. 17 to Jan. 24, 14 refugee opponents and five supporters emailed Little, making it the third-hottest issue that week behind support for Medicaid expansion funding and climate change concerns.

"I would say a lot of the concerns were based on misunderstandings with the program, or not understanding that Idaho already had refugee resettlement programs, or that both Ada and Twin Falls had requested the governor submit those letters on their behalf," said Little's press secretary Marissa Morrison.

Little didn't issue a news release or do much to draw attention to his decision, and it received little mainstream media coverage other than a few stories after he sent the letters to Pompeo. However, right-wing websites such as Redoubt News and the Gem State Patriot lambasted Little.

"Let’s get down to the nitty gritty here, folks," the Gem State Patriot wrote on Jan. 8. "The Governor said yes to more refugees because of pressure from the food processing companies who look for and are willing to train unskilled workers. At the same time, he wants to placate the left in the Boise area for his next election. This is all about MONEY and Power, and not much else."

"You helped us show that the United States is a nation and culture that has, for centuries, welcomed those who yearn for and work toward peace, safety, and a better life for themselves, their families and our communities," she wrote. "Thanks to you, Idaho will continue to embrace that legacy."

"I have had many emails and phone calls from angry Idaho citizens concerning the governor's behind-the-scenes decision to support more refugees into Idaho with little input from citizens," Scott wrote in a constituent newsletter.

Some of her northern Idaho colleagues expressed similar views at a town hall in late January.

“I think we have enough people who need help without bringing refugees in,” said Sen. Don Cheatham, R-Post Falls. “Help our own first.”

Rep. Vito Barbieri, R-Dalton Gardens, said people with “a hostile ideology posing as a religion (are) being brought in as refugees" and predicted it would lead to "no-go zones" in Idaho. He said he was astounded at Little’s decision.

“I will continue to be vocal about this,” Barbieri said. “It has to be addressed. It has to be in the forefront of our minds."

A few others expressed more mixed views. Sen. Steve Vick, R-Dalton Gardens, praised Trump for cutting the number of refugees, improving the vetting process and bringing states into the decision.

“If I was governor, I would have stopped it, not because I’m opposed to refugees but until I found out that the process that they had for allowing people into this country was keeping us safe,” Vick said.

Sen. Mary Souza, R-Coeur d’Alene, said she would like to see church groups and other such organizations do more to help refugees instead of taxpayers, giving the example of two of her sisters-in-law who fled communist Hungary and had a sponsor in Spokane.

“I think that part of the reaction that we have to refugees in Idaho is there is a tremendous amount of government entitlements that are given to these people when they come in,” she said.

According to records from Little's office, 3,746 of the 351,231 Medicaid recipients in Idaho in the 2019 fiscal year were refugees, or 1.1% of the total, and 4,014 out of 220,735 food stamp recipients, or 1.8%. Four hundred and fifty of the 14,374 people receiving help to pay child care costs were refugees, as were 452 of the 22,039 people getting Aged, Blind and Disabled cash assistance. Out of 5,062 people receiving Temporary Assistance for Families in Idaho cash assistance, 31 were refugees, as were 217 of the 72,538 people getting a tax credit to buy health insurance on the state exchange.

Little's office tried not to say much initially. His staff drew up a few talking points saying he respected the counties' decision.

"We decided to stick with the facts of the decision and not say anything more," Emily Callihan, Little's communications director, wrote in a Jan. 10 email.

On Jan. 23, Callihan sent out a longer set of talking points that said 49 out of 50 states resettle refugees and Idaho has done so since 1975.

"The continuation of refugee resettlement in Idaho should not detract from the bigger immigration crisis facing our country — the open border," the talking points said. "Let’s direct our voices and continue to focus our efforts on encouraging Congress to act and protect our country by ending illegal immigration."

Ninety percent of refugees in 2019 came from Christian countries, the talking points said. They also said Little’s decision may be a moot point — a federal judge in Maryland issued an injunction against Trump's order in January.

"Refugee resettlement is a legal immigration process that gives our country the opportunity to screen those who come in," Callihan wrote. "In fact, refugees are the most thoroughly screened people who travel into the United States, and under President Trump, those screening processes are under a greater level of scrutiny."

Little's staff also worked with Wolfson at the Idaho Office for Refugees to answer anti-refugee arguments. On Jan. 14, Wolfson sent Morrison an email with links to news articles about refugee success stories from Boise and Twin Falls. She also included a list of “the misinformation we are hearing,” with suggested responses.

Wolfson wrote there are refugees of all religious faiths and a majority coming now are Christians. She highlighted the 2% unemployment rate in Boise and the 3% rate in Twin Falls to answer objections that refugees are taking American jobs. She pointed to a 2017 U.S. Department of Health and Human Services study showing refugees generate $63 billion more in government revenue than is spent on resettlement. Another common objection, she wrote, is that we aren't doing enough to take care of our own veterans, homeless and seniors.

"Taking care of our most vulnerable is not an either/or situation, but rather an 'and' situation," Wolfson wrote. "We can come together for people who are homeless, veterans, seniors and refugees to build a stronger state/community for all."