Advocates for a ballot initiative to boost education funding in Idaho by raising income taxes on corporations and the rich plan to start gathering signatures again early next week.

On Wednesday, three judges for the federal Ninth Circuit Court of Appeals ruled 2-1 to deny the state of Idaho's motion for an emergency stay that would have prevented Reclaim Idaho from starting to gather signatures online. While the legal wrangling isn't over — the Ninth Circuit plans to hold a hearing on the merits of the case sometime in August, said Reclaim Idaho spokesman Jeremy Gugino — in the meantime Reclaim can start to gather signatures online, and plans to do so early next week.

"After weeks of work and multiple discussions with the state, we’ve developed a detailed, industry-standard plan for the collection of electronic signatures in compliance with the judge’s order," Reclaim co-founder Luke Mayville said in a statement. "We’ve made every effort to solicit the state’s feedback and adjust our design accordingly. We're confident the system in place will indeed meet the highest available standards for electronic signature gathering." 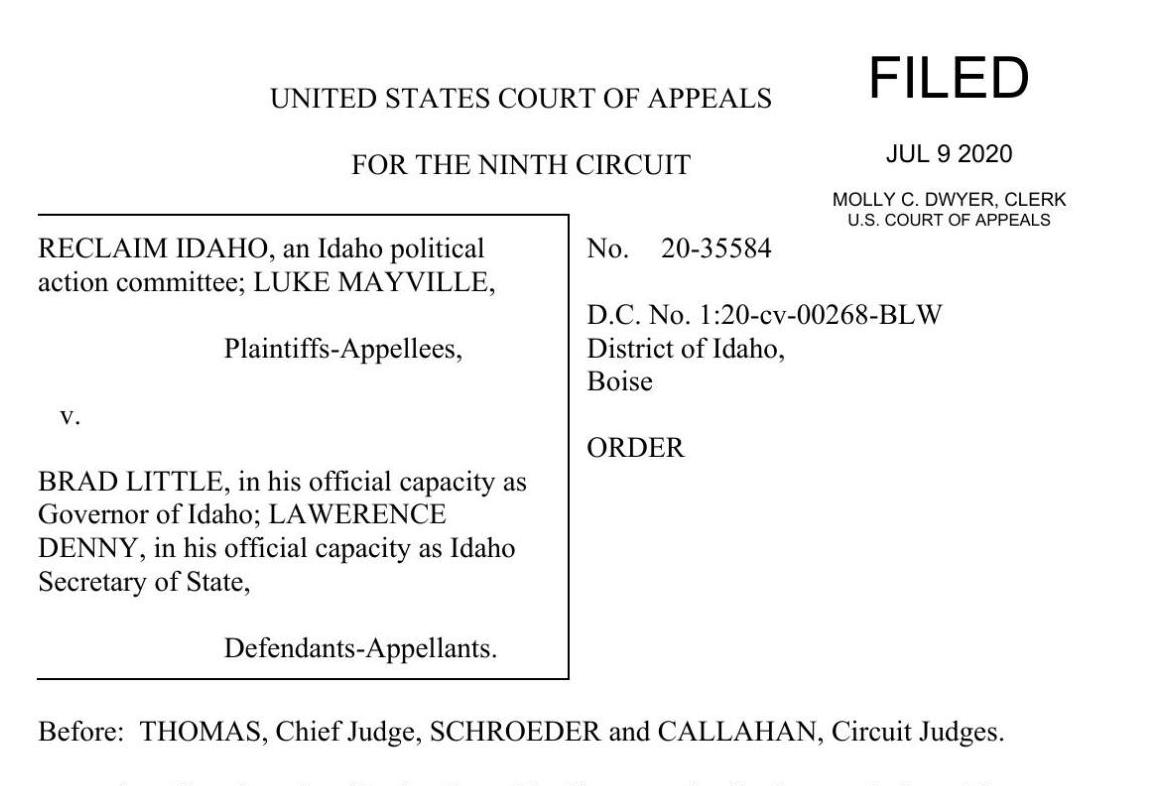 Reclaim had gathered about 33,000 signatures before suspending signature-gathering in mid-March in response to the coronavirus pandemic. It needs about 22,000 more to meet the statewide threshold to make the November 2020 ballot, although in fact it will need more signatures since an initiative also needs the signatures of 6% of registered voters in 18 of the state’s 35 legislative districts to qualify for the ballot as well as hitting the threshold of 6% of registered voters statewide. So far Reclaim has hit or has nearly hit the 6% threshold in eight legislative districts, Gugino said.

Gov. Brad Little said the state plans to appeal the decision and seek a stay from the U.S. Supreme Court.

"We will continue our efforts to preserve the integrity of Idaho’s duly enacted laws and to prevent the disruption to our upcoming elections that this decision will cause," Little said.

Reclaim Idaho, the group behind the Medicaid expansion ballot initiative which passed in 2018, had been pushing an “Invest in Idaho” initiative to raise the corporate tax rate from 6.925 percent to 8 percent and raise individual income taxes on a single person’s income over $250,000 a year or a couple making more than about $525,000 a year from 6.925 percent to 9.925 percent. The group has said this could generate $170 million to $200 million a year. Reclaim sued the state seeking a way to try to get on the ballot despite the limits caused by the pandemic, and in June U.S. District Judge Lynn Winmill gave the state the choice of either certifying Reclaim Idaho’s petition as is, placing it on the ballot, or it can give the group another 48 days to collect signatures electronically in hopes of meeting the signature threshold for its initiative to qualify for the ballot.

Gugino said Reclaim is still finalizing the website it plans to use to gather signatures. Mayville has met with the state's lawyers several times over the last week and listened to their input on what such a website should look like.

"We took everything they said very seriously (and) to heart," Gugino said.

Editor's note: The three judges were split, ruling 2-1 in favor of Reclaim Idaho. This story has been updated to clarify that.