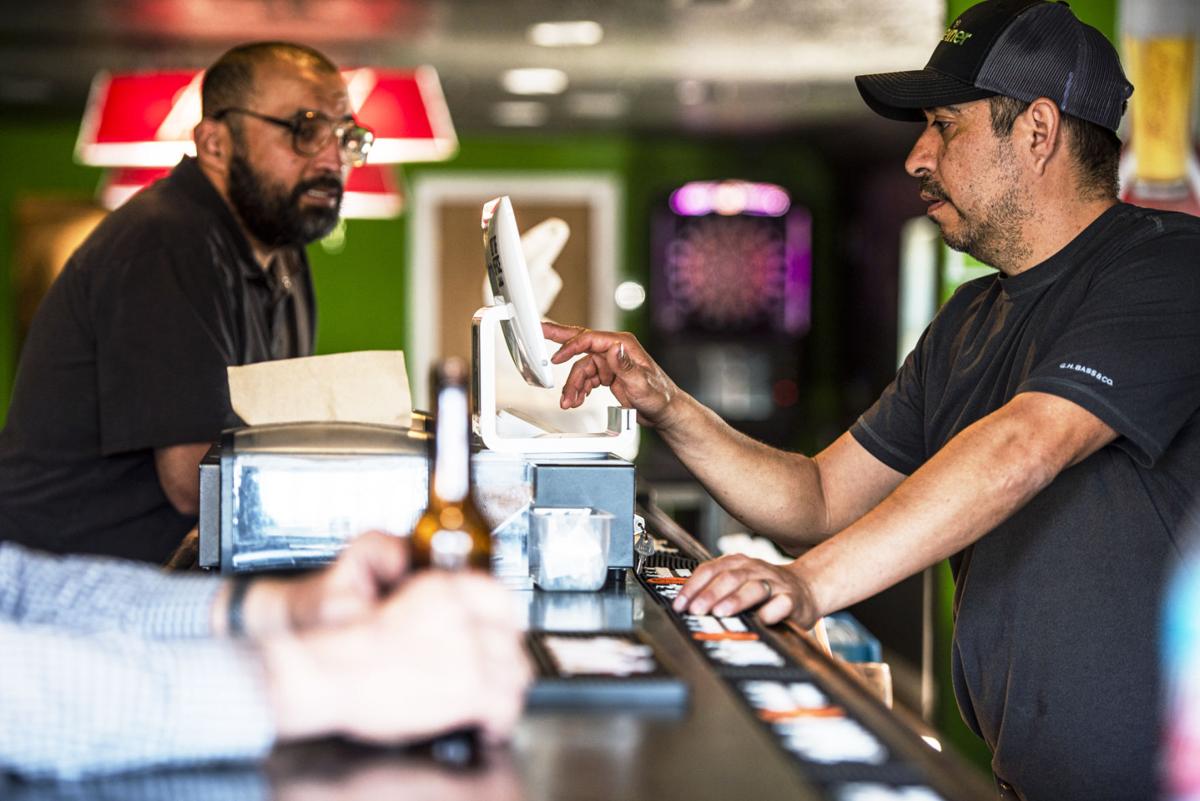 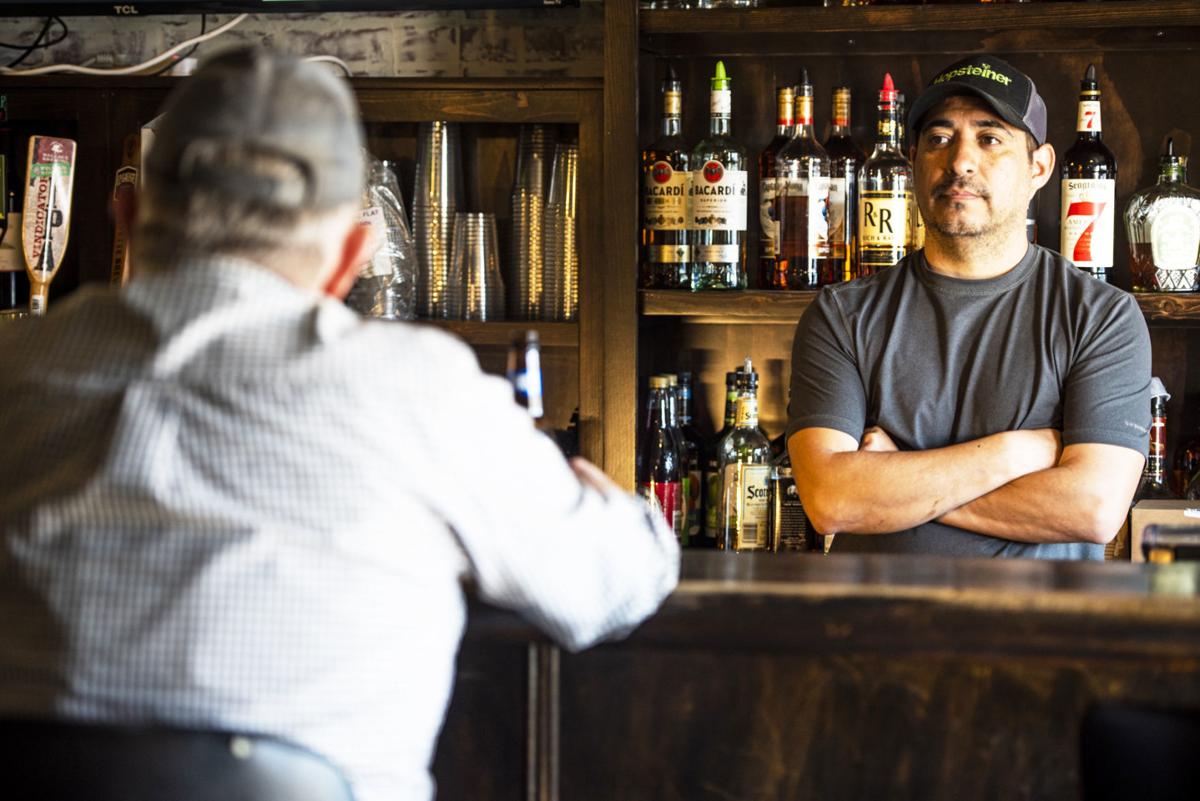 Frank Castellanos, right, speaks with customers at Hop House Bar in Wilder on Thursday, May 7, 2020. 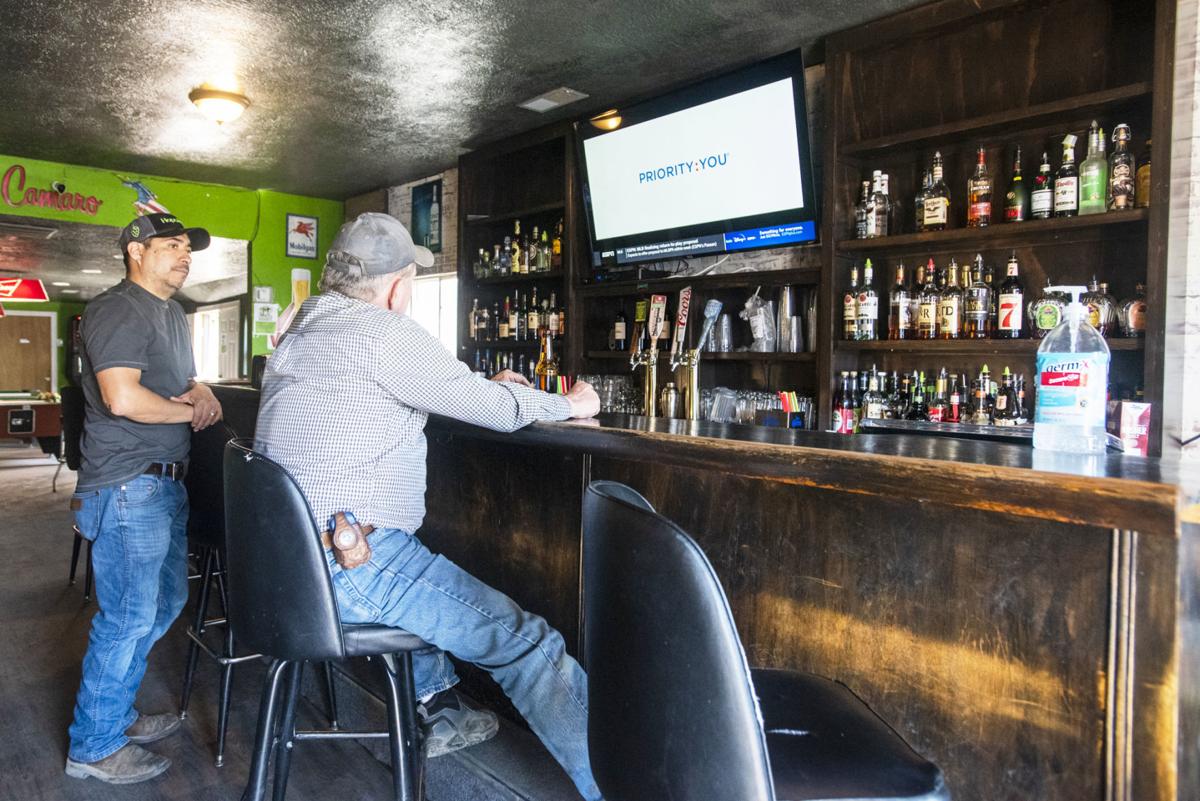 Frank Castellanos, left, speaks with customers at Hop House Bar in Wilder on Thursday, May 7, 2020. 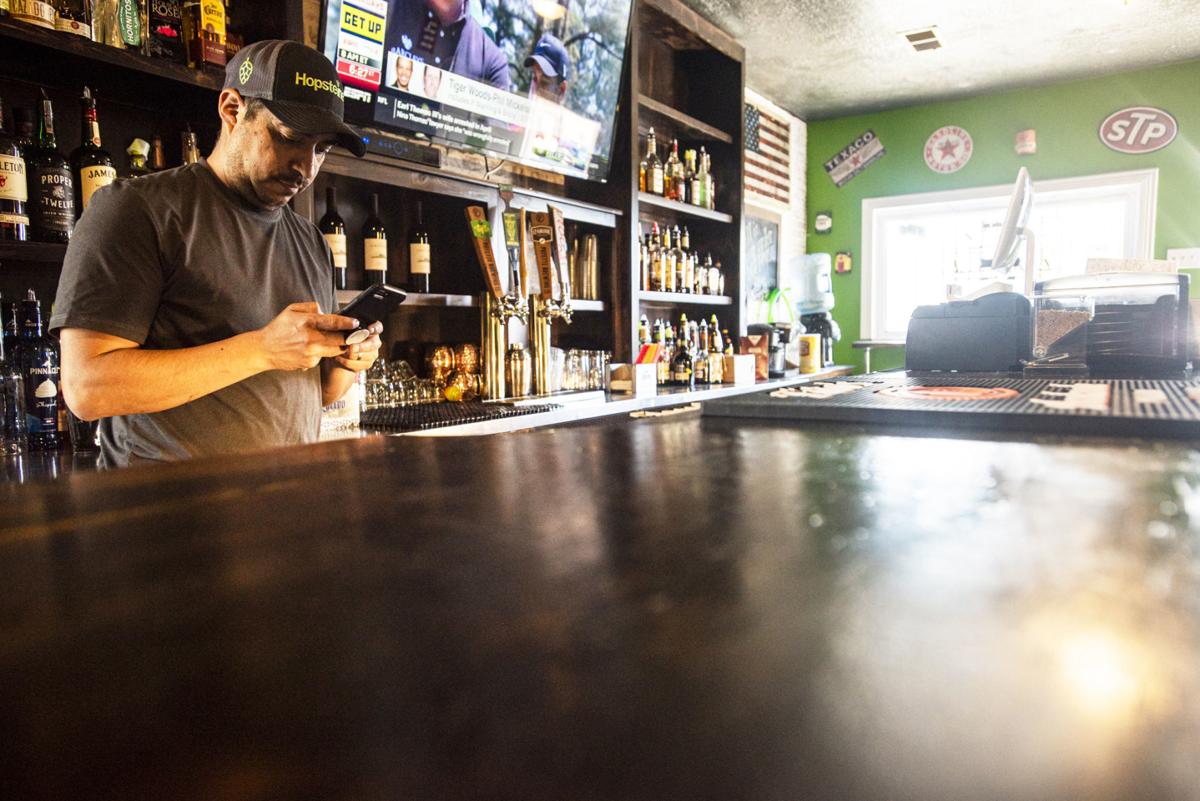 Frank Castellanos sits behind an empty bar top and waits for takeout orders at Hop House Bar in Wilder on Thursday, May 7, 2020. 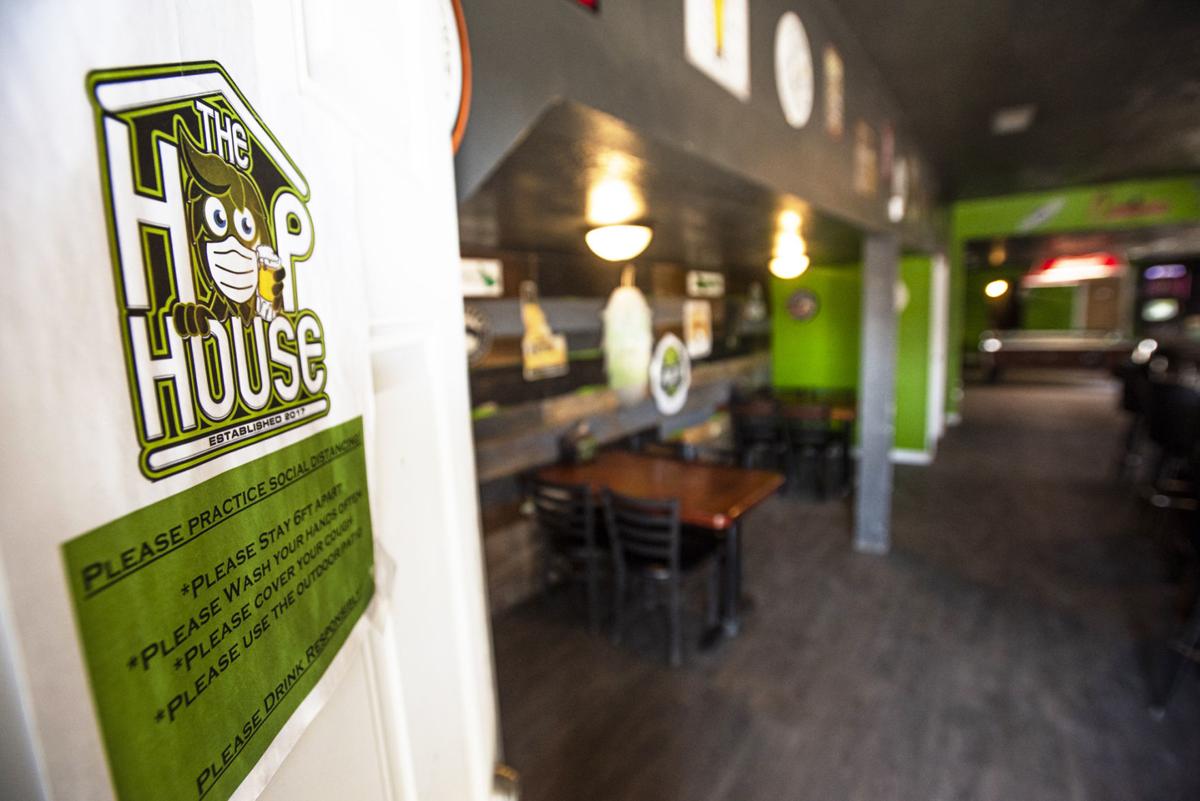 A sign on the door at Hop House in Wilder asks patrons to practice social distancing and good hygiene on Thursday, May 7, 2020.

Frank Castellanos, right, speaks with customers at Hop House Bar in Wilder on Thursday, May 7, 2020.

Frank Castellanos, left, speaks with customers at Hop House Bar in Wilder on Thursday, May 7, 2020.

Frank Castellanos sits behind an empty bar top and waits for takeout orders at Hop House Bar in Wilder on Thursday, May 7, 2020.

A sign on the door at Hop House in Wilder asks patrons to practice social distancing and good hygiene on Thursday, May 7, 2020.

Wilder voters will have a say in the May 19 election whether the city should license the sale of liquor by the drink.

Currently, the city of about 1,800 residents west of Caldwell only permits the sale of beer and wine. Idaho Code gives cities the ability to determine if liquor can be sold by the drink within city limits.

This is the second time in recent years that Wilder is asking voters about permitting the sale of liquor by the drink, said Mayor Steve Rhodes, noting that the measure failed in 2005 by just six votes. The measure needs a simple majority to pass.

Frank Castellanos, who owns Hop House, a bar and restaurant in Wilder, has been working with the city to get the question on the ballot. The push from Castellanos follows some miscommunication between two local bars and the city.

Castellanos said in 2005, after the liquor vote failed, a different bar in town was able to obtain a license to sell liquor by the drink because of miscommunication between individuals and the city. That bar later gave its liquor license to Castellanos for Hop House.

Castellanos, whose bar has been open in Wilder for two years, found out that the city did not have the ability to issue the license in the first place. He said he has been working with city officials to put the question before voters. He said the city has allowed him to keep selling liquor with the license until the vote happens on May 19.

"We have built a customer base here," Castellanos said, "And the good thing about this is we were able to get the signatures. (The city) was nice enough to let us put it back on the ballot."

Castellanos said the liquor license question has a lot of support from his customers, but the problem is the bar's customers mostly come from out of town, including from Nampa and Boise. Despite this, he does believe there is support from some local residents.

"I am hoping that now being open two years, that people can see we run a clean establishment," he said. "Hopefully it will change people's minds."

Rhodes said the city has been trying to work with Hop House. He said the license confusion is "no fault by the Hop House, the city issued the license without being able to sell it."

State code allows every city to have at least two liquor licenses, with one additional license for every 1,500 people.

Wilder's neighboring city of Greenleaf bans all alcohol sales. When the ban was challenged by a business owner in 2014, the city council voted to keep it in place.

A year later, voters in Melba, another small city in Canyon County, voted in favor of allowing liquor sales by the drink.

The Middleton School District, for the second time this year, is seeking voter approval to run a supplemental levy of $1.5 million each year for the next two years.

The levy needs a simple majority to pass. In March, 56% of voters voted against the levy.

The district's website outlines possible responses if the levy fails, including:

Superintendent Sherawn Reberry said after outlining the potential budget cuts for the coming year, "the community is talking about the levy election more."

Reberry also said there is apprehension among district employees about the levy.

"Absentee balloting compounds that concern, especially with the extended window for requesting and returning ballots," she said.

The state is holding an all-absentee ballot election for the May 19 primary because of the coronavirus pandemic. Voters must request an absentee ballot by May 19, but will have until June 2 to return their ballot the county elections office.

The estimated average annual cost to the taxpayer on the Middleton levy is $94 per $100,000 of taxable assessed value per year, based on current conditions.

The current levy is used for curriculum, technology, and K-12 programs that prepare students for careers and college, according to the district website. The $1.5 million levy would allow the district afford building repairs.

The district has also tried to pass a bond measure to build a new elementary school in recent years, which has failed three times.

A special tax levy is on the ballot for Ada and Canyon County voters who live in the Kuna Rural Fire District. The levy would bring in an additional $1.2 million to the district per year for two years, in addition to its current budget of roughly $3 million.

The cost to taxpayers would be roughly $61 annually per $100,000 of taxable property value.

The district is proposing to add three to six new full-time firefighter/paramedics in order to increase the number of personnel on shift, expand the fire station, and replace equipment and fire and ambulance apparatus, according to its website.

The two-year increase needs a simple majority to pass, 50% plus one vote.

The West Ada School District will ask voters within its boundaries on May 19 to renew a two-year, $14 million per year supplemental levy.

If approved, the levy will cover operational costs that support the district's current programs, school days and teacher-to-student ratios. The 2020 levy would renew a 2018 levy, which was approved by 68.8% of voters two years ago. West Ada has successfully renewed the $14 million per year levy four times since 2012.

The estimated average annual cost to the taxpayer on the proposed levy is $52.60 per $100,000 of taxable assessed value, per year. Since West Ada currently collects a $14 million levy, which will expire when the proposed levy goes into effect, the 2020 levy will not change the current taxing rate for the district. West Ada's current levy rate is $351 per $100,000 of taxable assessed value, which is the lowest among comparable school districts in southwestern Idaho.

To pass, the levy requires 50% plus one vote approval from voters.

West Ada planned to also ask voters this month for a $69 million bond, to be used for new school facilities, but the West Ada board of trustees in March voted to cancel the bond measure due to the economic impact of the novel coronavirus.

The May 19 election will be an all-absentee ballot election due to the COVID-19 pandemic.

Voters must request a ballot, either through their county clerk, online at idahovotes.gov, or by using the request form mailed to them by the Idaho Secretary of State's Office. Because it's a primary election, voters will need to request a Republican, Democratic or non-partisan ballot. Only registered Republicans can request a Republican ballot, but Democratic ballots are open to voters of any affiliation.

Voters have until 8 p.m. June 2 to return their completed ballot to their county clerk’s office.

All 105 seats in the Idaho Legislature are up for reelection this year, as well as three congressional seats and a number of county positions and various ballot measures.

An easy way to request a ballot and register to vote is to go online to idahovotes.gov. You'll get the ballot in the mail and will then need to mail it or return in person to your county elections office by 8 p.m. June 2. You can also request a ballot from the county.

The Idaho Press partnered with the League of Women Voters to conduct candidate surveys for our voters guide.

Candidates' answers for races in the Ada County area will be inserted into the Idaho Press and the Meridian Press on Friday, May 8.

Candidates' answers for races in the Canyon County area will run in Sunday's paper, May 10.

The print guides will only include answers from candidates in contested primary races. Voters can see those and more surveys online at vote411.org.