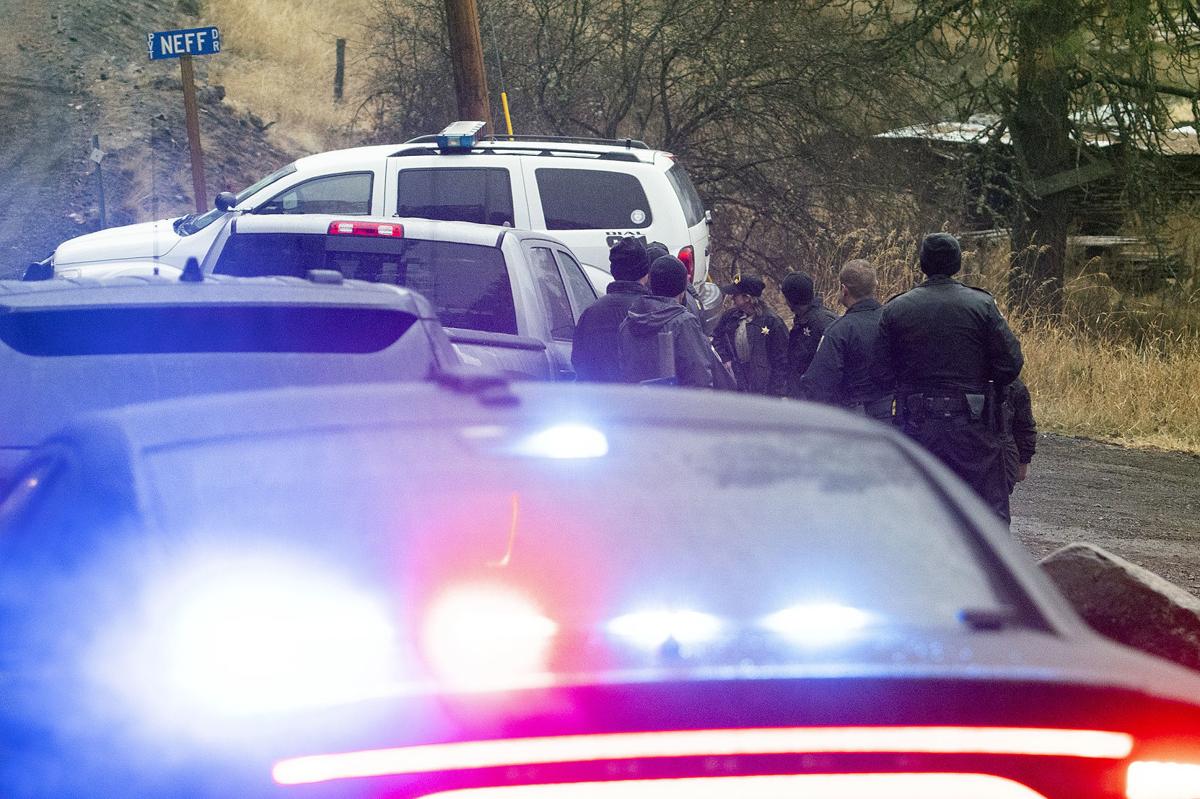 A group of law enforcement officers including deputies from the Clearwater County Sheriff’s Office and the Idaho State Police man a blockade at the intersection of Crow Bench Road and Neff Road on Tuesday east of Orofino. The road leads to the Nickersons’ property. 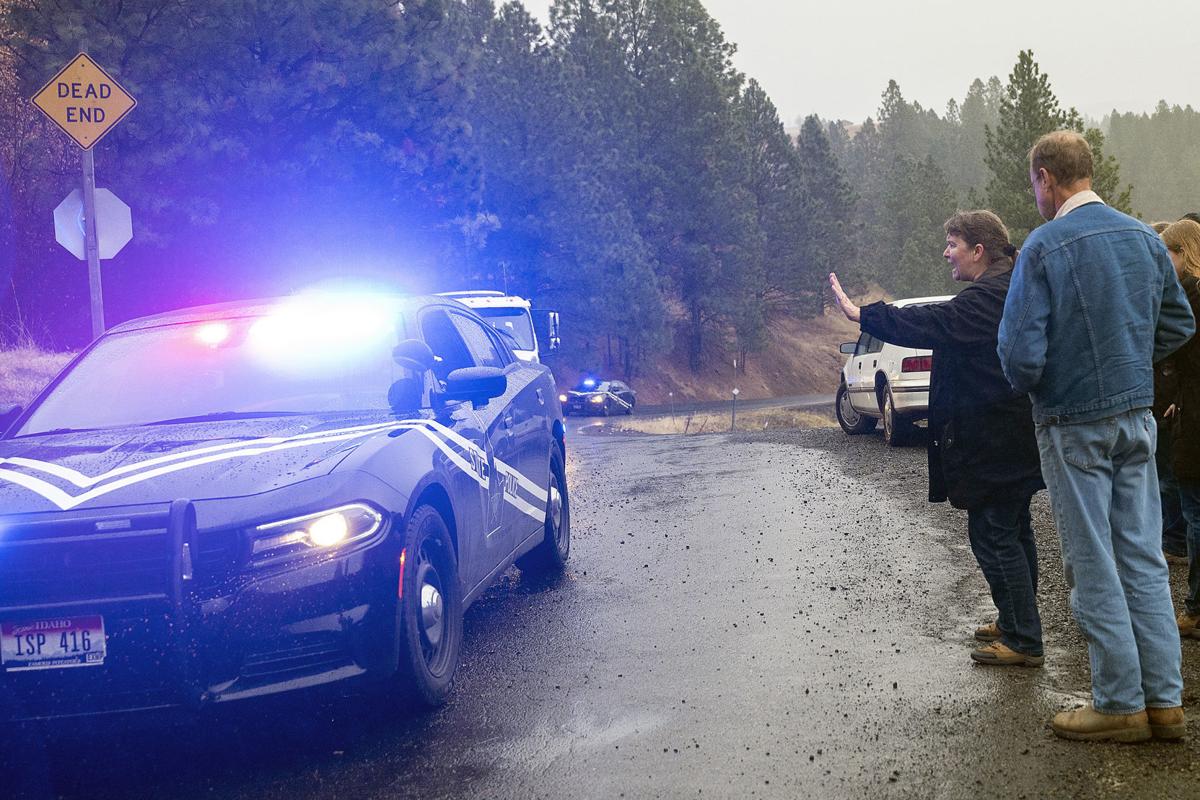 Donna Nickerson (center right) holds out her hand gesturing for a small caravan of Idaho State Police vehicles to stop at the top of Crow Bench Road so she could speak to them on Tuesday afternoon east of Orofino. 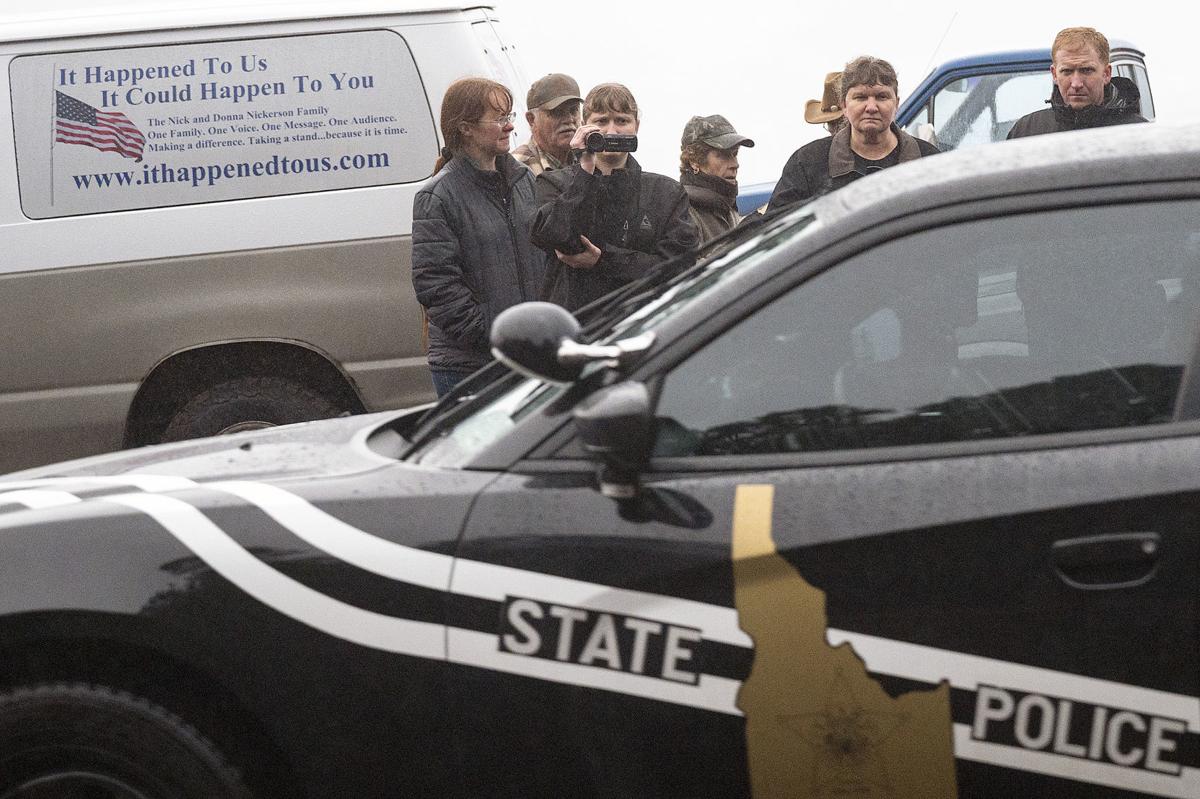 Surrounded by family, friends and supporters, Donna Nickerson (second from right) look on as an Idaho State Police trooper drives down Crow Bench Road on Tuesday afternoon outside Orofino. 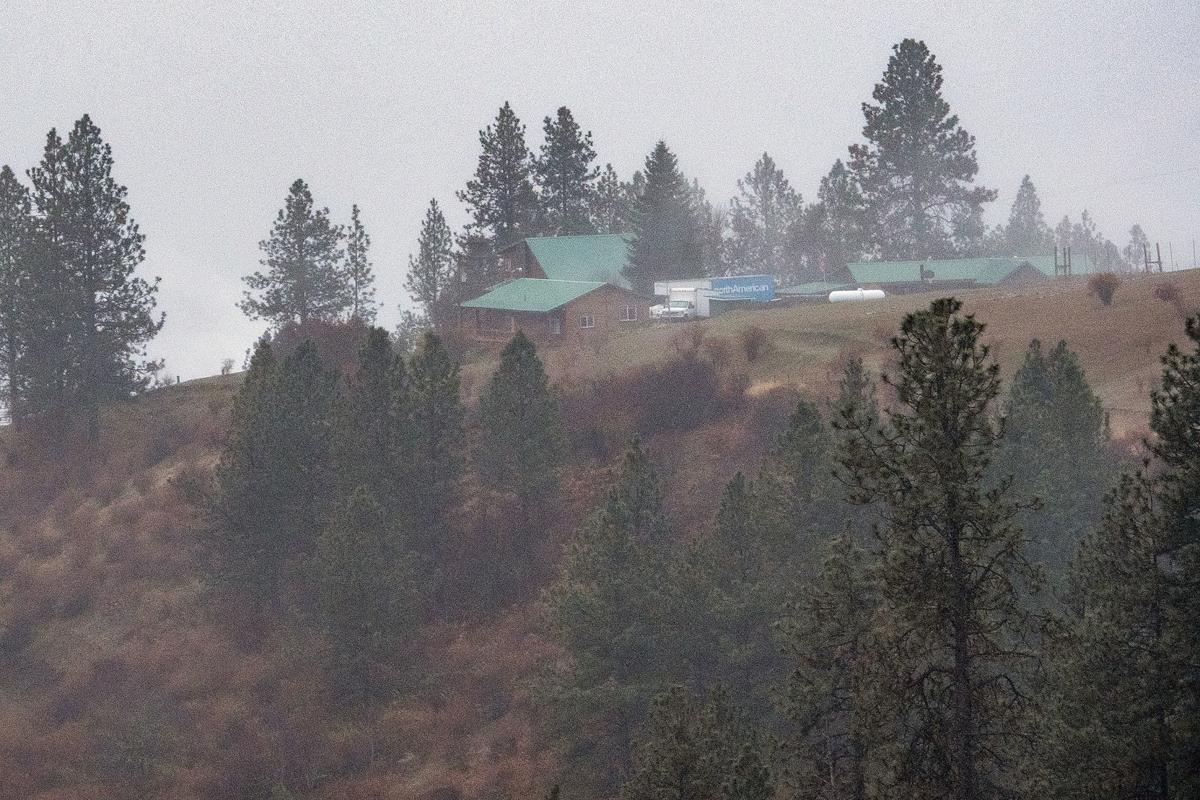 Moving trucks can be seen outside one of the buildings on the Nickersons' property east of Orofino on Tuesday evening.

A group of law enforcement officers including deputies from the Clearwater County Sheriff’s Office and the Idaho State Police man a blockade at the intersection of Crow Bench Road and Neff Road on Tuesday east of Orofino. The road leads to the Nickersons’ property.

Donna Nickerson (center right) holds out her hand gesturing for a small caravan of Idaho State Police vehicles to stop at the top of Crow Bench Road so she could speak to them on Tuesday afternoon east of Orofino.

Surrounded by family, friends and supporters, Donna Nickerson (second from right) look on as an Idaho State Police trooper drives down Crow Bench Road on Tuesday afternoon outside Orofino.

Moving trucks can be seen outside one of the buildings on the Nickersons' property east of Orofino on Tuesday evening.

OROFINO, Idaho — A family that had for years resisted eviction from their property near Orofino were removed from the home Tuesday without violence.

Donna and Charles “Nick” Nickerson and an extended group of children and other family members stood alongside Crow’s Bench Road, about 4 miles northeast of Orofino on Tuesday afternoon, watching in the rain as a moving van, escorted by about six Idaho State Police troopers and Clearwater County Sheriff’s deputies, drove off with the last of their belongings.

“They kicked in my windows and they’re stealing all my stuff in the rain,” Donna Nickerson said angrily. “I did nothing. The sheriff called me down and I went down as a citizen. I was very gracious. … While I was there he informed me … that they had already taken possession of our property.”

In July, during an interview with the Lewiston Tribune, Donna Nickerson said: “Sheriff (Chris) Goetz will have to shoot me to take me off my property.”

Goetz said Tuesday night the eviction went without major incident, although one woman who was in the home when officers arrived Tuesday morning had been taken into custody. It is believed she is a family member but the woman has refused to reveal her identity. Goetz said the woman would not open the door when officers arrived, so officers did break a window to gain access to the house. After removing her, officers offered to drop off the woman with the other members of the Nickerson group. She refused and would not cooperate with the officers, so she was taken to the county jail and likely will be charged with civil trespassing.

Goetz said the eviction was handled the way it was to try to avoid bloodshed. Even though Donna Nickerson claimed Tuesday she had never threatened violence, Goetz reminded her she had made that statement several times over a period of many months to a number of people in the community and elsewhere.

“I tried to explain, for everyone’s safety, that’s why we had to do it the way we did it,” Goetz said. His office has been getting calls from several of the Nickersons’ supporters, “but they don’t know the whole story; they only know what the Nickersons have told them,” he added.

The Nickersons’ saga began in 2011, nine years after the Nickersons and their family of 10 children moved to Idaho from “the Deep South,” Donna Nickerson said, including Alabama, Georgia and Florida. Her husband, Nick Nickerson, is an ordained pastor, she said, and the family also operates a similar ranch in Montana that is facing the same foreclosure issues.

They purchased the 50-acre property, located east of Orofino in the Upper Fords Creek area, for $285,000 and opened it as a Christian retreat and renewal center, serving mostly pastors. Donna Nickerson said they “never charged a dime,” to people who spent time there.

In 2011, PHH Mortgage, which assumed the original loan from JP Morgan/Chase, filed a complaint against the Nickersons in 2nd District Court in Orofino claiming they had defaulted and sought to foreclose. Thus began a long process through the court system, in which courts have ruled several times against the Nickersons and in favor of the banks.

Although the Nickersons maintain they never missed a payment, the courts determined they had presented no evidence to support that claim. When the Nickersons’ attorney, John C. Mitchell of the Lewiston firm of Knowlton Miles, withdrew in May 2013, the Nickersons pressed on, representing themselves in the continuing litigation.

On April 4, 2014, 2nd District Judge Michael J. Griffin ruled that the Nickersons had defaulted on their loan, which stood at $340,339.84. The Nickersons filed two appeals to the Idaho Supreme Court, which backed up Griffin’s original decision. The state high court said the arguments the Nickersons presented either were not relevant to their original case or lacked substance.

The Supreme Court also ruled that the District Court did not err or abuse its discretion by favoring the case of PHH Mortgage Co. and “the Nickersons have not directed this court’s attention to any evidence which might tend to support their claims of fraud. … We hold that the Nickersons have pursued this appeal frivolously, unreasonably and without foundation,” upholding the mortgage company’s claim of $340,339.84 in the unpaid loan and awarded the company attorney fees.

A sheriff’s sale was held in August 2017 in which PHH Mortgage assumed ownership of the property.

But the Nickersons have mounted a checkmate situation by refusing to move and mounting a public campaign with a website and by driving around with their family in a van painted with their logo: “It Happened To Us; It Could Happen To You.”

Goetz talked to the family several times, trying to resolve the matter peacefully, but the sheriff acknowledged that the Nickersons said they would resist to the point of force.

In early September, Judge Gregory FitzMaurice issued a writ of eviction that was carried out Tuesday.

Goetz said the Nickersons’ belongings are being stored and they are not allowed back onto the property. The mortgage company will now decide what to do with it, he said.

The mortgage companies could not be reached for comment on this story.

Donna Nickerson would not say what the family will do now, but as the night grew dark, a fire was built on the side of the road and several neighbors and friends said they would stick by her.

The family also got long-distance support. Ammon Bundy, an Emmett resident who helped lead the 2016 armed standoff with the federal government in an Oregon wildlife refuge, called for people to respond to the Nickerson ranch.

He posted a video to Facebook on Tuesday afternoon saying the Clearwater County Sheriff’s Office and Idaho State Police had “raided” the Nickersons’ property.

“Please respond,” Bundy told his followers, after giving the Nickersons’ address. “Please spread this message and get as many people as you can there. … I think this warrants our action.”

Bundy has nearly 5,000 friends on Facebook. His father, Cliven Bundy, was involved in the 2014 standoff with the government over grazing rights.

“I do believe that this is a situation that has not been given due process,” Ammon Bundy said in Tuesday’s video, “and that these people truly need our help.”

Hedberg may be contacted at kathyhedberg@gmail.com or 208-983-2326. The Idaho Press contributed to this story.