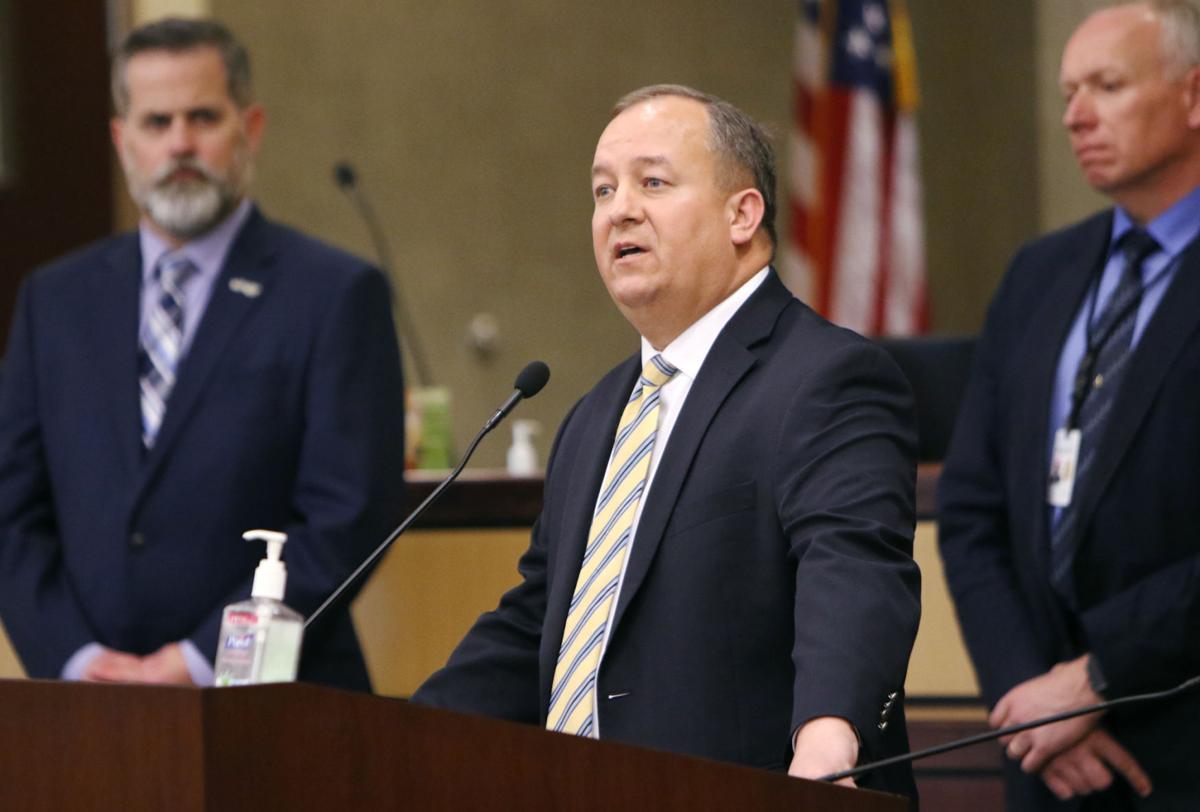 Meridian Mayor Robert Simison announces a social distancing order shutting down all restaurants and bars within the city during a press conference at Meridian City Hall, Friday, March 20, 2020. 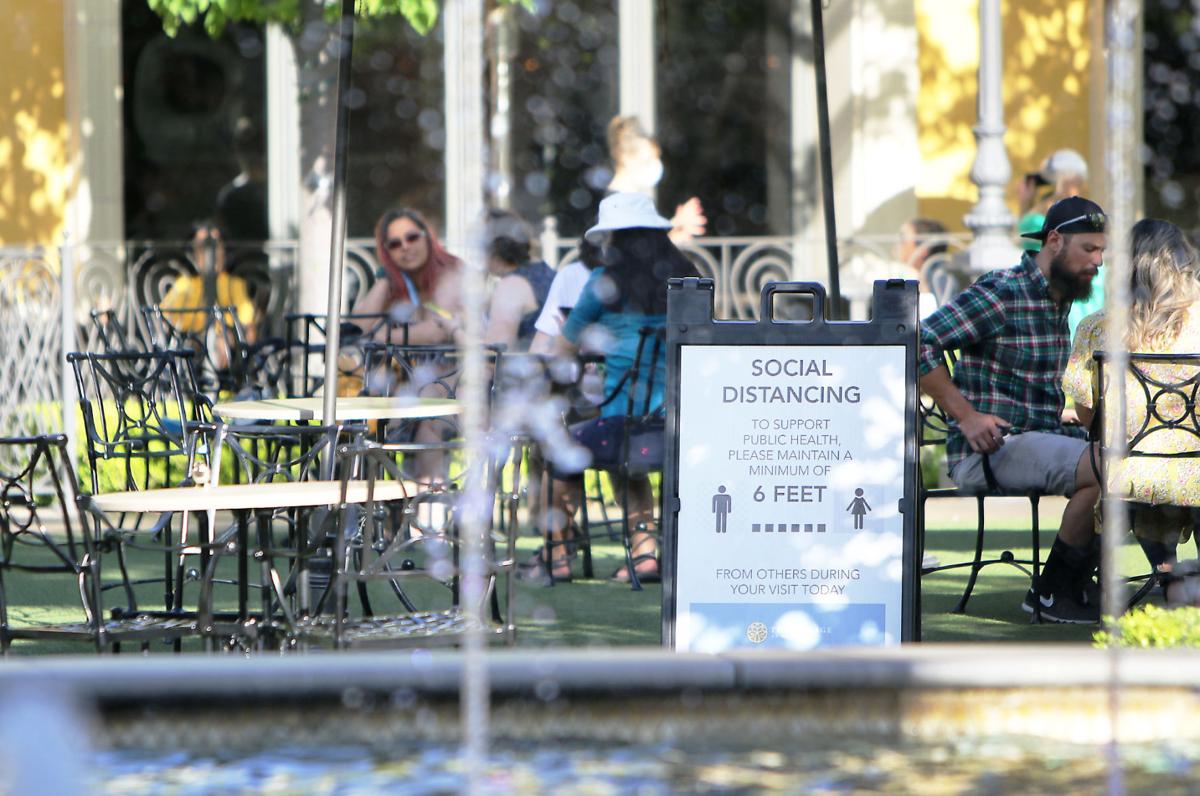 Patrons observe social distancing guidelines as they gather near the fountains in the the courtyard at The Village in Meridian, Tuesday, May 26, 2020. Central District Health on June 22 announced Ada County is moving back to Stage 3 of reopening because of a spike in COVID-19 cases. On July 14, the health district issued a mask mandate for Ada County.

Meridian Mayor Robert Simison announces a social distancing order shutting down all restaurants and bars within the city during a press conference at Meridian City Hall, Friday, March 20, 2020.

Patrons observe social distancing guidelines as they gather near the fountains in the the courtyard at The Village in Meridian, Tuesday, May 26, 2020. Central District Health on June 22 announced Ada County is moving back to Stage 3 of reopening because of a spike in COVID-19 cases. On July 14, the health district issued a mask mandate for Ada County.

BOISE — Face coverings are now required to be worn in public in Ada County, including within city limits, after Central District Health’s Board of Public Health on Tuesday issued a mask mandate.

The mandate is part of the district’s existing public health order that moved the county back to Stage 3 of reopening. The mandate requires people to wear a face covering over their nose and mouth in public places where they can’t maintain 6 feet of distance, the health district said in a news release, with some exceptions.

Boise County Commissioner Ryan Stirm said the board members were in “a really tough spot” and that they would be “strung up” by the public whether they chose to mandate masks or not. Stirm voted in favor of the mask mandate along with Dr. Ted Epperly, a family practice physician from Ada County; Diana Lachiondo, an Ada County commissioner; Dr. Jane Young, a family nurse practitioner from Ada County; and Elt Hasbrouck, a Valley County commissioner.

Blanksma argued the board should focus on education and outreach, to teach people how to avoid the virus, rather than a mask mandate “that doesn’t necessarily have an effective end because it doesn’t get enforced.”

“If we’re going to set a policy as a board, I think we need to make sure that it’s meaningful and we know what results we expect and how we’re going to get there,” Blanksma said. “I know that enforcement in my own county would be difficult and isn’t necessarily public-supported.”

Lachiondo responded that she has inquired about mask-wearing with people in Ada County cities, including Boise, where Mayor Lauren McLean recently ordered mandatory masks in public. “There is a significant difference in adherence in Boise versus the rest of the county,” Lachiondo said, suggesting that more Boiseans are wearing masks because of McLean’s order.

Many managers of local businesses won’t require employees to wear masks until the government says they have to, Lachiando said, and business owners “don’t feel protected if they’re the one requiring masks.”

Wearing masks can stop 85% of transmissions of the disease, Dr. Steven Nemerson, Saint Alphonsus chief clinical officer, said earlier Tuesday during a press conference held by leaders of local health systems, who are calling for a statewide mask mandate. Gov. Brad Little’s office said he has no plans to issue one.

Ada County comprises 27% of the state’s population and 39% of its total coronavirus cases. The county is seeing increases of at least 100 cases per day for a total of 4,540 cases and 25 related deaths as of Tuesday evening, according to Central District Health.

Central District Health also covers Boise, Elmore, and Valley counties, but the order only applies to Ada County. During Tuesday’s meeting, the board discussed the possibility of extending the order to Valley and Boise counties in the future, according to BoiseDev.

ENFORCEMENT: ‘IT’S NOT GOING TO HAPPEN’Violators of the health district order could face a misdemeanor charge punishable by a fine, imprisonment, or both.

Tracy Basterrechea, deputy chief for the Meridian Police Department, said at a Tuesday Meridian City Council meeting his department would prefer the penalty for not wearing a mask were an infraction rather than misdemeanor.

The courts already are overcrowded due to COVID-19, Basterrechea said. He also warned, if the city chose to strictly enforce the ordinance, they should prepare to be “inundated” with “hate emails and Facebook posts,” similar to the criticism his department received following multiple protests to the governor’s stay-home order in Meridian, one of which led to an arrest.

“Ask yourself, ‘How willing are you as a council to take that heat as well?’” he said. “We’re used to that. I don’t know that you are all quite used to that, but it would be coming.”

Enforcement by Meridian police should be similar to the way it handled the city’s hands-free driving ordinance, Basterrechea said. Last year, Meridian banned the use of hand-held electronic devices while driving. Rather than immediately issuing citations, Meridian police instituted a two-month education period when officers issued warnings.

City Council President Treg Bernt said he “highly” doubts the Meridian Police Department is “going to be out and about writing citations” for violating Central District health’s mask order.

“It’s not going to happen,” Bernt said. “It’s going to be very difficult to enforce something that’s unenforceable.”

The mask mandate: Every person in Ada County is required to wear a face covering that completely covers the person’s nose and mouth when the person is in a public place and others are present and physical distancing of 6 feet cannot be maintained.

Public place: Any place open to all members of the public without specific invitation, including but not necessarily limited to, retail, business establishments, government offices, medical, educational, arts and recreational institutions, public transportation, including taxi cabs and ridesharing vehicles, outdoor public areas, including, but not limited to public parks, trails, streets, sidewalks, lines for entry, exit, or service, when a distance of at least 6 feet cannot be maintained from any non-household member.

Exemptions: Facial coverings are not required to be worn under the following circumstances:

· Children under the age of 2.

· Persons, including on-duty law enforcement officers, for whom wearing a face covering would create a risk to the person related to their work, as determined by local, state, or federal regulators or workplace safety guidelines.

· Persons who are obtaining a service involving the nose, face, or head for which temporary removal of the face covering is necessary to perform the service.

· Persons who are eating or drinking at a restaurant or other establishment that offers food or beverage service, so long as they engage in physical distancing.

The revised order and daily coronavirus updates from Central District Health are available at cdh.idaho.gov.

The July 14 Board of Health meeting can be viewed on the Central District Health - CDH YouTube page.

Ahead of Tuesday’s Central District Health board meeting, Meridian Mayor Robert Simison released a written statement in support of a countywide mask mandate.

“A countywide approach will better safeguard the overall health of our community rather than a city-by-city approach,” he wrote.

Simison said it’s “unfortunate” that the mask debate “has become political,” and the mandate is a “practical effort to protect our vulnerable populations and community.”

“I fully support the practice of wearing masks in public spaces where physical distancing cannot be maintained as it is a small effort each of us can take to have a big impact on the health of residents and to keep our businesses open,” he wrote. “Ultimately, each individual needs to make a decision about the use of masks and their social responsibility to the community’s health.”

At Tuesday’s city council meeting Councilwoman Liz Strader suggested the city of Meridian pass an ordinance to require masks but enforce the order with an infraction rather than a misdemeanor.

“If Meridian were to support compliance, it would actually help the effort to get people to wear their masks, and I think it would provide a more efficient enforcement mechanism, hopefully one that started with education first by the Meridian police department,” Strader said.

Councilman Luke Cavener suggested the council hold a special meeting later in the week to discuss such an ordinance. After some discussion about how to legally notice the special meeting, the Tuesday gathering abruptly ended without a decision by council.

Simison said he would speak to Bernt about holding a special meeting, and council members voted 4-2 to adjourn, with Strader and Cavener opposing the motion.

#Breaking – Central District Health passes a mandatory mask order specific to Ada County. Board wanted to target Ada County and the outbreak there. Specific order is that people wear a face covering over nose and mouth in situations they cannot social distance in public