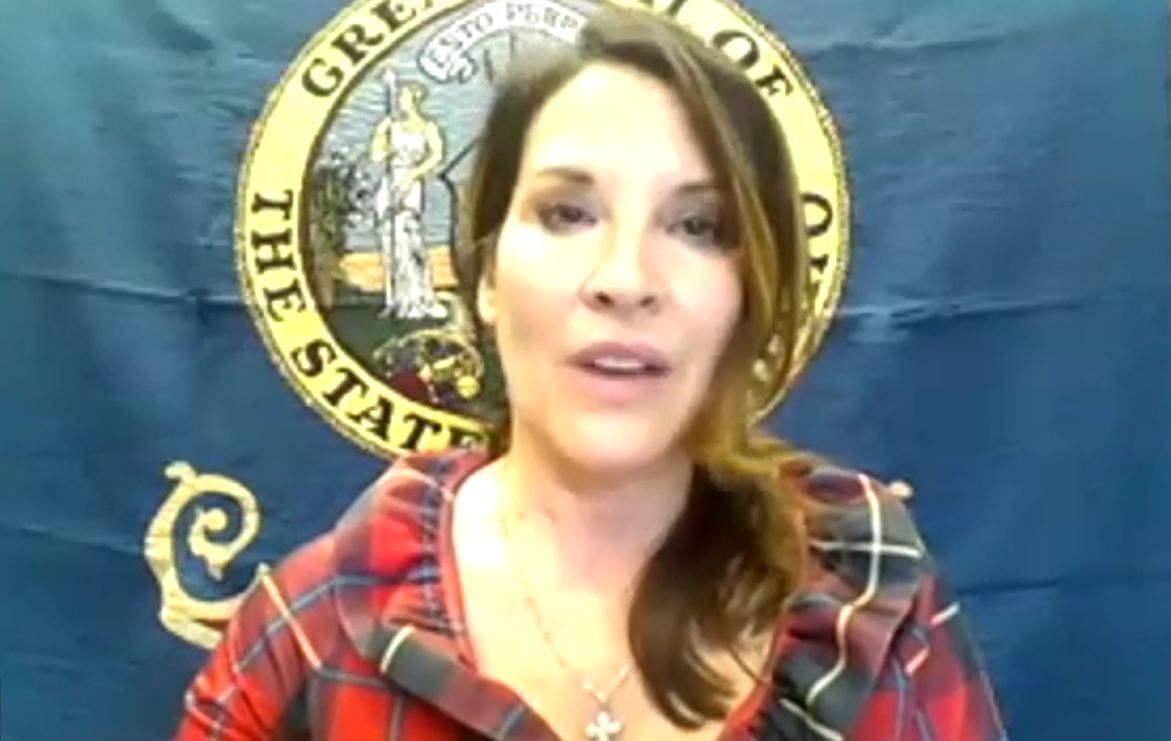 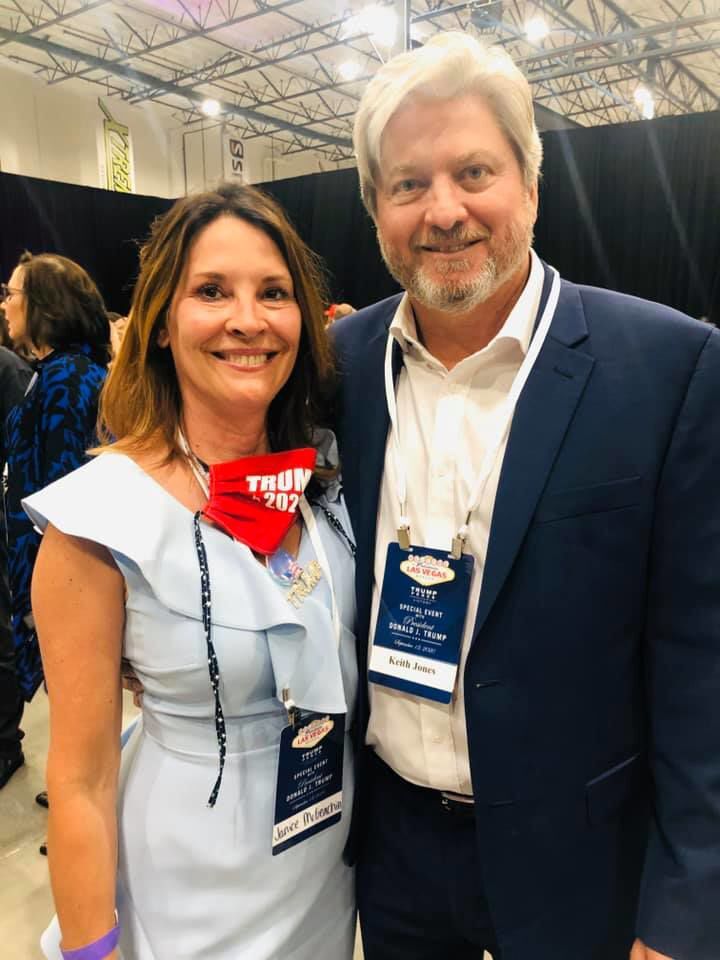 Idaho Lt. Gov. Janice McGeachin posted this photo on Facebook of herself at a big rally for President Donald Trump on Sept. 13 at Xtreme Manufacturing in Henderson, Nevada; the company was fined for violating local COVID-19 restrictions by holding the packed rally. McGeachin has now proposed that Idaho purchase millions of the company’s products, including walk-thru disinfecting cubes. 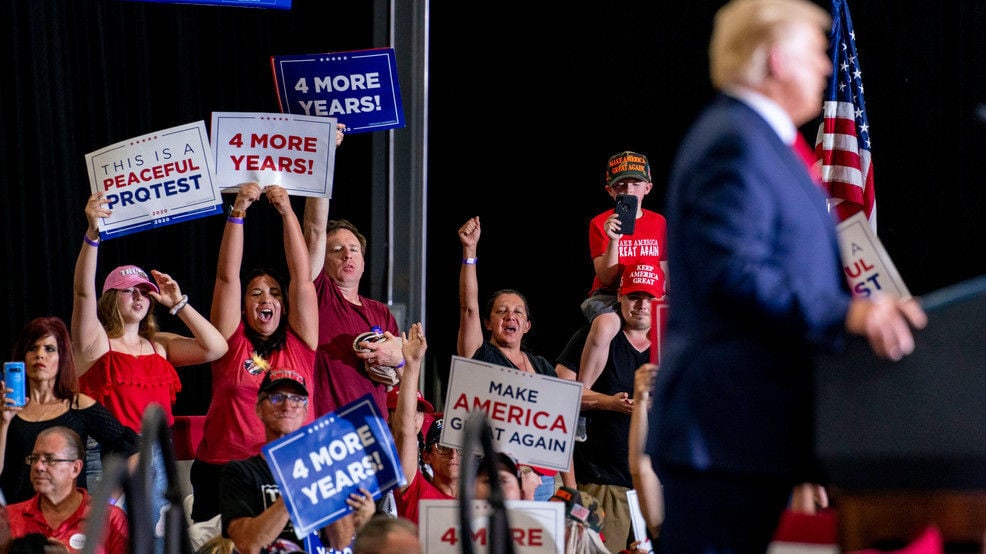 Idaho Lt. Gov. Janice McGeachin posted this photo on Facebook of herself at a big rally for President Donald Trump on Sept. 13 at Xtreme Manufacturing in Henderson, Nevada; the company was fined for violating local COVID-19 restrictions by holding the packed rally. McGeachin has now proposed that Idaho purchase millions of the company’s products, including walk-thru disinfecting cubes.

BOISE — Idaho Lt. Gov. Janice McGeachin on Tuesday touted a proposal she’s crafted to funnel millions of the state’s CARES Act funds to a Nevada company for technology including “walk-through disinfectant cubes” to be installed at the state Capitol.

McGeachin, who held a statewide virtual press conference with pastors and business owners around the state to decry current Gov. Brad Little’s coronavirus response and call for Idahoans to gather to celebrate Thanksgiving with “courage,” said with “very high-tech equipment” manufactured by Xtreme Cubes Corp. in Henderson, Nev., “A person can walk through a cube and be disinfected from head to toe, including on the bottom of their feet.”

McGeachin’s technological solution, which she touted as allowing for a safe in-person Idaho legislative session amid the pandemic, has been widely discredited. According to the National Institutes of Health, a June study published in the American Journal of Tropical Medicine and Hygiene found “walk-through sanitation gates” ineffective and potentially dangerous, noting that the practice violates World Health Organization standards. “Fumigation is meant for inanimate objects and surfaces, and it should never be used on people,” the study said.

A May study published by the Royal Society for Public Health, also cited by the National Institutes of Health, said “disinfection tunnels” or “sanitization tunnels” initially were used in China, but proved to be both dangerous and useless for preventing the spread of COVID-19, which spreads through exhaled and inhaled droplets.

The Nevada company also manufactures “relocatable, modular facilities” that McGeachin is proposing Idaho buy for use as emergency room overflow, intensive care units or isolation units. After their use, the three units, on which she proposed spending $8 million, could be “then repurposed for a different cause down the road,” the lieutenant governor said.

McGeachin’s proposal also calls for spending $34,000 for four of the company’s “Xtreme Mobile Air Disinfection System” for use in the state Capitol; $25,500 for three of its air disinfection systems for the proposed mobile units; and $8.64 million to hire 108 nurses to staff the three new mobile units, which would be placed in three different regions of the state.

“There are so many ways that we can help others, but we can’t give of our talents when we keep ourselves from others,” McGeachin declared. “The message we keep hearing in our communities in Idaho and across the country is that we should stay away from each other, and this is so unnatural for us as human beings.”

Xtreme Manufacturing, which is co-located and shares ownership with Xtreme Cubes Corp., is owned by Las Vegas hotel owner Don Ahern, who hosted a big Trump campaign rally at the firms' Henderson, Nevada, plant on Sept. 13 that McGeachin attended; she posted multiple photos from the rally on Facebook. Ahern was fined by the city of Henderson for holding the packed rally in violation of the local COVID-19 gathering restrictions.

McGeachin’s proposal comes to a total of $16.8 million, including $80,000 for two walk-through “Xtreme Opti-Clean Cubes” to be stationed at the entries to the east and west wings of the state Capitol. She submitted it to Gov. Brad Little’s Coronavirus Financial Advisory Committee late last week, but it hasn’t been added to the agenda for CFAC’s upcoming Wednesday meeting.

Emails obtained under the Idaho Public Records Act show that due diligence so far has included consultation with Dr. Carolyn Bridges, a member of the governor’s Coronavirus Working Group and retired CDC official. In a Saturday email to Adams, Bridges wrote that she agrees with studies that have found walk-through disinfecting technology ineffective for slowing COVID-19 spread. “COVID-19 is a respiratory disease spread mostly through coughing, talking, breathing, and sneezing of infected persons. This tunnel does nothing for the source of infection which is the respiratory tract,” she wrote. “Disinfectants are not meant to be inhaled and can cause damage to skin and the respiratory tract. There is no data to support use in terms of effectiveness.”

Xtreme Cubes Corp. maintains its disinfectant, HOCL, is safe on skin. The product is registered as a surface disinfectant that kills COVID-19 with the EPA. The EPA’s registration website notes, “These products are for use on surfaces, NOT humans.” The company its cubes use a lower concentration of HOCL that is safe on skin.

Wednesday’s CFAC agenda includes a $5 million proposal from the state Department of Health & Welfare to fund contract respiratory therapists and nurses for Idaho hospitals through the end of December as the state’s COVID-19 cases continue to swell and hospitals face staffing shortages; and another $300,000 proposal to train providers to administer the new COVID-19 vaccine when it becomes available in Idaho.

Idaho hospitals, increasingly overwhelmed with COVID-19 patients, have been struggling with increasing costs and decreasing availability for those traveling health care providers.

Brian Whitlock, president and CEO of the Idaho Hospital Association, said the $5 million contract staffing proposal, which would access the staffers through temporary staffing agencies, could be key to keeping Idaho hospitals from having to ration care as they move into December.

“As we look at the data around the state, we see a high incidence and high positivity rates particularly around the college towns,” Whitlock said. “And those kids are all going home this week. And they feel fine, but they may be infected. And if they take that home to families where you have vulnerable people, that complicates things.”

McGeachin joined several restaurant owners and pastors from around the state for Tuesday’s press conference. They joined her in decrying “lockdowns” and called for COVID-19-related restrictions to be lifted. Idaho’s current modified Stage 2 restrictions don’t require any Idaho businesses to close, and they exempt churches from limits on gatherings.

“Individuals ought to be able to decide how much they want to safeguard themselves against sickness, how much they want to isolate, what protection do they want to wear,” said Joel Cohen, a restaurant owner from Moscow. “If we forfeit these freedoms, the cure has actually become worse than the disease.” He said he’ll resist any requirements for social distancing within his restaurant.

A Moscow independent physician, Dr. Rod Story, joined the group and agreed, saying he recovered from COVID-19 and most will. “Life is much more than hiding in our homes,” he said. “True health means relationships, it means face-to-face connections, it means gatherings even if there’s risk involved.”

Idaho and national health officials in both the private and public sectors have strongly cautioned people to avoid gathering for the holidays this year with people outside their own households, due to the continuing and rising spread of the virus. So far it has claimed the lives of more than 259,000 Americans and 874 Idahoans.

This story has been updated to reflect the location and relationship between Xtreme Cubes Corp. and Xtreme Manufacturing.