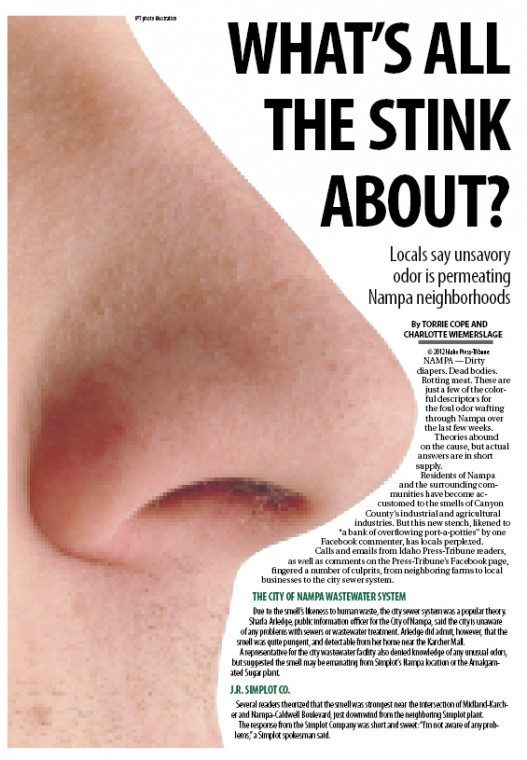 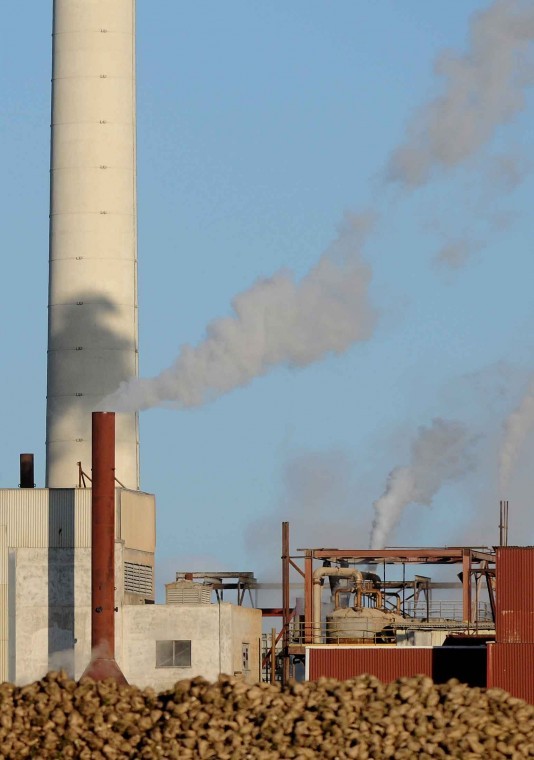 Plant officials with Amalgamated Sugar say they’ve invested $300,000 last year on aerators to reduce the smell of the flume water released into the plant’s retention pond. The flume water is used to transport sugar beets.

Plant officials with Amalgamated Sugar say they’ve invested $300,000 last year on aerators to reduce the smell of the flume water released into the plant’s retention pond. The flume water is used to transport sugar beets.

NAMPA — Dirty diapers. Dead bodies. Rotting meat. These are just a few of the colorful descriptors for the foul odor wafting through Nampa over the last few weeks.

Theories abound on the cause, but actual answers are in short supply.

Residents of Nampa and the surrounding communities have become accustomed to the smells of Canyon County’s industrial and agricultural industries. But this new stench, likened to “a bank of overflowing port-a-potties” by one Facebook commenter, has locals perplexed.

Calls and emails from Idaho Press-Tribune readers, as well as comments on the Press-Tribune’s Facebook page, fingered a number of culprits, from neighboring farms to local businesses to the city sewer system.

THE CITY OF NAMPA WASTEWATER SYSTEM

Due to the smell’s likeness to human waste, the city sewer system was a popular theory.

Sharla Arledge, public information officer for the City of Nampa, said the city is unaware of any problems with sewers or wastewater treatment. Arledge did admit, however, that the smell was quite pungent, and detectable from her home near the Karcher Mall.

A representative for the city wastewater facility also denied knowledge of any unusual odors, but suggested the smell may be emanating from Simplot’s Nampa location or the Amalgamated Sugar plant.

Several readers theorized that the smell was strongest near the intersection of Midland-Karcher and Nampa-Caldwell Boulevard, just downwind from the neighboring Simplot plant.

The response from the Simplot Company was short and sweet: “I’m not aware of any problems,” a Simplot spokesman said.

Another popular suggestion was the Amalgamated Sugar plant. Though the facility has supported countless Canyon County families over the years, the smell associated with refining sugar beets has annoyed the community on more than one occasion.

“It is an agricultural facility and unfortunately it can smell,” plant manager Eric Erickson said. “ … Everybody does not like that foul smell for sure.”

The plant takes that smell seriously and has invested millions into reducing its odor emissions.

Erickson said the plant invested an additional $300,000 last year on “state of the art,” 900-horse power flume aerators. The aerators work to reduce the smell of the flume water, used to transport the sugar beets, that is released into a treatment pond. Along with the aerators, the plant also operates with one- third less flume water, and Erickson said that has been working well.

“We had less (odor) complaints this year than we have ever had,” he said.

So far, the Department of Environmental Quality has only received one complaint about the smell, but no details to nose down a culprit.

“We don’t have the time or the resources to go and sniff around the entire town to locate the source of the smell,” Todd Crutcher, DEQ’s engineering manager, said.

If someone wants something to be done about the smell, they need to be specific about the location where it is coming from he said.

DEQ inspectors are trained to determine the strength of an odor, regardless of how pleasant it is or not.

“If a facility has an odor that is considered strong enough then DEQ can require them to write and implement an odor management plan,” Dave Luft, airshed manager for the DEQ, said.

He said it is getting to be the time of the season when DEQ starts to get complaints about smells. Luft explained that smells tend be stronger in the evening as things cool and the air gets heavier.