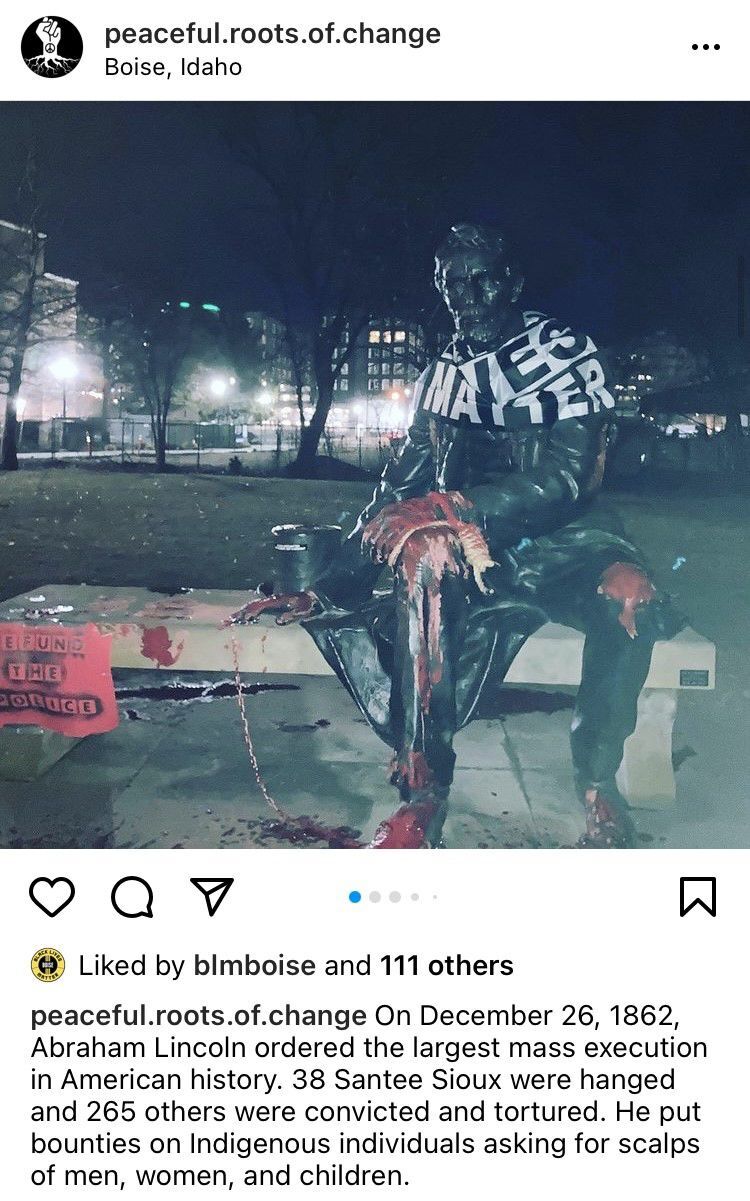 Activists defaced a statue of President Abraham Lincoln at Julia Davis Park, using temporary chalk-paint, according to an organizer, then posted the display on social media.

The “Seated Lincoln” statue is in Boise’s Julia Davis Park. 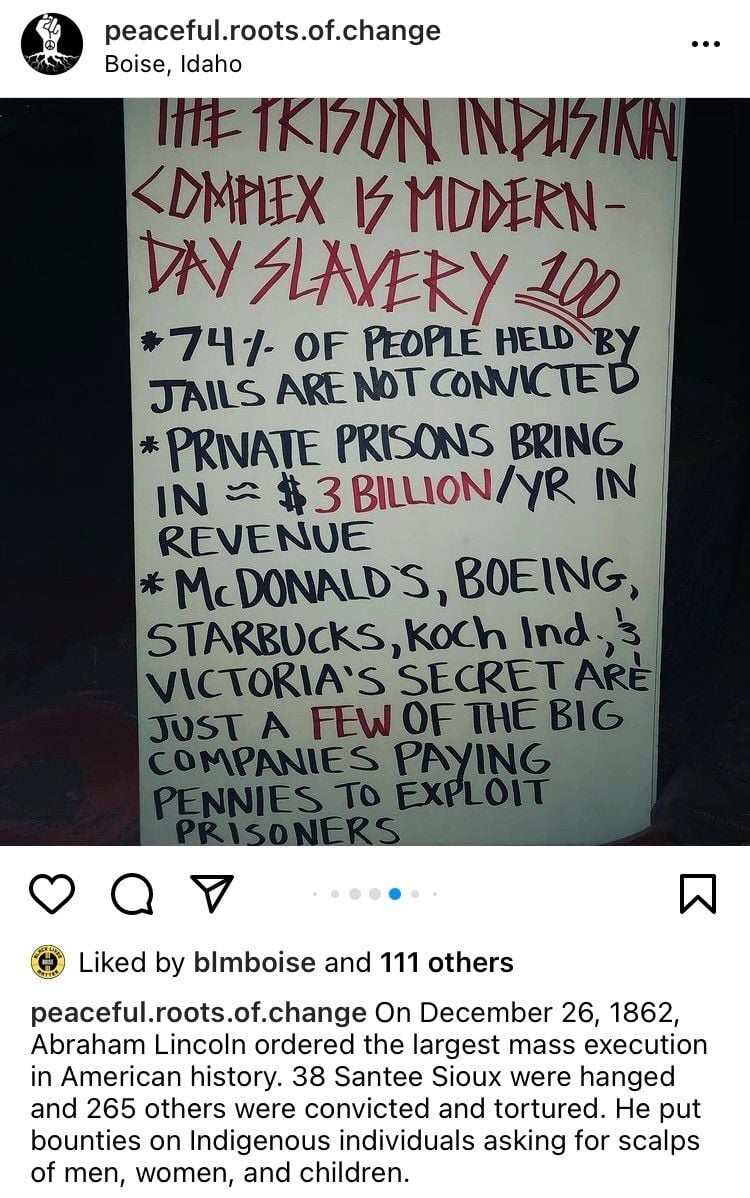 The “Seated Lincoln” statue is in Boise’s Julia Davis Park.

BOISE — On Monday morning, the bronze statue of President Abraham Lincoln in Julia Davis Park was defaced, temporarily. A red substance — meant to signify blood — was smeared across the effigy of the 16th president of the United States.

Police responded to report of vandalism at the “Seated Lincoln” statue at 8 a.m. A short time later, Boise Parks and Recreation crews cleaned up “paint, feces and signs” on or near the statue, the Boise Police Department said in a news release. The statue sustained no permanent damage.

In statements released Monday afternoon, Boise Mayor Lauren McLean called the vandalism “a terrible act,” and Police Chief Ryan Lee said, “Defacing a venerated object to provoke an emotional response will not help us rise to our better selves.”

The people responsible — one of whom spoke to the Idaho Press Monday evening — say it was a temporary political display, meant to raise awareness on the first day of Black History Month of “history that is being omitted,” particularly Lincoln’s treatment of Indigenous and Black people.

The paint was made of non-toxic, biodegradable chalk, which “washes away easy as can be,” said Samantha Hager of Peaceful Roots of Change, a local advocacy group. Peaceful Roots of Change organized the Lincoln display along with two other groups, Black Lives Matter Boise and Antifa Boise, Hager said. The stunt was planned for about a month, she said.

Regarding the police department’s report of feces as part of the vandalism, Hager said, “We didn’t put that there.”

“No one did that,” she said. “… When we saw pictures of the feces they’re claiming we put there, it’s dog poop. It’s on a walking trail; people bring their dogs there all the time.”

Photos and videos of the display circulated online Monday. The statue, located near the Idaho Black History Museum, was wrapped in a Black Lives Matter flag. Signs positioned near the statue said “defund the police” and called for an end to the “prison industrial complex,” a form of “modern-day slavery.” Another sign accused “honest Abe” of ordering the execution of 38 Santee Sioux, a reference to the 1862 execution of 38 Native Americans by the U.S. Government in Minnesota. Lincoln signed off on the execution of 39 of the 303 Dakota warriors convicted by a military commission of perpetrating massacres during the Dakota War of 1862; 38 of those men were hanged.

“The reason that we targeted the Lincoln statue is that it’s the first day of Black History Month, and he’s the one who ordered the largest mass execution in American history, the Dakota 38,” Hager said. “It’s definitely not one of the most prevalent pieces of history that you’ll see in a lot of history books, but it is something that happened. A lot of us that are involved in this, we are teachers, we are professors or we have studied history or we’re political activists, and we know this information, and we want to share it with the public.”

Hager also said Lincoln himself owned slaves. He did not, according to scholar Gerald Prokopowicz, who wrote a book about common misconceptions about Lincoln.

In McLean’s statement earlier on Monday, she said: “At a time when our democracy is fragile, this is particularly disturbing as President Lincoln sought to keep our fractured nation together and to address the scourge of slavery — losing his life for it. On the first day of Black History month, it’s essential to honor those in our community, reflect on our past, and work together for a better future. This terrible act detracts from progress and is an affront to those who toil daily for civil rights.”

The Boise Police Department said officers are following up on leads and continuing to investigate. Their investigation includes evidence shared on social media, according to the release.

Editor's Note: In an earlier version of this story, the Idaho Press reported mischaracterizations of conversations between legal groups and the activists involved with vandalizing the Seated Lincoln statue in Julia Davis Park. Samantha Hager — one of the activists involved with the group — later told the Idaho Press that the group did not discuss its plans with the American Civil Liberties Union and the National Lawyers Guild. This story has been updated to reflect that new information.