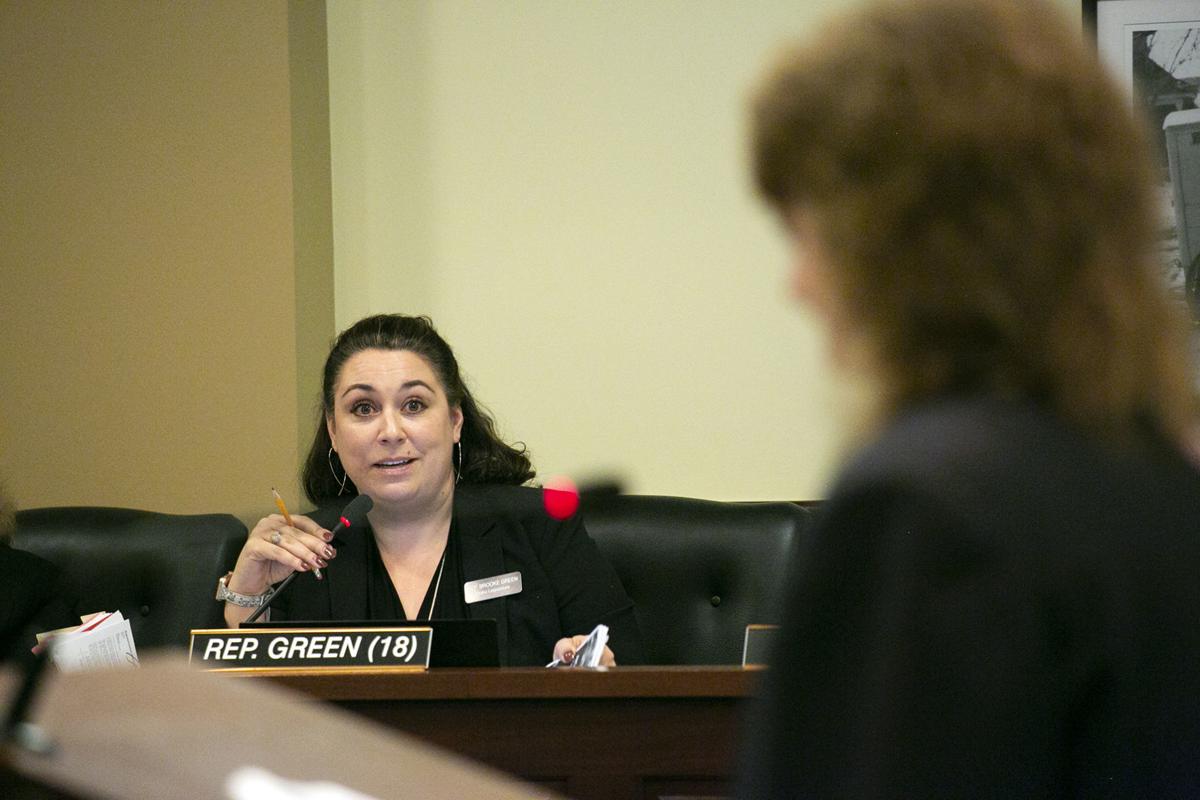 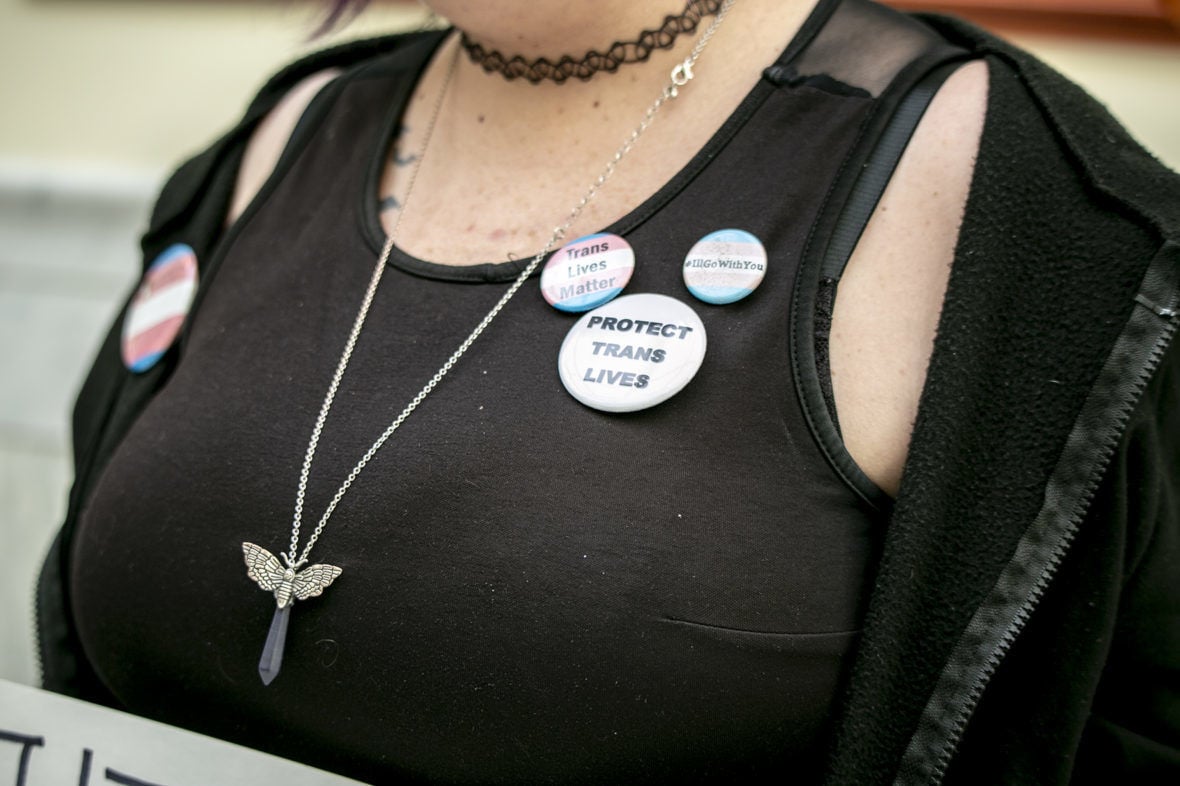 Josie Kohler, the parent of a transgender daughter, wore “protect trans lives” and “trans lives matter” to a Wednesday hearing where Rep. Barbara Ehardt presented her bill that would limit transgender women and girls’ participation in sports. 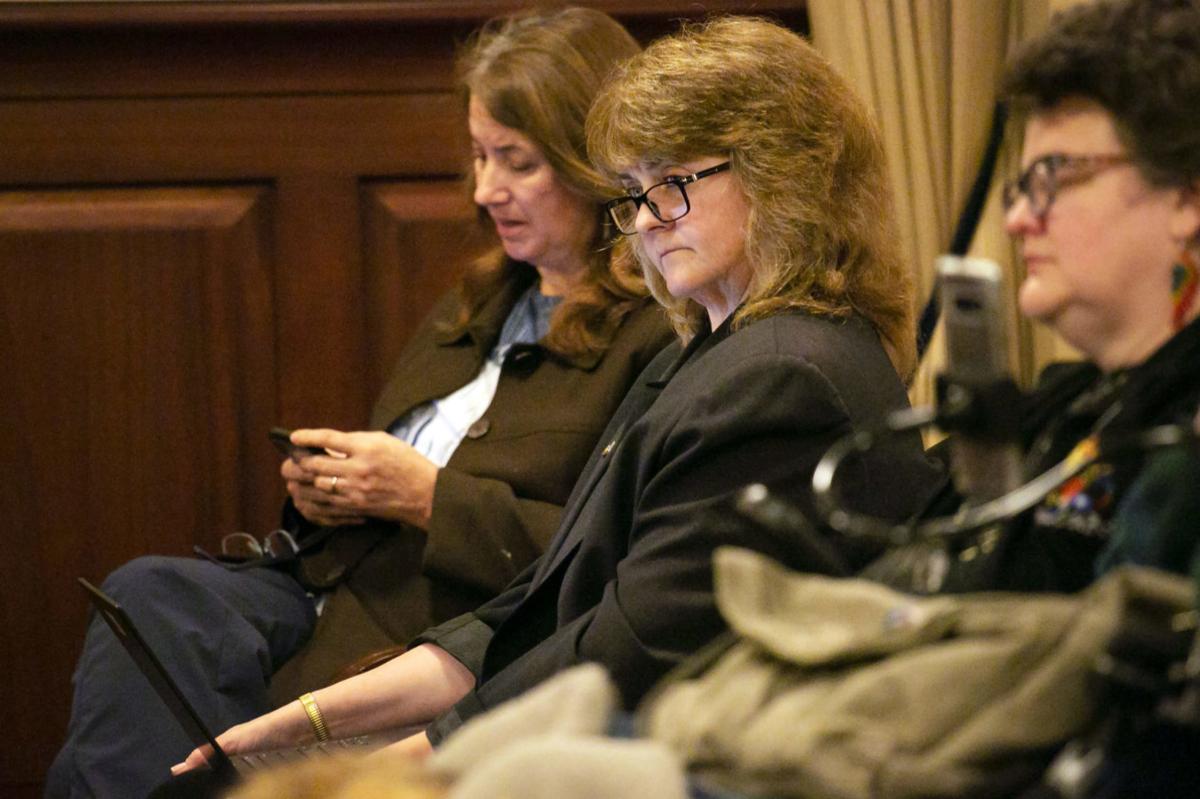 Rep. Barbara Ehardt listens to testimony Wednesday on her bill that would limit transgender women’s ability to participate in sports.

Josie Kohler, the parent of a transgender daughter, wore “protect trans lives” and “trans lives matter” to a Wednesday hearing where Rep. Barbara Ehardt presented her bill that would limit transgender women and girls’ participation in sports.

Rep. Barbara Ehardt listens to testimony Wednesday on her bill that would limit transgender women’s ability to participate in sports.

BOISE — Supporters called it a matter of fairness. Opponents called it “government-ordered discrimination” and “state-sanctioned exploitation.”

Restricting transgender girls and women from playing in school sports could subject young people to invasive physical exams, innuendo and bullying and outing, said the opponents.

“How many lives need to be harmed or lost?” asked Jen Moore, a licensed professional counselor.

Forcing girls and women to compete against, and lose to, boys and men could drive female athletes to take their lives, said Brian Stutzman, an Idaho Falls father. “To allow XYers to play in an XX world is not fair to either group,” said Stutzman, referring to the chromosomal differences between the genders.

After 90 minutes of emotional testimony, lawmakers took no action Wednesday. The House State Affairs Committee will take up the transgender athletics bill again Thursday, and could vote.

House Bill 500 — which sponsors have titled it “Fairness in Women’s Sports Act” — would ban transgender girls and women from competing in girls’ and women’s sports. Rep. Barbara Ehardt, the bill’s House sponsor, said her bill followed the spirit of Title IX, the landmark federal policy that opened intercollegiate athletics to female athletes.

Sen. Mary Souza, HB 500’s co-sponsor and a critical care nurse, focused on physiology. Men have denser and stronger bones, tendons and ligaments and greater lung capacity. While the female pelvis is shaped for delivering a child, the male pelvis is shaped differently — which gives boys and men an inherent advantage in track.

The balance of testimony came from opponents — who focused on the emotional toll HB 500 could exact.

One speaker read testimony on behalf of Chris Mosier, a Chicago-based transgender triathlete. In his testimony, Mosier challenged the notion that anyone would change gender simply to dominate in athletics. “We need to call this bill what it is: a dangerous attack on young people.”

Oliver Cowan, a Boisean who began his gender transition at age 23, disputed the notion that people change genders casually or quickly. “That just isn’t how it works.” The transition is long and difficult, he said, and denying students the ability to play in sports would only complicate the process.

“Transgender students already live and go to school in Idaho,” said Kathy Griesmyer, ACLU Idaho policy director. “They should have the same chances to succeed and thrive.”

Griesmyer said her group will sue if HB 500 passes — saying the bill is discriminatory and represents an invasion of student privacy.

Committee members had pointed questions Wednesday, which could signal their leanings as a committee vote looms.

“I’m curious as to how you would define a woman,” Rep. Julianne Young, R-Blackfoot, asked Griesmyer.

Rep. Heather Scott, R-Blanchard, asked Griesmyer if the ACLU had considered the science of the issue when it reviewed HB 500. Griesmyer said her group focuses on legal and constitutional issues.

Other questions focused on the physician’s examination that would be used to determine gender. Rep. Elaine Smith, D-Pocatello, asked Ehardt if students would be subject to pelvic examinations; Ehardt said the process would glean information from non-invasive blood and urine samples. Rep. Brent Crane, R-Nampa, asked whether student-athletes already have to get a physical before competing. They do.

Rep. Brooke Green, D-Boise, questioned whether HB 500 is needed in the first place. She asked Ehardt if anyone has ever challenged an Idaho student-athlete’s eligibility, based on gender.

“At this point, that has not happened, but it is just around the corner,” Ehardt said.

HB 500 is one of several bills on transgender policy before the Legislature this year. Ultimately, the last word on any of these bills belongs to Gov. Brad Little.

Meeting with reporters at an Idaho Press Club breakfast Wednesday morning, Little suggested the transgender bills might relate more to national trends than anything taking place in Idaho. He said he hasn’t seen the bills and did not tip his hand, but added, “I’m not a big discrimination guy.”