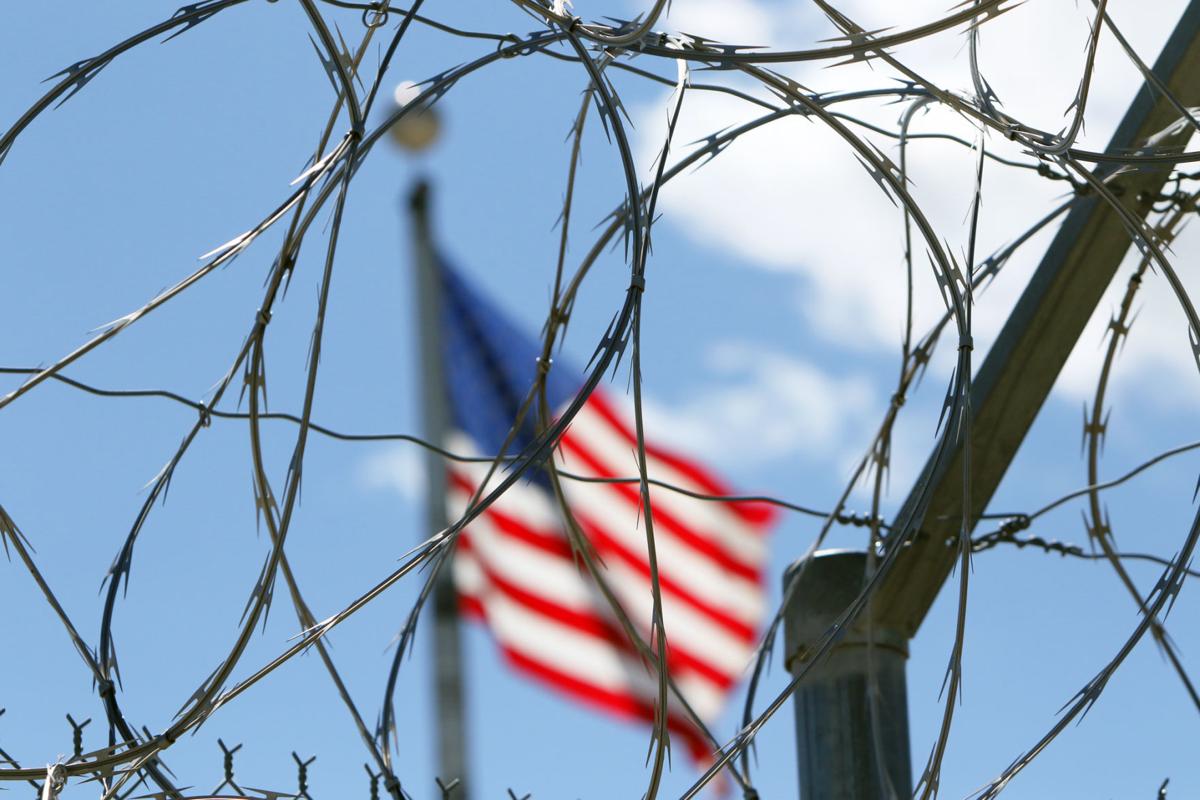 An American flag floats in a gentle breeze above the razor wire at the Idaho State Correctional Center, Thursday, July 18. 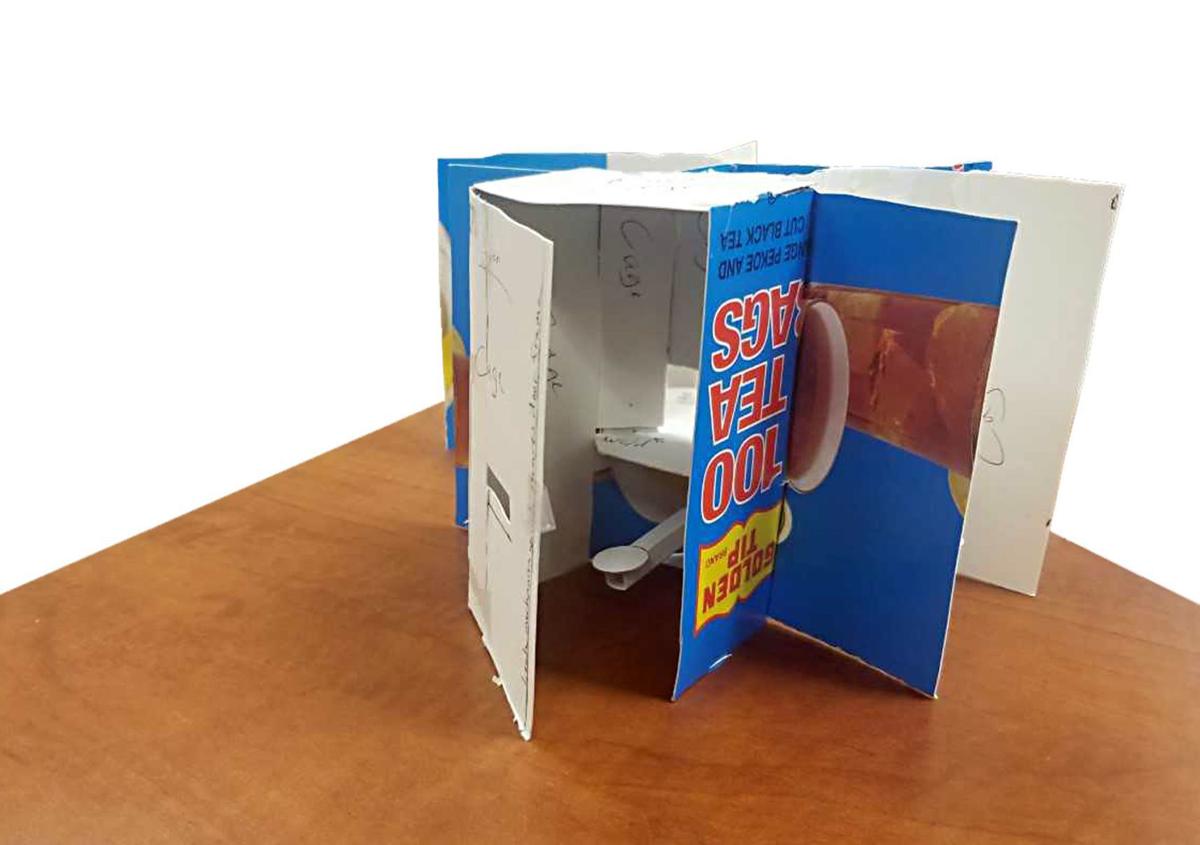 In this file photo from 2016, then Idaho Maximum Security Institution Warden Al Ramirez stands in one of the long-term segregation cells at the Kuna prison. 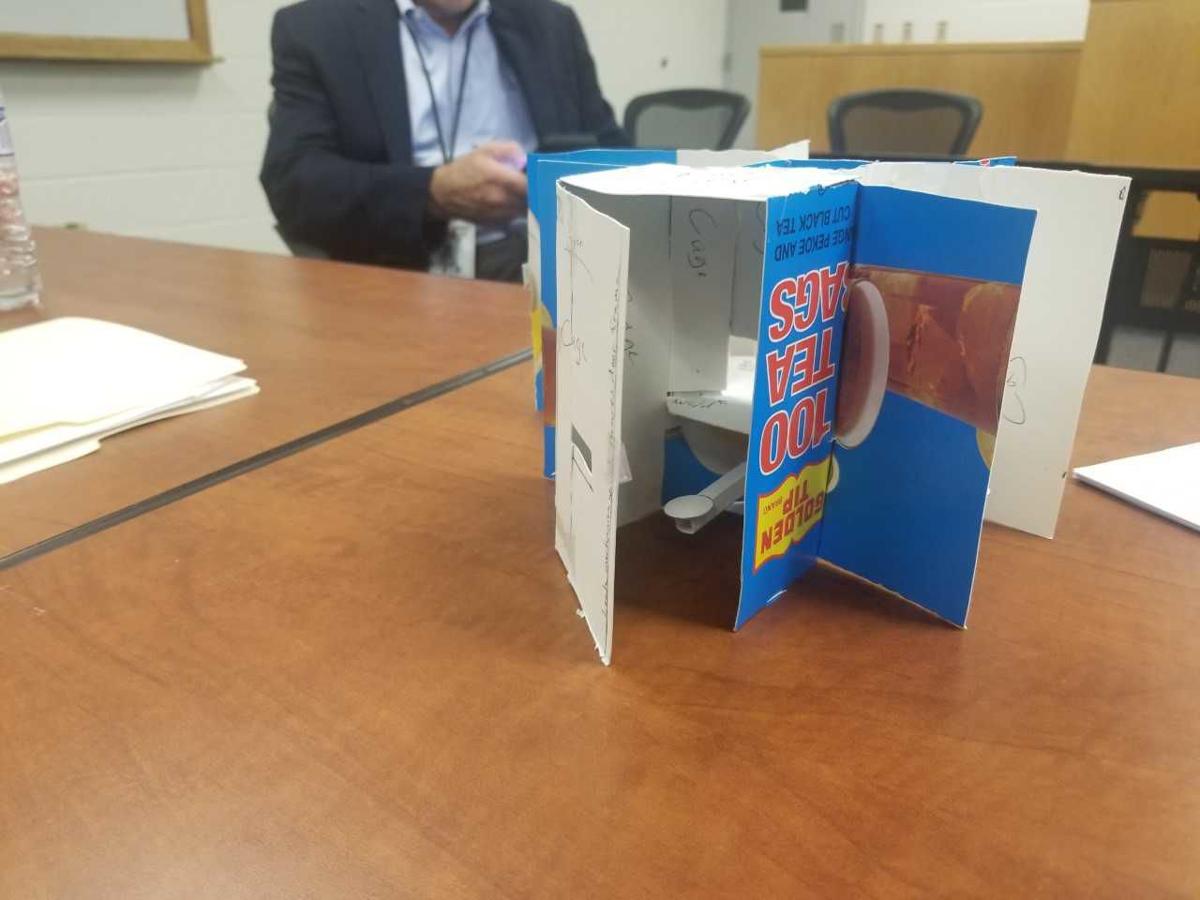 The model, constructed by an inmate, sits on a table at the Idaho Maximum Security Institution, July 16, 2019. 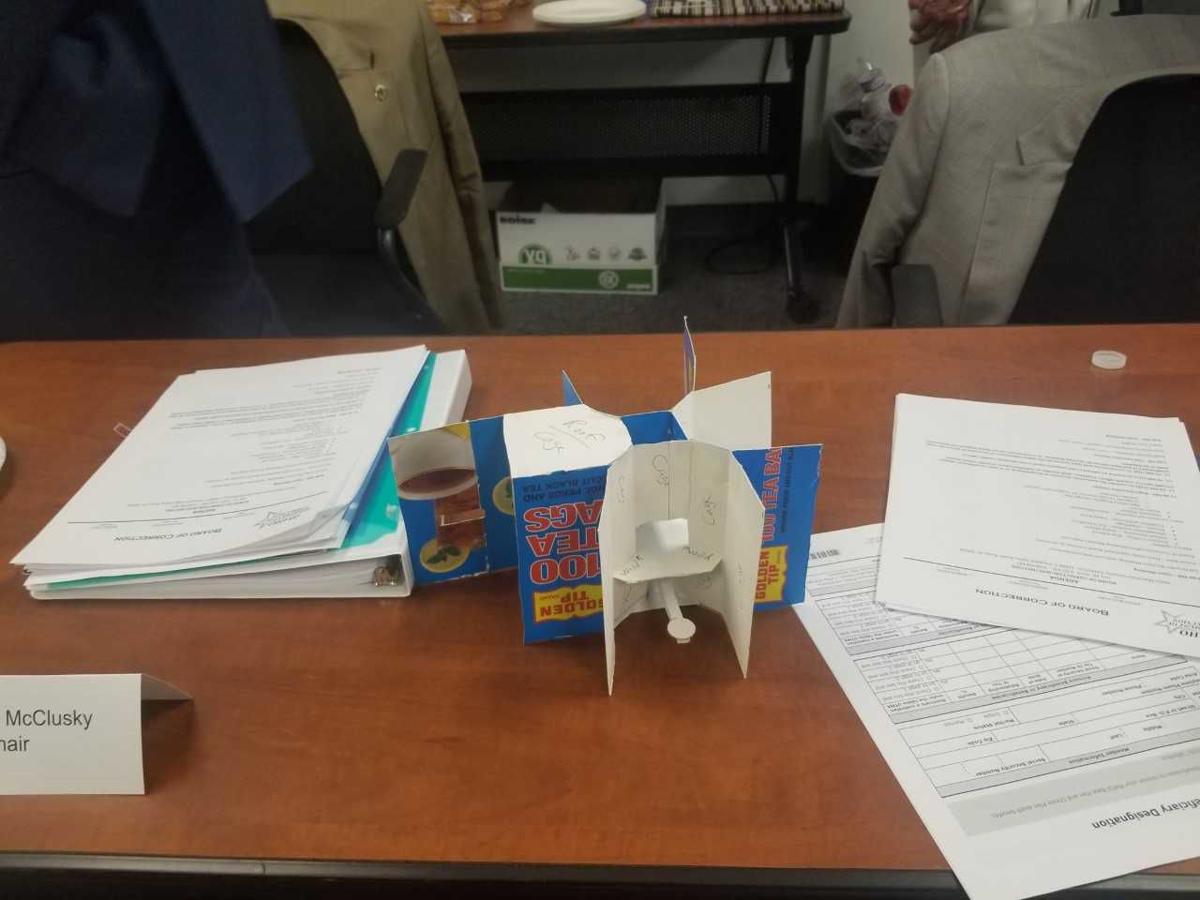 The model, designed by an inmate, sits on a table at the Idaho Maximum Security Institution, July 16, 2019. 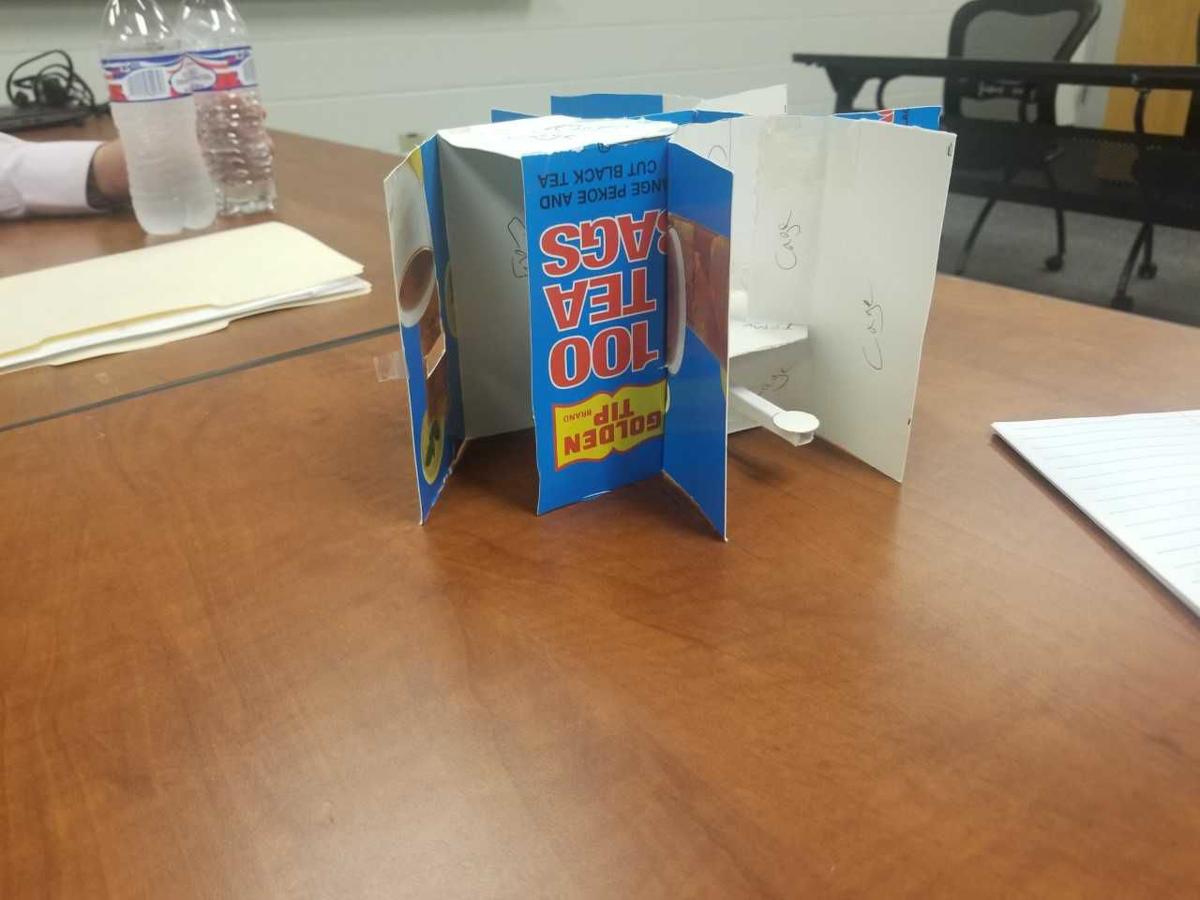 A model designed by an inmate sits on a table at the Idaho Maximum Security Institution July 16. 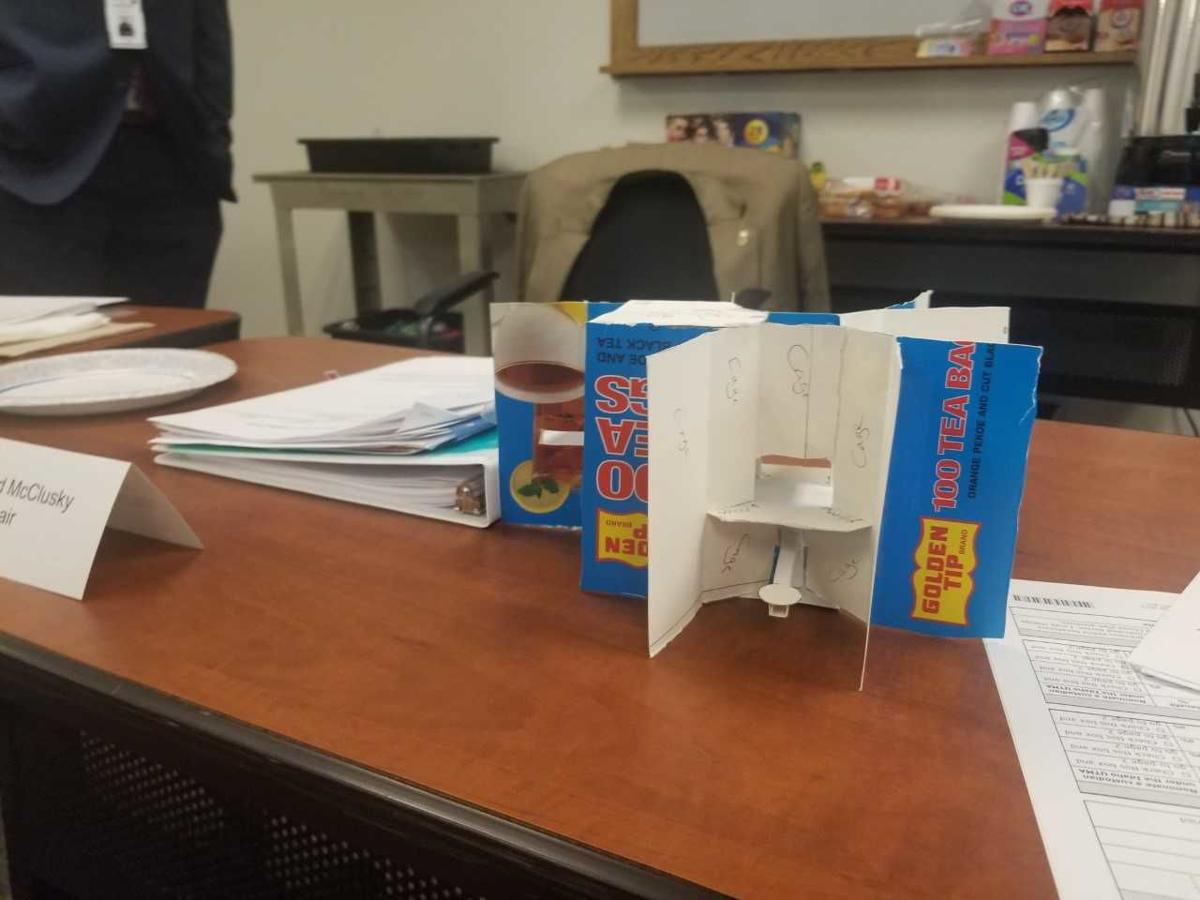 A model designed by an inmate sits on a table July 16 at the Idaho Maximum Security Institution.

An American flag floats in a gentle breeze above the razor wire at the Idaho State Correctional Center, Thursday, July 18.

In this file photo from 2016, then Idaho Maximum Security Institution Warden Al Ramirez stands in one of the long-term segregation cells at the Kuna prison.

The model, constructed by an inmate, sits on a table at the Idaho Maximum Security Institution, July 16, 2019.

The model, designed by an inmate, sits on a table at the Idaho Maximum Security Institution, July 16, 2019.

A model designed by an inmate sits on a table at the Idaho Maximum Security Institution July 16.

A model designed by an inmate sits on a table July 16 at the Idaho Maximum Security Institution.

It had been constructed by an inmate at the facility, who is held in “restrictive housing” — the Idaho Department of Correction’s term for solitary confinement. It depicted a four-sided table, with each chair enclosed in its own compartment, complete with a door, locked from the outside. The center of the table, however, was open, meaning those sitting at the chairs could talk to each other.

The model, Yordy said, might help his staff improve conditions for inmates at the prison.

Recently, as Yordy said at the July 16 Idaho Board of Correction meeting, department officials have considered ways to increase human interaction for the 214 Idaho inmates held in prolonged restrictive housing — meaning they’re in a cell by themselves for all but a few hours a day. IDOC officials aim to let inmates out for at least three hours a day said Idaho Department of Correction Josh Tewalt. While inmates at facilities other than the Idaho Maximum Security Institution might be held in isolation for brief periods of time, only those at the institution are held in prolonged solitary confinement.

Department officials have been considering changes for months, but Yordy offered the board an update July 16. It’s an effort by the department to keep ahead of the United Nations’ Mandela Rules on solitary confinement, as updated in 2015. Those rules define solitary confinement as keeping a person confined, alone, for 22 hours a day or more “without meaningful human contact.” He and other department officials wanted to find a way to create opportunities for Idahoans in restrictive housing to have “meaningful human contact.”

“We’re just trying to get ahead of the curve,” Yordy said, noting department officials are aware of the criticism the practice has received from organizations such as the American Civil Liberties Union.

The problem, as Yordy told board members, is the inmates in restrictive housing are often placed there because they’ve been violent. The inmate who made the model, for instance, had attacked people multiple times. Yordy said he was one of the most problematic inmates in the facility. Prison staff members want inmates like him to have human interaction, but they don’t want to put others at risk, Yordy said.

The inmate who made the model knew staff members needed a way to let prisoners interact without the threat of harm. He designed the enclosed table — crafting it from a cardboard box of tea, most likely using some sort of contraband disposable razor, Yordy speculated, and Scotch tape — with that thought in mind.

He slipped the model to a staff member, along with a letter explaining its purpose.

“Just out of the blue this thing shows up with the letter,” Yordy said.

In the letter, the inmate dubbed the table a “secure socialization module.”

At the time, the model’s designer wanted a way to play cards with other inmates. In his letter, he listed other ways the tables could be used, such as venues for classes and religious meetings.

He did acknowledge hands and forearms could meet in the center of the table, and said prison staff could decrease the risk of violence by only placing inmates together if they requested it, and by “never attempting to force socialize any offenders who are known to present a threat to each other,” according to the letter.

“There would be no point in IDOC investing time and resources into constructing these modules if IDOC only intends to push a policy of forced integration/socialization between offenders who will never get along,” the letter reads. “This would only end up causing some inevitable incident and/or the offenders just wouldn’t go out to the modules at all.”

Prison officials were impressed by the design.

Yordy brought the original model to the board meeting to show board members, who passed it to one another. Yordy said, staff members are building such a table, and they hope to give it a trial soon.

The department has a fewer inmates in restrictive housing than it did roughly three years ago. Back then, according to Yordy, there were as many as 318 in solitary confinement. Department officials committed to reducing that number, and it dropped to 165, but has since increased to above 200.

Inmates can remain in restrictive housing for years — the longest anyone has remained in solitary confinement was 22 years, but that was by choice, according to Yordy. It wasn’t until 2018 the inmate decided to return to the prison’s general population.

Other than that, seven years is the longest stint an Idaho inmate has completed in restrictive housing. That inmate posed a threat to others in the facility — Yordy said the man had raped another inmate prior to staff members isolating him.

The enclosed tables are not the only practice department officials are considering. They’re also working to modify some of the facility’s steel desks — called “programming desks” — so an inmate can be handcuffed to it with their arms behind their backs. Multiple inmates at a time might be able to sit at the desks and take part in classes or therapy without the possibility of harming one another, Yordy explained to board members. Other state prison officials are using similar chairs in their facilities, he said. Within 60 or 90 days, he hopes to have about 34 chairs ready.

The shift in thinking about restrictive housing comes from a humanitarian standpoint, and Yordy knows there is pragmatic value to it as well.

“What’s going to happen when somebody (finishes their sentence) out of (restrictive housing)?” Yordy posited to the board. “You’re going to turn them loose and put them back in the community. Just from a public safety (standpoint) … we have to find ways to get them that human contact.”