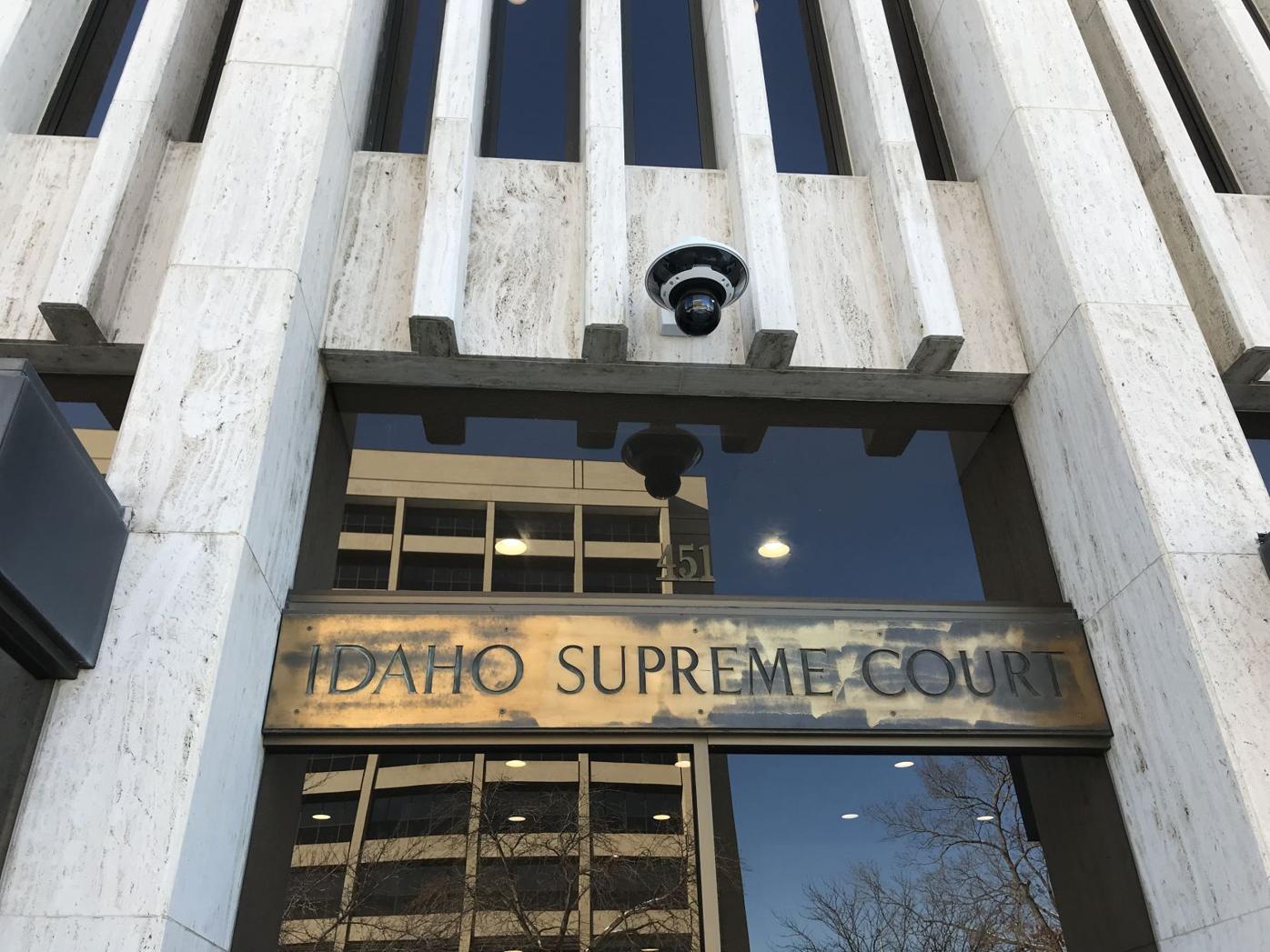 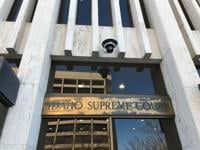 This screenshot shows the Idaho Supreme Court’s five justices hearing oral arguments on Friday, Jan. 14, 2022, in four challenges to the state’s new legislative redistricting map. The arguments were moved online due to the spread of COVID-19; the chief justice tested positive shortly before the arguments began.

Attorneys for the chairs of the Coeur d’Alene and Shoshone-Bannock Tribes, the state, Ada and Canyon counties and former state Sen. Branden Durst gave the justices their take on the complex and interwoven legal considerations in drawing district lines in Idaho, from the U.S. Constitution’s equal protection clause, to the Idaho Constitution’s strictures against dividing counties, to communities of interest and what constitutes evidence of discrimination.

“The Native American tribes, the Sho-Bans and the Coeur d’Alenes, are extraordinary communities of interest, much more so, I would submit, than cities or towns,” attorney Deborah Ferguson told the court. “They have their separate tribal sovereign nations with a distinct culture, and they’re woven together by history, spiritual ties, ancestral bonds, and for thousands of years a sense of place on the earth.”

She argued that the state’s bipartisan citizen redistricting commission “did nothing to preserve them as communities of interest as the Idaho law requires. Instead, I would submit it did the opposite, by scattering them across multiple districts and diluting their voter strength.”

A decade ago, the previous Idaho redistricting commission drew a legislative map aimed at keeping Idaho’s tribal reservations together in districts, but the court overturned it, saying it divided too many Idaho counties. While Idaho state law requires preserving communities of interest, the state Constitution sets the county-preservation standard above that, the court held.

This time around, the new redistricting plan — which divides eight Idaho counties, including Ada and Canyon — is being challenged by the tribes for how their reservations were treated; by Ada and Canyon counties for the way parts of each were broken off into districts that also include parts of neighboring counties; by Durst, who wants the court to change its definition of county splits from previous rulings and adopt a plan he submitted; and by Pocatello resident Spencer Stucki, who objects to eastern Idaho district lines and favors dividing more counties.

The arguments, which had originally been scheduled to occur in person, were held online amid the spread of COVID-19, and as they opened, Chief Justice Richard Bevan revealed that he had just tested positive for the virus.

“Rest assured that I’m prepared and anxious to have this hearing today,” he said over Zoom. “I feel my symptoms are quite mild, and I’m ready to go.” Justice John Stegner also was isolating at home after a family member tested positive for COVID-19.

Ferguson argued that the state could comply with the equal protection clause and the constitutional strictures against excess county divisions and still preserve tribes’ communities of interest in drawing legislative maps. “I think what really happened here is that the commission was waylaid by an imaginary polestar,” she told the court. “In obedience and over-compliance with the federal Constitution, it left its discretion on the table.”

The new map, L-3, has a maximum population variation between districts of just 5.84%. “The Supreme Court has been very clear that up to 10% or less is considered an acceptable deviation if there’s no discrimination involved in arriving at that,” she said. “And when the commission over-complied with the equal protection clause by seeking zero percent or no more than 5% deviation, all of its discretion, the play in the joints to deal with the Idaho issues, was left behind.”

“By making their quest for a maximum deviation so low, they … basically put themselves into a straitjacket,” she said. “We’ve got so much give under the federal Constitution and equal protection, and we can go up to 10% if there’s no discriminatory purpose underfoot, and we need to keep the county splits to a minimum. I think we have to stay between those rails, because if we don’t, the mandatory statutory criteria we’ll never get to. They’ll never be considered. And that leave the tribes and other communities of interest out in the cold.”

Bevan picked up on that “rails” analogy in later questioning of Deputy Attorney General Megan Larrondo, who urged the justices to uphold the commission’s map as constitutional.

“The six-member bipartisan Idaho Commission for Reapportionment is a constitutional body that has been entrusted by the people of the state of Idaho with the Herculean task of redistricting a state that has complex geography, political boundaries, population distribution and legal requirements,” Larrondo told the court. “The commission worked carefully and diligently, traveled the state, heard hours of frequently contradictory public input, held 18 public hearings, received written submissions, considered over 80 publicly submitted plans, and correctly applied the legal hierarchy governing redistricting to adopt a plan that complies with governing law. This court should reject all the challenges consolidated under this proceeding.”

Larrondo argued that the commission plan is constitutional and legal “because it creates districts that are of as equal population as practicable, while still effectuating legitimate state interests in a non-arbitrary and non-discriminatory way.” She said it complies with state law, including provisions regarding communities of interest, “to the extent possible in light of the superior constitutional requirements.”

Alexis Klempel, deputy prosecuting attorney for Canyon County, argued that county voters have an interest in joining with fellow county residents when they elect state legislators. “There are several characteristics of county life that bind county residents together,” she told the court. “They elect county officials together, they have county fairs together, and county infrastructure and tax considerations affect these residents together. Thus, the voters of a more urban county will have different interests than the voters of surrounding rural counties, even though some of the urban county residents live in rural portions of that county.”

Ada County Deputy Prosecuting Attorney Lorna Jorgensen said, “The result of this case will affect legislative representation for almost 40% of the state’s population for the next 10 years and into the future. L-3 is unconstitutional because it divides too many counties.”

She displayed a chart and said Ada County saw parts of its population that could have made up an internal district broken off into districts that also include other counties. “There are sufficient people in Ada County for their own legislative representation,” she told the court.

Justice Greg Moeller asked her, “So is the commission required to just look at Ada County, and not at all calculate how that will affect the rest of the state? Because it appears that they considered that option, but they determined that the ripple effect that would cause throughout the rest of the state made it in the end inconsistent with the equal protection clause.”

Jorgensen responded, “Your honor, my point is that if you’re going to treat Bannock County, Bonneville County, Kootenai County, Twin Falls County, Madison County in a certain way, you need to apply the same principle and standards to Ada County and Canyon County, since we have almost 40% of the population of the state. We’re entitled … to have representation in the Legislature that represents the county’s interests.”

Justice Colleen Zahn noted that an alternative map submitted to the commission that kept Ada County whole instead divided Bonner County multiple times. Jorgensen said Ada County isn’t backing any particular alternate map; it just wants a rewrite. “The maps are merely illustrating that there can be fewer divisions,” she said.

Larrondo told the court, “We’re just talking about one more county. The commission only split eight counties. And there is no evidence that it could’ve split fewer counties and still complied with the equal protection clause.”

The commission found that three seven-county-split plans submitted to it all violated equal protection, in part by underpopulating North Idaho districts while overpopulating southern Idaho districts. It also pointed to issues with oddly shaped districts in those plans, which it found appeared to be drawn simply to barely squeak in at or just under the 10% population deviation limit.

Zahn questioned whether regional differences would violate equal protection if there was no evidence they were created with discriminatory intent.

Larrondo said, “I think it’s vital to look at the impact on the entire state.” The seven-county-split plans gave northern Idaho an additional legislative district, she said, “and that’s significant, when you think about how fast-growing southern Idaho is.”

“There’s trade-offs,” Smith responded. “The map that they have, L-3, has three extra divisions from Ada County, so Ada County’s losing representation.” Durst’s own plan, L-84, “has the fewest,” he argued, though the commission determined that L-84, like L-3, divided eight counties.

“The commission put too much emphasis on equal protection, and they did that at the expense of the Constitution,” Smith told the court.

Larrondo told the court, “The commission was not harming Ada or Canyon county with its decision to … create one more external division. This increases the influence of Ada and Canyon county voters to have more legislative districts. It would actually dilute the voting power of Ada County voters to be in overpopulated districts,” as in L-84.

Bevan praised all the attorneys who offered arguments, including Larrondo, who had to argue for a full hour straight while the challengers divided up their hour. “You’ve all done masterfully,” he said. “Well done. The matter is under consideration. We’ll render a decision.”

The court’s decisions typically come out in writing within the weeks or months following oral arguments; there’s a time crunch in this case, as candidate filing for the 2022 elections is set to start Feb. 28. If the court upholds the plan, it stands. If not, it’d order the same commission to go back to work on a new one, potentially delaying Idaho’s May 17 primary election.