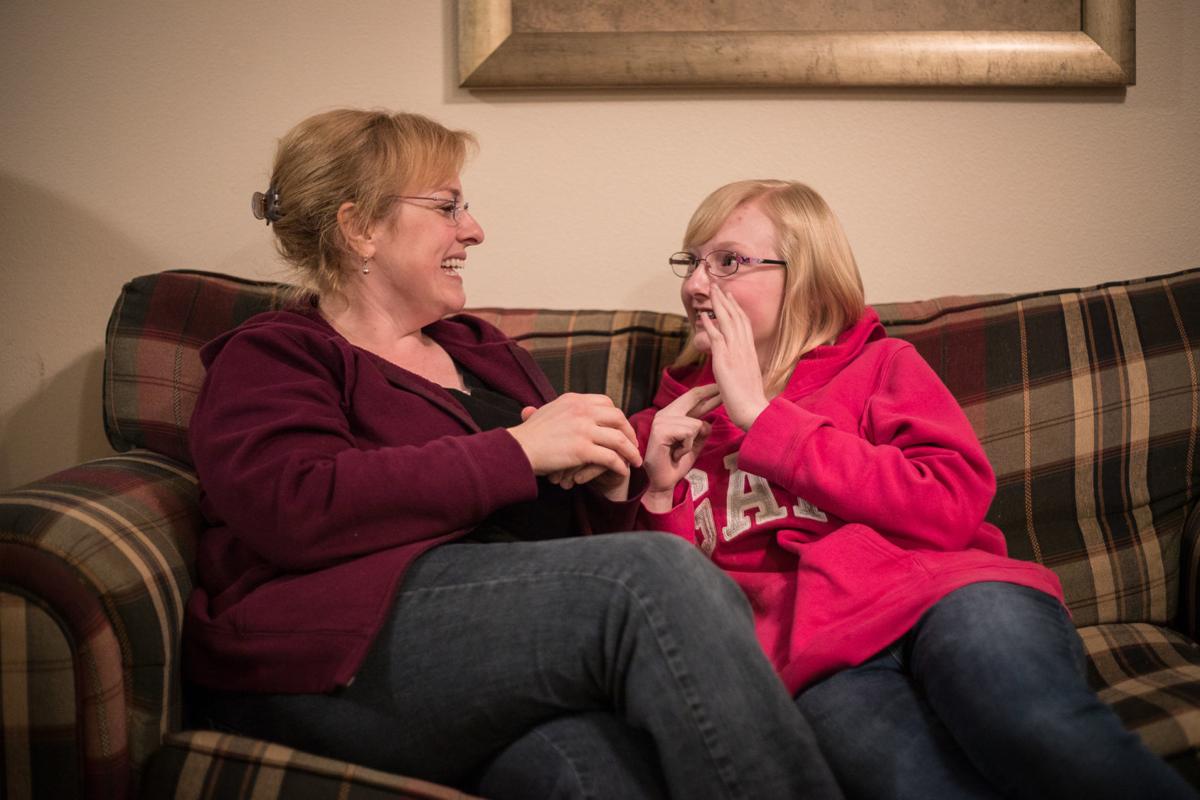 Katie Baker, 14, and her mom, Deseret Baker, sign to each other on their couch in their house in Boise on Jan. 22. 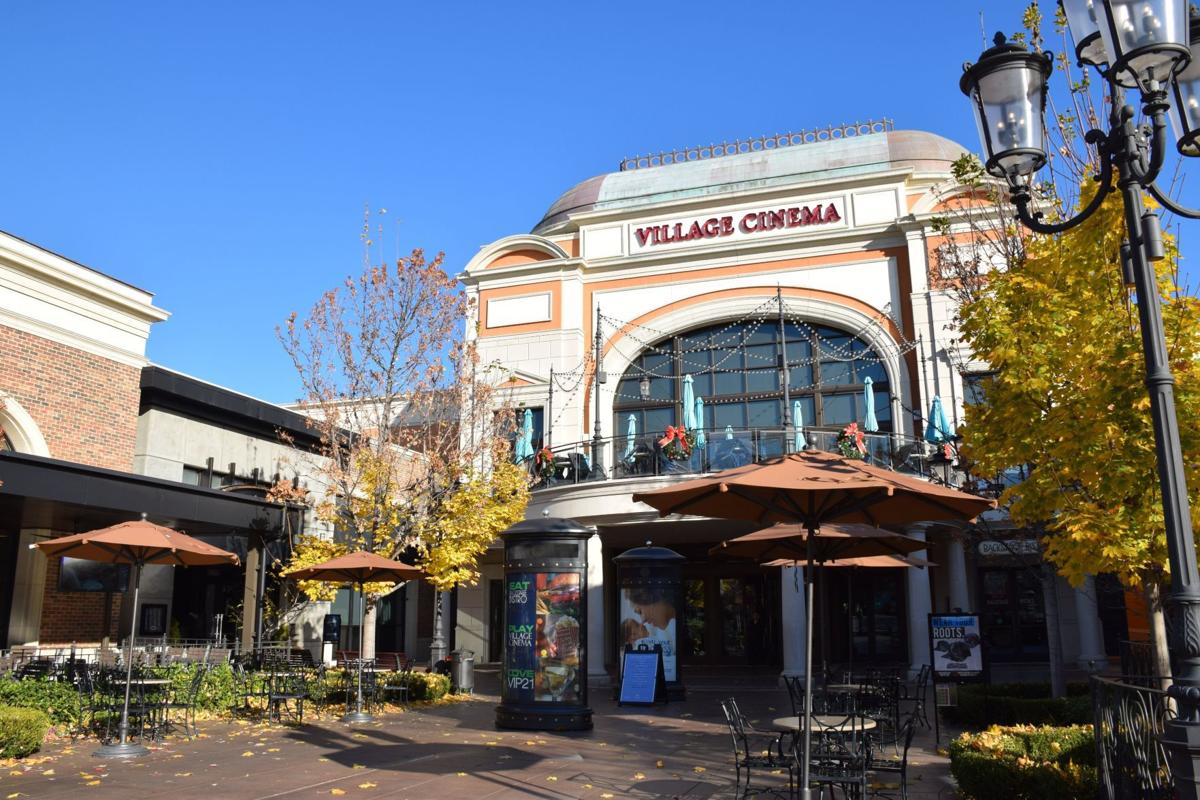 The Village Cinema is at 3711 E. Longwing Lane, Meridian.

For her daughter Katie’s 8th birthday, Deseret Baker took her to see “Frozen.” Being partially deaf and using a hearing aid, Katie requires closed-caption glasses at the movies, but the back and forth with theater staff to get the glasses to work caused them to miss the first 20 minutes and, in frustration, to leave.

After contracting meningitis when she was 7 months old, Katie slowly lost her hearing, fully losing it in her left ear and needing a hearing aid in her right. Struggling with bulky and ineffective captioning devices at theaters is not unique to the now 14-year-old — more than 200,000 Idahoans have a hearing impairment.

Closed-caption glasses and screens are devices individuals can request from the front desk of a theater. Captions play over the scene in bright green letters. An alternative, open captions, display words at the bottom of the movie screen in everyone’s view.

Many in the deaf and hard of hearing community — including adults who have lost their hearing with age — are calling for equal access to theaters in the form of regular screenings of open-caption movies. But the request has met resistance from movie distribution companies.

“We do watch movies at home,” Deseret Baker said. “Everyone has access to movies at home, and yet theaters are still in business. Because the experience is different.”

When Katie goes to the movies, she can feel the vibrations of sound effects and experience the film on a big screen, but at the mercy of a closed-caption device, she has to sit, uncomfortably — the glasses barely fitting over her regular eye glasses and hearing aid.

Today, all theaters are required by the Americans with Disabilities Act of 1990 to keep a handful of closed-caption devices based on their occupancy — these devices can be either caption glasses or handheld screens. The paperwork for closed-caption glasses — which cost hundreds of dollars — is cumbersome, along with the devices being bulky and not always working. If a large group of hearing-impaired individuals want to see a movie together, there may not be enough glasses for all of them.

“People prefer open caption over the devices; it’s more organic,” Steven Snow, executive director for the Idaho Council for the Deaf and Hard of Hearing, said. “The full moviegoer experience.”

Closed captioning devices aren’t equal access, he said. Only one theater in Emmett, one theater in Twin Falls and the Majestic in Meridian show open-caption movies regularly.

The blockbuster hit “A Quiet Place” was the first open-caption movie to be shown at the Majestic in Meridian just under a year ago, prompted by the Boise State University American sign language program. Of the 145 seats in the auditorium, all but one were filled.

The owners were shocked, Snow said. They saw a huge untapped market.

John Waldo, an attorney focused on improving accessibility for people who are deaf and hard of hearing, said distributors are reluctant to offer open-caption films because they are convinced it will drive away hearing audiences.

Theaters that run under large movie distributors, such as the Village Cinema in Meridian under Cinema West in California, must go through their parent company to get copies of movies with open captions, Waldo said.

The legal representative of three hearing impaired issue-oriented nonprofits, including the Association of Late-Deafened Adults, Waldo is hearing-impaired, himself, and has gone up against distributors such as Regal Cinemas many times in court — he has never been able to fully persuade them that open captions are not distracting to hearing audiences.

“What I’ve been trying to push for years is let’s give everybody a fair shot at going to the movies in the best way that works for them,” Waldo said. “But the distributors are concerned hearing audiences will shun open caption theaters.”

The deaf and hard of hearing community, as well as Waldo, aren’t asking for every movie to be open caption or even a daily showing — with 31 showings in a week of a typical movie, two open-caption showings a week is reasonable, they say.

“There’s a lot of people being hurt by the distributor’s decision to exclude them,” Deseret Baker said. “There is not another minority group where this would be acceptable.”

Before the digital era, captioning was expensive to implement, and closed-caption systems were the best way for theaters to reach hearing impaired audiences. Now after digital conversion, open-caption movies are easily provided by studios.

“Technicians might not know how to do it,” Snow said, “but, it’s just as simple as pushing a button. A lot of pushback is based off ignorance.”

Mark Griffith, general manager at the Village Cinema, said the company’s location in Twin Falls plays open-caption movies once a month and although he could not comment specifically, it is something they are looking into in Meridian.

“We have had several employees in the past with deaf parents or friends and many members of the community that are pushing for it, so we are looking to do something like that soon, as well,” Griffith said. “We don’t have details on what that will look like yet.”

Cinema West did not respond to a request for comment on how local theaters can acquire open captioned films. Regal Cinemas could not be reached for comment.

When Katie had her first experience with open caption movies, Deseret Baker said, it opened a whole new world of entertainment.

She could enjoy the movie — “Incredibles 2” — in a theater setting without bulky eyewear and drawing attention to her impairment. Reading lips of actors is a difficult skill learned only by practice but never perfected. Animated characters’ lips are impossible to read, Katie said; she couldn’t even try.

As caption devices stand, when Katie goes on her first date to the movie theater — when she’s old enough, her mom said — her face will be hidden from her date behind thick, black headset, whispering commentary to her companion wouldn’t be something she could do.

“You always want to be confident in yourself,” Katie said, “especially in that situation where they might not know how to interact with a deaf person to begin with.”

“Many (hearing-impaired individuals) often refuse to admit that they do have hearing loss,” Snow said, “and as a result, many of them won’t request for accommodations. Having open captions would be much more easier and less embarrassing for many of them.”

Open caption films are also a resource for people who speak English as a second language.

“I believe if people understood why there were captions, there wouldn’t be a big pushback,” Deseret Baker said.

ADA compliance applies nationwide, but a provision allows for state and local laws to take precedence over federal laws if they provide better protection for members of the hearing-impaired community. In 2016, Hawaii became the first in the nation to require theaters to play open captions for at least two showings a week of each movie.

For Snow and the Idaho Council for the Deaf and Hard of Hearing, drafting legislation is an option, but second to working directly with local theaters to supply more accessible movies to hearing-impaired Idahoans.

“The entertainment experience should be equal access for everyone,” Snow said.

Riley Bunch is the night reporter for the Idaho Press. Reach her at 208-465-8169 or follow @rbunchIPT on Twitter.