Originally published at KTVB.com on Jan. 12.

BOISE — A Treasure Valley man who boasted online about storming the U.S. Capitol alongside a mob of Trump supporters can be released from jail ahead of his trial as long as he follows restrictions, including location monitoring, not possessing any guns or other weapons, and staying at least 1,000 feet away from both the Idaho Statehouse and the James A. McClure Federal Building, a judge ruled Wednesday.

Josiah Benjamin Colt, 34, is charged federally with knowingly entering or remaining in any restricted building or grounds without lawful authority and violent entry and disorderly conduct on Capitol grounds.

Colt turned himself in to the FBI's Joint Terrorism Task Force at the Ada County Jail on Tuesday.

FBI Special Agent Matthew J. Gano wrote in an affidavit that photos of Colt taken inside the Capitol Building and his own statements on social media prove he participated in the attempted insurrection, which was aimed at stopping lawmakers from certifying Joe Biden as the next president of the United States.

"Based on information I have reviewed, I estimate that between 2:00 p.m., and no later than 4:00 p.m., the defendant, Josiah Colt, entered the United States Capitol without authorization to do so. He was photographed hanging off a balcony and landing on the floor of the Senate chambers (Exhibit A)," Cano wrote. "In a video posted to Facebook and circulated widely on other social media platforms, the defendant claims he was the first person to sit in the House Speaker’s chair and calls House Speaker Nancy Pelosi a traitor. The defendant appears to be mistaken as he was also photographed in the seat reserved for the vice president, and not Speaker Pelosi (Exhibit B)."

"I didn't hurt anybody in there, yeah I did sit in Nancy Pelosi's seat. She shouldn't be there, she doesn't represent the American people," Colt said.

The FBI agent noted that Colt also admitted to participating in the riot in a statement given to CBS News, in which he says he got "caught up in the moment" and was sorry for what he had done.

Both federal charges are misdemeanors: knowingly entering or remaining in any restricted building or grounds carries up to a year imprisonment, while violent entry and disorderly conduct on Capitol grounds is punishable by six months.

Michael Sherwin, acting U.S. attorney for D.C., said Tuesday that “all options are on the table” for charging those who stormed the Capitol, adding that investigators are still combing through a massive amount of evidence with the goal of filing additional charges which could range from trespassing to murder.

Unlike other agencies, the federal system is not required to release mugshots for those in its custody.

Colt is represented by Boise lawyer Chuck Peterson, who has defended clients including Randy Weaver from the Ruby Ridge standoff and terrorism suspect Fazliddin Kurbanov, an Uzbek national who plotted attacks at U.S. military bases and Boise's Ann Morrison Park. 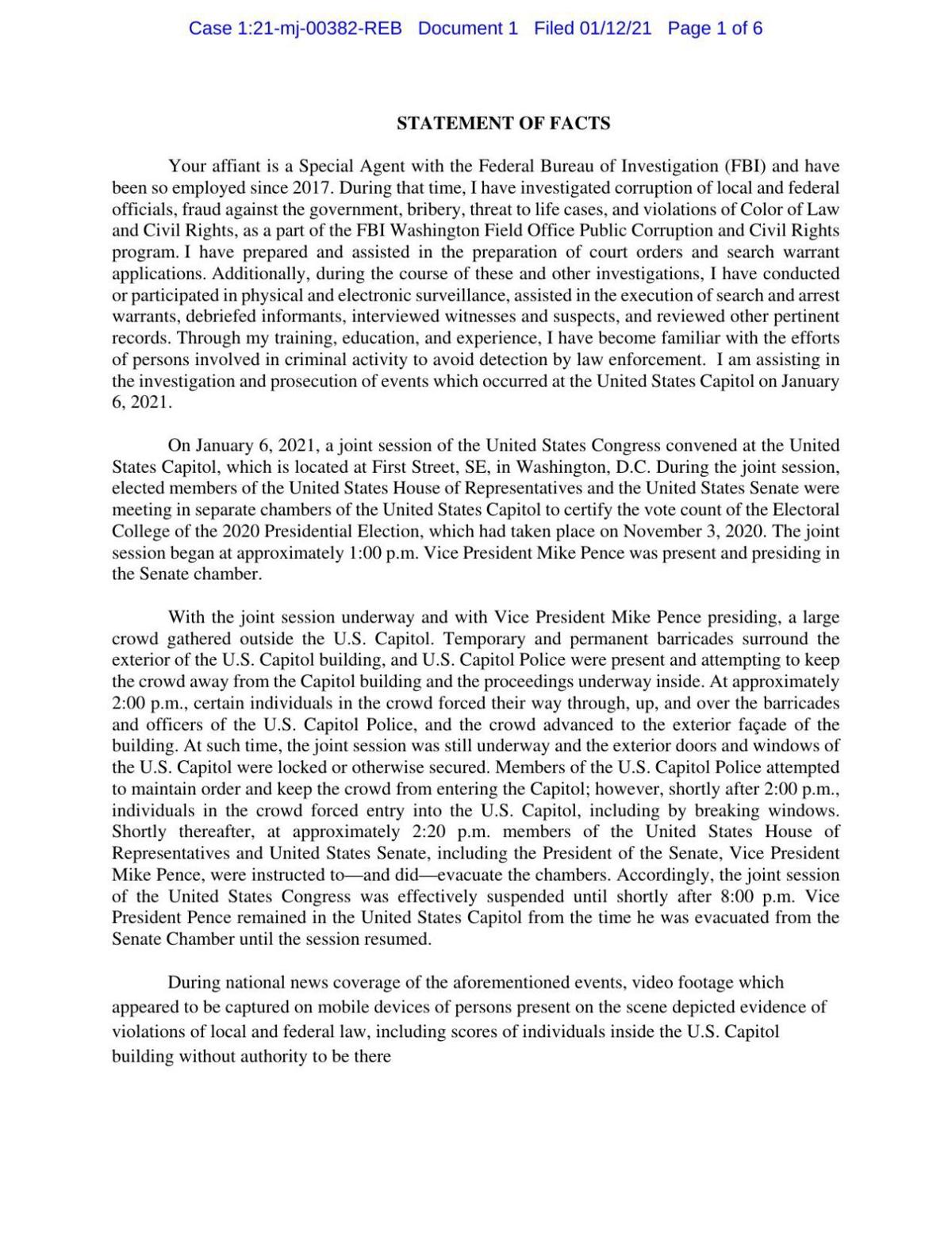 At his 11:15 a.m. hearing on Wednesday, Colt agreed to waive his preliminary hearing in the case, a proceeding aimed at establishing whether or not there is enough probable cause for a case to go forward.

Prosecutor Heather Patricco told the judge that "the government is not seeking detention" for Colt ahead of his trial as long as he agrees to follow a long list of pretrial conditions.

The conditions include that Colt must appear in court for his hearings and surrender if convicted of the charges, undergo pretrial supervision and location monitoring, abide by a curfew, not possess a firearm, "destructive device, or another weapon, not consume alcohol or go to bars, and have no contact with any victims or witnesses in the case. He is also required to surrender his passport, not travel outside of Idaho or Washington D.C without permission, stay 1,000 feet away from the federal building in Boise and Idaho Capitol Building, and comply with self-isolation and social distancing rules in connection to the COVID-19 pandemic.

Colt agreed to the restrictions, and is expected to be released from the Ada County Jail sometime Wednesday afternoon. He is due back in court Jan. 19.

More from our partners at KTVB.com:

Stretch of I-84 closed in eastern Oregon after semis crash