This 2011 file photo shows the execution chamber at the Idaho Maximum Security Institution as Warden Randy Blades, right, stands in the observation room, in Boise. 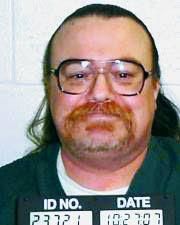 BOISE — It is possible Idaho’s government could seek a death warrant as early as October for the execution of one of its nine death row inmates, as the inmate’s attorneys say the state is trying to give them little notice of when the date will be.

The inmate is Gerald Pizzuto Jr., 64, who in 1986 was sentenced to die. He was convicted of murder for the deaths in 1985 of Berta Herndon, 58, and her nephew Del Herndon, 37, at a cabin in Idaho County, according to the Associated Press. Prosecutors say he wanted to steal money from the pair, and that he tied their hands and legs before he beat them both with a hammer and shot Del Herndon with a .22 caliber rifle when the hammer blows failed to kill him, the Lewiston Tribune reported.

Pizzuto’s attorneys appealed the case, and raised the question of whether he has an intellectual disability, which would bar him from execution. The 9th Circuit Court of Appeals was unconvinced, however, according to the Associated Press.

The U.S. Supreme Court may hear Pizzuto’s case during its October session, but if it doesn’t, it is possible the state could seek a warrant to execute him.

Attorneys “indicated in a pleading that the State could request a death warrant as early as October 2020,” according to a court document Pizzuto’s attorneys filed on Monday.

That document was filed as part of a legal action that began in March, on behalf of Pizzuto and another death row inmate, Thomas Creech, who may be the next to face execution. The attorneys are from Federal Defender Services of Idaho, a nonprofit organization funded by yearly grants from Congress.

Pizzuto’s lawyers are worried because they say the state is trying to provide little notice of when the execution will take place. They’re concerned because Pizzuto is in poor health — he’s in hospice and he has bladder cancer, according to court documents. The Idaho Department of Correction has refused to say where the drugs used to kill Pizzuto would come from, and his attorneys are worried the drugs used could have an adverse reaction with his medication or his health issues, resulting in an elongated, torturous death. In addition to that, the department has, in the past, not said which drugs it will use during an execution until relatively soon before the killing.

The Idaho Department of Correction has told the Idaho Press on numerous occasions the department does not comment on pending litigation.

Attorneys are sparring over the meaning of an April 8 order from the case’s judge requiring the department “to inform the court 14 days in advance if the state sets an execution for Pizzuto that, if carried out, would moot his claims before he can fully and fairly litigate them in this case.”

Pizzuto’s attorneys say they can’t determine if the execution will be inhumane without more notice and information.

“Without the execution plan, that substantial undertaking is obviously impossible,” according to Monday’s court document. “And with the plan, it will take a significant amount of time, which is exactly what the (state is) intentionally depriving the plaintiffs of by withholding any information about how the execution will be carried out.”

After days of trial in 2019 unrelated to Pizzuto’s case, a 4th District Court judge ordered the department to turn over the source of some of the drugs, but the state filed an appeal to the Idaho Supreme Court.

Not long before that trial, the department had also declined requests from Pizzuto’s attorneys about the possible execution.

“It was all the way back on Dec. 18, 2018, that the plaintiffs asked the defendants for basic information about the State’s intentions for their executions, including what drugs would be used to kill them,” according to Monday’s court document. “For twenty months and counting, the defendants have refused to provide that information to the plaintiffs, even while threatening to execute Mr. Pizzuto less than three months from today. Instead, the defendants are waiting to divulge the information until shortly before the execution, so as to prevent Mr. Pizzuto from having the chance to fully investigate and prepare potential claims before they are extinguished by his death.”

As a solution, Pizzuto’s attorneys are seeking a stay of execution to avoid a “blizzard of onerous litigation” should the state ask for a death warrant in the coming months. They write it “offers the Court a far more straightforward way of managing the case and giving itself time to carefully resolve Mr. Pizzuto’s serious claims.”

“An administrative stay of perhaps six months, or whatever other amount of time the Court thought appropriate would be ‘only intended to preserve the status quo’ to provide space to consider the issues in the case,” according to Monday’s court document.

A judge hasn’t made a decision about a stay yet. The next deadline in the case is Wednesday, when attorneys must file more information about their interpretation of the April 8 order.

If Pizzuto is executed, he would be only the third Idahoan executed in decades. The state’s most recent execution was that of Richard Leavitt in 2012, which came on the heels of Paul Ezra Rhoades’ execution in 2011. Prior to that, the state had had a long gap in executions.

As Pizzuto’s attorneys pointed out, a judge in Rhoades’ case noted the department’s lack of notice of execution.

“Nine years ago, this Court indicated that it was ‘troubled’ by IDOC’s penchant for announcing critical information about executions at the last minute,” they wrote. “Nine years later, IDOC continues to deliberately withhold the most basic parts of its plans for executions— including the drug to be used—until the eleventh hour.”