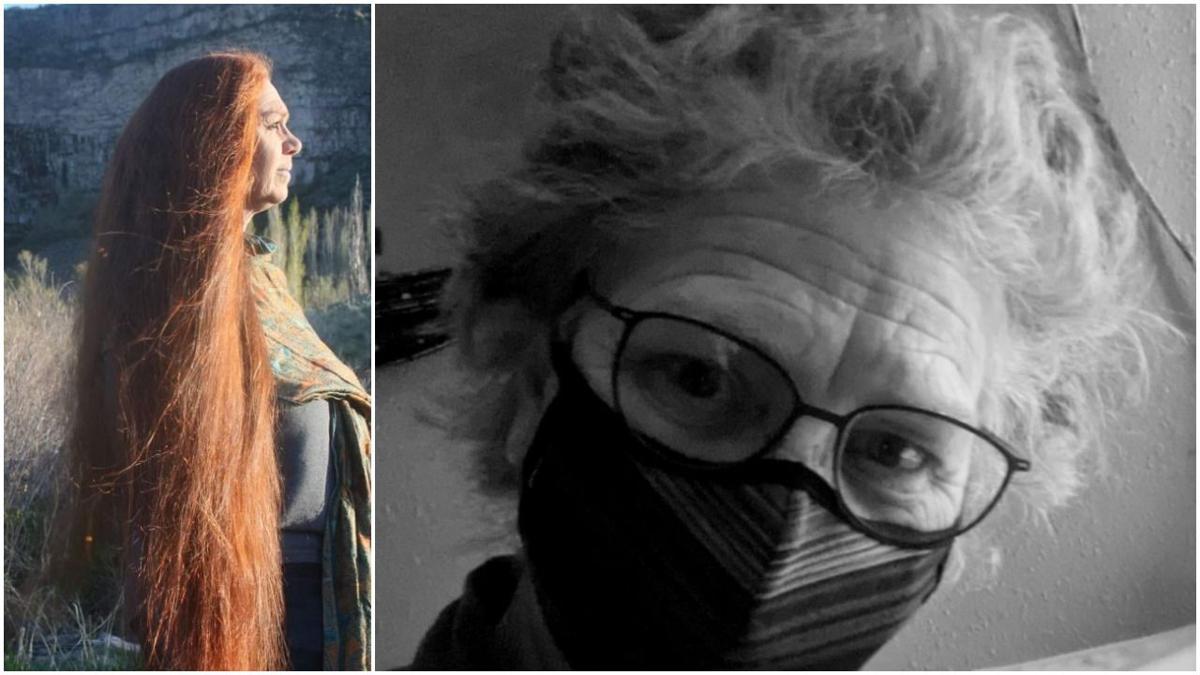 Juli Lynch says her post-viral symptoms included hair loss. A cancer survivor, she grew her hair down to her calves. Months after developing symptoms of COVID-19 and with lingering health problems, she cut it short. 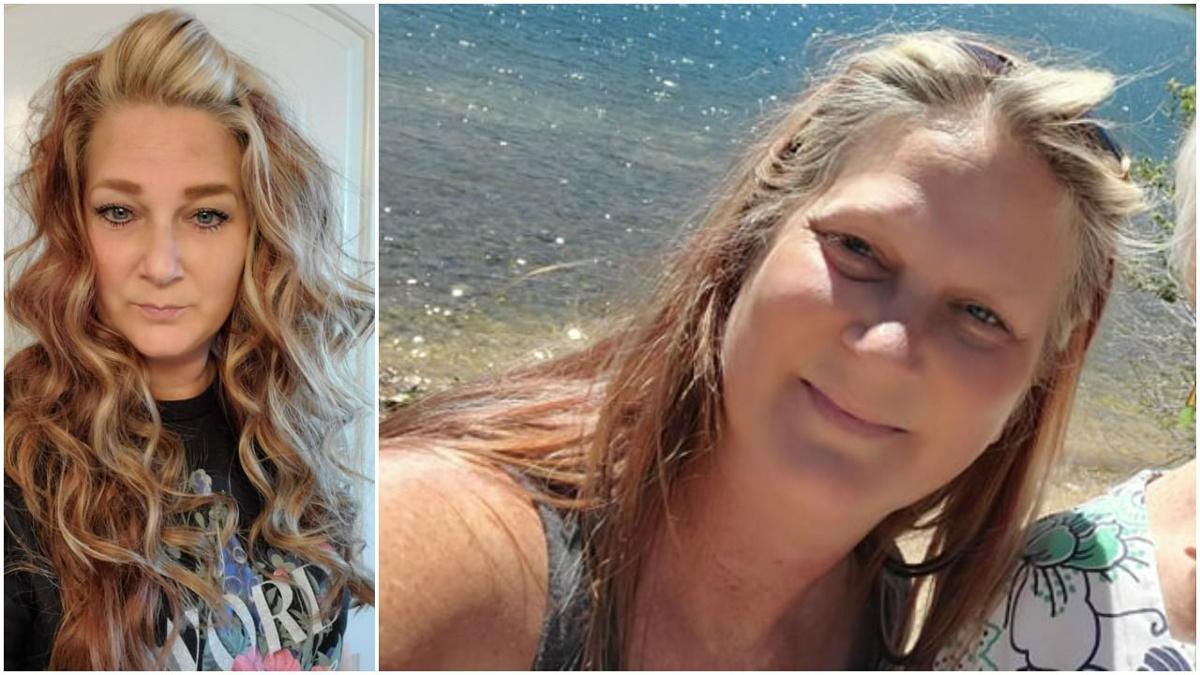 Corrie Crow provided these photos to show her appearance before COVID-19 and three months after. Crow says she lost a significant amount of hair each day, and symptoms including extreme fatigue and depression set in. 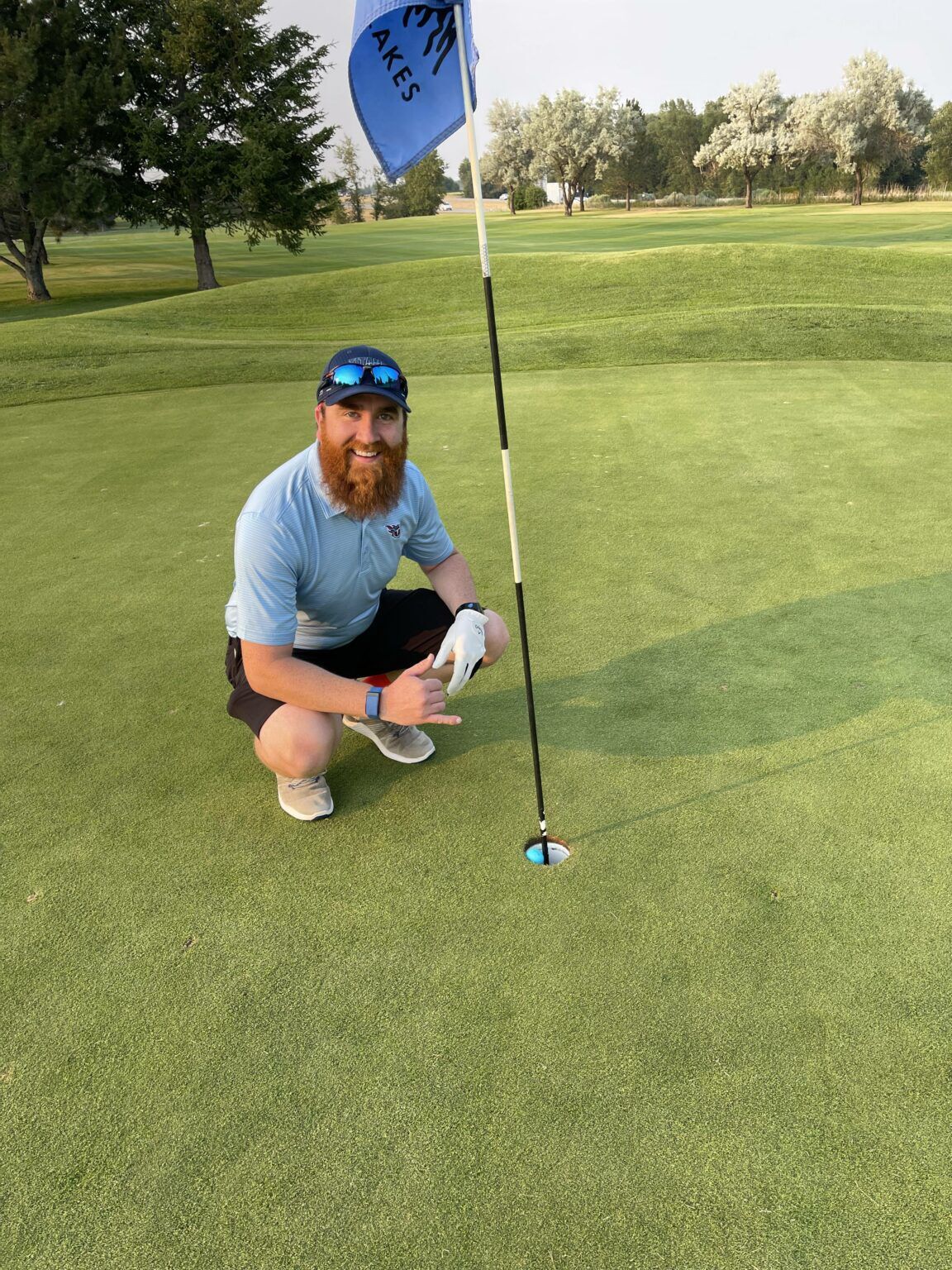 Travis Smith golfs at Teton Lakes in Rexburg on July 12. Smith says his “new normal” includes carrying an inhaler with him on the golf course. 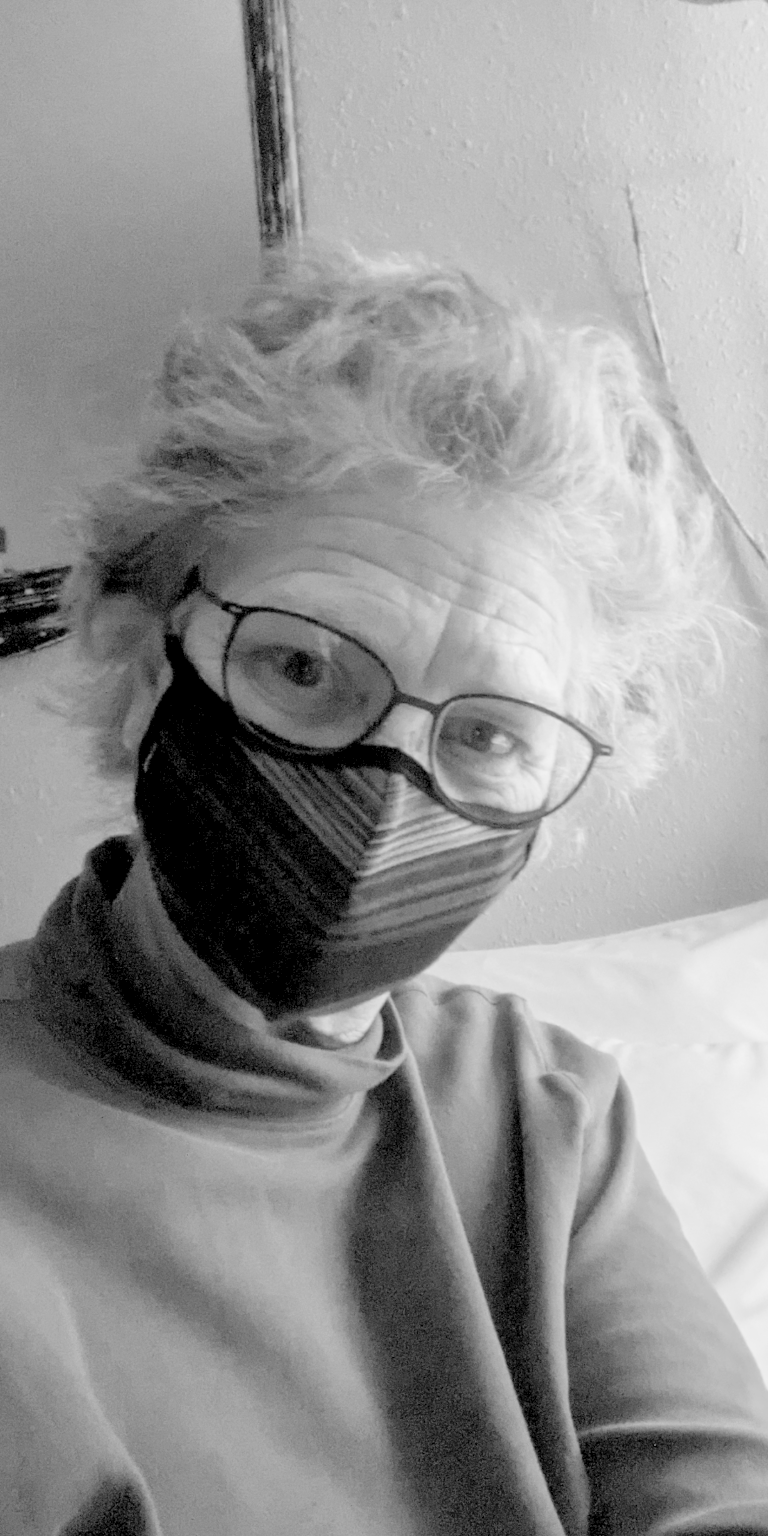 Juli Lynch says her body isn’t the same, a year and a half after she and her family members developed symptoms of COVID-19.

“One year ago today, my life changed,” he wrote July 25. “This was the last picture I took before (realizing) I contracted COVID. I didn’t know I had worked my last shift for 2 months. I was exposed at work and had no idea.”

Smith had just entered his 30s when he caught the coronavirus, along with a couple of his coworkers at an Idaho Falls bank. The symptoms began while he was in a movie theater with his wife.

A year later, Smith is working a different job. He has lingering signs of the toll COVID-19 took on his heart, his lungs and his body. And in his free time, he runs a Facebook group for Idahoans who have a post-COVID viral syndrome, also known as “long COVID.”

Many of them, infected early in the pandemic or during the 2020 summer surge, are now reaching the one-year mark.

They likely are just a fraction of the Idahoans who “recovered” from COVID-19 but have persistent health problems — from ongoing shortness of breath to more mysterious manifestations of a syndrome that health care providers still struggle to understand.

Surveys and studies indicate that 10% to 30% or more of adults infected with the coronavirus will experience persistent symptoms for weeks or months. Researchers are trying to quantify how common long COVID is among children; one recent study found only 2% of children were still unwell after eight weeks.

More than 180,000 adults in Idaho have had COVID-19, according to state data. If 10% of them had lingering health issues, that would be roughly the populations of Sandpoint and Hailey combined.

To offer a kind of medical home for long COVID, St. Luke’s Health System last week joined the ranks of hospitals and health systems that offer a COVID-19 recovery program.

The clinic will take patients only with a referral from a medical provider. The medical team includes a primary care physician and specialists in areas such as pulmonary medicine, neurology, behavioral health, rehabilitation and more.

Idahoans over the past year have described in interviews and in the Idaho COVID Long Haulers Facebook group how their long-COVID symptoms touched almost every organ system in their bodies.

They have described a slew of complications that have been documented in medical literature on post-COVID conditions. Hair loss, strange bruises and rashes, headaches, mental health disorders, joint and muscle aches, extreme fatigue, “brain fog” and cognitive impairment, dizziness and vertigo, distorted smell and taste, heart arrhythmias, breathing problems and even testicular pain.

Juli Lynch, a 60-year-old woman who lives in Wendell, said she feels like a different person now. While foraging for mushrooms a few days before an interview with the Idaho Capital Sun, she fell three times, she said.

“I’ve never had those kinds of issues,” she said. “I refer to it as body betrayal, in my mind, because everything that I knew to be normal for myself and my lifestyle and living has changed.”

Lynch had some pre-existing health conditions, “but it was nothing that kept me from living a normal life and working a full-time job,” she said.

She believes she was exposed last year through family members in February, before COVID-19 testing was widely available. She got sick, and by mid-April she was still sick.

“We frantically tried to get tested, and even an employer tried to help with finding testing, and we just hit a wall,” she said. “Our symptoms didn’t fit the criteria.”

One of her family members later received a diagnosis of COVID-19, she said.

A year and a half later, she still has trouble breathing and can’t seem to keep her balance.

Her symptoms come and go. She has body pain, headaches, respiratory issues, fatigue, loses her balance, and sometimes has “brain fog,” the hard-to-define mental slowness that many “long haulers” describe.

“It’s almost like throwing the dice in your Yahtzee cup, and every day tossing that dice out there to see what you’re dealing with today,” she said of her symptoms.

Lynch survived cancer years ago and said she treasured her long hair after it grew back. Her hair began to fall out after she got sick last year. She estimates it thinned to about half its thickness. So she cut it short.

“I look at myself in the mirror, and I don’t recognize myself,” she said.

The past year has changed her perspective on how people think about illness — that she can appear healthy while suffering full-body aches and fatigue that knocks her out for days. She said her doctors believe she’s not making up the symptoms, they just don’t know what is causing them.

It also has changed her perspective on human nature.

“As far as how I feel about people today, I’m saddened, really,” she said. “I’m not as trusting, and I was always a giver, so I’ve withdrawn some of myself, I think, because of my experience.”

She struggles to comprehend how “collectively, as a society or community, that people are not willing to be vaccinated, that there’s all this pushback as far as COVID being real,” Lynch said. “That’s hard when you’ve been through it and come through it and you’re still struggling.”

Months after COVID-19 had settled in Idaho, it became apparent that some patients who “recovered” from the disease were not truly getting better.

Dr. Chip Roser, former medical director of the now-closed Saint Alphonsus COVID-19 clinic, has treated many of them.

He says the lingering effects of COVID-19 — and possible treatments for those ailments — aren’t fully understood. Long COVID strikes men and women, the young and the old, those with and without pre-existing conditions.

“I would say probably the most persistent symptoms are fatigue, (lung issues), cough, shortness of breath and neurological symptoms — the persistent loss of taste and smell and then, unfortunately, cognitive defects,” he said.

He sent some patients to a clinic that typically helps people recover from strokes and concussions. They went through “a rewiring process, sort of, so they could allow their brain to heal,” Roser said. “It really helped some people.”

Other patients are left with heart problems, gastrointestinal issues or newly diagnosed cases of depression and anxiety.

In some patients, the disease seems to have damaged their body’s ability to regulate heart rate or blood pressure. They get light-headed and their heart races when they stand up, for example.

Some of these people have been out of work for a long period of time, and there is a strain on the health care system but also on society.

Meridian resident Corrie Crow is a “long hauler” whose physical and mental health took a hit.

Crow says she worked long hours, was active in church and an involved mother before testing positive for COVID-19 in June 2020.

It started with a scratchy throat, which turned into full-body aches. It took several days for the fever to appear, then it didn’t go away for two months, she said. She told the Sun that, being unable to work, she eventually lost her job.

Crow says she also now has liver damage and diabetes.

(Roser, who was not Crow’s treating physician, says organ damage from COVID-19 typically occurs during the initial illness but may go unnoticed until complications arise later.)

She struggled with major depression for the first time, she said. She contemplated death, praying each morning for God to take her life, she said.

Her doctor prescribed her medication, and she was able to pay for counseling thanks to unemployment checks. Now without pandemic unemployment benefits, she is reluctantly applying for disability, she said.

“I was thinking, within a year I’ll be better, and I just really don’t see a light at the end of the tunnel,” she said.

‘It can’t be denied, COVID … damaged my cardiovascular system’

Smith’s case of COVID-19 was mild. He rode out the symptoms at home. But then, they never went away. They got worse, they morphed into new symptoms, they flared up or calmed down, coming in waves.

His “new normal” is carrying around an inhaler and taking medication for his tachycardia — when his heartbeat goes haywire. He eats differently now, limiting his sodium intake and swearing off caffeine.

His sense of smell and taste are still off-kilter. Peanut butter, chocolate and chicken are particularly nauseating. He used to love chicken sandwiches, but now it “tastes like I’m eating chicken that’s been doused in gasoline and sat out in the sun.”

He recently shared with his Facebook group a photo of the heart rate monitor on his smartwatch. The watch warned him that his heart rate was low. “I stood up, and it instantly shot up to 124,” he said. “At this point I’m used to feeling my heart catch flight, but it’s not any fun.”

Medication and lifestyle changes have helped better manage his symptoms, he told the group.

“But it can’t be denied, COVID has changed me and damaged my cardiovascular system.”

Smith encourages his Facebook group to share good news — a day with more energy, a child whose symptoms seem to be improving, or a new study on a potential treatment.

But increasingly, he is concerned about the future of Idahoans with long COVID.

“The longer this goes on, the longer people are untreated … that’s going to cause quite a strain in the years to come on the health care system,” he said.

He worries about the unseen toll of long COVID. The coronavirus has shown it can leave survivors with mental illness, sap them of energy for work or recreation, and leave them feeling isolated and alienated when doctors or loved ones dismiss the symptoms as psychosomatic.

Smith wants people in Idaho to understand that, if they’re paying attention only to the risk of death, they’re not seeing the whole picture.

“We talk about the recovery (rates), but those who are ‘recovered’ aren’t necessarily recovered,” he said.

“The most important thing to the long hauler community right now is empathy,” Smith said. “The last thing long haulers want to hear is your political stance on it, on the virus. They just know they’re dealing with an illness they haven’t encountered before, and their lives are changed by it. … What long haulers need is empathy, and sometimes they just need someone to talk to.”