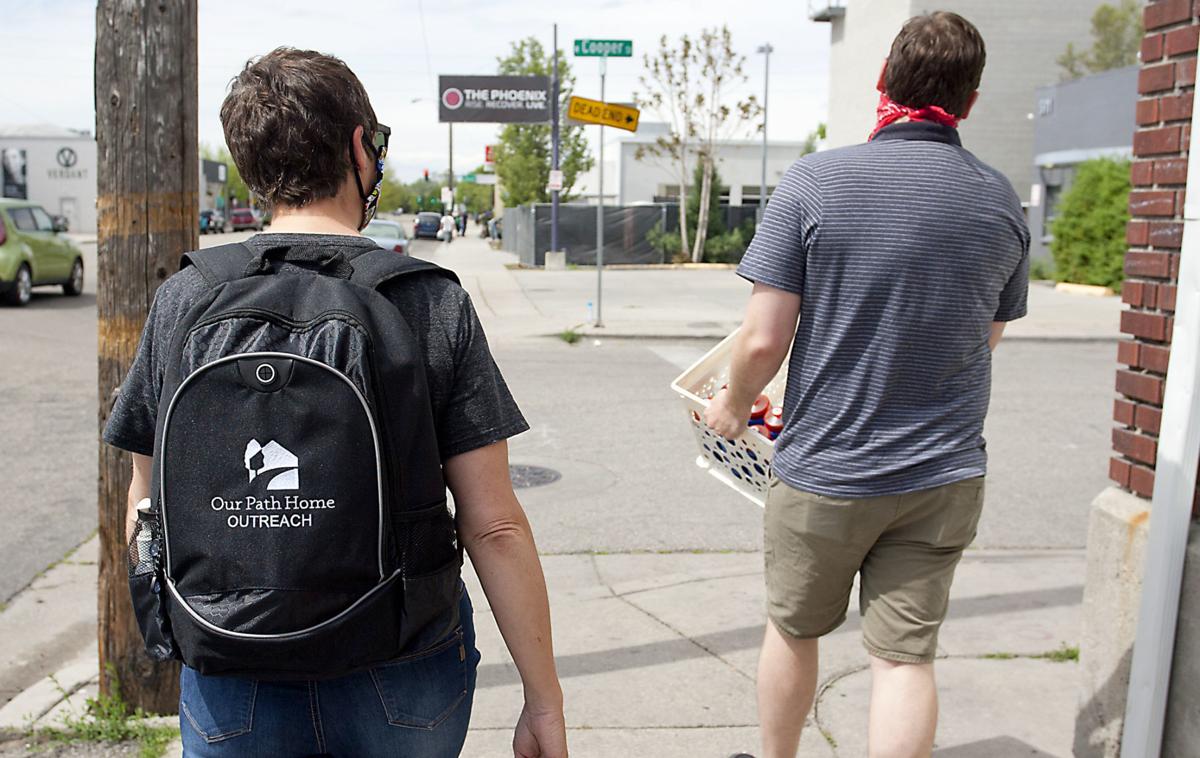 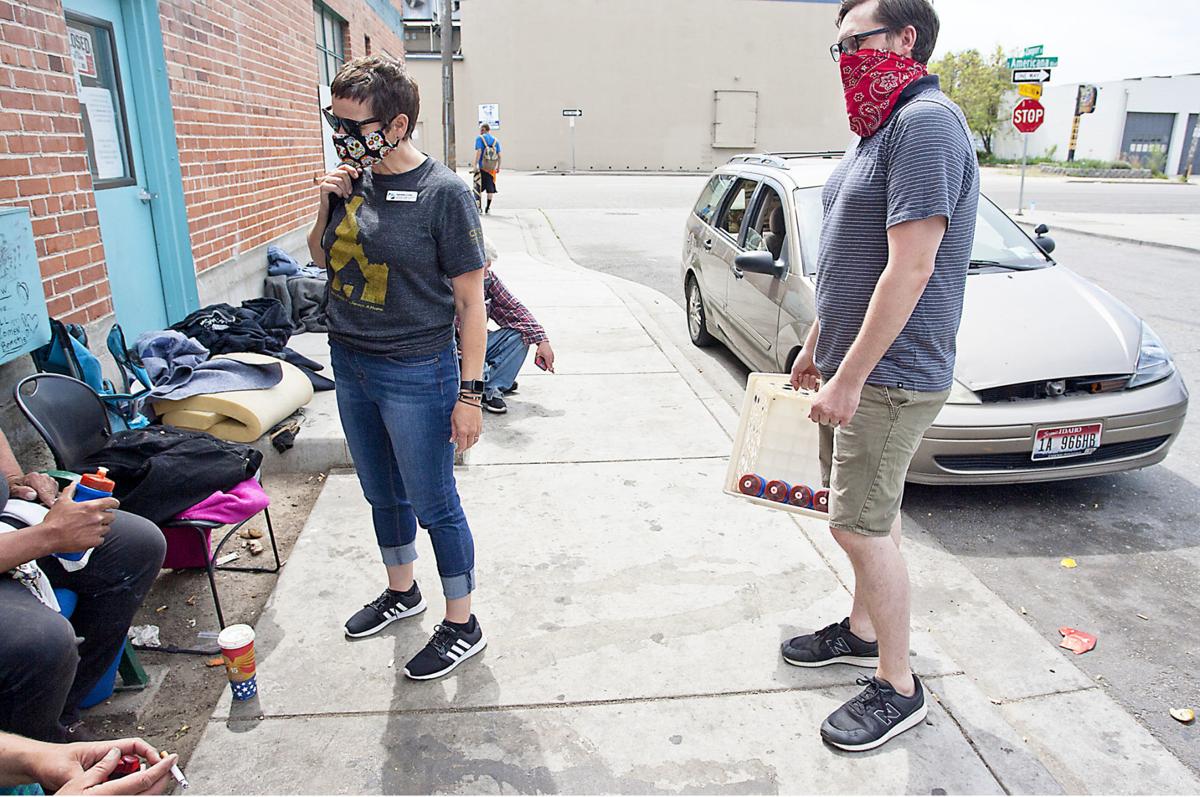 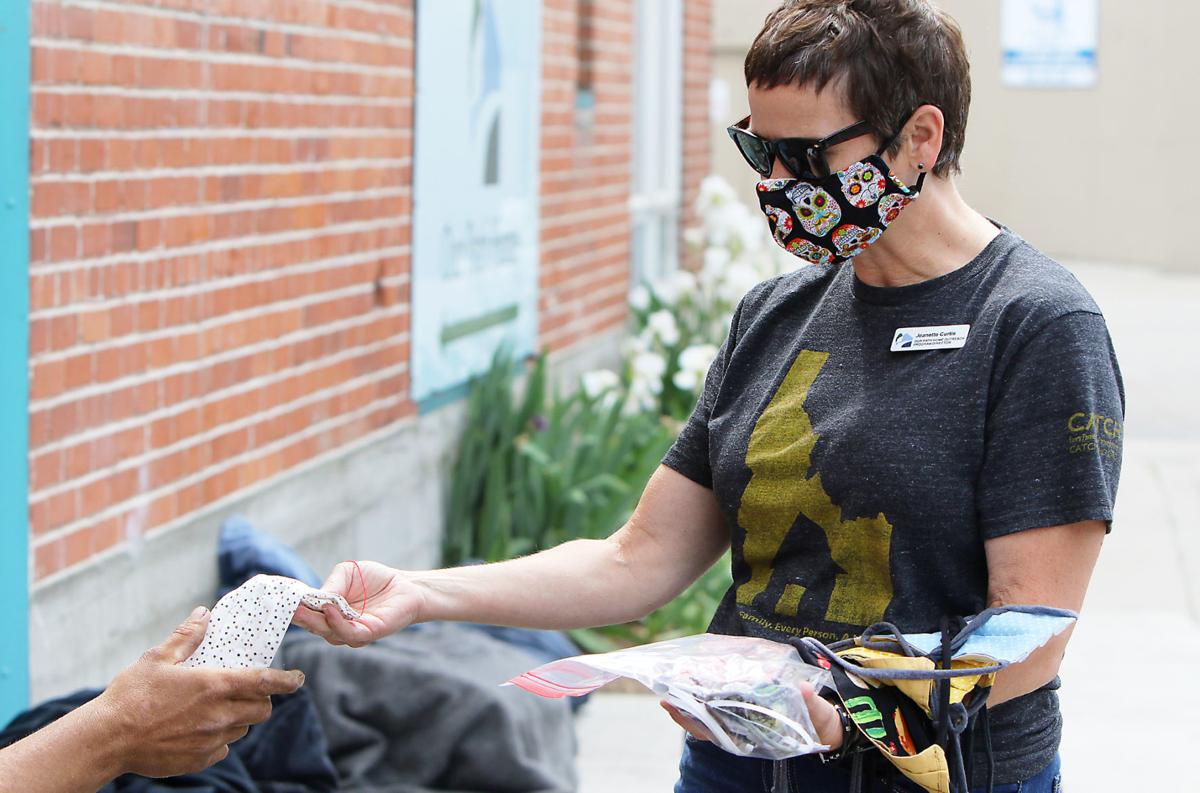 Jeanette Curtis, with CATCH, hands out a face mask to a member of Boise's homeless population, Thursday, April 30, 2020. 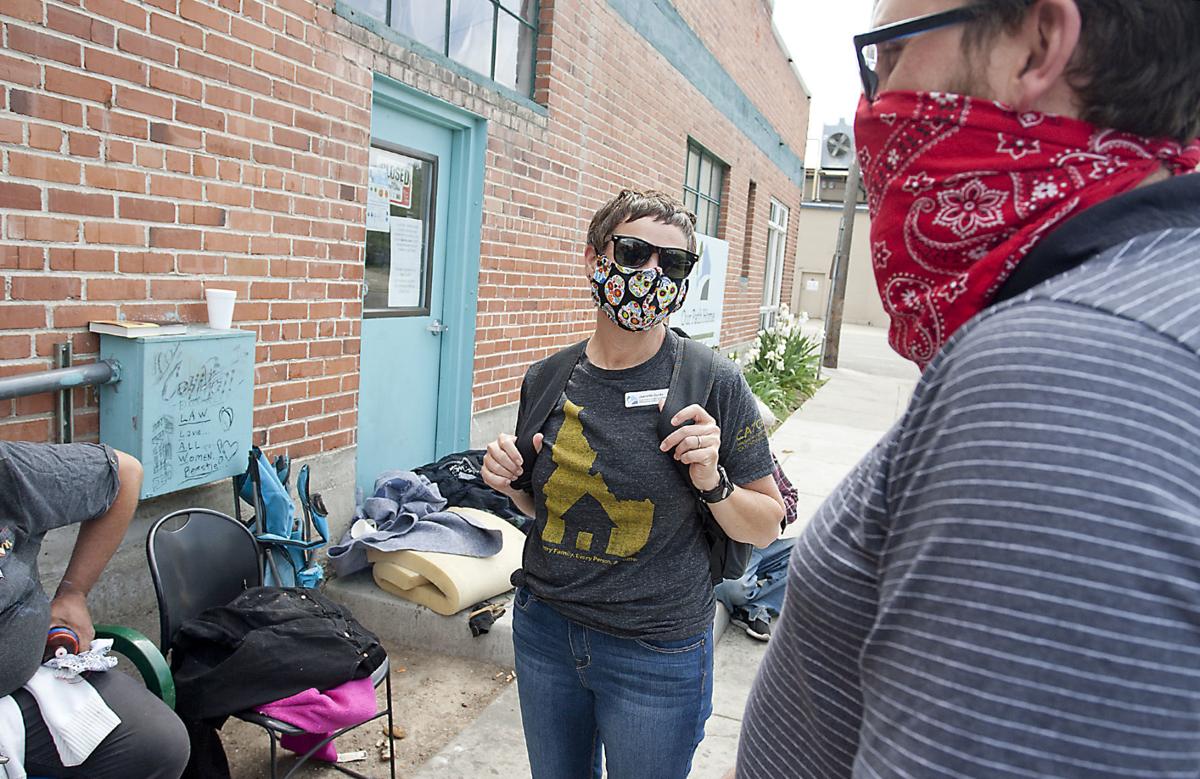 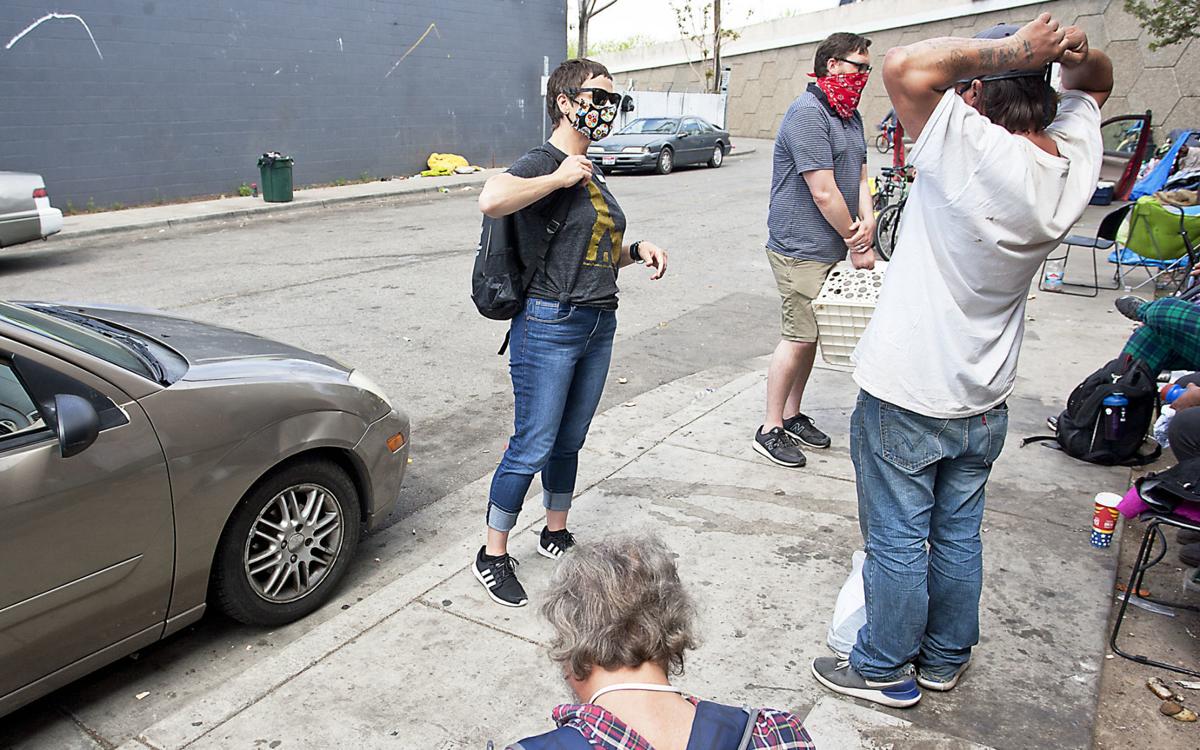 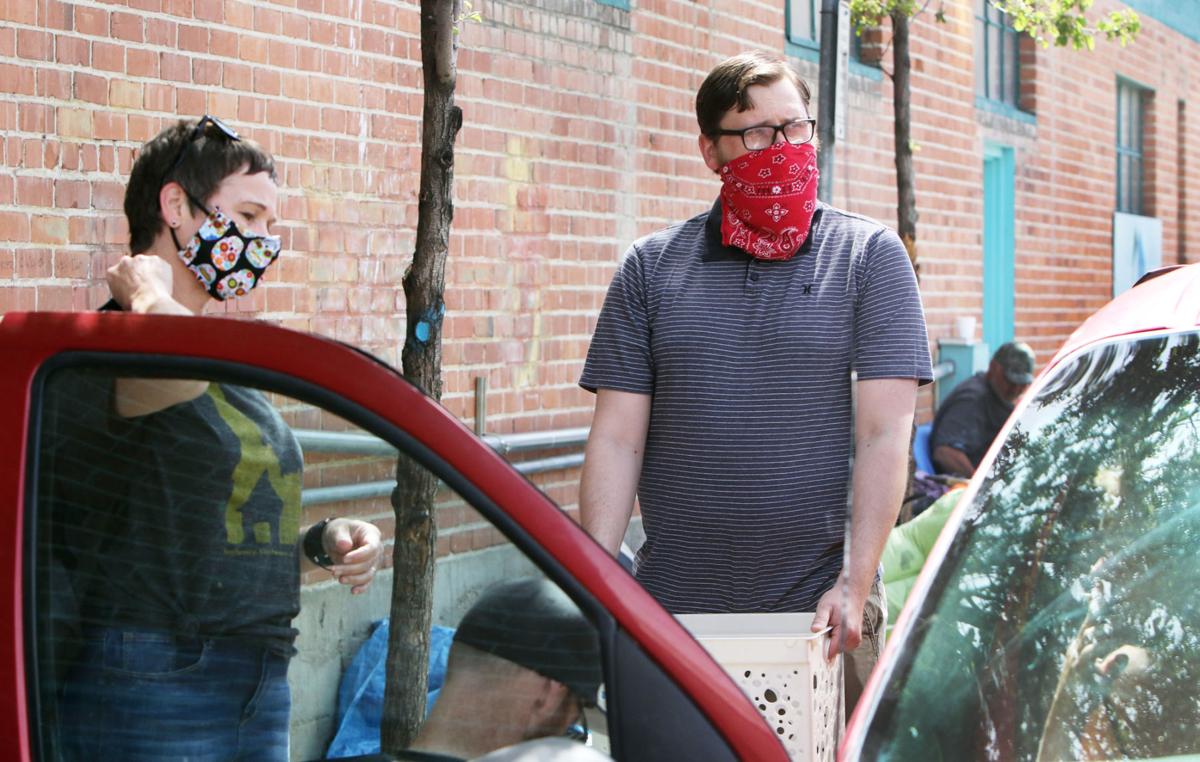 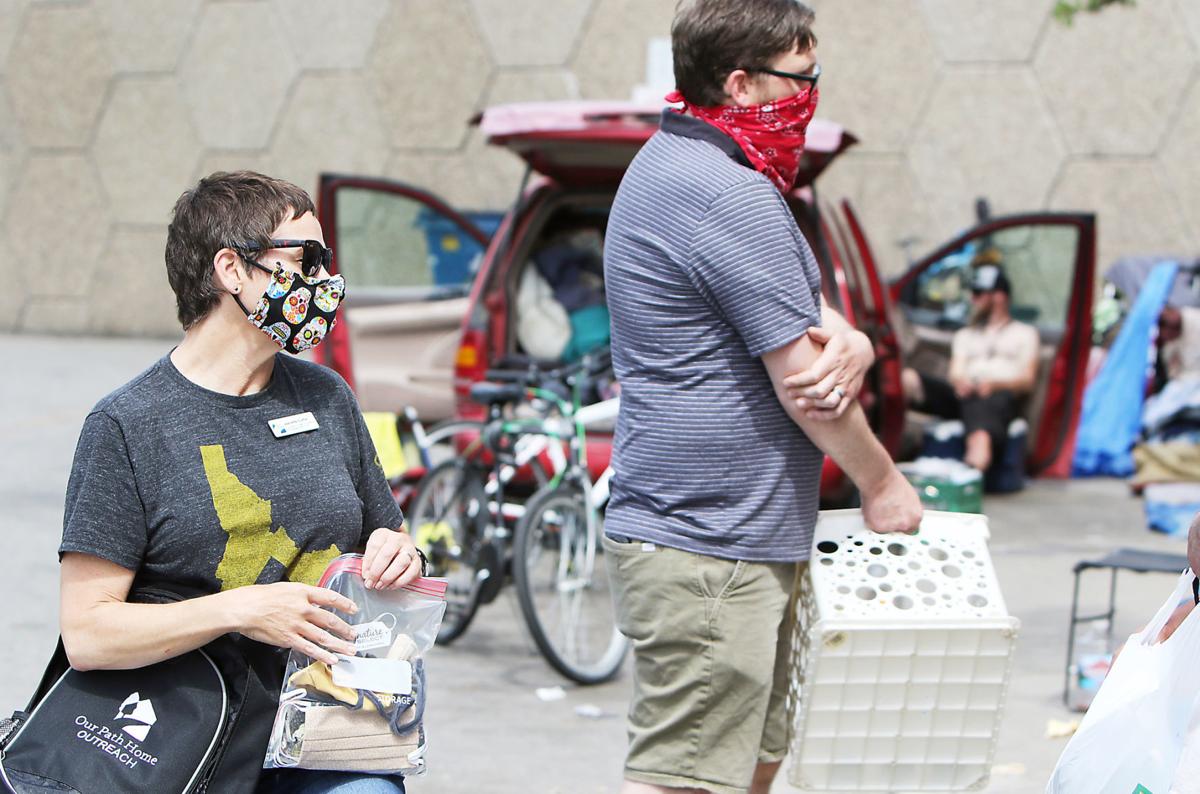 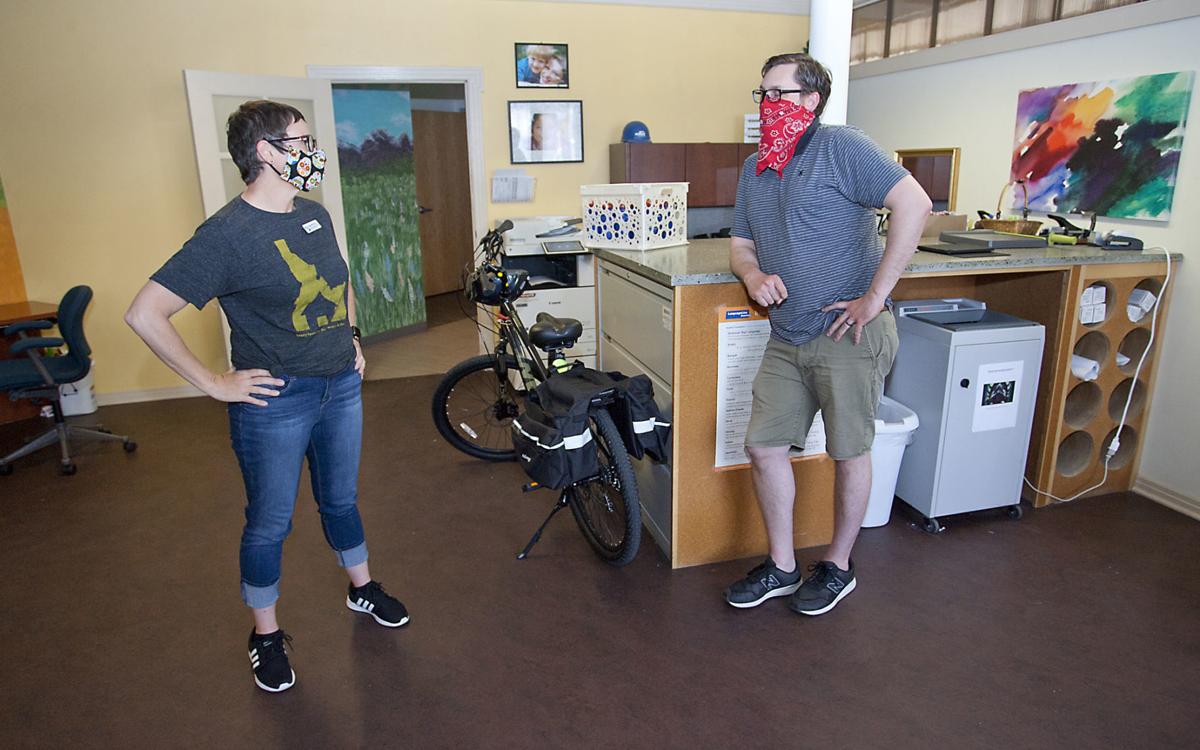 Jeanette Curtis and Casey McGee, with CATCH, discuss their plans for the day prior to heading out, Thursday, April 30, 2020.

Jeanette Curtis, with CATCH, hands out a face mask to a member of Boise's homeless population, Thursday, April 30, 2020.

Jeanette Curtis and Casey McGee, with CATCH, discuss their plans for the day prior to heading out, Thursday, April 30, 2020.

BOISE — Not everyone in Boise without a home of their own sleeps in the city’s two emergency shelters, but that doesn’t mean they aren’t in need of support.

CATCH, a Treasure Valley homelessness nonprofit, launched a new team of three social workers earlier this year specifically to reach out to those in Ada County experiencing homelessness who sleep outside. Several times a week, the small team hits the streets on foot or by bike in search of their clients to provide food, water and to help them get connected to supportive services such as medical care or mental health resources.

CATCH’s Outreach Program Manager Jeannette Curtis said her group of social workers, which started its work in February, is focused on the county’s most vulnerable residents experiencing homelessness who might not be aware of the services available. Their clients are often struggling with multiple issues, such as mental illness, addiction to substances or chronic health problems that make it extremely difficult to find housing.

“We don’t wait for people to come into our organization,” she said. “We are out there going to people wherever they are. Ultimately we want to figure out what their barriers are so we can get them housed.”

The funding for these positions came from the federal government's Substance Abuse and Mental Health Services Administration's grant program given to each state to fund services for those experiencing homelessness. Prior to 2020, these funds were given to nonprofit Jannus, but Curtis said the state changed how the funds were distributed and now CATCH is the recipient for Ada County.

The first step, Curtis said, is to make a connection with these residents and help overcome any mistrust they might have of the shelter system or other social services in the city. Once the social workers know the clients and their needs, they can start helping them with more intensive case management.

Every year, Boise and cities around the nation conduct a point-in-time count to see how many residents in the community are experiencing homelessness on a single night. The count reported 83 people in Ada County sleeping unsheltered during the January 2020 survey.

Sleeping in public is not permitted in Boise as long as there is room in the city’s two emergency shelters, Interfaith Sanctuary and the Boise Rescue Mission. The city's original ordinance, which made sleeping outside a ticket-able offense no matter the status of the shelters, was the subject of a 2009 lawsuit from several homeless residents that went all the way to the U.S. Ninth Circuit Court of Appeals. In the summer of 2019, the appeals court ruled that the city’s original policy violated the Eighth Amendment’s protection against cruel and unusual punishment, sending ripples across the western United States.

Boise’s previous mayor, Dave Bieter, moved to appeal the Ninth Circuit’s decision up to the U.S. Supreme Court, but the nation’s highest court declined to hear the case and left the appeals court’s ruling to stand. Since the city changed the law and allowed only tickets to be issued when the shelters were full, the ordinance is still on the books.

The Boise Police Department hasn't issued any citations for sleeping outside so far in 2020, according to department spokeswoman Haley Williams.

Just because Curtis and her team are going out to serve people who are sleeping outside, doesn’t mean they are encouraging camping or giving out supplies like sleeping bags and tents to their clients. She said their goal is to keep people safe and health no matter where they sleep, because going to a shelter might not be the best place for some resident.

“We work in close partnership with the shelters and we do try to encourage people to go to the shelters, but for a lot of folks we know that might not be the best choice for them,” she said. “They might have a pet or because of their severity of trauma history of mental illness shelter might be a triggering place for them.”

COVID-19 has also made staying in shelters more fraught than normal. Homeless shelters require residents to sleep and eat meals in close proximity to each other, which makes social distancing difficult. Earlier this month, both Interfaith Sanctuary and Boise Rescue Mission reported lower than normal occupancy rates.

In order to keep their clients safe, Curtis said her team has been offering face masks to those sleeping outside and instructing them to stay away from others while sleeping and moving about their day-to-day life. The social workers are also screening clients for symptoms such as fever and shortness of breath and referring them to the testing center specifically for those experiencing homelessness at Interfaith Sanctuary.

Despite the pandemic, Curtis said her team has not seen a large increase of people sleeping outside.

“I don’t feel like we’re seeing more people sleeping out than normal and the people we are seeing are the same people before the COVID-19 hit,” she said. “Both shelters are open and operational and they both have capacity, so it is an option for anyone who chooses to take that option, but whether it’s the safest option for everybody is up to them to decide.”