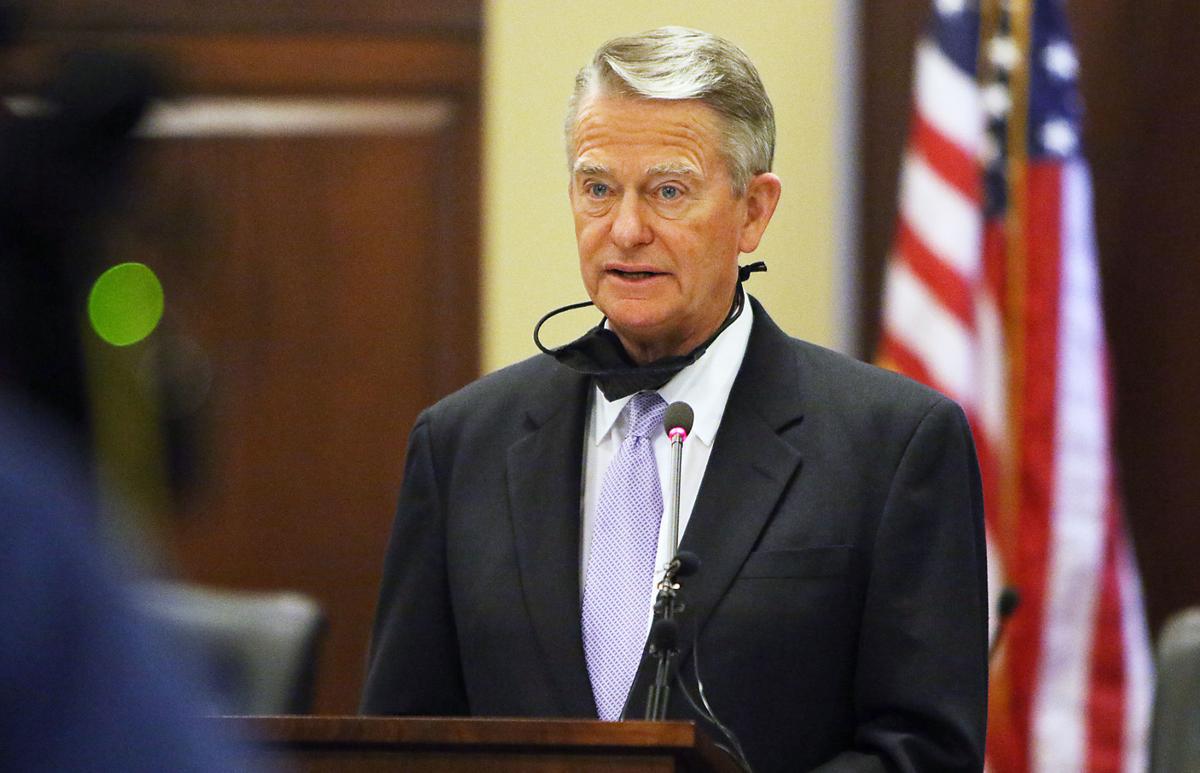 Gov. Brad Little, seen here on June 5 at the Idaho Capitol, has called for a special legislative session to convene Aug. 24. 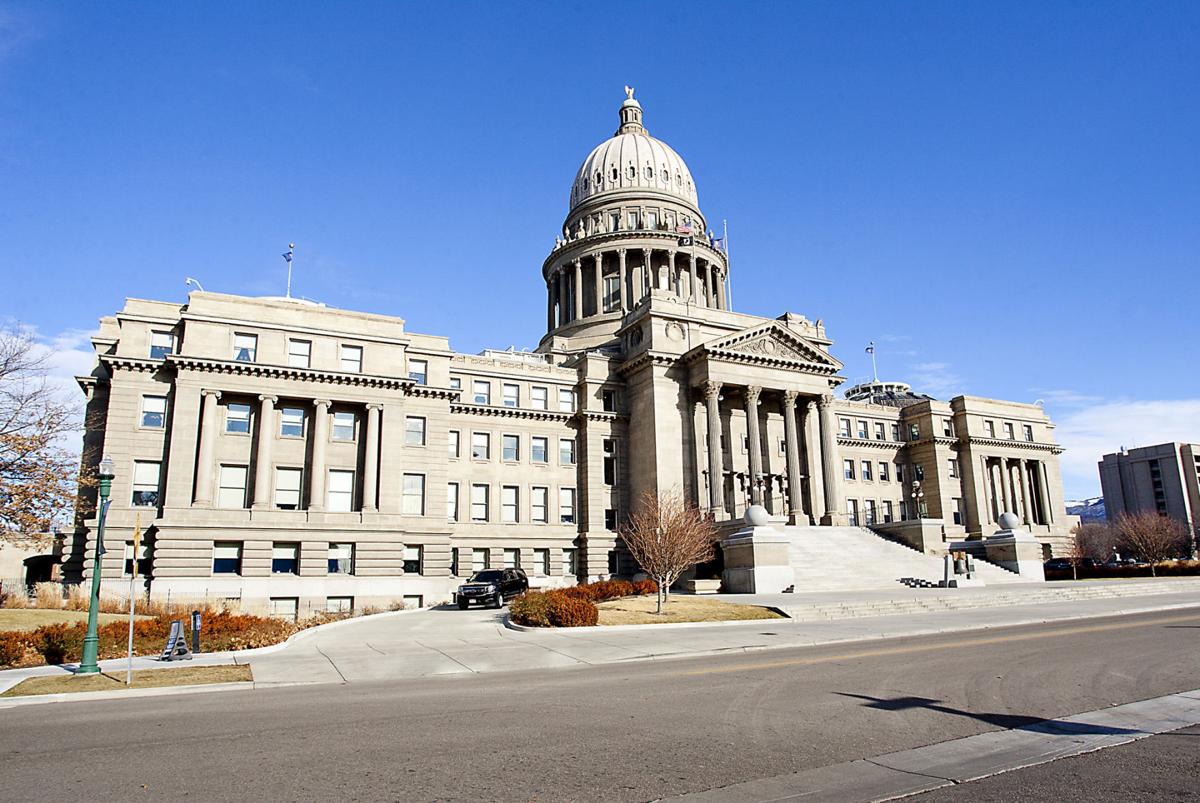 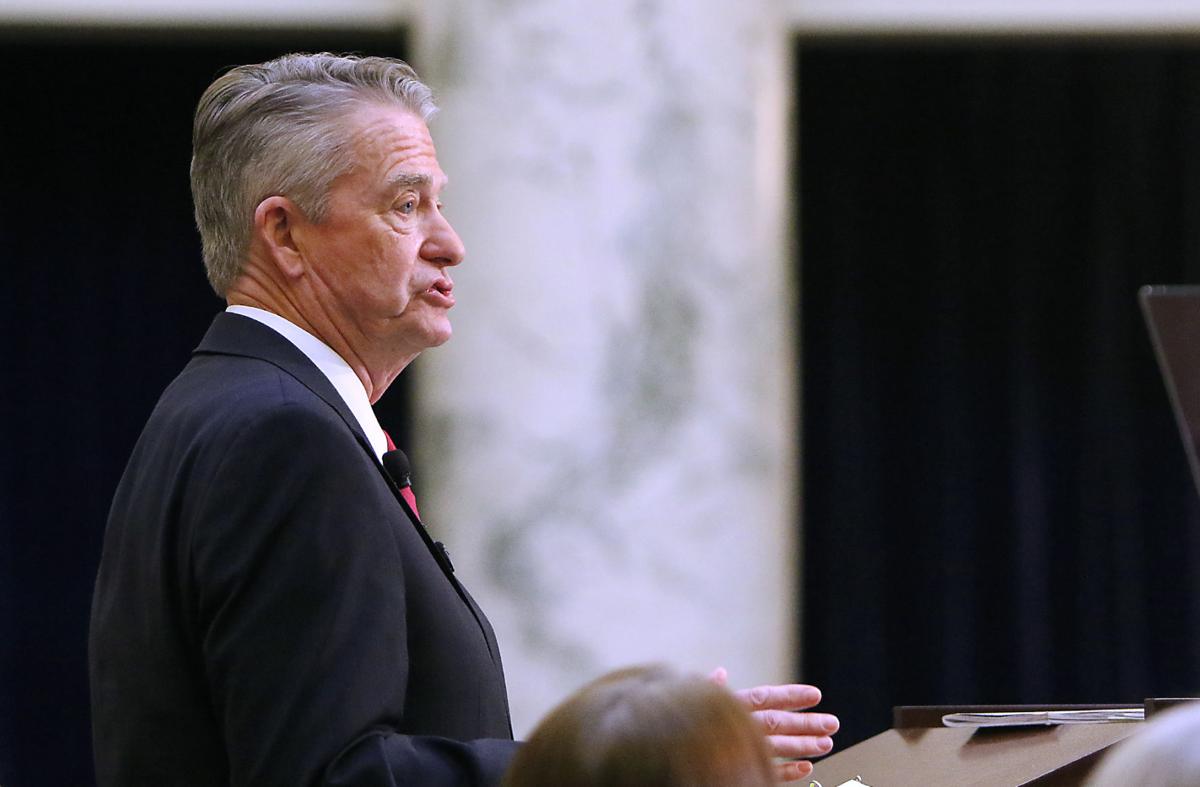 Gov. Brad Little delivers the annual State of the State address from the House chambers at the Idaho State Capital, Monday, Jan. 6, 2020. Little has called for a special session of the Legislature to convene Aug. 24. 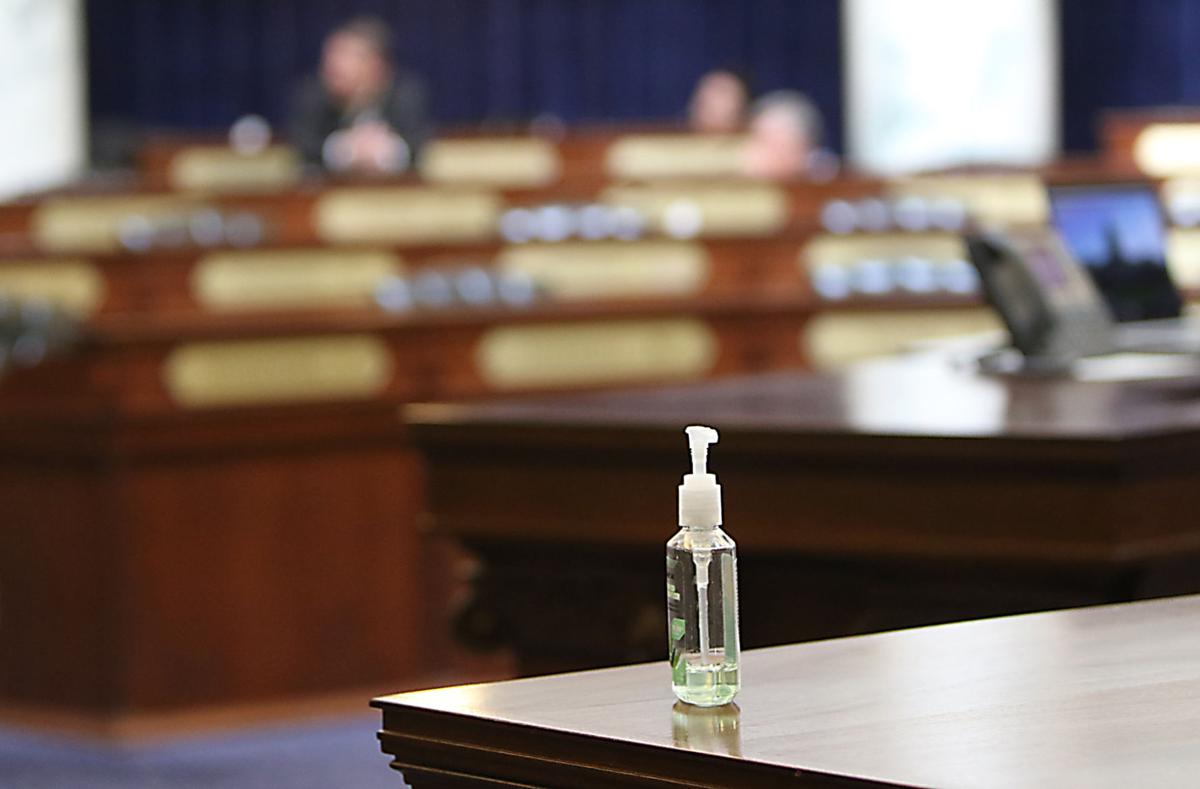 A nearly empty bottle of hand sanitizer rests on a table during a break in the House Chambers at the Idaho State Capitol, Thursday, March 19, 2020. The governor, prompted by legislative working groups, has called for a special legislative session to convene Aug. 24.

Gov. Brad Little, seen here on June 5 at the Idaho Capitol, has called for a special legislative session to convene Aug. 24.

Gov. Brad Little delivers the annual State of the State address from the House chambers at the Idaho State Capital, Monday, Jan. 6, 2020. Little has called for a special session of the Legislature to convene Aug. 24.

A nearly empty bottle of hand sanitizer rests on a table during a break in the House Chambers at the Idaho State Capitol, Thursday, March 19, 2020. The governor, prompted by legislative working groups, has called for a special legislative session to convene Aug. 24.

BOISE — Gov. Brad Little announced Wednesday that he’ll call the Idaho Legislature into a special legislative session on Aug. 24, though specific topics still are being negotiated.

The topics “could include the November general election and liability reform during emergencies,” the governor said in a brief announcement. However, the governor also informed lawmakers that he’ll only call the special session on topics on which lawmakers already have reached consensus about legislative changes.

“The discussions so far have been based around those two agenda items, elections and civil liability,” the governor’s press secretary, Marissa Morrison Hyer, said Wednesday.

Three legislative working groups have now voted to recommend Little call a special session of the Legislature, but only two of those have voted on specific proposals. Last week, on Thursday, the House and Senate Judiciary committees debated for more than three hours before their divided vote to recommend a special session to consider legislation to broadly provide immunity from lawsuits during all declared emergencies for businesses, government agencies, medical providers or others who make good-faith efforts to comply with laws and regulations.

Hours later, the House and Senate Education committees also voted to call for a special session, citing budget-flexibility proposals for schools now facing budget cuts, adjustments to school transportation funding and enrollment calculations, and clarifications on who has authority to close schools; but they didn’t endorse any specific legislative approach to any of those topics.

Under the Idaho Constitution, a special session of the Legislature has no power to legislate on any matter other than those specified in the governor’s proclamation convening it.

The two election-law changes endorsed by the State Affairs committees on Wednesday would make adjustments to various timelines and deadlines regarding absentee ballots on a one-time basis for the November election only; and allow counties to set up consolidated “voting centers” if they can’t open all their usual voting precincts.

The first proposed bill would allow absentee ballots that aren’t being sent overseas to be sent out 30 days before the election, rather than 45 days; and would allow clerks to begin opening and scanning returned absentee ballots seven days before the election, but not tabulating results until polls close on election night. County clerks from around the state said they need the changes to pull off an election that’s expected to be at least 75% absentee ballot, with the coronavirus pandemic severely crimping the numbers of poll workers they can recruit. They also said the changes would allow results to be tallied election night, rather than weeks later.

That measure won unanimous support from the joint working group; the voting centers bill was endorsed with just a handful of “no” votes.

The education committees, meeting as a joint working group, have another meeting scheduled Monday at 9 a.m. Another working group, consisting of the Joint Finance-Appropriations Committee, is scheduled to meet on Tuesday.

The governor’s announcement came out as lawmakers on the State Affairs Working Group were meeting on Wednesday morning, setting them buzzing; the governor had been visiting by phone with other lawmakers at the same time the panel was meeting.

Bobbi Jo Meuleman, Little’s director of intergovernmental affairs, came in to the meeting room in the state Capitol, and Senate Majority Leader Chuck Winder asked her to address the panel about the governor’s expectations.

“The governor did announce today in his calls ... that he does intend to call a special session on Aug. 24,” Meuleman told the committee, saying the governor wants “RS language that has been approved with a majority from the working groups that are meeting right now to be to the pro-tem and speaker on Aug. 14. Then that language is to be submitted to the governor by the 17th, and his intent would be then, within the next couple of days, to issue a proclamation for a special session on Aug. 24,” she said.

RS is the abbreviation for “routing slip,” which is what a draft bill is called before it’s introduced.

“He wants to see clear, concise and consensus language on topics to address for a special session,” Meuleman said. “That being said, anything that will be brought up in a special session will go through the normal legislative process.”

That potentially could include amendments, public hearings and more. “But in order to be brought up,” she said, it “does have to have consensus language.”

“The governor’s intent is he just wants to know that there is consensus on the issues that will be addressed in the proclamation,” Meuleman told the working group.

Idaho’s House Republican Caucus released a statement Wednesday applauding Little’s decision. “We thank the governor for making this critical choice and thank our members for making it possible through their tireless efforts on the various interim working groups set in motion by Speaker of the House Scott Bedke and President Pro Tempore Brent Hill,” Majority Caucus Chair Rep. Megan Blanksma said in the statement.

Senate Minority Leader Michelle Stennett, D-Ketchum, said, “I’m not surprised, considering all the pressure that he’s got, that he’s chosen to do that.” In June, 15 dissident House Republicans tried to hold their own self-called session to criticize the governor’s response to the coronavirus pandemic, but they had no quorum.

Stennett said she agreed that any election changes would need to be addressed quickly to accommodate the November election. But, she said, “Many of us did not want to go do a special session. I think the big problem is, if we have to follow our rules and Constitution, we can’t socially isolate and do this in a safe manner.”

More from the Idaho Press on the special session: