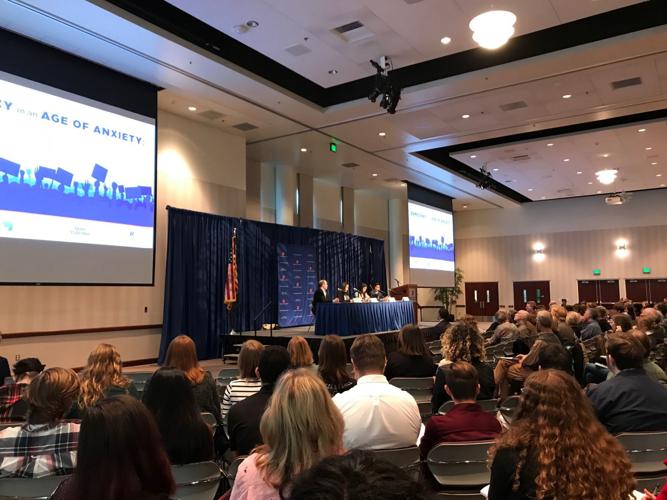 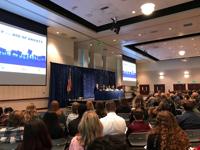 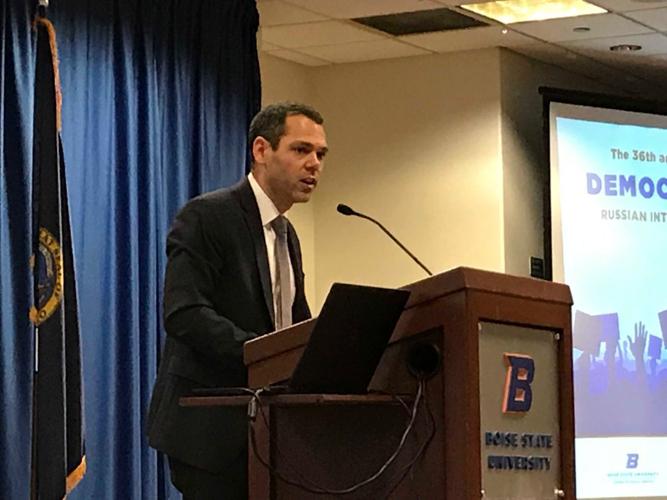 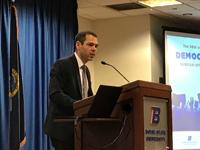 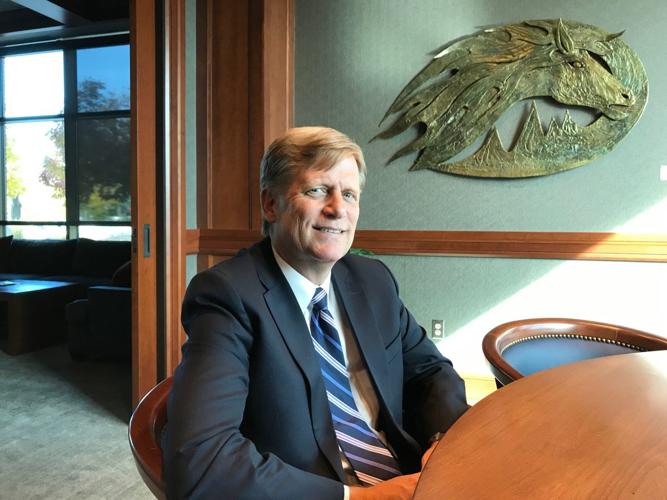 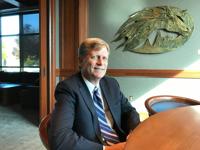 Michael McFaul, former U.S. ambassador to Russia and currently a political science professor at Stanford University and a senior fellow at the Hoover Institution, visits with reporters at Boise State University on Monday, Oct. 14, 2019.

BOISE — From China to Russia to the role of the United States on the world stage, more than 500 people gathered at Boise State University on Monday to learn about and discuss the issues at the 36th annual Frank Church Conference on Public Affairs.

“I think we need to have more people engaged in the debates about America’s place in the world,” said Michael McFaul, former U.S. ambassador to Russia and currently a professor of political science at Stanford University and a senior fellow at the Hoover Institution.

With 350 local high school students among those in the audience, the conference opened with a video clip of the late Idaho Sen. Frank Church in 1975 on “Meet the Press,” warning of the dangers that technology could make real if the U.S. government ever turned its surveillance capacity against its own people. “There would be no place to hide if this government ever became a tyranny,” Church warned. “I don’t want to see this country ever go across the bridge.”

But China already is moving to do exactly that, a panel of experts warned, aiming both at its own citizens and also the world. Panelist Irene Poetranto pointed to a particularly salient example of how China is expanding its influence around the world through technology: TikTok.

The popular app for creating and sharing short videos was developed by and is operated by a Chinese company that shares information with the Chinese government.

And Poetranto, a senior researcher at the Munk School of Global Affairs and Public Policy at the University of Toronto, noted, “They ban any content that could be seen as positive to gay people or gay rights … even in countries where homosexuality has never been illegal.”

“When they grow globally, they still have to abide by Chinese content standards,” Poetranto said. That means even a video showing a same-sex couple holding hands is banned on TikTok.

Poetranto noted that China and Russia have twice proposed international codes of conduct to the United Nations General Assembly, first in 2011 and again in 2015. They “emphasize state sovereignty … in the digital space above all else,” she said. “In essence, they believe in a state-driven, authoritarian approach to cyberspace.”

“The Chinese approach is finding a lot of resonance, especially in countries that have weak rule of law,” she said, where there’s concern that “fake news” being spread by apps or other means could trigger conflict and civil war.

Steven Feldstein, the Frank Church professor of public affairs at BSU, said the Chinese approach is “to ensure that citizens can only access a certain perspective.”

“You can see that in a place like Hong Kong,” Feldstein said. The pro-democracy protesters there, he noted are “very unpopular” in mainland China. “That shows you what you can do when you have a curated internet in which the state wields a heavy hand,” Feldstein said. “That ought to be concerning.”

Yet, panelist David Ashmore, senior director of litigation and IP transactions for Micron Technology, said, “It would be extremely painful and disruptive for Micron to disengage from China. We have upstream suppliers and back-end manufacturing there. … A huge proportion of our customers are either located there or have manufacturing facilities there — like Apple has all their iPhones assembled in China.”

The theme of this year’s conference was, “Democracy in an Age of Anxiety: Russian Intrusion, Chinese Confrontation, Populist Disruption.”

Russia, panelists at the conference said, has been engaged in a concerted campaign to interfere and disrupt democracies all around the world, in part through social media-based disinformation campaigns aimed at exacerbating already strong divisions over such hot-button issues as race, immigration, gun rights and more. The result is reduced trust both in one another as citizens and in the very institutions of democratic government.

“The Russians have almost won, in a way, if you look at the way Americans are talking about each other, and are talking about people who have different political views,” said James Kirchick, a visiting fellow in foreign policy at the Brookings Institution. “I’d be pretty happy about that if I was Vladimir Putin, because it makes it very difficult for us to act on the international stage when we’re so at each other’s throats.”

Greg Raymond, Boise State University professor emeritus, said, “A recent study was published in the journal Science, which tracked 125,000 news stories on Twitter shared by more than 3 billion people. And what they found was that false stories are 70% more likely to be retweeted than those that are not false. True stories took six times longer to reach a threshold of 1,500 people than false stories.”

Rob Berschinski, senior vice president for policy at Human Rights First, a former Air Force intelligence officer and Iraq veteran and former director of security for the White House National Security Council, said, “I think at the end of the day, what Vladimir Putin wants is a divided United States and a divided Europe that has less unity on major questions, in terms of Russia’s ability to maneuver both domestically and in terms of its foreign policy.”

“That includes to a massive extent the corruption that Putin has engaged in and his cronies have engaged in,” Berschinski said. “So at the end of the day, if the United States and various European countries are spending more of their time focused internally and less of their time confronting Russia for its actions, that works to Putin’s advantage.”

Putin loomed large in Monday’s discussions, for good reason. McFaul, who recently published a book about Russia titled, “From Cold War to Hot Peace: An American Ambassador in Putin’s Russia,” said he first met Putin in the spring of 1991, when Putin, a former KGB agent, was working for the mayor of Saint Petersburg.

“His first office he ever ran for was president — not unlike our current president,” McFaul said.

When McFaul was representing the United States as its ambassador to Russia, he said Putin was convinced he was there to foment a revolution against Putin, an idea McFaul termed “crazy,” but that led to extensive harassment both of McFaul and his family. Now, McFaul is on a sanctions list; though he lived in Russia for years, often as part of his academic research, he’s forbidden from going there now.

The arc of U.S. relations with Russia and the former Soviet Union stretched from the combativeness of the Cold War to a “euphoric moment” in 1991-92 when the two countries seemed poised for a collaborative relationship, he said, to today.

“Now we’re back to conflict,” the former ambassador said.

Though there are many explanations, he said his favored one is this: “It is not determined by geography or history or the balance of power in the international system, but it has to do with individuals and the decisions they make — in particular Vladimir Putin and the decisions he made.”

Putin has been in power in Russia for nearly two decades.

“I believe in what Ronald Reagan said: Peace through strength,” McFaul said. “We’re not out to threaten Russia. We’re out to keep the peace.”

But Putin’s aggression, he said, threatens that. “If we do nothing, he’ll continue to annex territory, and we might stumble into another war in Europe.”

Another figure whose decisions loomed large over Monday’s discussions: President Trump, particularly given his unorthodox and fast-changing positions on foreign policy matters, including the recent precipitous withdrawal of U.S. troops from part of Syria.

“I think we’ve done a lot of damage to the leading role that we’ve had in the world the last couple of years,” McFaul said. He said the damage is repairable. But, he said, “I’m nervous about our era right now.”