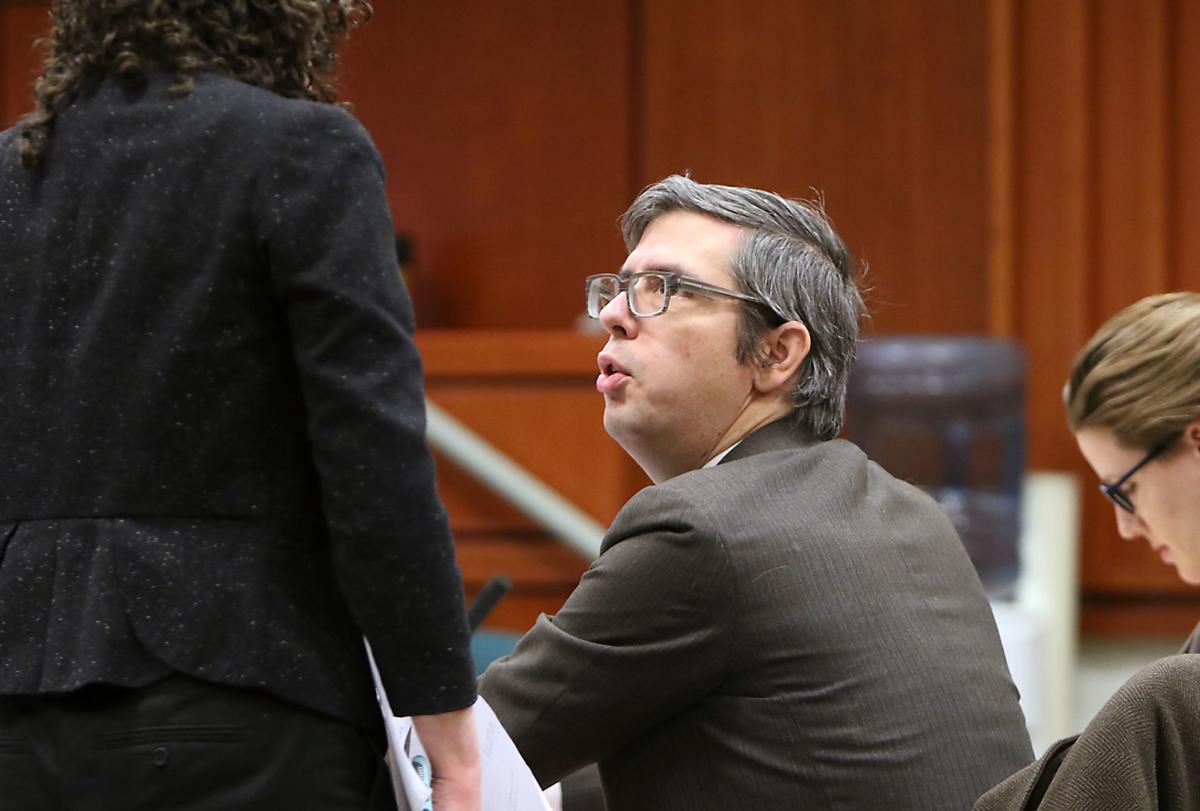 ACLU of Idaho attorney Ritchie Eppink, at right, confers with University of Idaho professor Aliza Cover prior to the start of court proceedings at the Ada County Courthouse, Friday, Feb. 1, 2019. 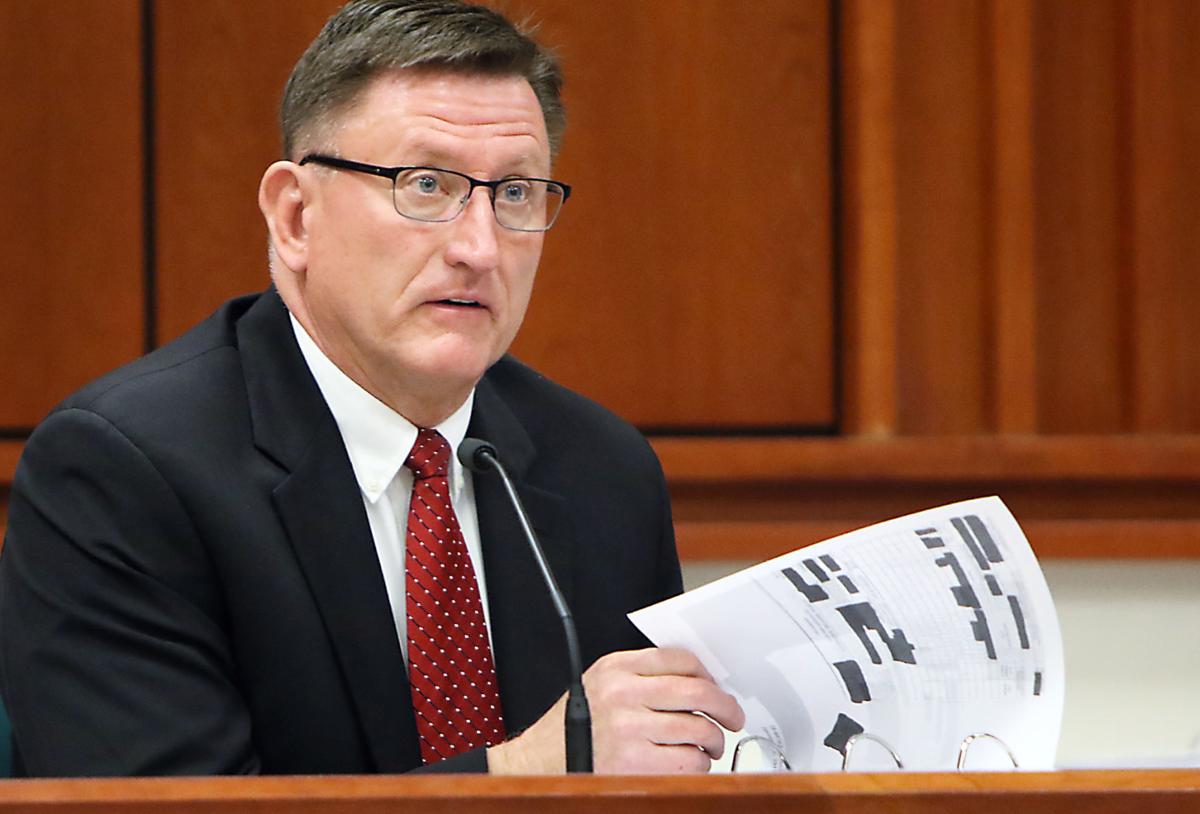 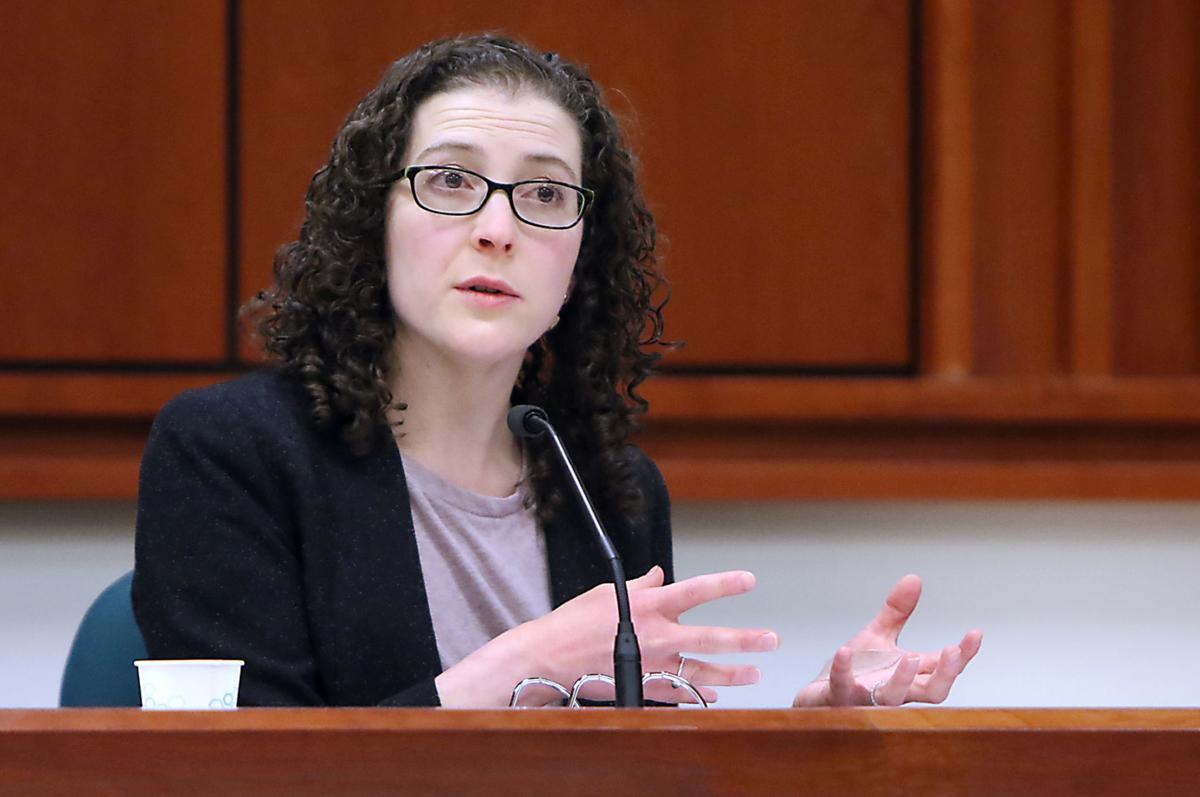 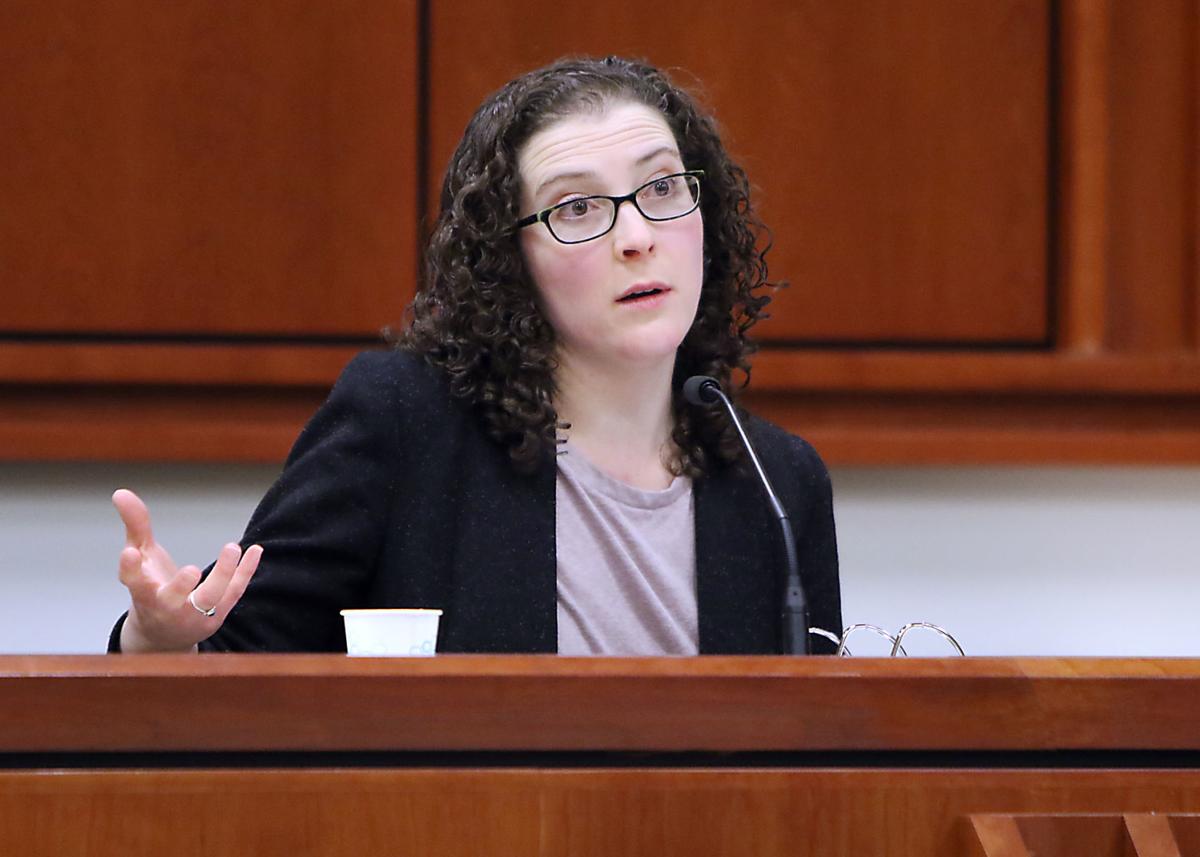 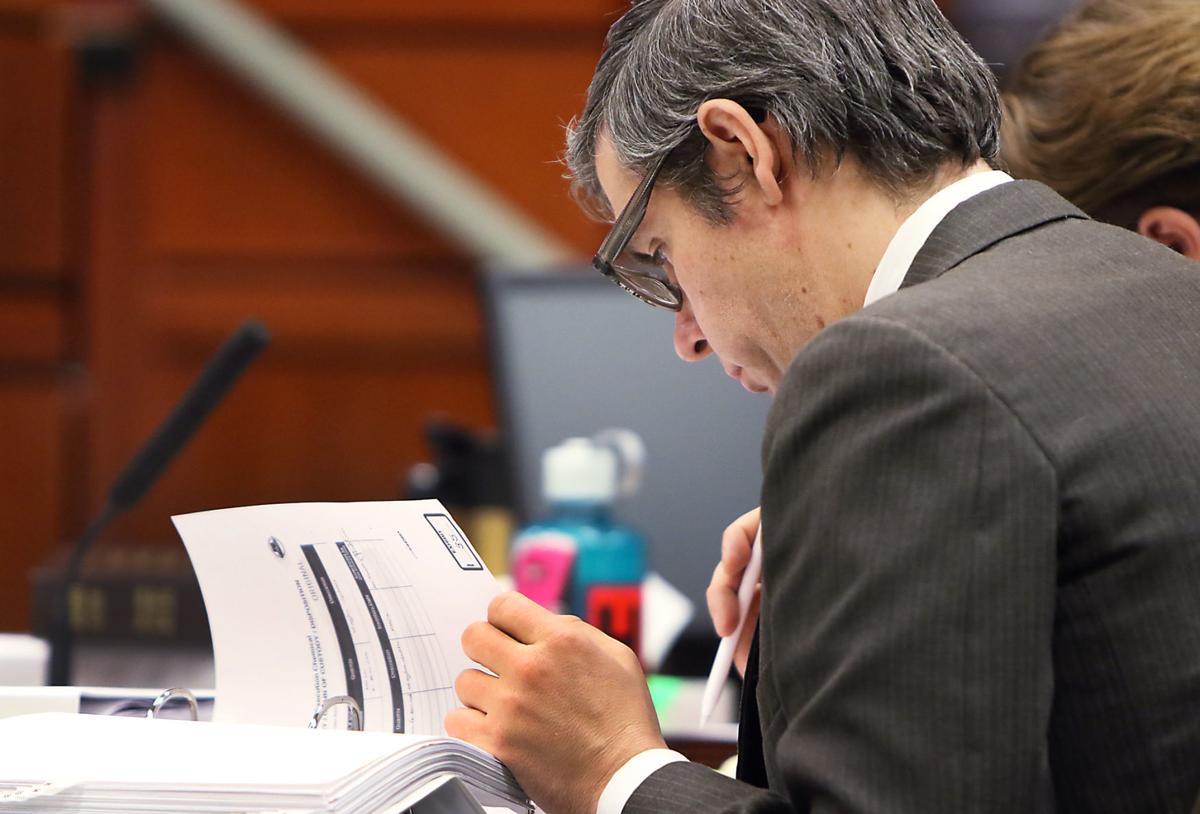 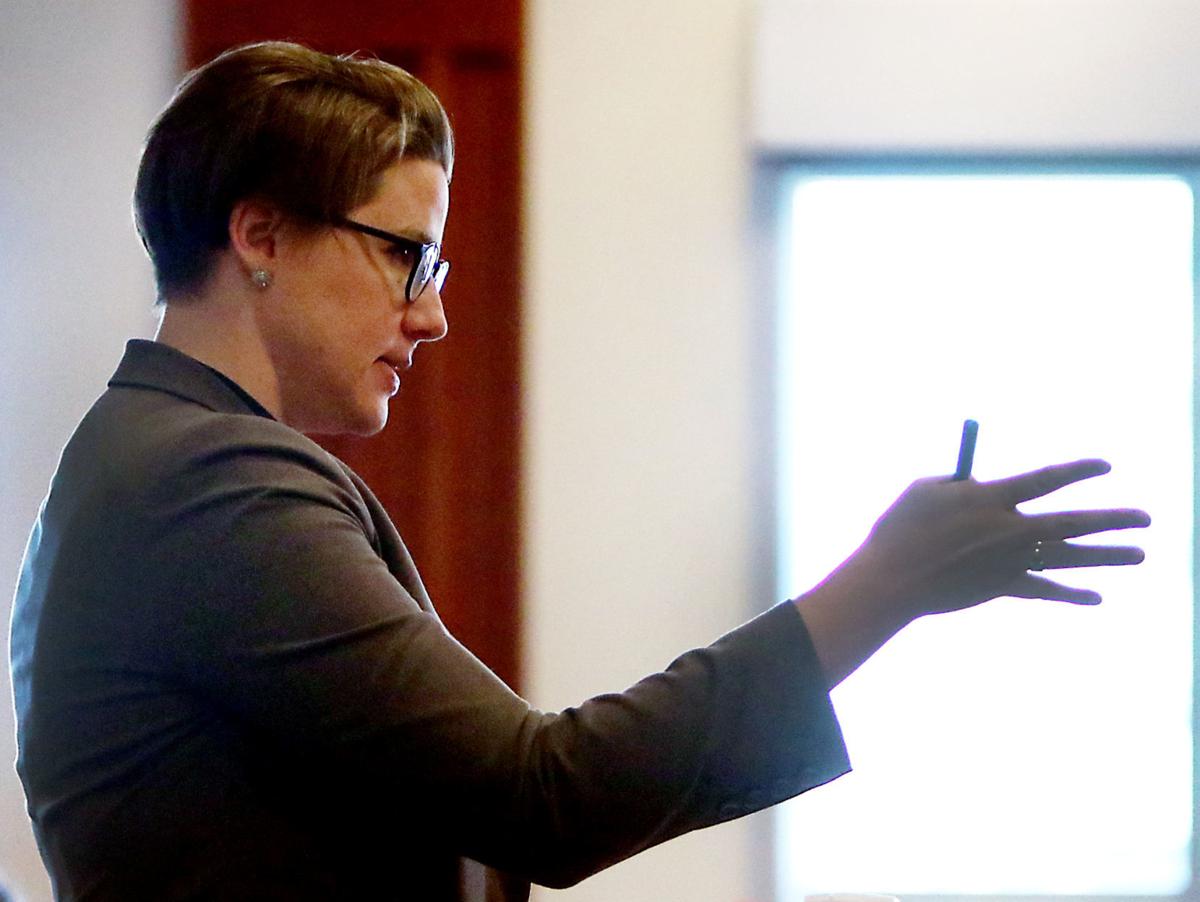 Molly Kafka, attorney for the ACLU of Idaho, directs questions to a witness, Monday, Jan. 28, 2019.

ACLU of Idaho attorney Ritchie Eppink, at right, confers with University of Idaho professor Aliza Cover prior to the start of court proceedings at the Ada County Courthouse, Friday, Feb. 1, 2019.

Molly Kafka, attorney for the ACLU of Idaho, directs questions to a witness, Monday, Jan. 28, 2019.

BOISE — The Idaho Department of Correction tracked execution-related expenses in three different books to water down the total costs, a former purchasing agent with the department said in court Friday.

The department kept three sets of books because department officials “did not want to show a tremendous amount of money being spent for the execution as well as for the anonymity for those involved in it,” according to that former agent, Joanne Sooter.

Sooter worked for the department during the course of two executions in 2011 and 2012. Her job, she said, was to ensure all purchases by the department were conducted properly.

The correction department is being sued for alleged failure to provide execution-related public records to an Idaho professor. When reading about the lawsuit, Sooter felt compelled to speak up about the department’s unusual accounting practices when tracking execution expenses, she said in court Friday.

Friday was the fourth day of trial in a case brought by University of Idaho law professor Aliza Cover. Cover in September 2017 asked IDOC for information about chemicals used in lethal injections during Idaho executions in 2011 and 2012, as well as drugs purchased for future executions. The department denied much of that information, saying if the source of its drugs became public, the outcry against the vendor would make it harder for the department to carry out executions in the future.

The trial began Monday at the Ada County Courthouse.

On both Wednesday and Friday, Cover testified it appears from documents high-ranking department officials were using cash to make purchases of execution drugs.

Two high-ranking Idaho Department of Correction officials — then-administrator Kevin Kempf, as well as Sooter’s boss Theo Lowe, then the department’s chief financial executive officer — were listed as “vendors” on audit forms. They were paid $16,383 and $10,372.25 respectively. It was the only time she remembered employees appearing on audit forms, Sooter said. Notes associated with those expenditures indicate only the spending was for “execution.”

Cover herself, who testified in court Friday morning, pointed out that handwritten next to the budget line for $10,372.25 are the words “advances? Protection of officers? Theo call me.”

In court Friday, Sooter said the department’s practice to keep three books related to execution-related expenses was something she hadn’t previously encountered in her 20 years in accounting. She claimed Lowe told her if anyone filed a public records request asking for execution-related costs, they should be given the first book. They’d probably have more questions after that, Sooter remembered Lowe telling her, so they should then be provided with the second book which included a “higher dollar amount” to “hopefully appease them.”

The third book, Sooter said, included the actual costs of the 2011 and 2012 executions, as well as full information about people associated with the execution.

Lowe said in court Friday she didn’t remember any such conversation with Sooter. She said the only tangentially related execution information that would have been kept separate from other records was the cost of remodeling at the Idaho Maximum Security Institution for a new execution chamber in the 2011 execution of Paul Rhoades. The reason for that, she said, was because it wasn’t solely related to that single execution — it was designed to be used multiple times.

When ACLU of Idaho attorney Molly Kafka asked her if she’d ever prepared separate financial documents for public use and internal use, Lowe replied “I don’t think so.”

Sooter wasn’t directly involved in execution-related purchasing either, she said, so her knowledge of what was in the three books was limited.

“I was informed by my manager the prisons division requested (purchasing agent Bob Morlan’s) assistance ... so I was told he would be taking the lead,” Sooter said in court.

Part of the reason for the separate expense books, Sooter said, was to provide anonymity to those involved in the execution process.

Yet that anonymity was exactly why Cover, the law professor, filed the request in the first place, she said in court Friday morning. In recent years, prison systems have obtained lethal chemicals for executions through illegal means. Earlier in the trial, department officials admitted Warden Randy Blades of the Idaho Maximum Security Institute in 2011 had emailed Chris Harris, an India-based drug merchant who sells lethal chemicals to American prison systems.

Although Cover said there was no evidence the department actually got the drugs from Harris, Idaho Department of Correction deputy director Jeff Zmuda admitted he did not turn that email over to BuzzFeed News in 2015 when the news organization asked about correspondence with Harris — even though it remained, printed out, in a filing cabinet in Zmuda’s office.

The department spurned Cover’s request as well, she and the ACLU of Idaho say. Initially, if offered her 49 partially redacted pages. Officials have since found more than 3,000 pages of information that fell within the scope of her request and should have been given to her initially.

On the stand Friday, Zmuda said the department couldn’t locate documents related to executions in 1994 and 2011. These so-called chain of custody forms track who within the department is in possession of the lethal chemicals used in executions and when they have them.

Jessica Kuehn, the deputy attorney general representing IDOC in the case, challenged Cover during cross examination. She pointed out the public didn’t need to know the name of vendor of lethal chemicals to participate in public discourse related to the death penalty — they could still vote for legislators and stage protests based on their convictions.

Cover admitted that was true, but her concern had more to do with the manner in which the executions were carried out. People die prolonged, tortured deaths if prison officials use chemicals that are expired or aren’t potent enough, and the name of a chemical vendor could reveal its track history and the quality of the chemicals it sells, she said.

“If the public is not able to have this information about those issues, the public cannot come to a decision on its moral view about the punishment that is occurring,” she said.

Kuehn reminded Cover that past witnesses had said lethal chemicals are hard to find, and the naming of a source could lead to a “chilling effect” on other potential sources of drugs. That would keep the Idaho Department of Correction from carrying out future executions, she said. The public didn’t need to know where the drugs came from in order to participate in the conversation.

Earlier in the week, 4th District Court Judge Lynn Norton had ordered the department to release a receipt from a compounding pharmacy. Even though the department contends it never used the drugs from that exact purchase, ACLU of Idaho attorney Ritchie Eppink still believes it would identify the name of a source of drugs used during the 2012 execution of Richard Leavitt. In deposition with witnesses, it was revealed that compounding pharmacy can no longer supply drugs, as it couldn’t comply with regulations.

The department and the Idaho Board of Correction opted to file an appeal to that ruling, Kuehn said in court Friday morning. In the face of that move, Norton decided to change her opinion, because an appeal could take up to two years to get to a higher court, and she felt “justice delayed is justice denied.” She would rule on the receipt — just like everything else — at the end of the trial.

Attorneys had to debate the appeal before they could begin calling witnesses for the day. In his legal arguments to the judge before the start of testimony Friday morning, Eppink used Kuehn’s own chilling effect argument as a point in favor of releasing the names of drug providers. He said public interest in the department’s sources is so high, that if it were to be released, it would have an actual effect on economic markets. That fact alone proved it was in the public’s best interest to know.

”(IDOC’s) argument at this point is crystal clear — this information is so important that we can’t release it, because it would change the way we do things,” Eppink said.

“The power of one’s advocacy depends on how much information one has at one’s disposal,” she said in cross examination.