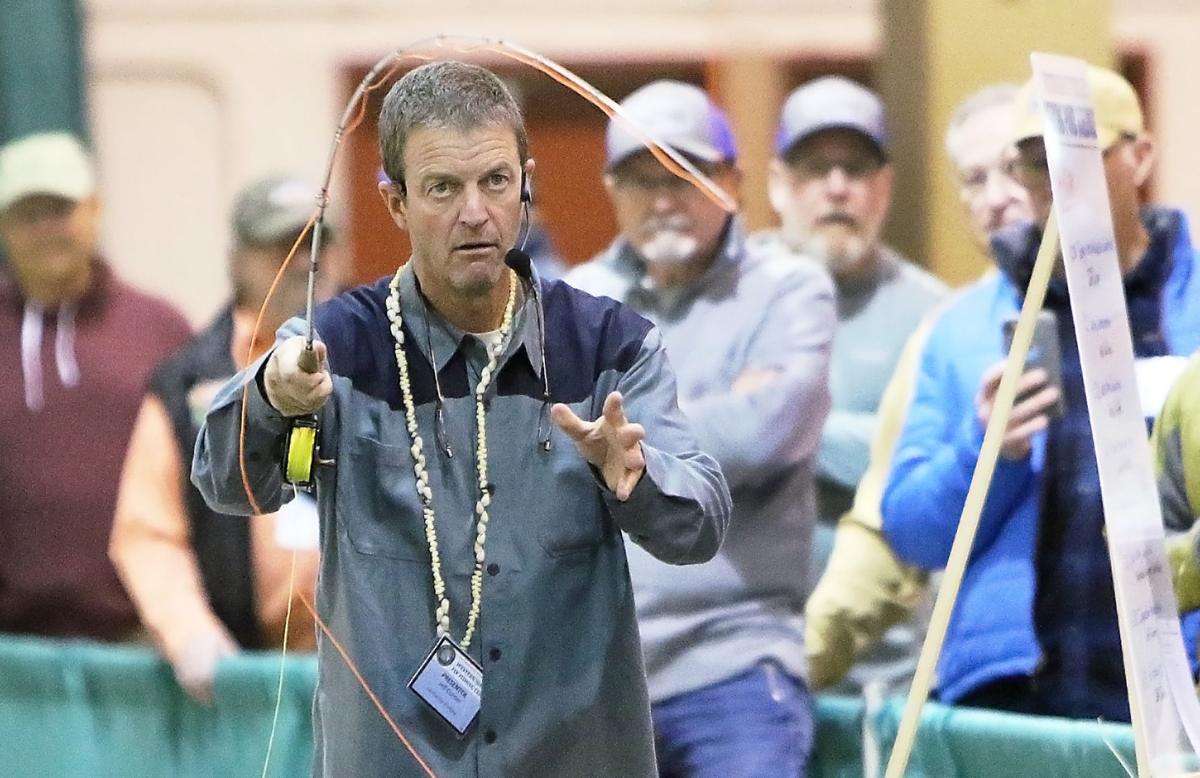 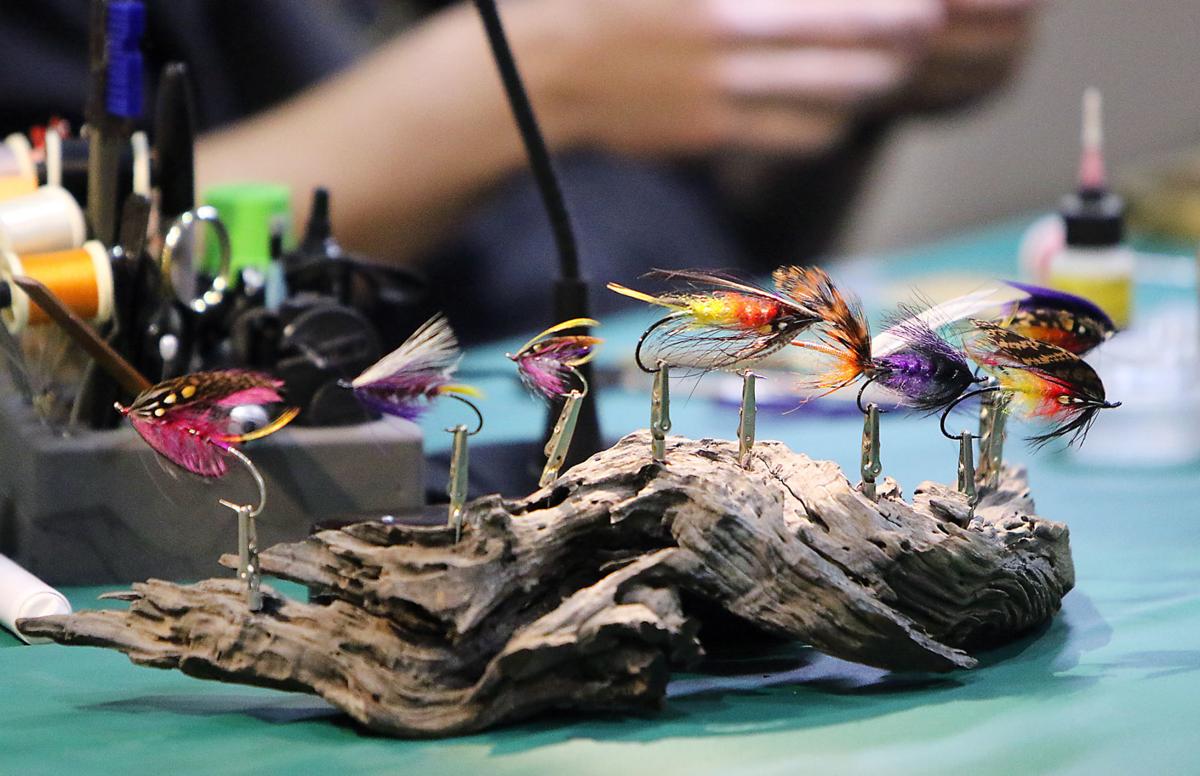 A selection of completed flies on display in front of a fly tyers booth during the Western Idaho Fly Fishing Expo at Expo Idaho in Boise, Friday. 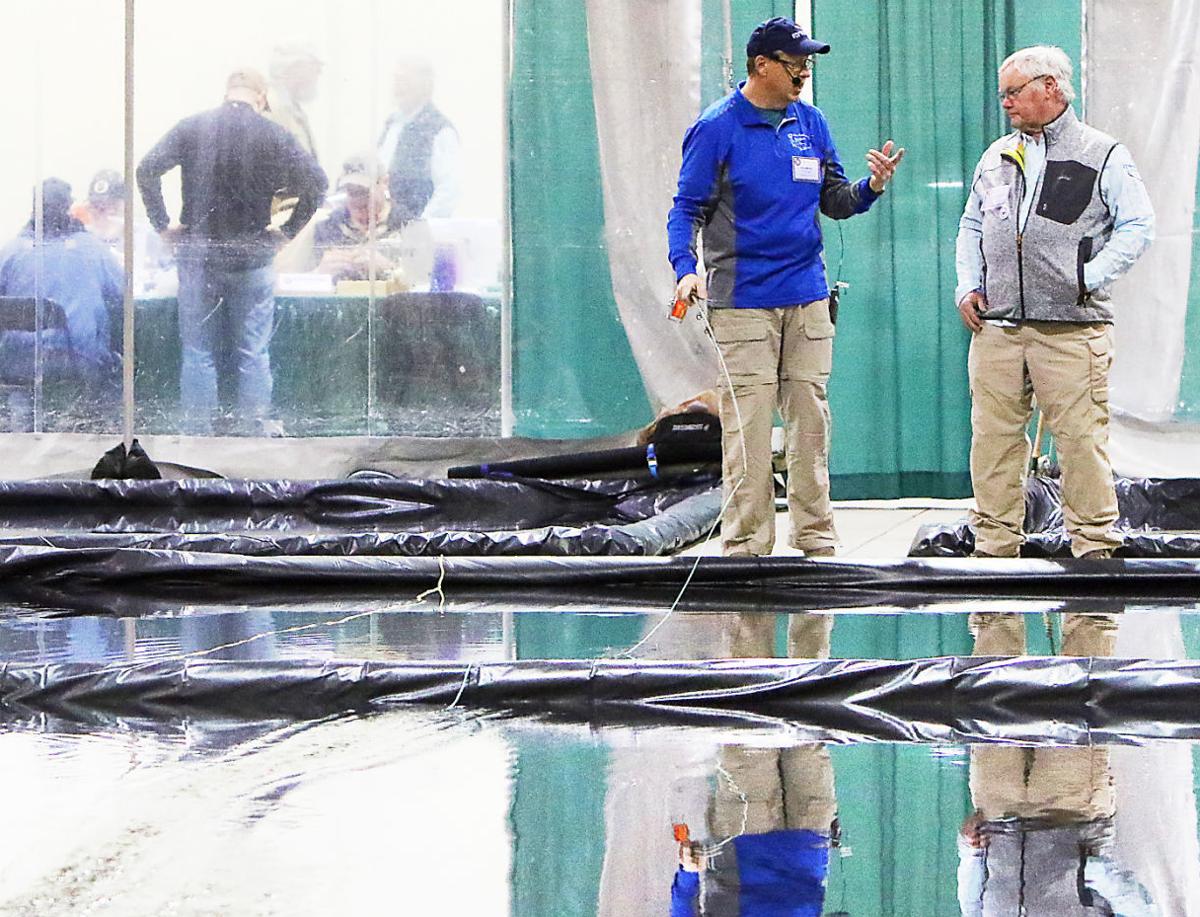 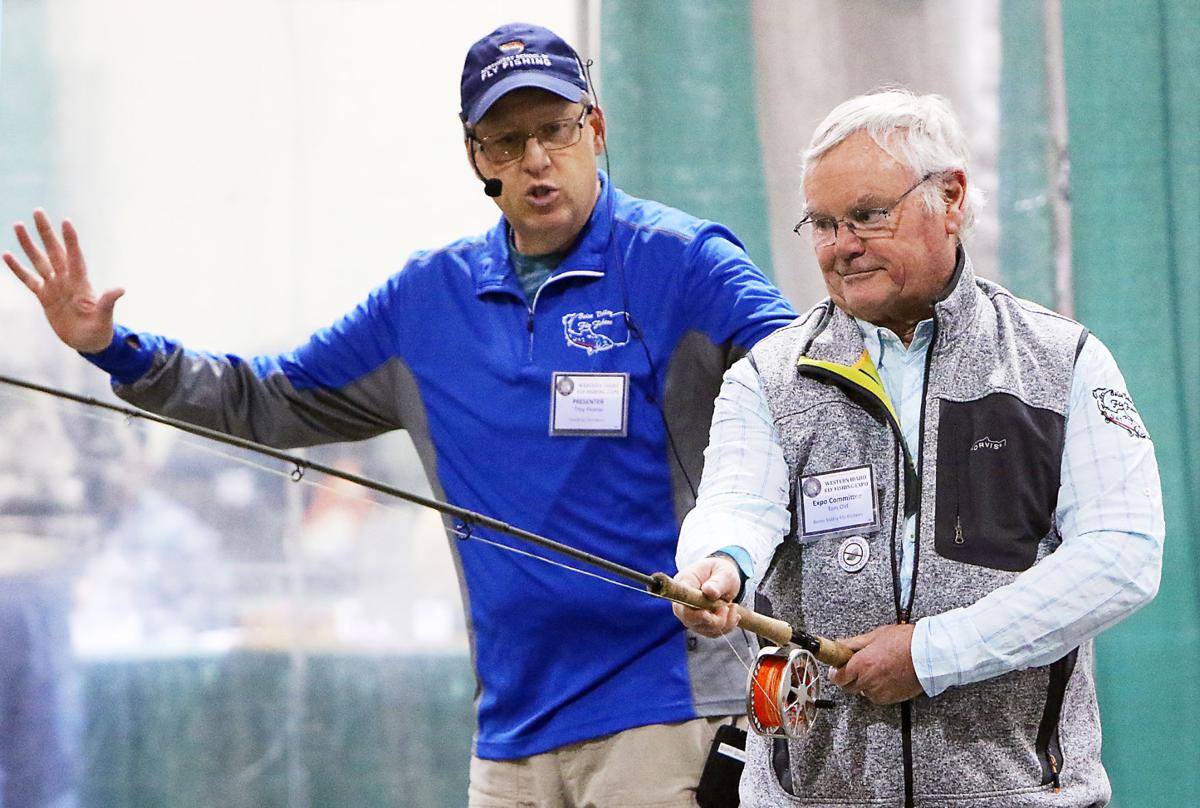 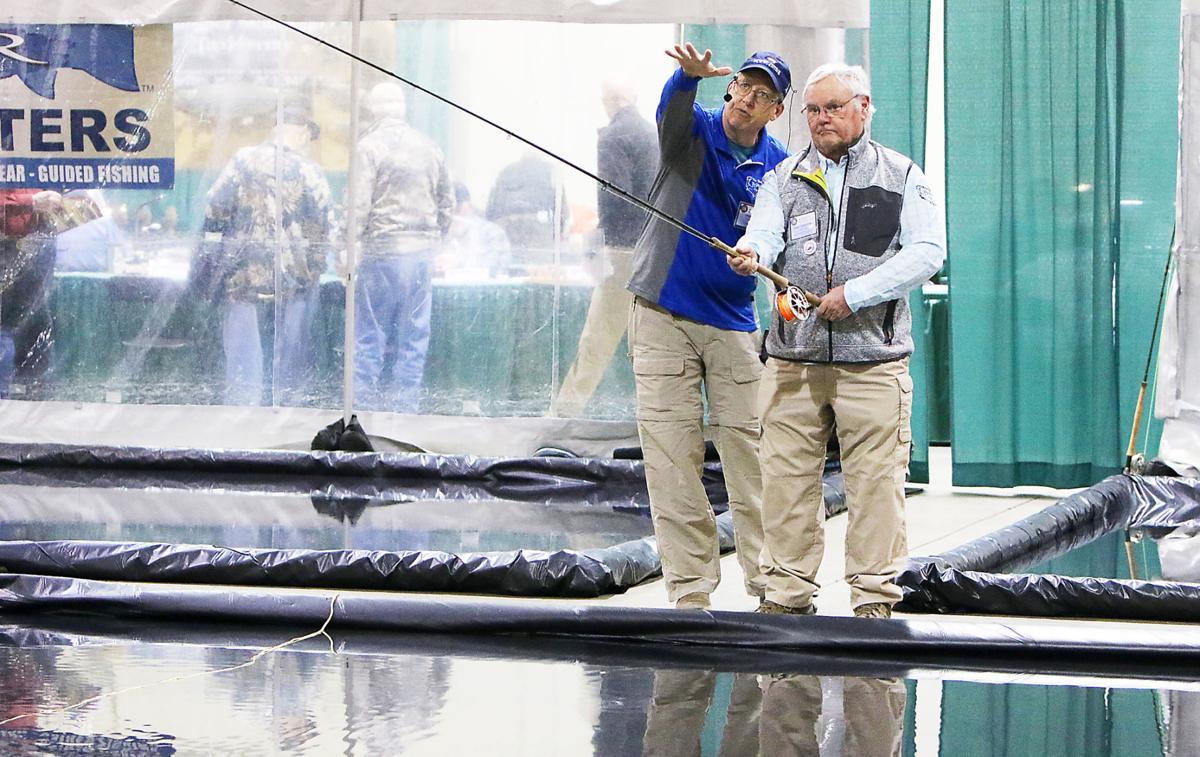 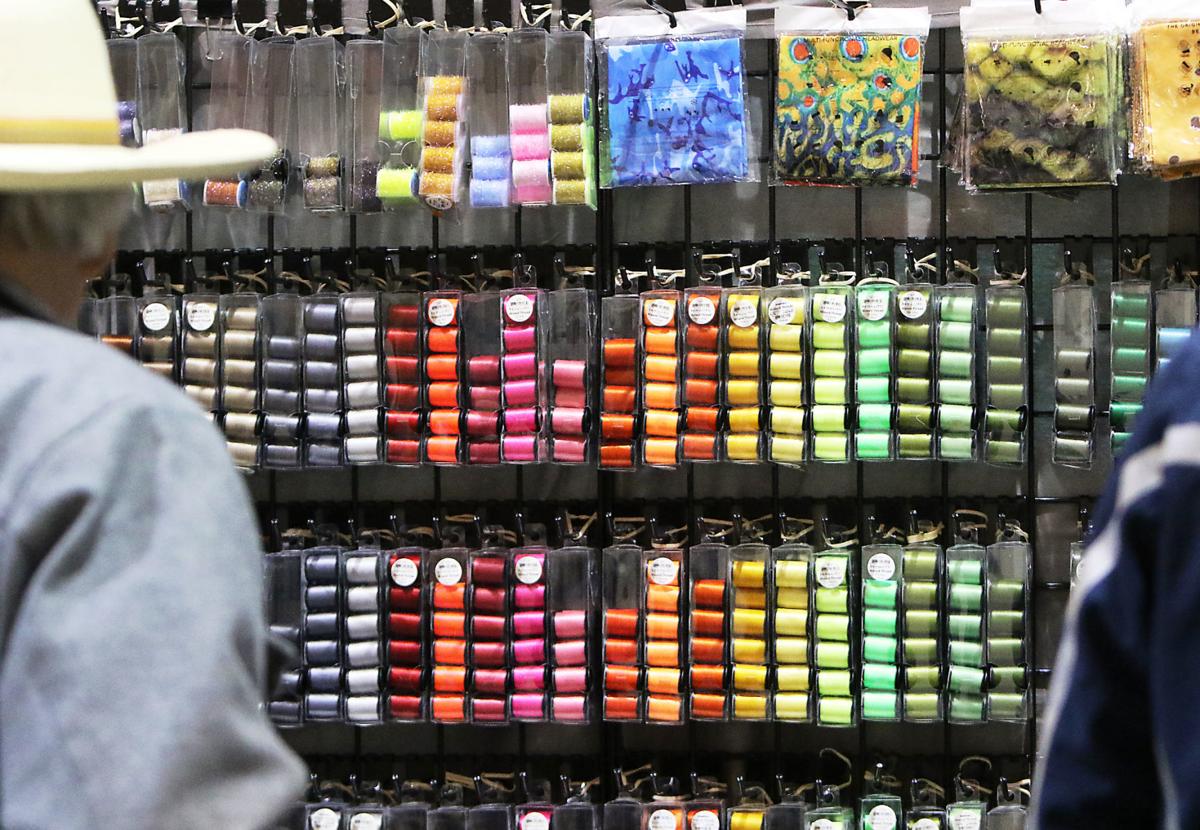 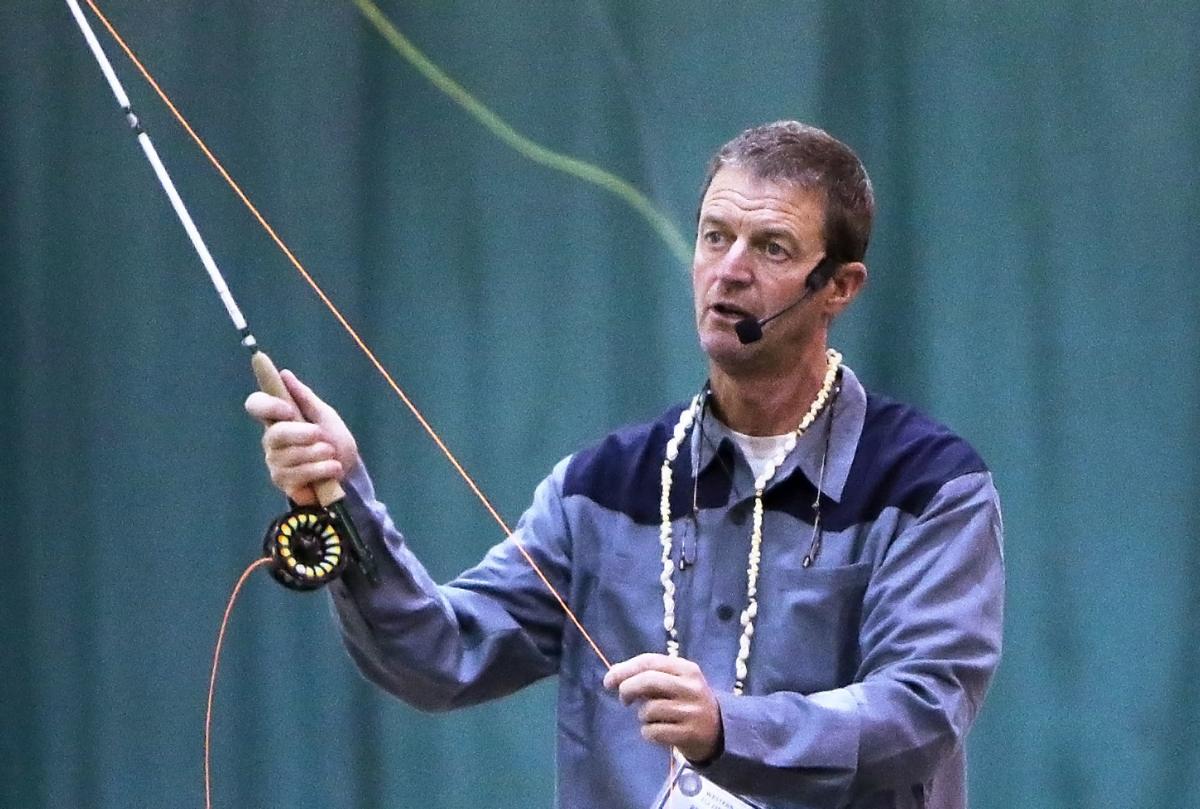 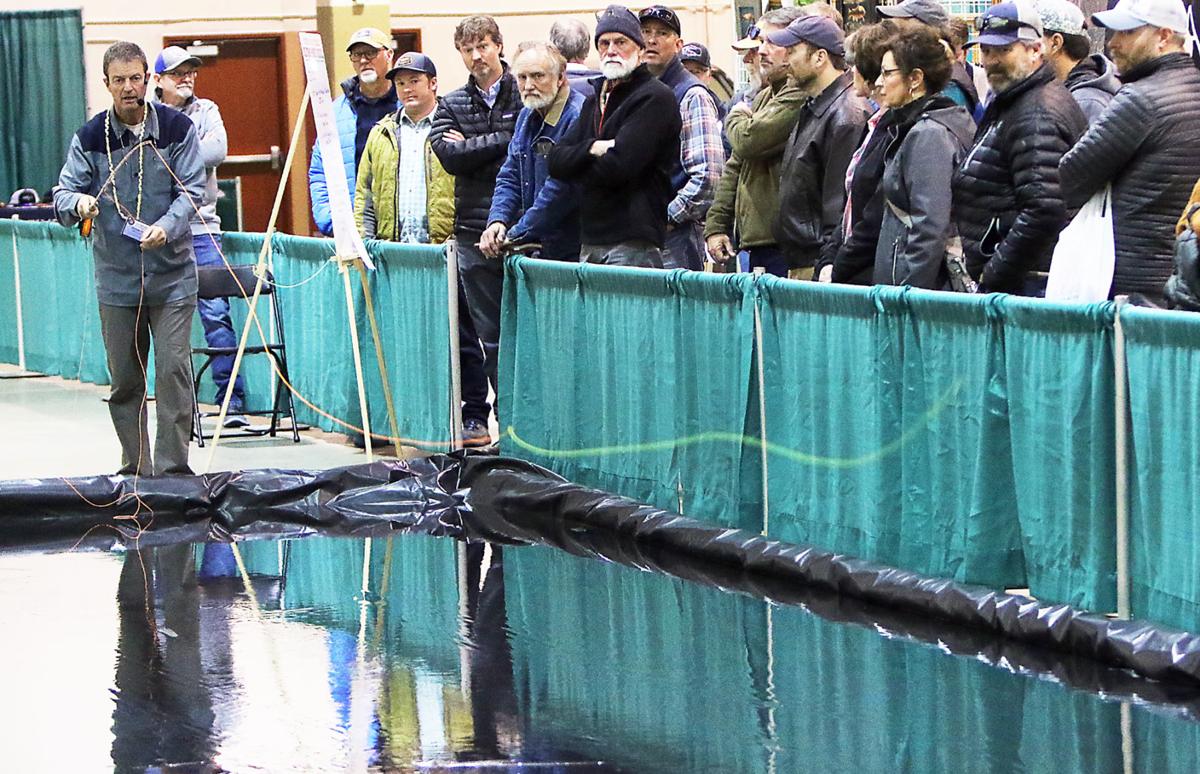 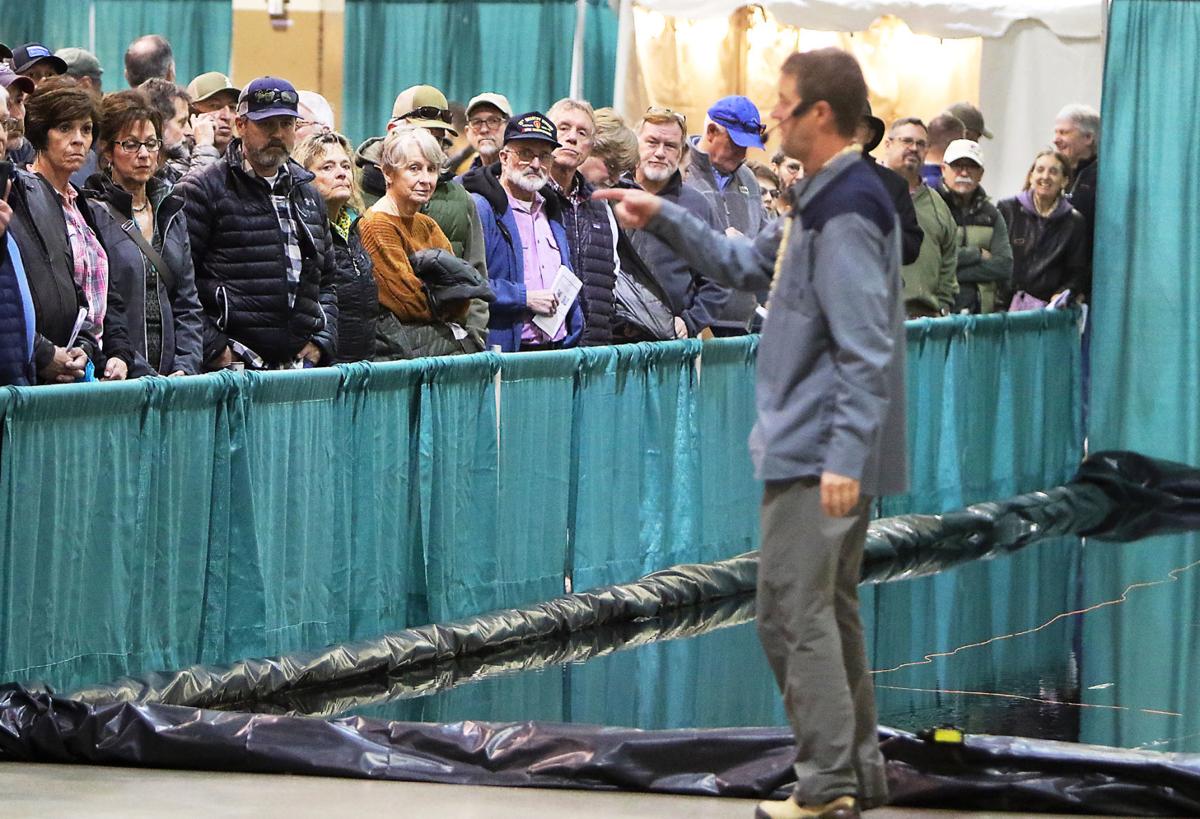 A crowd watches as Jeff Currier, with Global Fly Fishing, puts on a casting demonstration at the Western Idaho Fly Fishing Expo at Expo Idaho in Boise, Friday, Jan. 10, 2020. 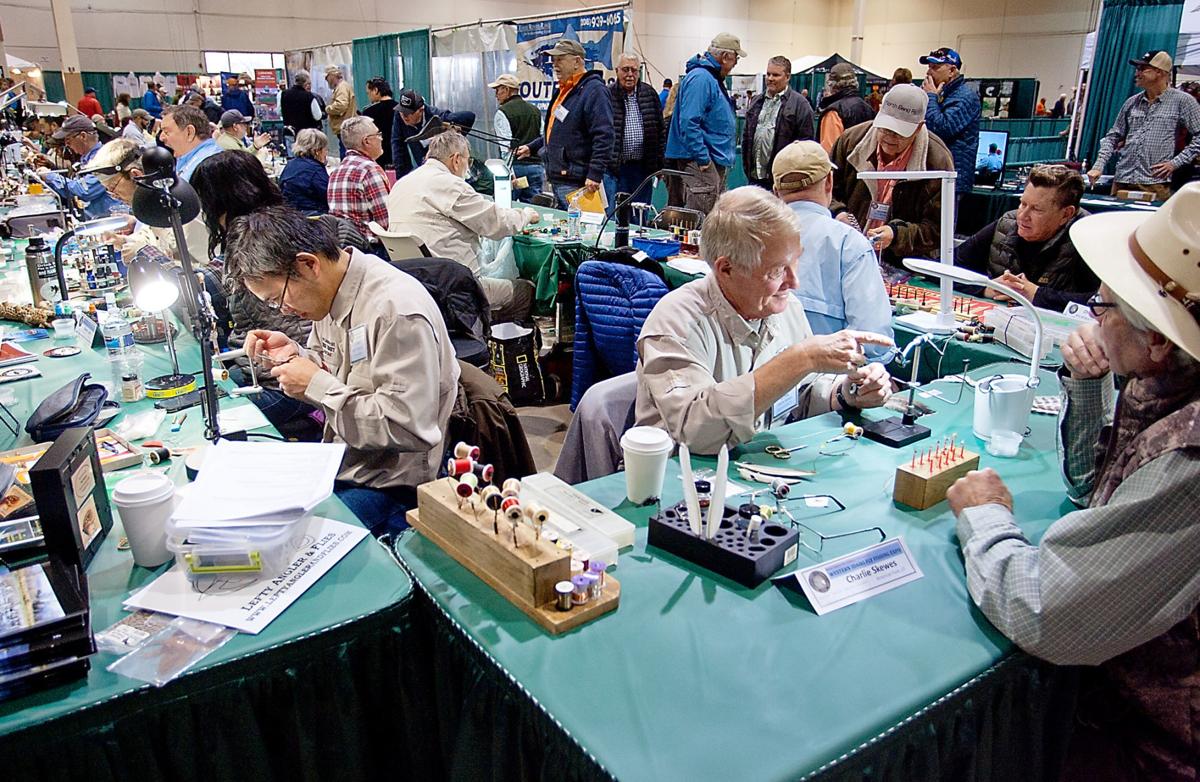 Fly tyers show off their skills during the Western Idaho Fly Fishing Expo at Expo Idaho in Boise, Friday, Jan. 10, 2020. 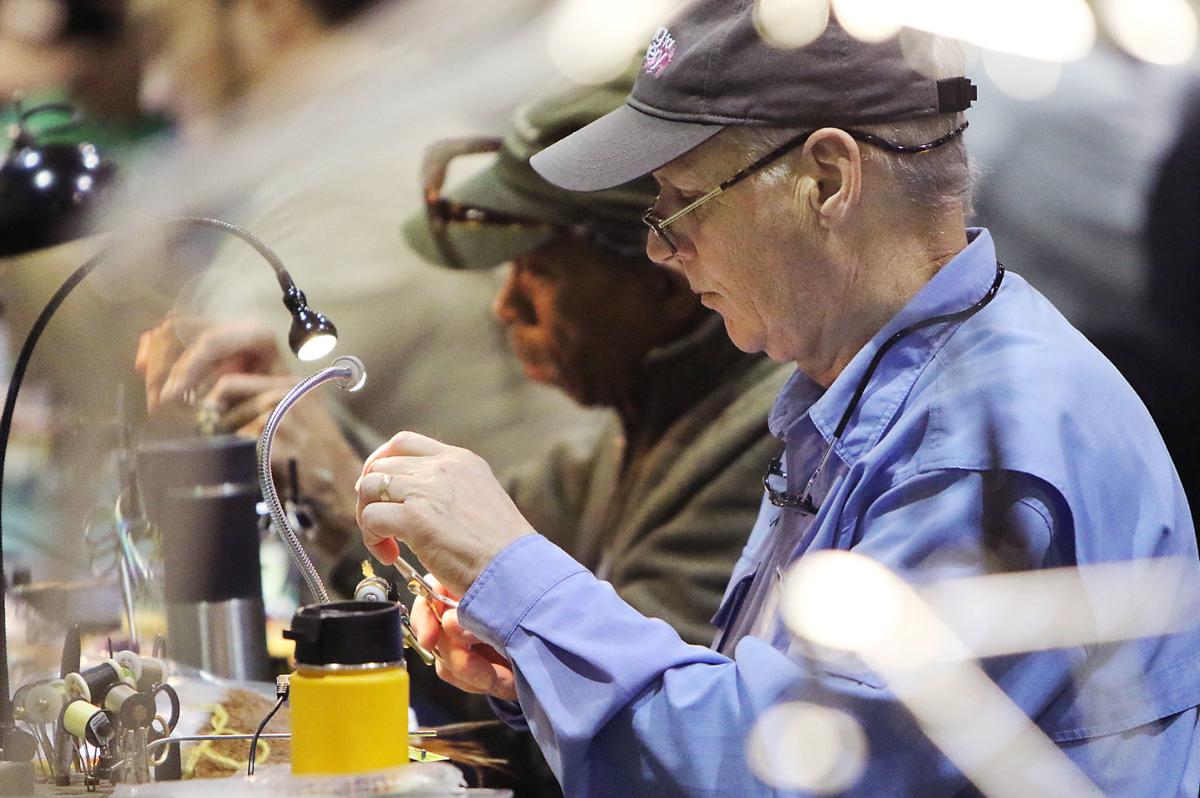 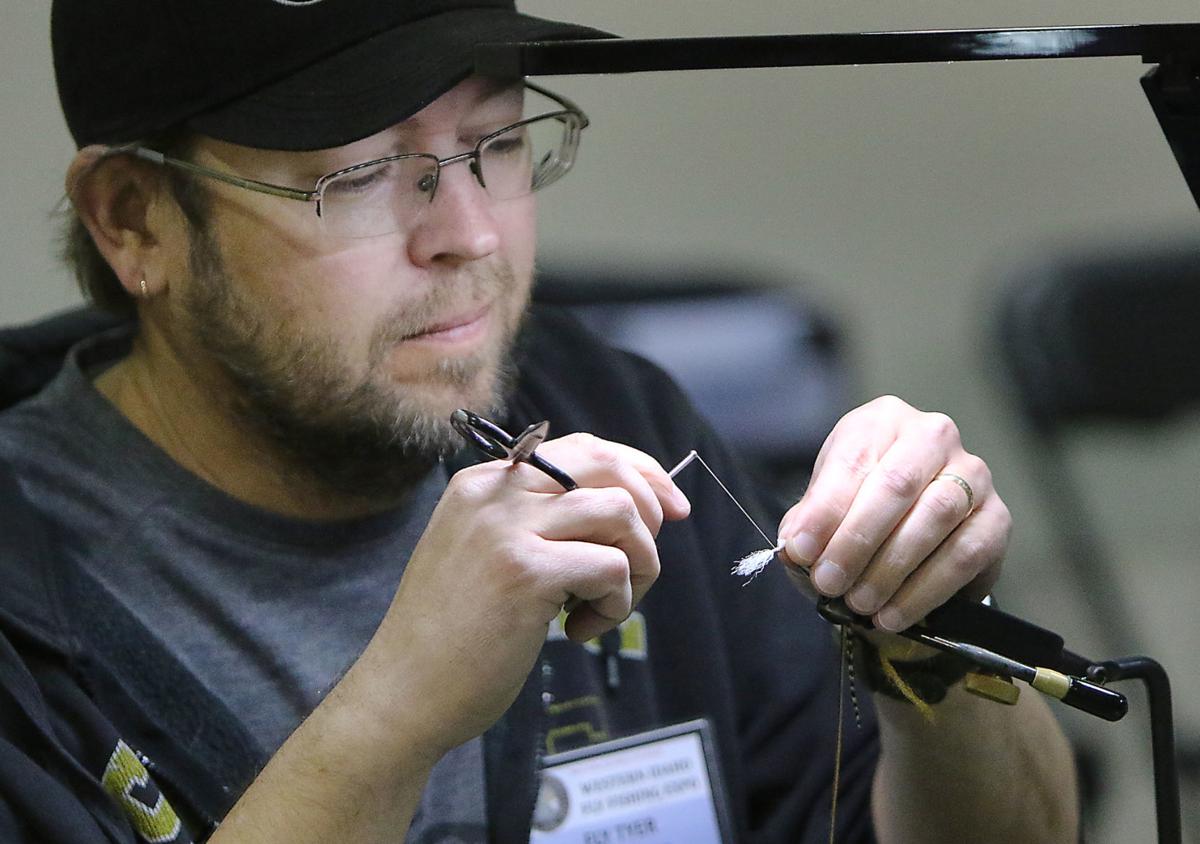 A selection of completed flies on display in front of a fly tyers booth during the Western Idaho Fly Fishing Expo at Expo Idaho in Boise, Friday.

A crowd watches as Jeff Currier, with Global Fly Fishing, puts on a casting demonstration at the Western Idaho Fly Fishing Expo at Expo Idaho in Boise, Friday, Jan. 10, 2020.

Fly tyers show off their skills during the Western Idaho Fly Fishing Expo at Expo Idaho in Boise, Friday, Jan. 10, 2020.

BOISE — The sizzle of a floating line zipping through the air and an expert caster’s explanation about why the technique works was a common sight Friday at the 16th Annual Western Idaho Fly Fishing Expo.

They go to learn from casting experts, professional guides, fly tying magicians and buggy entomologists, who cast lines over plastic-lined pools, gave talks and demonstrated their crafts at booths.

Fly fishing is a strange kind of outdoor recreation where the fisher has to cast a small, lightweight lure that imitates an insect, baitfish or small animals like mice and attempts to get a fish to eat it.

It’s fishing, but with the added steps of an odd and elegant cast — and a sometimes-maddening amount of gear, much of which was on display in the cavernous Expo Idaho building.

Tom Old, the president of the Boise Valley Fly Fishers, said the entire point of the expo was to fill the education vacuum for fly fishers.

“There’s a need for education for all these people,” Old said.

It’s also a place for networking, learning about that strange cast and confounding gear and sometimes even job opportunities, said Old.

“People get jobs out of this,” Old said as he strode through the crowds.

Old was particularly proud of the number of educational programs the Fly Fishing Expo was putting on this year, including casting clinics, insect-identification sessions (how to figure out what bug is what, essentially) and how to fish in saltwater.

Terry Turner, a fly fishing rod-maker from Gladstone, Oregon, said the Boise Expo is one of the three trade shows he makes a point of traveling to each year.

“I’ve been in the rod-building business for the past 20 years,” Turner said.

What started as a hobby became a small business after he retired from his manufacturing job and started creating unique fly fishing rods for people.

“I sell what I make, and everything I build is unique,” Turner said of his fiberglass and graphite rods.

Being at shows like this weekend’s Western Fly Fishing Expo gives Turner a chance to speak with people about his wares — as well as a chance to see the continually growing fly fishing community in action.

“Fly fishing is growing,” Turner said as he stood in front of his extra-tall, double-handed steelhead and salmon rods. “Women and younger people are getting into it.”

Guides and outfitters also make their way to the expo each year, including Joe Moore, the co-owner of Big Sky Anglers in West Yellowstone, Montana.

“We’re going to three shows this year in Michigan, Texas and Boise,” Moore said. “This is our one regional show.”

Selling the fly fishing experience is a key part of the show for Moore. His company has built a lodge in West Yellowstone in order to bring people in for the full experience of fishing and taking a vacation, without the roughing it.

“You have to get people thinking about it with photos,” Moore said, gesturing to his booth’s bright pictures of trout and the topography of West Yellowstone.

People closer to Boise are also involved in other hands-on aspects of the expo, like the fly-tying tables that showcase a number of beautifully made flies that come together before your very eyes.

Aileen Lane of MK Flies in Kuna has been tying flies for the past decade, and has been coming to the expo for the last few years.

“I had an ex-husband who wanted his wife to tie flies for him,” said Lane, but little did her husband then know that Lane would take fly-tying and make it her own.

“I do it for my own self,” Lane said, and with that sense of ownership comes a love for the action of tying and for the fly fishing community.

“I don’t have any family in Idaho,” Lane said, but she decided to make a home here because of her connection with the community that surrounds fly fishing.

“If it wasn’t for fly fishing, I have no idea what I’d be doing here,” she said with a laugh.