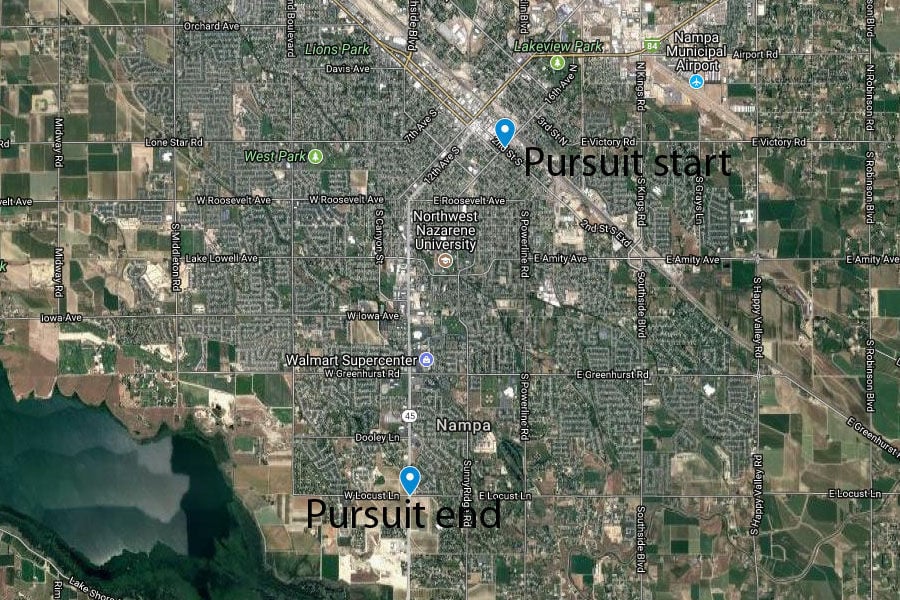 Nampa Police’s pursuit of suspect Joe A. Nevarez began just after 12 a.m. Tuesday, Feb. 13, 2018, in the 1600 block of Second Street South and ended near the intersection of Highway 45 and East Locust Lane. 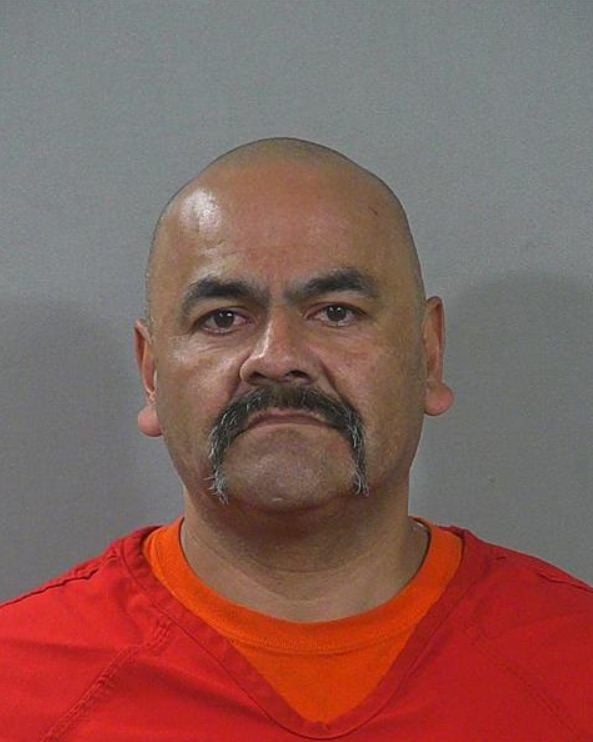 CALDWELL — A driver charged in the death of his passenger, who was hit and killed by a police vehicle during a pursuit, was sentenced to prison for at least three-and-a-half years, and possibly as many as five.

Judge Thomas Whitney sentenced Nevarez to the maximum penalty for misdemeanor vehicular manslaughter — one year in the county jail, with credit for time served. Having spent over a year in jail, he will be next taken into the custody of the Idaho Department of Correction for the other charges’ sentences.

Whitney sentenced Nevarez to the maximum five years in prison for felony eluding a police officer. He could get out on probation after serving 3.5 years of that time.

The maximum sentence for the felony eluding charge fit because it was “as tragic as an eluding case can be,” Whitney said.

Nevarez was also given five years of probation for possession of a controlled substance, which was methamphetamine the night of the pursuit. That probation will be served after the felony eluding charge.

The pursuit started just after midnight Feb. 13, 2018, when police tried to pull over Joe Nevarez in the 1600 block of Second Street South in Nampa. As officers were going to ask Nevarez to get out of the van, he sped away, according to police. The officers pursued.

During the pursuit, Nevarez’s passenger, 36-year-old Georgia Carrera, told Nevarez several times she wanted out of the vehicle, according to prosecutor Chris Berglund. When Nevarez turned onto 18th Avenue South, Carrera fell from the vehicle, and Nevarez continued fleeing officers.

Carrera came to rest in the road on 18th Avenue near Second Street South. An initial pursuing Nampa police officer turned onto 18th Avenue and, attempting to avoid items that had also been thrown from the van, did not see Carrera lying on the roadway, according to an affidavit; the officer ran her over, believing he hit debris, and continued pursuing Nevarez. Carrera died from her injuries at the scene.

Carrera was Nevarez’s friend, according to family who spoke during Nevarez’s sentencing. Carrera’s teenage daughter recalled how Nevarez told her he would take care of her mom. But that night in February, he failed to get her home safe.

“I trusted you to keep her out of trouble,” Carrera’s teenage daughter said during her victim impact statement.

Carrera was a mother of three. Her children, sister and mother reminded the court Monday of all the things she has missed — her daughter’s quinceañera — and will miss — like her oldest daughter’s high school graduation.

One of Carrera’s daughters knew the exact number of days — 538 — that her family has been without their mother.

It also represents how long the case has dragged on in the court system with many motions that have been made, including a request for Nevarez to complete a competency evaluation.

Nevarez has been in custody of the jail the entire time.

His inability to accept any responsibility for Carrera’s death, in addition to the lengthy case, has made the family relive her death over and over, Carrera’s mother testified in court Monday.

“Your choices led to her death whether you want to accept responsibility for it or not,” Carrera’s sister, Delfina Velasco, said in court Monday.

*Editor's note - This story has been updated to reflect the following correction: Joe Navarez was sentenced to prison for a fixed three-and-a-half years. Earlier versions of the story included an inaccurate minimum sentence.

NAMPA — Nampa Police Cpl. Bryce Martin had only about four hours of sleep when he showed up to assist at a routine traffic stop. It was a Tues…