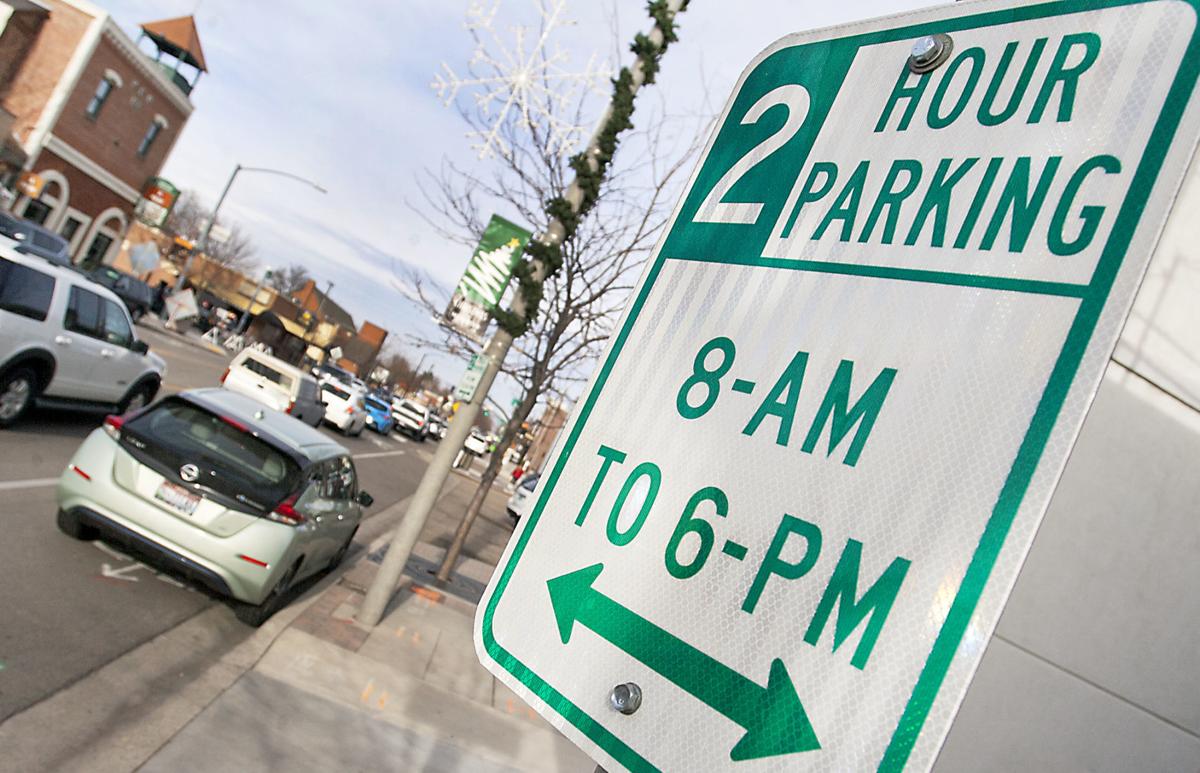 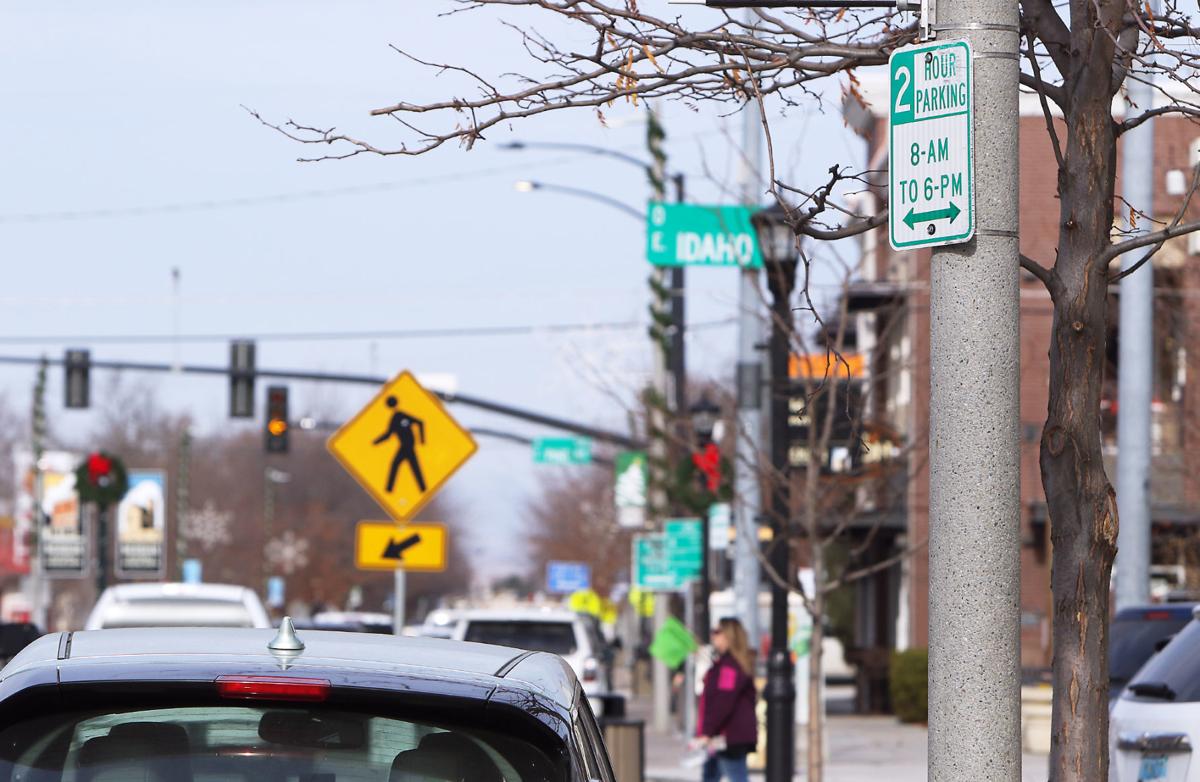 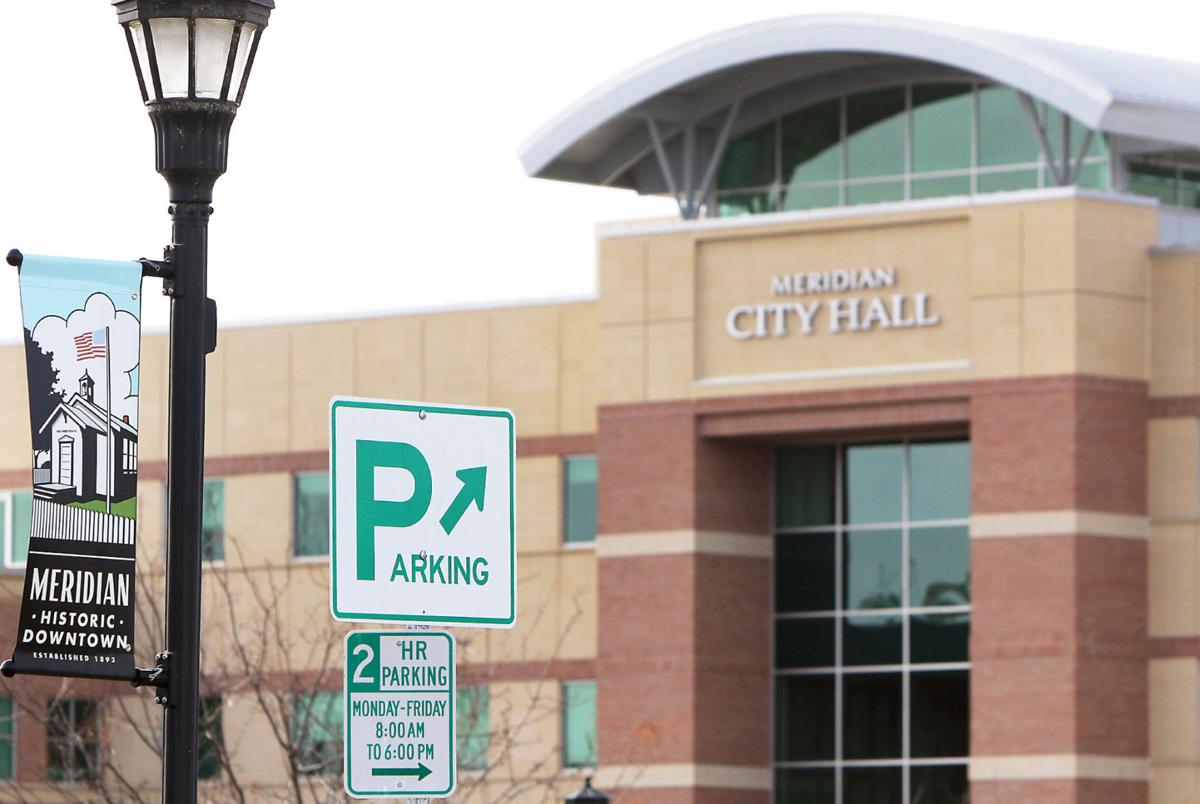 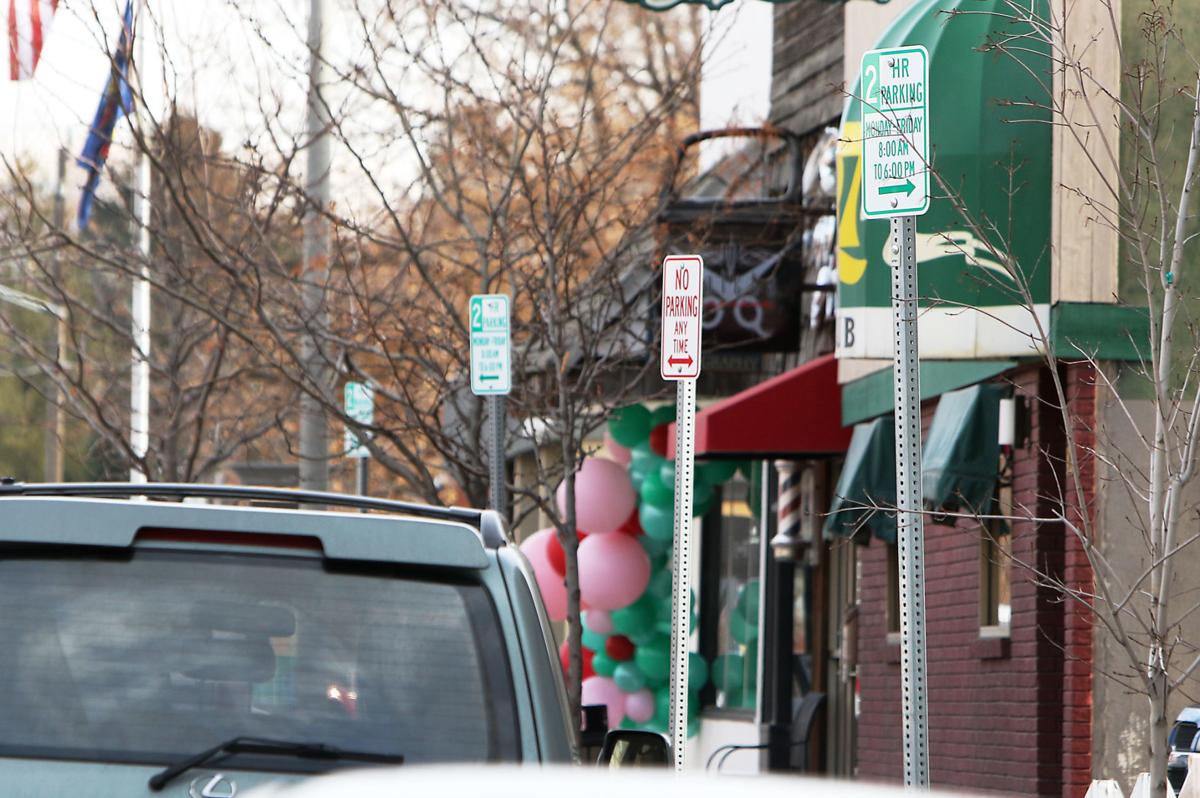 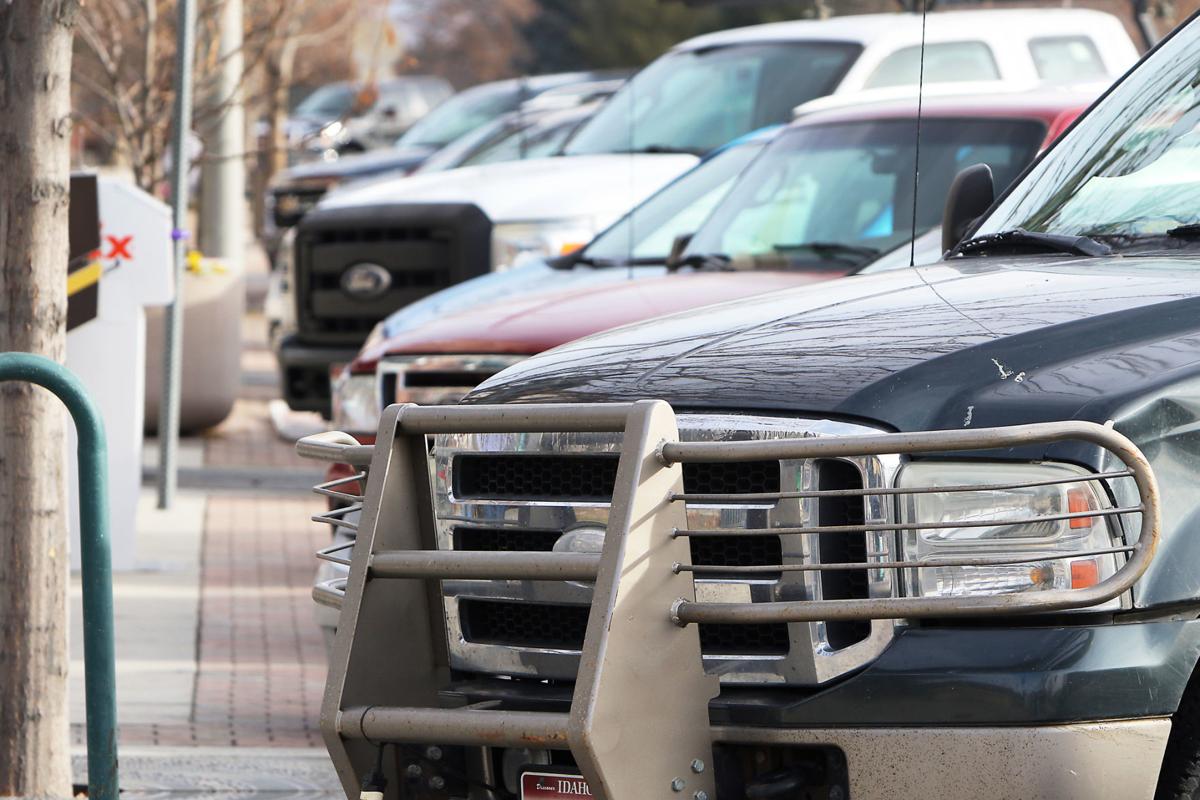 Cars and trucks are parked in a two-hour parking zone along East Idaho Avenue in downtown Meridian, Friday, Dec. 6, 2019.

Cars and trucks are parked in a two-hour parking zone along East Idaho Avenue in downtown Meridian, Friday, Dec. 6, 2019.

MERIDIAN — Some business owners downtown are fed up with the parking. Customers often can’t find accessible parking, and tensions among business owners over access to parking lots is on the rise, they say. And it may only get worse with more downtown development that’s on the horizon — apartments, offices, retail space, a convention center, a charter school and a new community center all could be built in Meridian’s quaint, historic downtown in the coming years.

Current downtown business owners say parking already brings them headaches, for various reasons: a private parking lot that isn’t so private; a neighboring office worker who repeatedly used a two-hour parking spot all day; a row of parking that’s out of commission while apartments are under construction.

Cruisin Biker Wear has been operating in downtown Meridian for eight years. Now Walker is considering relocating, in part because of parking frustrations.

Walker rents a parking lot — which is attached to the building’s lease — for her employees to park in behind the building.

The lot is the envy of the square block, which includes four bars. Other business owners “beg” Walker for access to a few spots “but we don’t have the space,” she said. Patrons of the surrounding bars regularly park in her lot and upon returning to their cars find a note asking them to park somewhere else, and on rare occasions, they get towed.

“It’s a problem for people that work downtown to find parking,” Walker said. That’s why it’s important to keep the spots available for her employees.

For customers, there are spots with two-hour time limits in front of the store and down Broadway. When parking is in short supply, customers either come back another day or forget the shopping plans altogether, Walker said.

“I know we’ve lost business before,” she said.

Several new developments are in the works downtown, either under construction or in the planning stages.

Keller Associates are in conversations with the city of Meridian about building a three-story, 18,000-square-foot office building downtown on the northeast corner of Main and East Bower streets, the Meridian Press previously reported.

In October, the Meridian City Council agreed to work with the Galena Opportunity Fund, a Boise-based developer, on a proposal for a $13 million urban renewal project on Northeast Second and East Third streets, just south of East Idaho Avenue, which would redevelop the city’s community center. Galena is proposing to build a new community center and a public auditorium, along with mixed-use space. The developer is also proposing to include space for a charter school above the community center.

A second Galena development downtown could include a 168-stall parking structure, which could be utilized by community center patrons.

Meridian city officials did not know how many parking spots currently are located downtown.

“As more businesses eye downtown, we are working with them to incorporate parking solutions into their projects, such as building parking lots or parking structures, so we have more options other than street parking,” Squyres said in an email.

“I do know that people are concerned about how parking will be impacted by the growth,” she said. “But from everything that I’ve seen, with the plans for the projects that are coming in, I think that everyone’s handling it really responsibly.”

Certain types of businesses rely on accessible parking more than others, Bowshier said.

“Certainly (it’s) more so our retail and restaurant businesses that rely on there being parking for patrons,” she said. “Whereas, for the offices, it’s just making sure the employees have a place to park to get to work. And hopefully, they’re parking in a place that is responsible — and not in those two-hour spots all day.”

Greg Walker, president of Modern Printers, a downtown print shop, said he had an “altercation” with a nearby office worker who took advantage of the two-hour customer parking — all day.

“My big issue is focusing on out here,” said Greg Walker, pointing out his shop’s window at the few street parking spots, which are meant for Main Street business patrons. “The key is the city making sure they enforce the (parking) ordinance. They have to do it. If they don’t do that, everything falls apart.”

City code enforcement officers use chalk to document the position of vehicles in time-restricted parking spaces and check back on them after two hours, according to Code Enforcement Supervisor Rich Everett.

Parking in excess of the posted time limit is the most common citation for officers conducting downtown parking enforcement, Everett said in an email.

Shandy Lam, spokeswoman for the city of Meridian, said downtown parking is a top priority for code enforcement officers.

“They are patrolling and really enforcing those two-hour spots,” Lam said. “Some businesses love it, others are concerned that their current customers are getting tickets.”

Walker said parking enforcement officers have shown a good presence downtown lately. But he’s worried about what’s coming downtown in the near future.

Across the street from Modern Printers, construction has started on the Old Town Lofts — two four-story buildings on the old Meridian City Hall site — which were approved by the Meridian City Council as an urban renewal project. Both buildings will have commercial space on the first floor and residential units on the top three. Combined, the two buildings will have 103 residential apartments and a little less than 16,000 square feet of retail/office space.

The plan includes 103 parking stalls between the two buildings. The two developers, the Pacific Companies and Meridian businessman Josh Evarts, also plan to reprogram some of the parking on Idaho Avenue to increase street parking, the Meridian Press previously reported. Squyres, administrator of the Meridian Development Corporation, said her organization, along with the city, worked with the Old Town Lofts developers to use street parking “to offset some of their determined parking needs.”

A competing urban renewal project from deChase Miksis development was also proposed for the corner of North Meridian Road and East Broadway Avenue, where the old City Hall and the First Interstate Bank are. The proposal included 111 residential units, 282 parking spaces — including 75 for the public — 29,400 square feet of office space and 8,500 square feet of retail space.

Of the two projects proposed for the old City Hall site, the city council chose the Old Town Lofts proposal, which has one parking spot per apartment unit.

“I really don’t know what the impact will be,” Greg Walker said of the lofts.

Another local business is already feeling the impact. Boomer Godsill, owner of The Original Sunrise Cafe on Main Street and East Idaho Avenue, said the lofts’ builders erected a fence along Idaho Avenue that blocks about 20 parking spots for the duration of construction. The spots are across the street from Sunrise Cafe and have been popular among its patrons, many of whom are elderly and already have trouble finding handicap spots, Godsill said.

“I have definitely seen my sales drop off the last two weeks since they closed off that sidewalk with all those parking spots,” he said. “That’s virtually the closest parking we have other than a little, four-car parking lot that we have in the back.”

Godsill said the plans for parking at the Old Town Lofts is “ridiculous.”

“Ninety-nine percent of families here in Idaho have two vehicles,” he said. “There’s not enough stuff in downtown Meridian to sustain your life where you could just walk around. You’re going to have to drive outside Meridian, no matter what, if you live downtown.”

Godsill lately has disputed with a nearby church over parking — Sunday is the busiest day for his business as well as the church. Those types of disputes will increase in the coming years if the city doesn’t invest in parking infrastructure, Godsill said.

“They need to get together and figure out what their actual plan for downtown is, figure out: if they’re actually planning on growing the downtown, if they want to keep it the way it is — kind of an old, little, nostalgic place — or what,” Godsill said. “If they want the old, nostalgic place, don’t let these apartment buildings come in and basically ruin the vibe. If they plan on making it an actual ‘downtown’ downtown, then focus on infrastructure first.”

Lam, spokeswoman for the city, said the city does not have plans to add parking downtown, but instead expects private developers will build parking infrastructure.