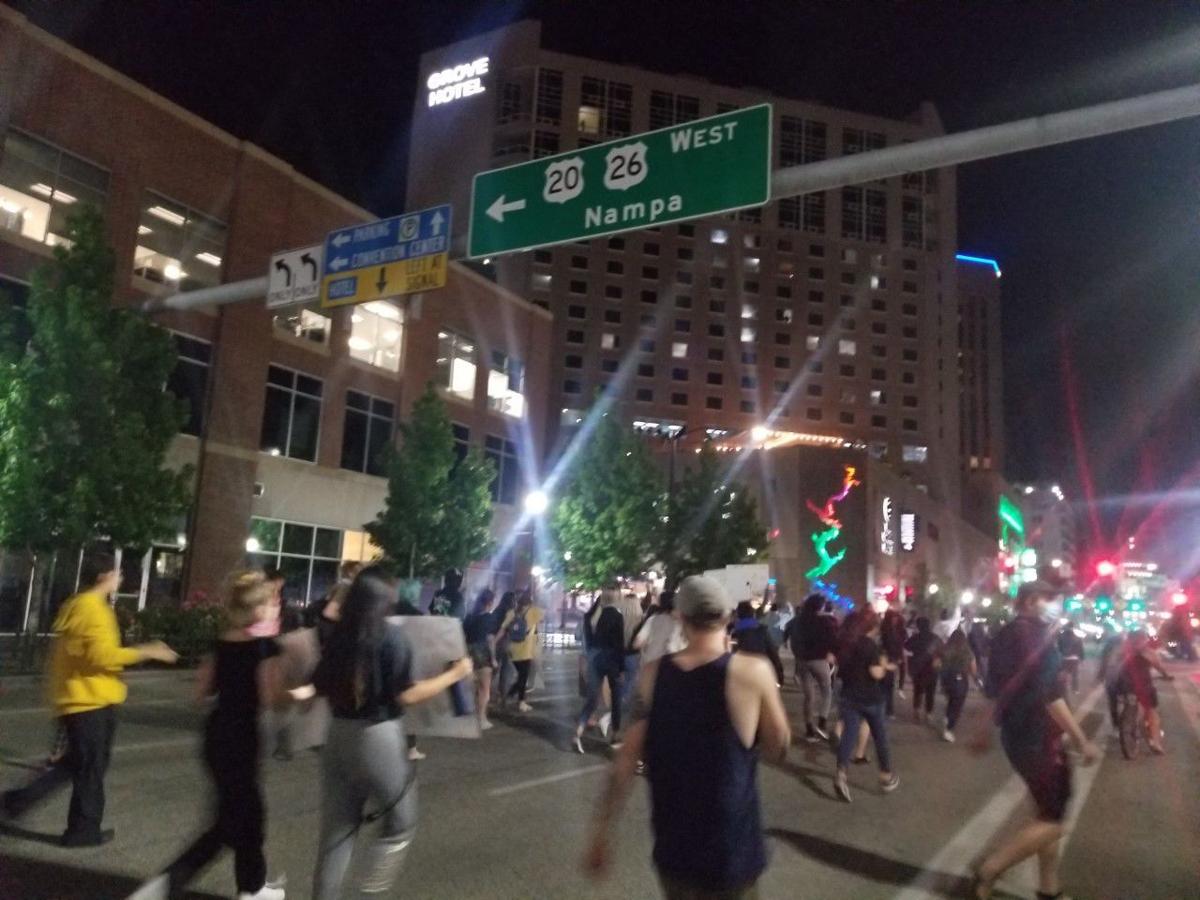 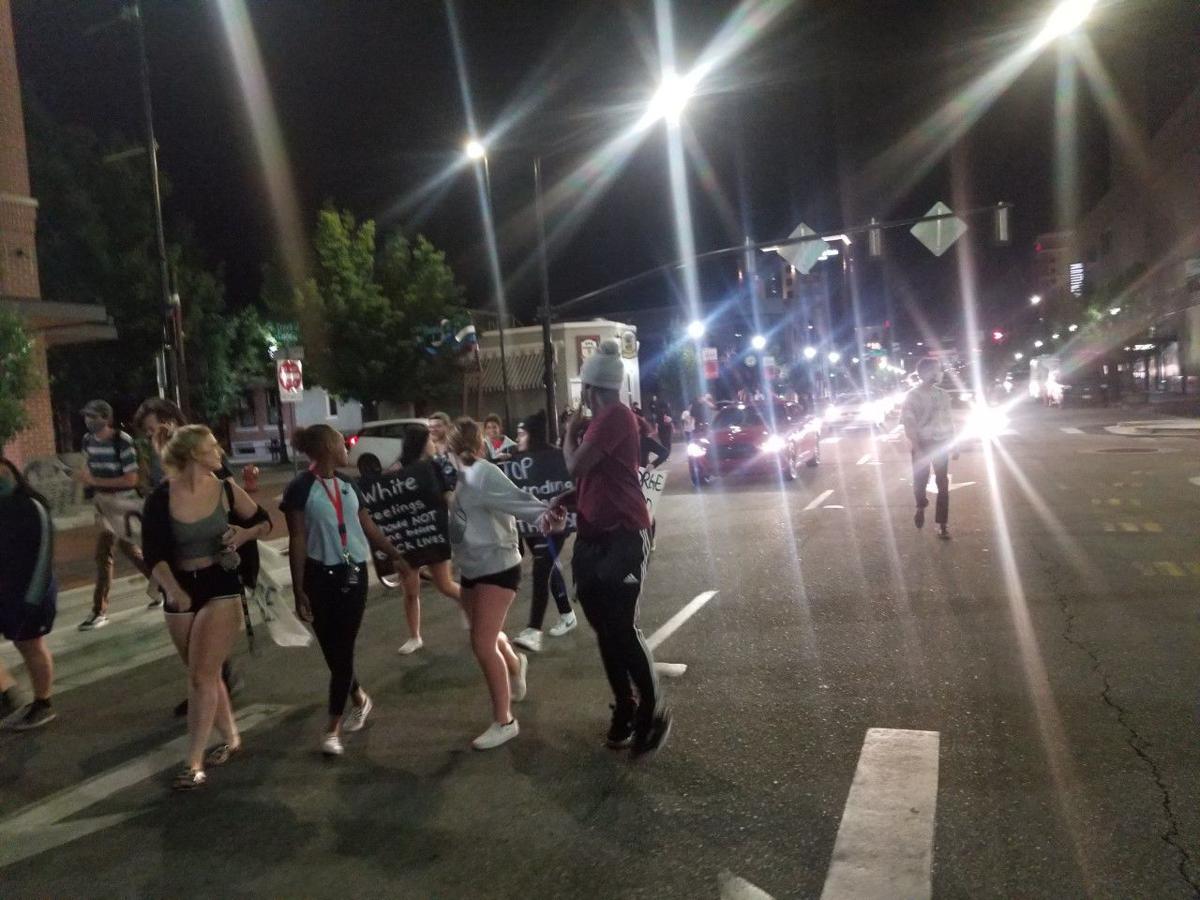 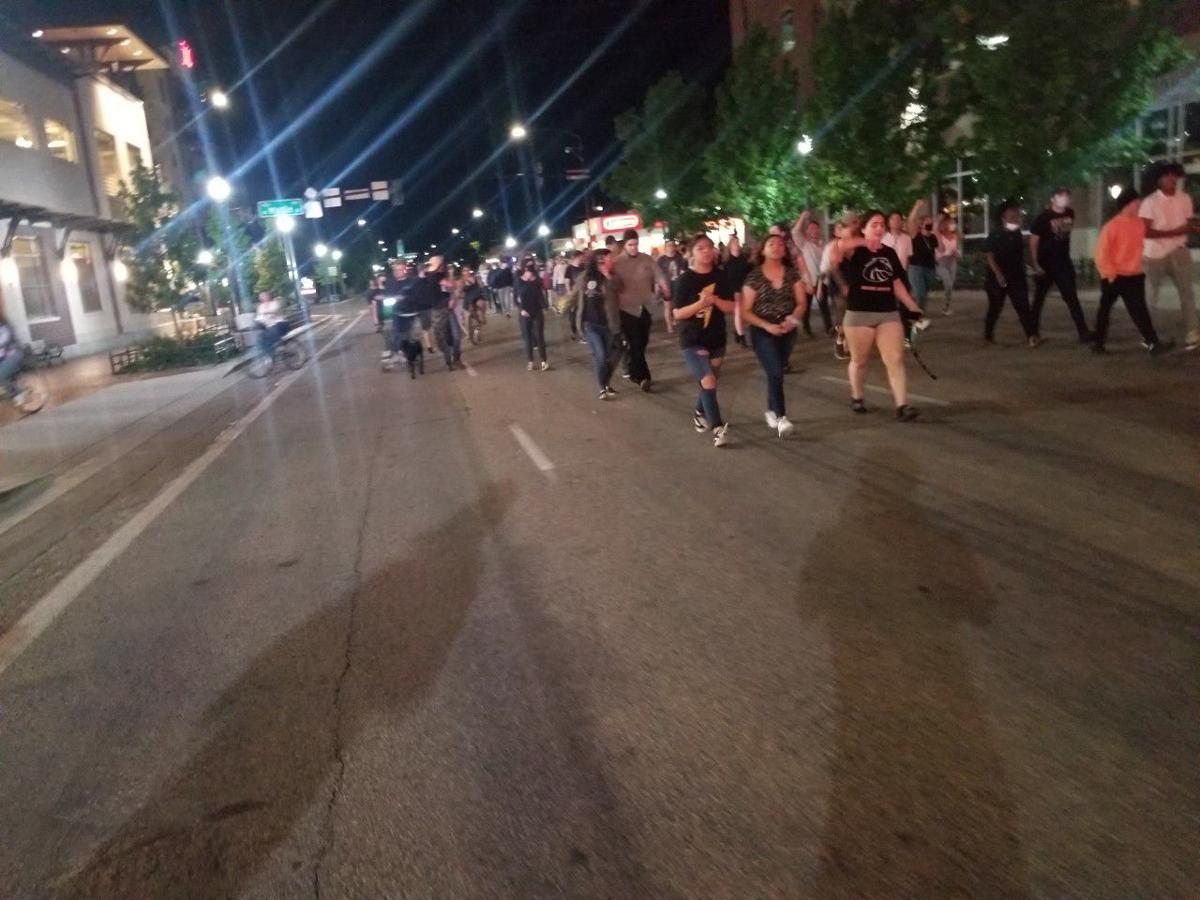 Protesters march up a street in downtown Boise Monday night, in response to George Floyd's death.

Protesters march up a street in downtown Boise Monday night, in response to George Floyd's death.

BOISE — Protesters gathered in downtown Boise Monday night and early Tuesday morning in a pitched rally to protest the death of George Floyd, who died after a Minneapolis police officer knelt on his neck for almost nine minutes on Memorial Day.

The Boise Police Department confirmed in a tweet it was investigating a shot fired in the area of the rally earlier in the night, but also confirmed there were no injuries, and one person was in police custody. The demonstration itself remained peaceful, if, at times, infuriated.

The rally was ongoing by then, with a large crowd chanting Floyd’s name. Floyd’s death was filmed by witnesses, and the footage shows Floyd telling the officer he can’t breathe. Three other officers appear to do nothing to stop the officer from kneeling on his neck. Although all four officers were fired, the incident sparked outrage and protests across the country — many of which have turned into violent riots.

That didn’t happen in Boise on Monday night. Police officers maintained a presence at the Idaho Capitol, but they didn’t appear to interfere with the protest. Protesters chanted George Floyd’s name and “black lives matter” before they began a march through the streets of downtown Boise, continuing to chant as they did. They marched largely the same route through Boise’s downtown streets three times, each time ending with one final walk up Capitol Boulevard to the Statehouse. Many people marched in the street, slowing traffic as they chanted over the occasional honk from drivers.

They returned to the Capitol steps at roughly 11:30 p.m., where they chanted into the early hours of Tuesday morning, sometimes, it appeared, in competition with a smaller group of demonstrators — perhaps 20 or 30 people — who held aloft American flags and a sign promoting Donald Trump for president in the upcoming election. That group of protesters moved farther and farther up the Capitol steps, until they stood at the top. Occasionally, they would chant Trump’s name, or “all lives matter,” in response.

While there was anti-police sentiment — one of the routine chants the crowd used referred to “all cops” as an expletive — the chants the crowd used focused more on Floyd, "black lives matter," and frustration with the Trump presidency. When it seemed possible tensions might flare into physical violence, many in the crowd would chant “keep the peace.”

A candlelight vigil is scheduled for Tuesday night at the Capitol “to mourn the lives of Black Americans lost at the hands of police and fellow citizens,” according to a Facebook post from its organizers.

The event is, according to the post, “a vigil, it IS NOT a protest, riot or rally. We will not be moving or mobilizing from the capitol steps area at any point."