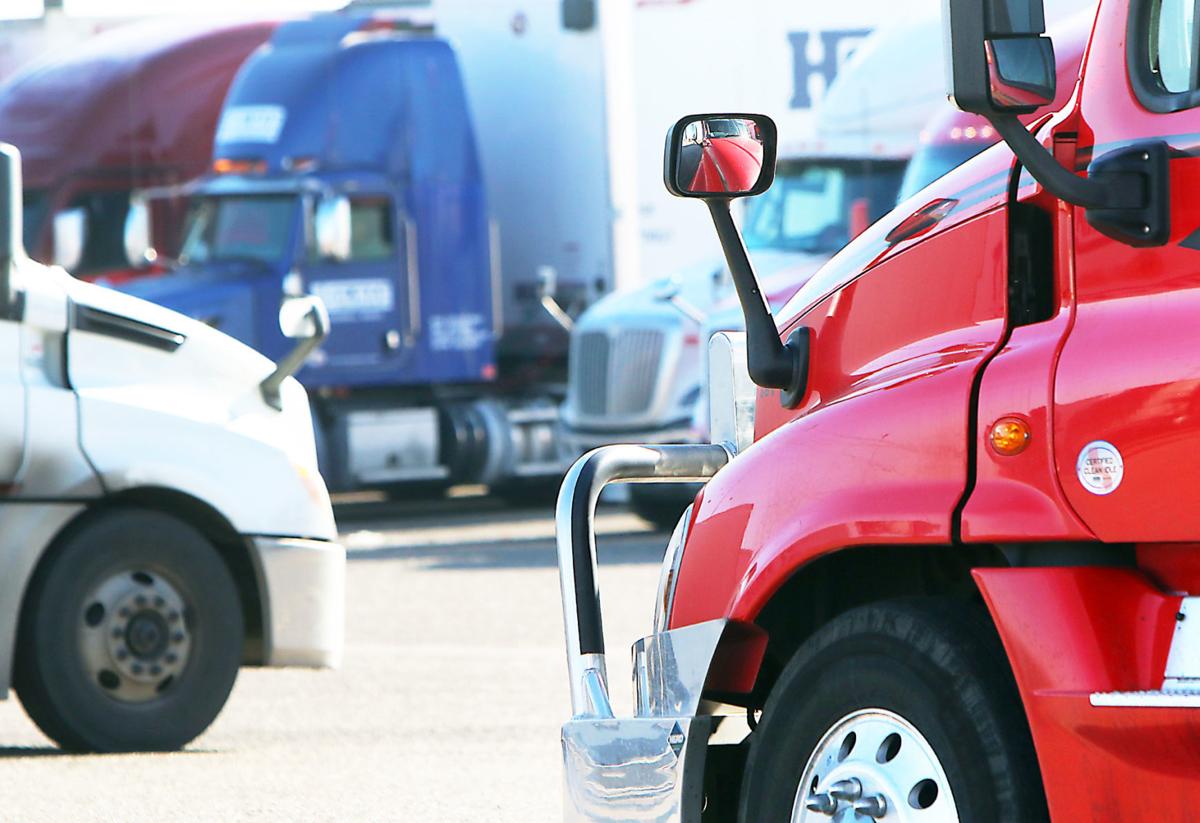 Commercial trucks from various parts of the country are parked at the Flying J truck stop in Caldwell Nov. 12. 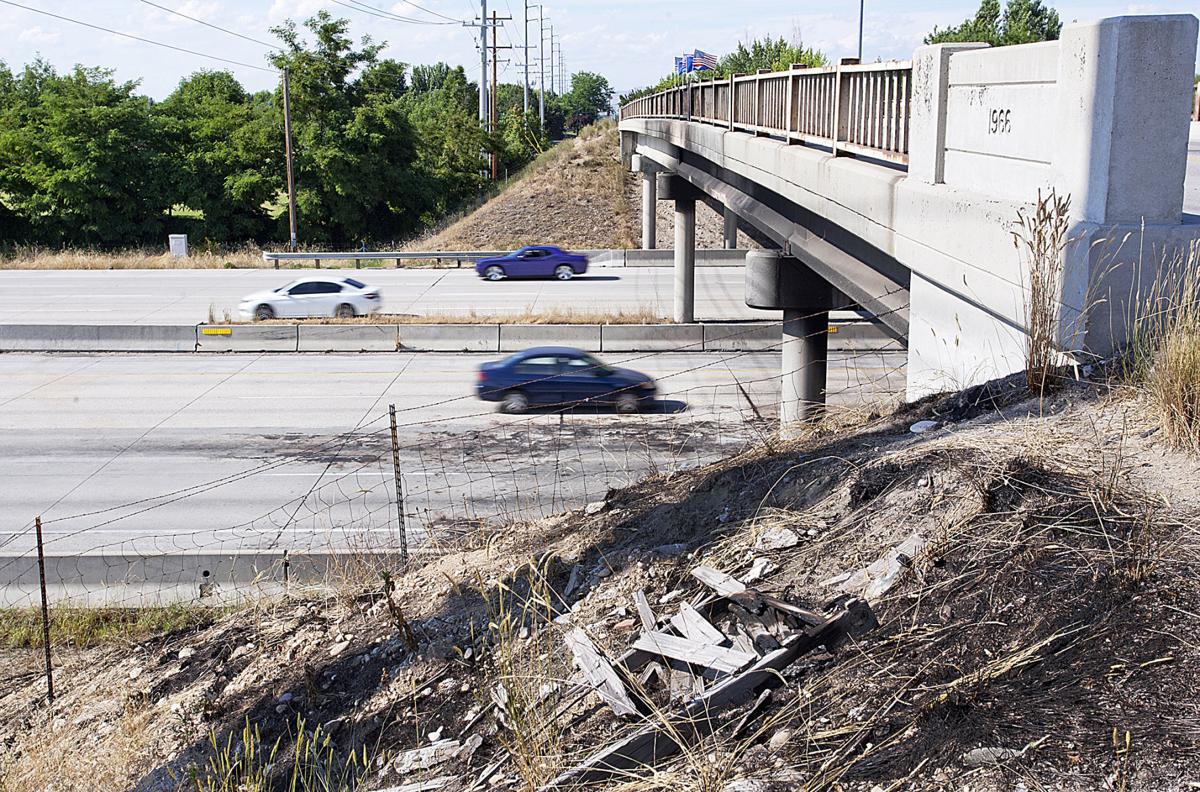 Interstate 84 traffic passes under the Cloverdale overpass on June 22. Damage from a June 16 crash that left four people dead can still be seen on the roadway, the overpass and the nearby embankment. Crews are taking steps to replace the bridge, which will lead to overnight closures on the interstate March 4-8. 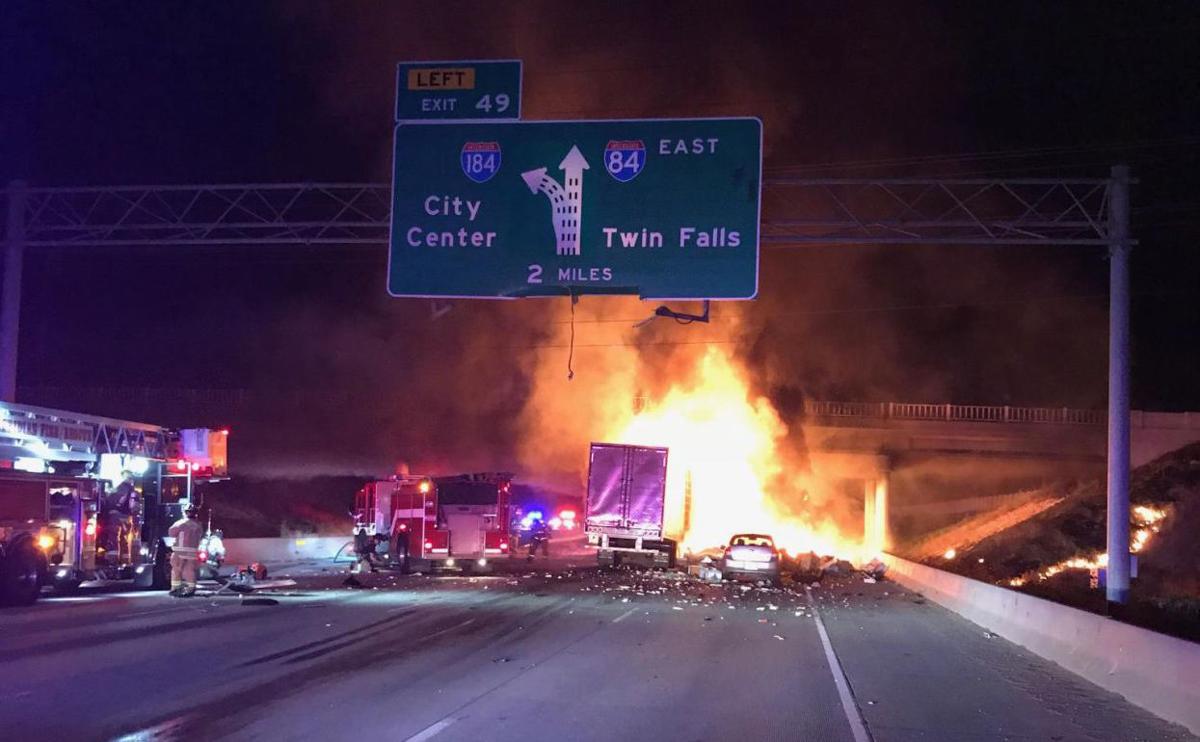 Idaho State Police investigated a seven-vehicle crash on Interstate 84 in at the Cloverdale overpass that killed four people on June 16. 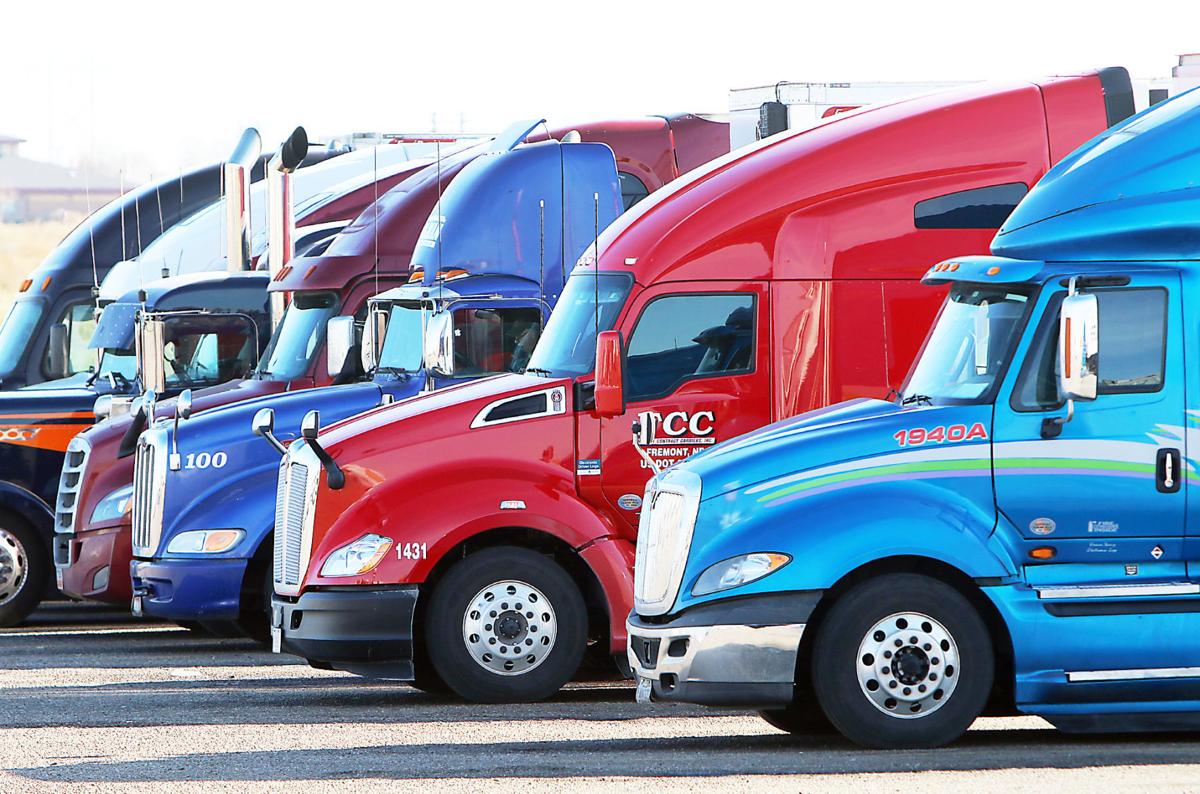 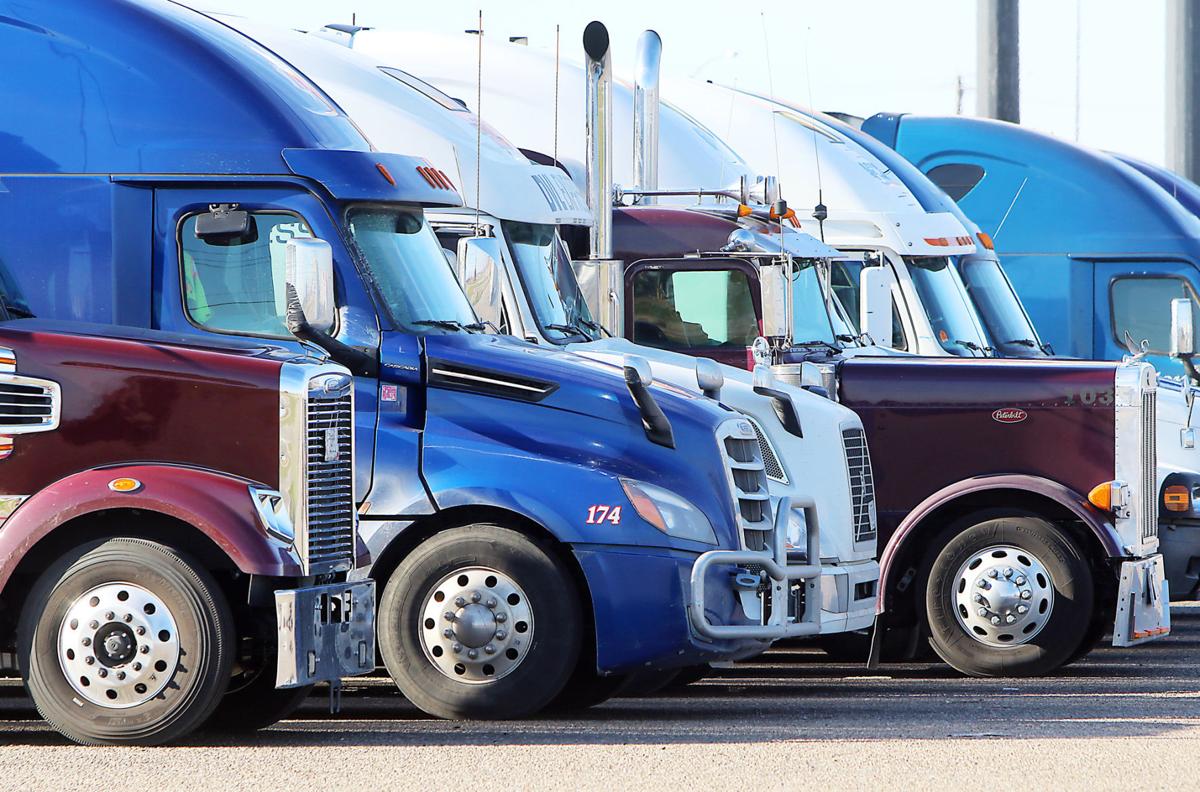 Commercial trucks from various parts of the country are parked at the Flying J truck stop in Caldwell Nov. 12.

Interstate 84 traffic passes under the Cloverdale overpass on June 22. Damage from a June 16 crash that left four people dead can still be seen on the roadway, the overpass and the nearby embankment. Crews are taking steps to replace the bridge, which will lead to overnight closures on the interstate March 4-8.

Idaho State Police investigated a seven-vehicle crash on Interstate 84 in at the Cloverdale overpass that killed four people on June 16.

Crashes involving large trucks and buses nearly doubled from 2013 to 2017, from 1,681 to 2,468, according to the Idaho Transportation Department. An increased number of crashes also means more fatalities, as the number of deaths from commercial vehicle crashes has jumped from 33 to 42 during that same time span.

Not included in that data set is the most noteworthy such wreck in the Treasure Valley, which is still evidenced by construction on Interstate 84 to replace the Cloverdale overpass. Official reports pointed to “inattention” on the part of a commercial truck driver as the cause of the fiery crash that killed four people in June.

Driver fatigue is a chief concern for regulators, but the rules governing commercial drivers have long been a political football, tightening and easing depending on who’s in office. While hours-of-service regulations were placed in good faith, some of the rules are inefficient for drivers in hand with other extensive driving codes, said Thayne Boren, vice president of payments for Boise-based company Truckstop.com.

Reductions in mandated rest times also mean booms in revenue. The Federal Motor Carrier Safety Administration is charged with administering commercial safety rules for the Department of Transportation. They estimate that every half-hour on the road taken away from drivers costs the industry $90 million. Proponents of lessening rest requirements point to that figure, along with digital advancements to the industry, as reasons to loosen the rules. Considering nearly 70 percent of all goods are transported by truck, said Boren, the impact of adjusted hours-of-service regulations would be significant.

“Anything that hinders freight movement,” he said, “hinders the economy.”

RULES OF THE ROAD

Hours-of-service regulations were established under the U.S. Department of Transportation to prevent accidents caused by driver fatigue — such as the accident in July when two Boise men were killed in a crash on a state highway outside Las Vegas after a commercial truck driver fell asleep at the wheel.

An alphabet soup of agencies and regulations overlooks commercial trucking and tracking all the rules can be difficult. Specific rest requirements, stipulate, for example, that someone hauling housewares is capped at 11 hours, while someone busing passengers is capped at 10. Drivers with a seat that reclines for rest — a sleeper berth, in industry terms — have different rules still.

“The half-hour break rule is fairly arduous and cumbersome to the industry...” said Boren. “Bottom line is that hours of service are not just hours that drivers have to abide by. There are well over 700 pages worth of legal language that creates ambiguity around the rules, when, where and how they apply and to whom might qualify for exemptions.”

The Federal Motor Carrier Safety Administration posted an online document ahead of the proposed rule changes that was open for comment on current regulations. One truck driver with nearly four decades of experience noted that hours-of-service requirements are too strict as it is.

“I understand the hours of service rules, but shouldn’t it be my choice when to work as long as I can prove that I’ve had sufficient rest to operate the truck in a safe and effective manner,” the driver wrote on the document. “If you listen to the drivers they will tell you the proper amount of rest varies from day to day and from person to person.”

Hours-of-service regulations are not only in place to protect the driver and general public, said Boren, but also the shipment of goods that the driver is carrying. Solutions could include paying drivers flat rates or working with shippers and receivers to improve efficiency on their ends.

Though no official rule changes have been introduced yet, many in the field expect them soon. Changes are largely influenced by the advent of electronic monitoring of vehicles.

In August, regulators released an advanced notice of proposed rule changes. The advanced notice document also opened the issue for public comment — over 5,000 were submitted.

Many of the comments were from truck drivers in support of the changes for longer driving periods and more flexible split rest times. Some noted that they get enough rest during loading and unloading or fueling periods. Others cited longtime industry experience as merit for choosing when they need rest and when they don’t.

Later in August, the Federal Motor Carrier Safety Administration proposed more revisions, which would all lengthen time on the road at the trucker’s discretion.

The official publication of the rule reforms could have come as early as March, based on the safety administration’s vague timeline, but the government shutdown has hindered the paperwork process, with large sections of the transportation department inactive and more than 20,000 staff on furlough.

Petitions for the hours of service changes came from both the Owner-Operator Independent Drivers Association and TruckerNation.org in February and May of 2018, followed by 30 U.S. senators signing a letter in support of greater hour flexibility asking for a “commonsense framework for drivers.” Neither U.S. Sens. Jim Risch nor Mike Crapo of Idaho signed the letter.

The drivers association called for the “elimination of arbitrary 30-minute rest break” and longer driving periods with more flexible rest breaks. Other calls for change include changes to sleeper berth options and updating rules surrounding driving in adverse conditions.

“ITA and its members believe in promoting highway safety — and compliance with the current hours of service has been shown to reduce crashes and improve safety,” Smyser said. “That said, if research shows changes to the hours of service rules can be made to increase flexibility while maintaining or improving safety, then we will support those changes.”

The largest percentage of fatal commercial vehicle crashes in 2017 in Idaho — 45 percent — took place on U.S. and state highways, according to ITD data, depicting the increased stakes of driving large vehicles amid passenger cars.

“Any changes related to hours of service regulations should be done with a sound, scientific approach,” said Matthew Conde, spokesman for AAA Idaho. “The stress should always be on sleep and the ability to promote safe driving above all other considerations, including economic.”

Data to back up the proposed changes were seemingly on the way; the Federal Motor Carrier Safety Administration originally issued a sleeper berth study that would analyze safety aspects of splitting sleeper berth periods. However, the safety administration later canceled the study quietly on grounds that it was no longer necessary.

Conde said the cancellation of the study was concerning.

“Moves like that are a little problematic because it undermines the reasoned approach that we would like that keeps safety the top priority,” he said.

Scott Hanson, captain of the Idaho State Police’s Commercial Vehicle Safety department, said he hadn’t been aware of the proposed deregulation of hours but wouldn’t want reduced rest time for drivers and would want clarification on any changes.

“The Federal Motor Carrier Safety Administration needs to look at giving drivers more leeway to split their rest hours more efficiently,” Hanson said, “but to benefit fatigue-wise and give them increased relaxation, not the other way around.”

Most drivers in the trucking industry are paid by the mile. Reducing drive times, said Boren, may lead to drivers speeding or pushing themselves through fatigue.

“While the seasoned driver probably can drive more than what they are allowed, the average driver may not be able to,” said Boren. “When you add in that what they are carrying is not theirs, you must add in some protection for the shipper.”

The question of whether hours of service regulations can be reduced while maintaining high enough safety standards “is nearly impossible to answer,” he said.

“Truckers are some of the most highly trained drivers on the road today,” Boren said. “The issue is not always them, but other drivers around them. When there is an accident involving a trucker though, it almost always has terrible results.”

Riley Bunch is the night reporter for the Idaho Press. Reach her at 208-465-8169 or follow @rbunchIPT on Twitter.

The busiest spot on Interstate 84 in the Treasure Valley in 2017 was between Boise and Meridian. According to ITD, 133,000 vehicles traveled east on the corridor between Meridian and Boise per day that year. Of those, 8,700 were commercial trucks and 124,300 passenger cars.