BOISE — As tensions rise between Central District Health Board members, a mask order might be on the way for Valley County, and Ada County gyms could face a closure to cut viral transmissions in the Treasure Valley.

Valley County Commission Chairman Elting Hasbrouck, a member of the health district board, requested the board consider a mask order similar to the one passed in Ada County.

“Business owners have been requesting it for a couple of weeks. It’s been getting worse up here and this is the next step,” Hasbrouck said.

Valley County, home to McCall, is the site of several popular weekend destinations for Treasure Valley residents. Hasbrouck said the Valley County Commission had become deeply concerned about the rising case numbers in its jurisdiction, which doubled in the last week, he said.

The board next week will consider a number of other responses to the pandemic. Board member Dr. Ted Epperly asked the rest of the members to consider closing gyms temporarily due to Idaho’s high rate of infection: 214 people per 100,000 population, 74 more than the average infection rate across the United States.

Those infection rates are reflected in school district’s community transmission ratings, as measured by the Idaho State Board of Education’s Back-to-School Framework. 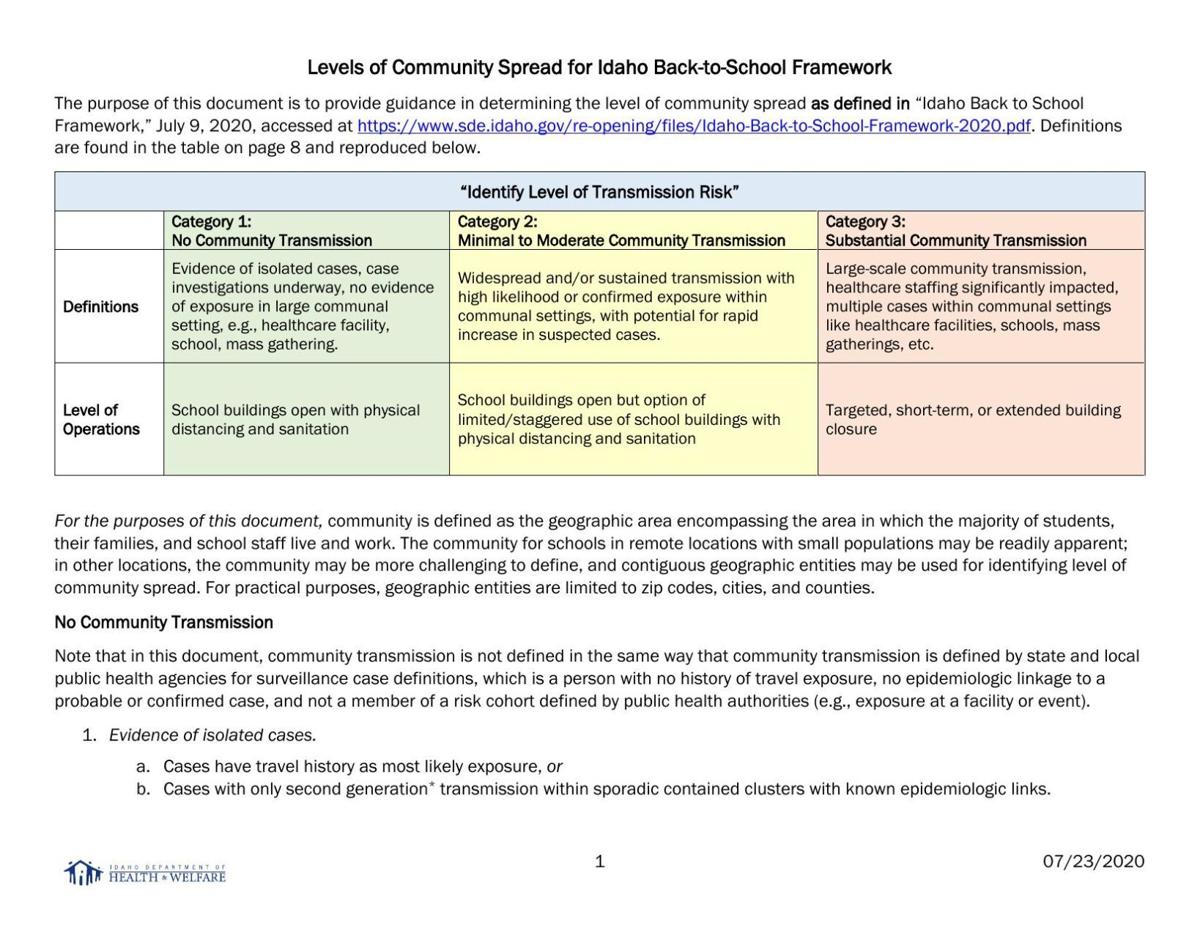 Those zones have created a rift between board members. Board member and Idaho House Rep. Megan Blanksma from Elmore County has been pushing for easily understandable metrics that are similar to the Idaho State Board of Education’s, while also offering a “path in and out” of Central District Health’s restrictions. On Tuesday, she and Epperly got into a heated discussion about the data being used by the district to make those decisions.

“We have been very clear in following Rebound Idaho’s guidance, and those data points are based around syndromic data, around epidemiological data. For you to say this has been done without data is wrong,” Epperly said.

Blanksma said she was looking for “structure” in those decisions.

“Why are these certain orders being implemented? If you want to use what is in the White House model, at least call it out so people can understand what is going on,” Blanksma said.

Epperly said if the public was having difficulty understanding the board’s decisions, the board should “publicly address what they are.”

“Let’s put out the epidemiological, the syndromic data … so we don’t continue to have this circular discussion,” Epperly said. “And then you can stop saying this is not based on data.”

Blanksma then noted that on the Idaho House floor “name-calling was prohibited,” before Ada County Commissioner Diana Lachiondo stepped in. Lachiondo pointed out that while Central District Health had been publishing the data used to make its decisions online, getting the right data sets had been challenging.

“Hospital leaders are scared, they are worried, they’ve had to pull staff from other places,” Lachiondo said. “This is going to be a balancing act, and we are going to continue to have to refine (our response).”