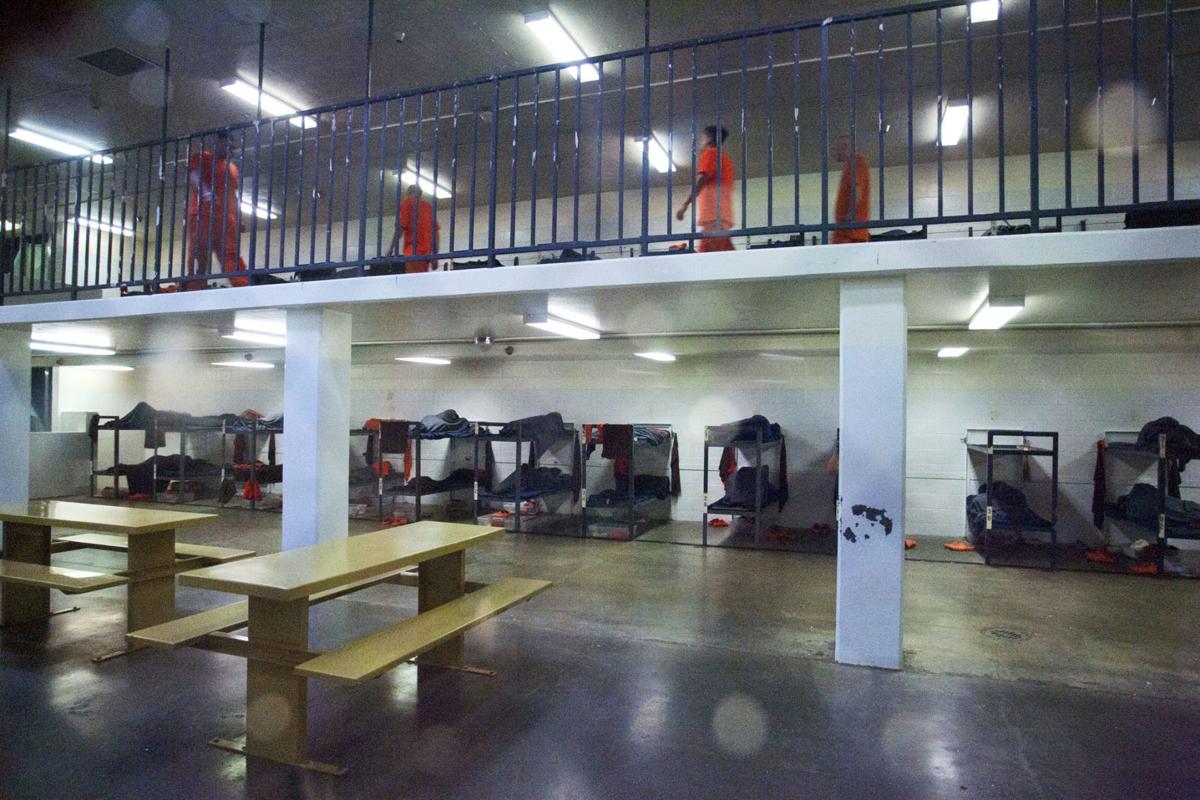 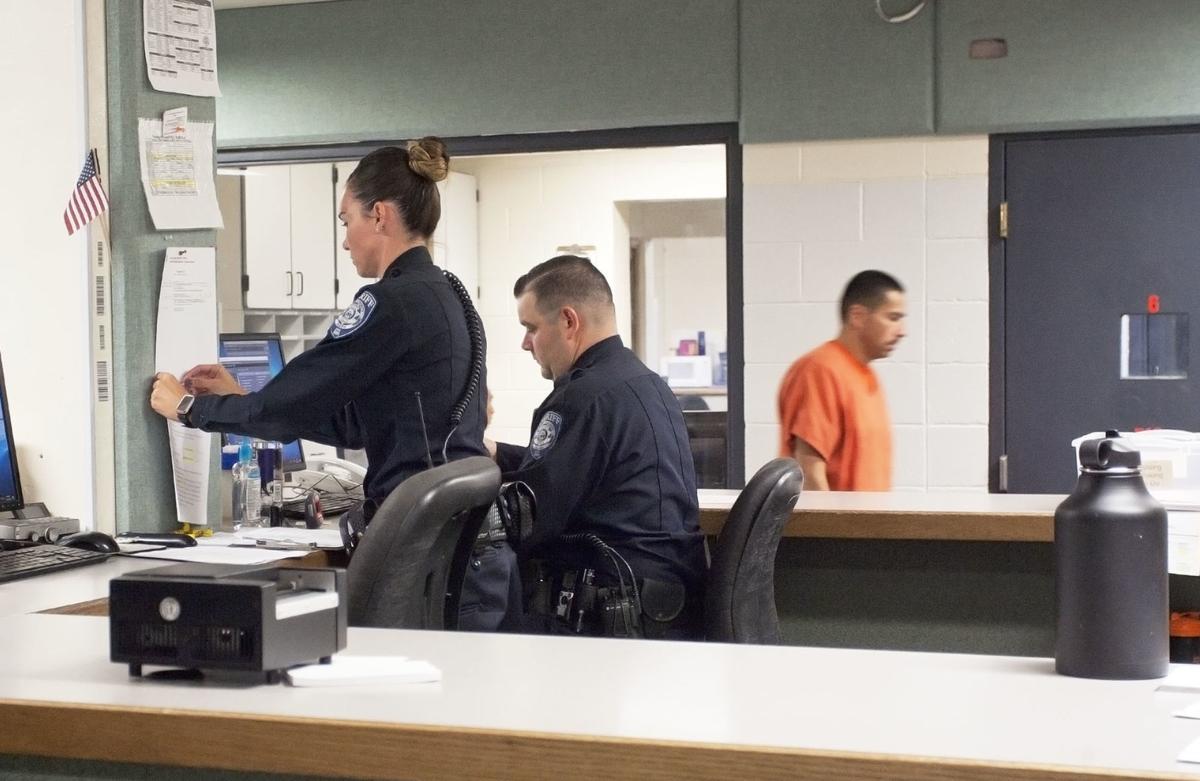 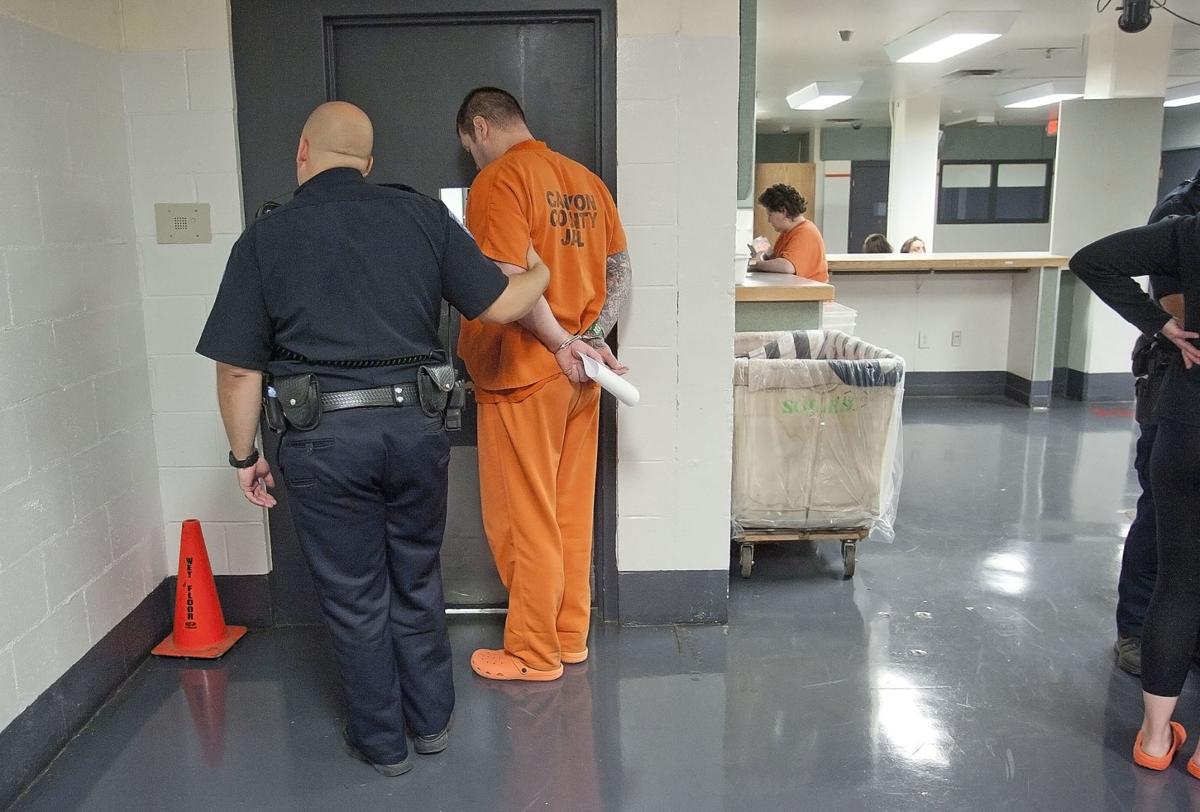 Inmates are processed on arrival at the Canyon County Detention Center, Friday, Aug. 17, 2018. 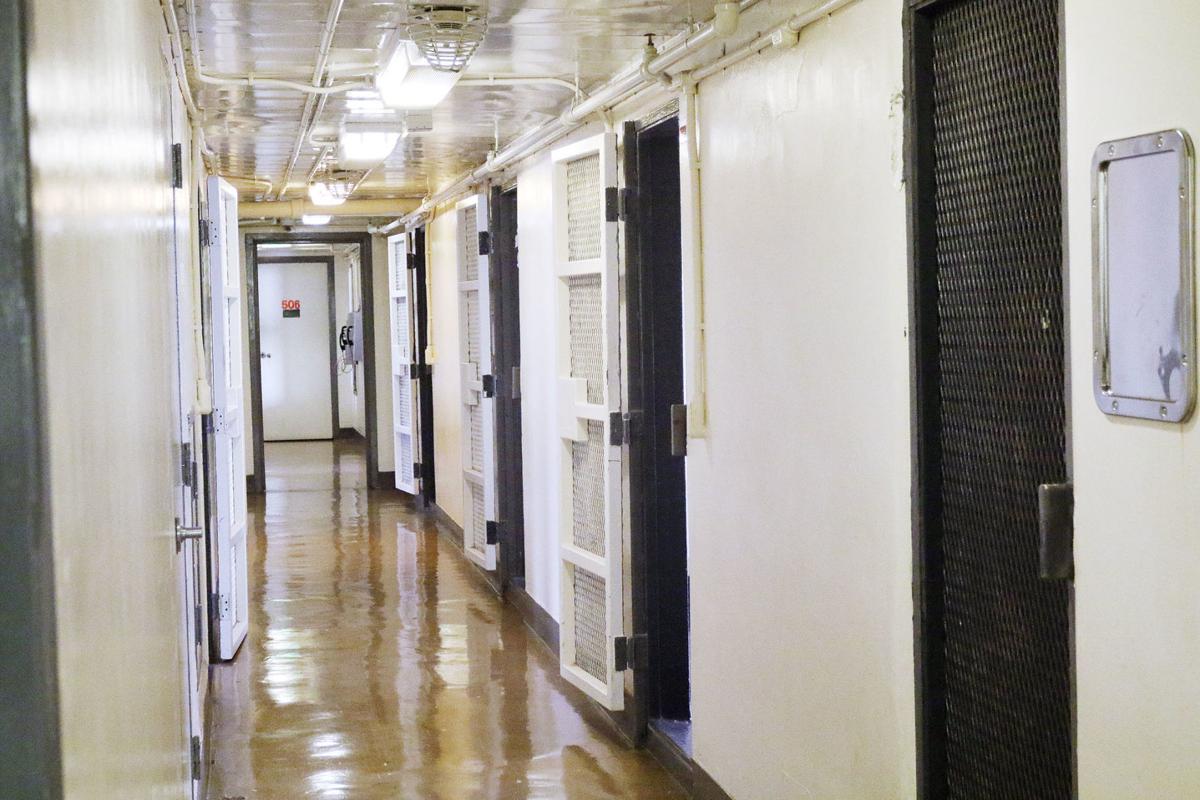 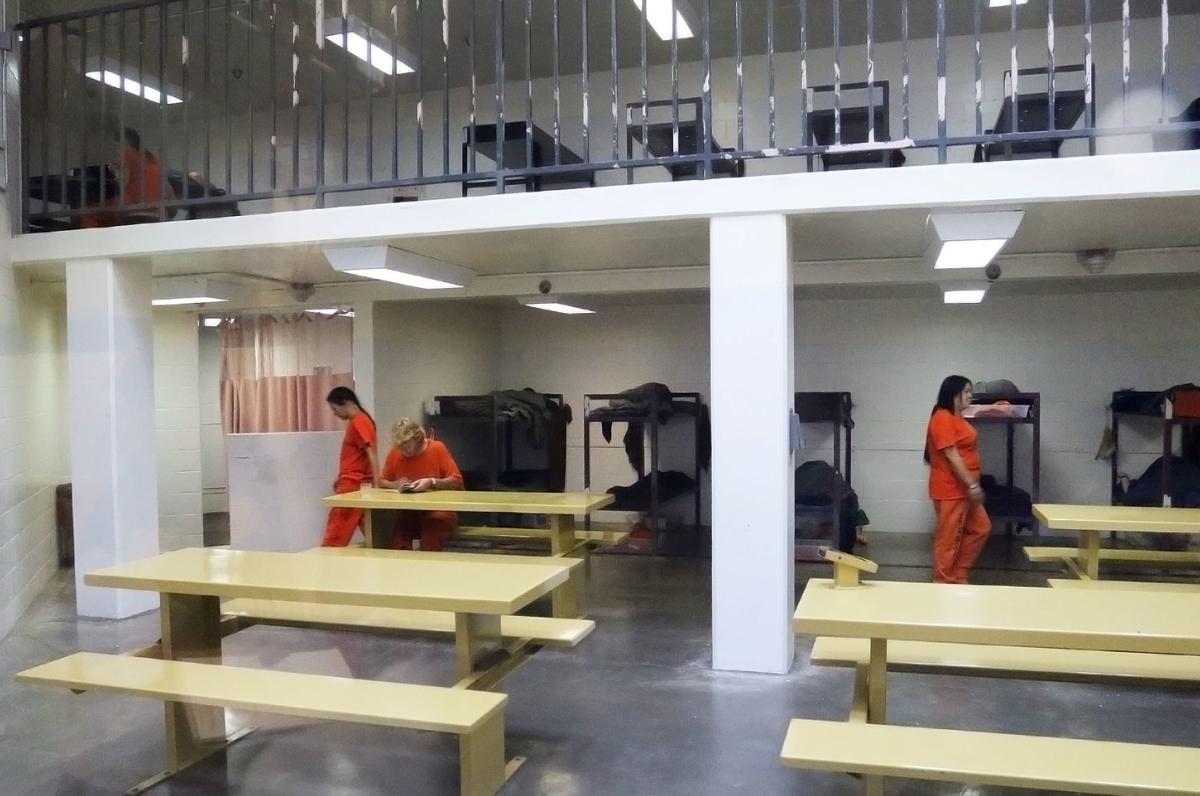 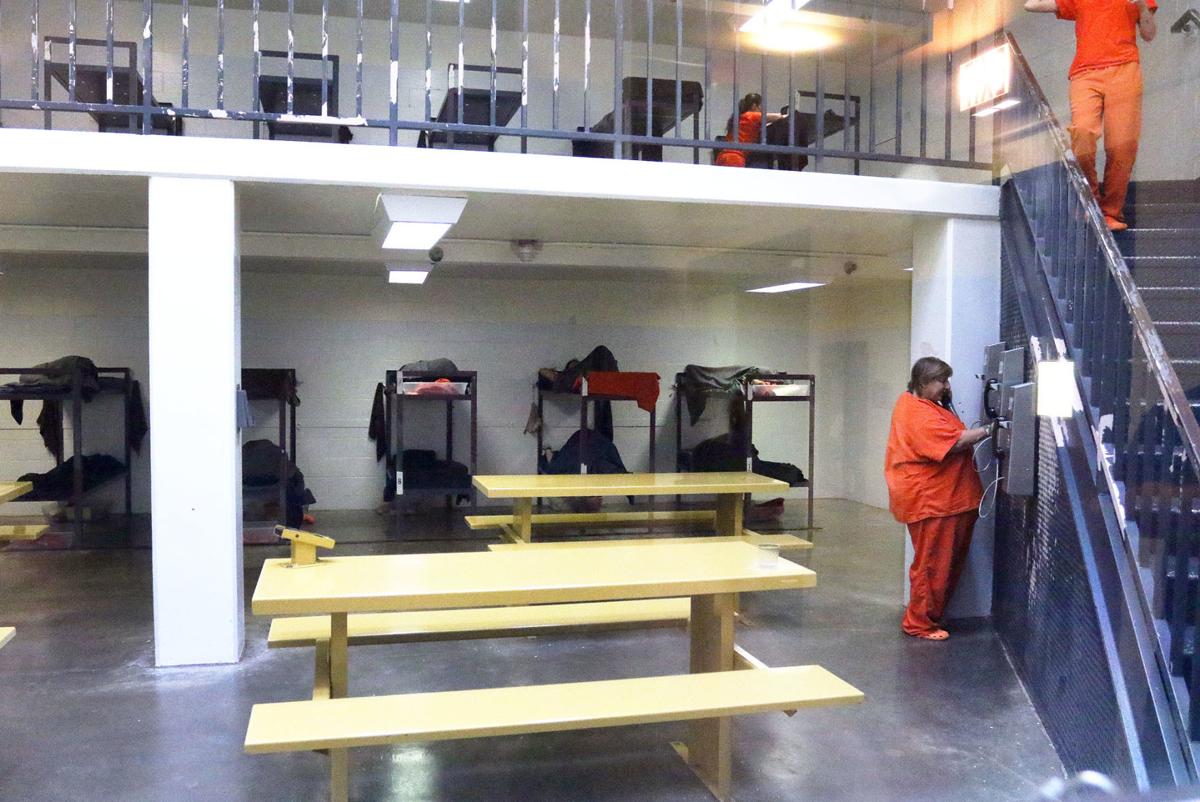 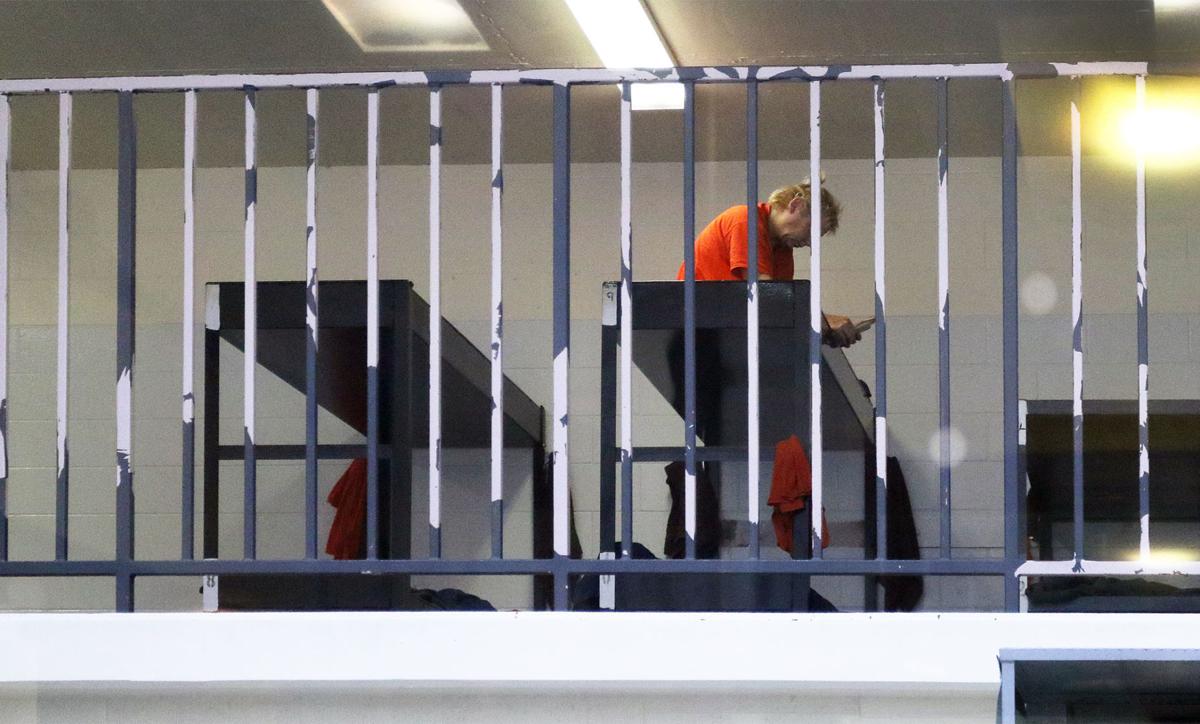 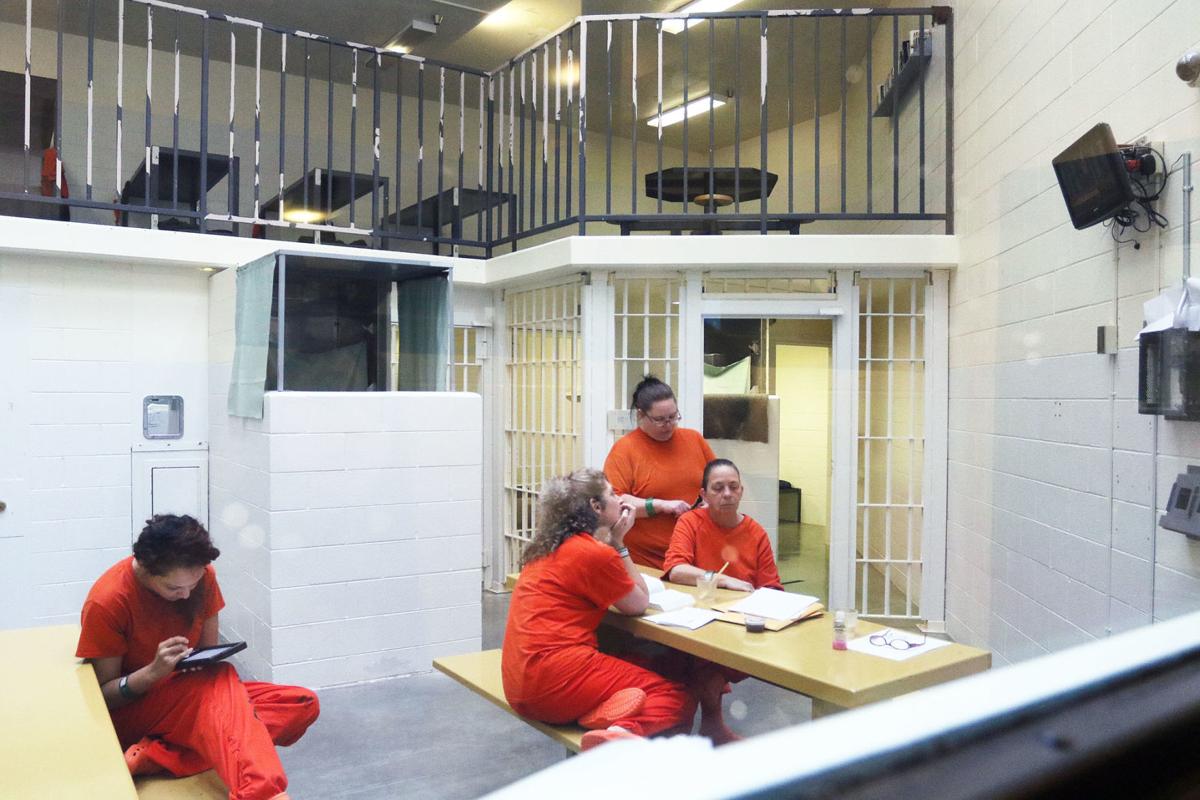 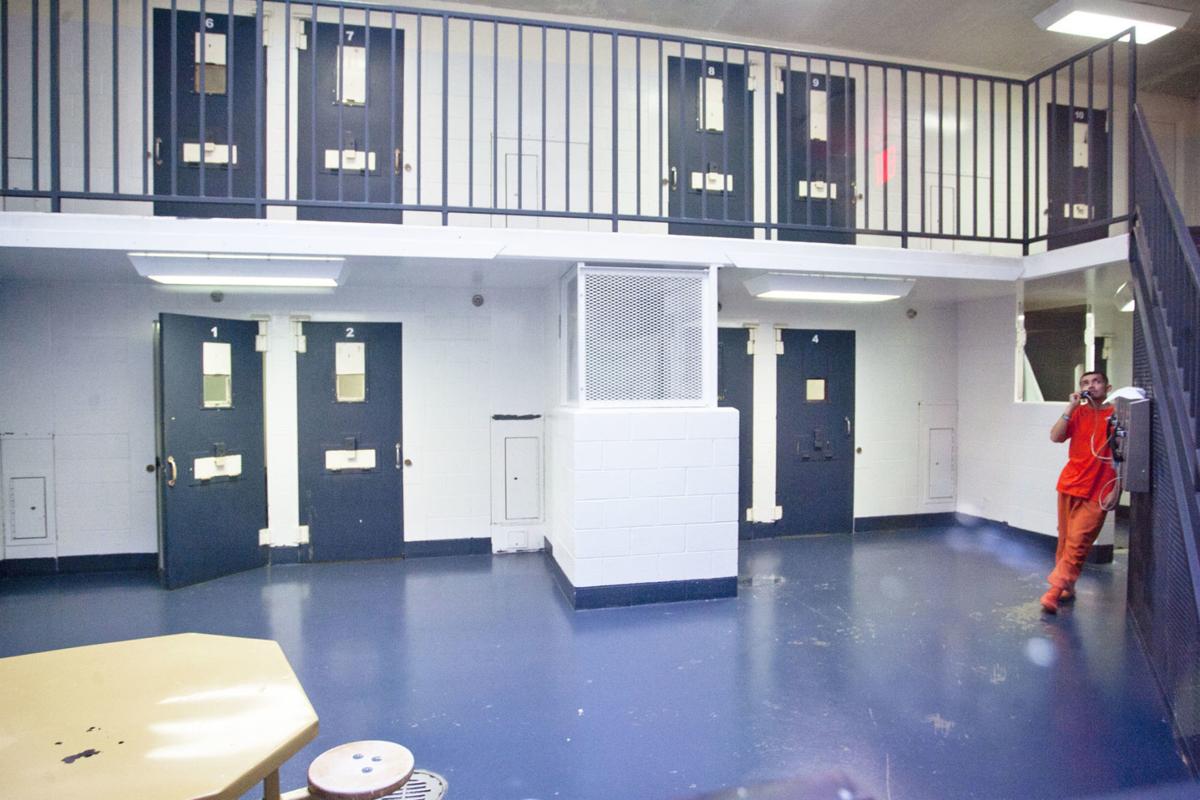 An inmate uses the phone at the Canyon County Detention Center, Friday, Aug. 17, 2018. 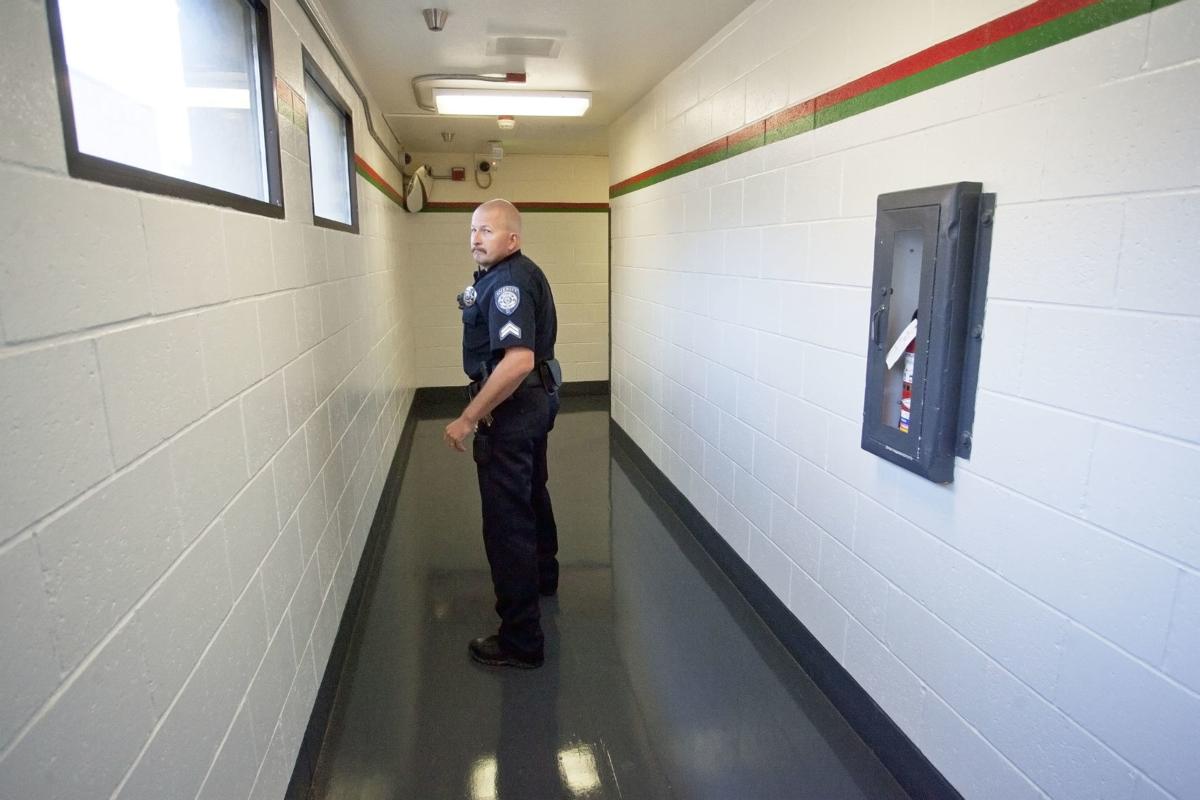 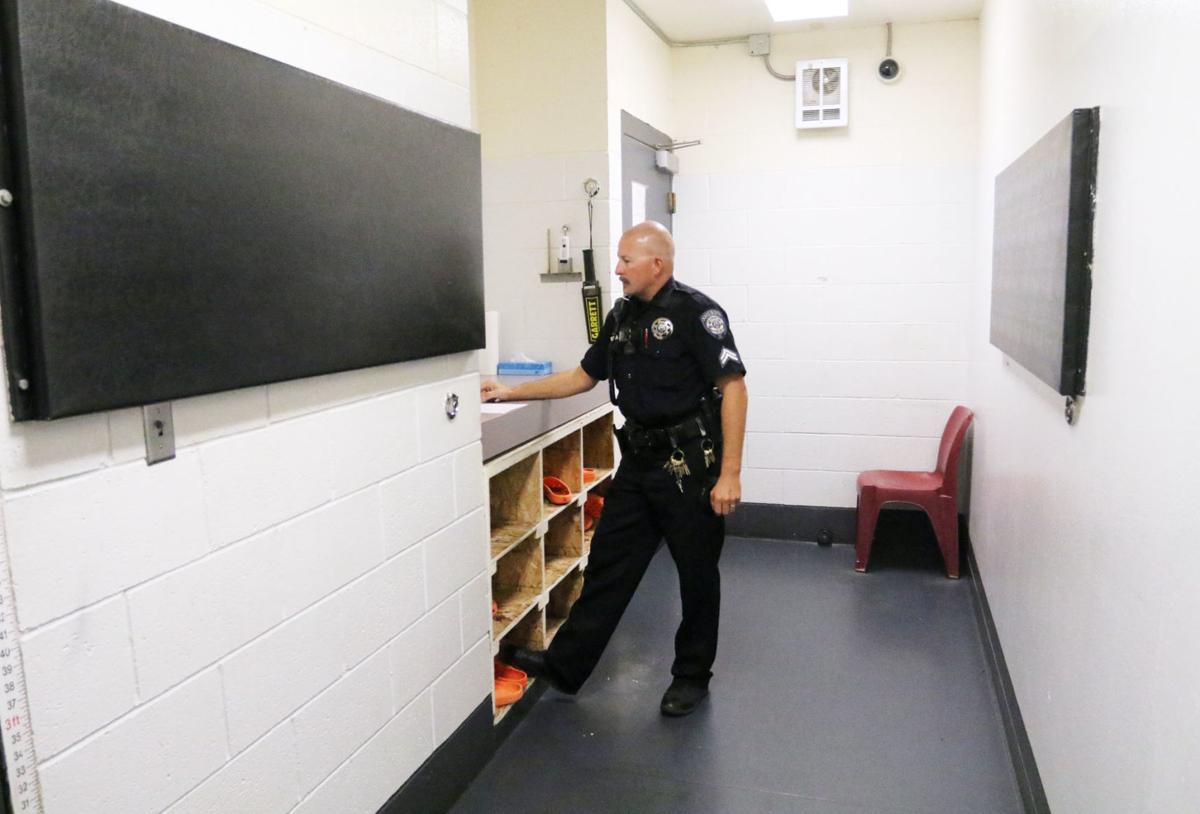 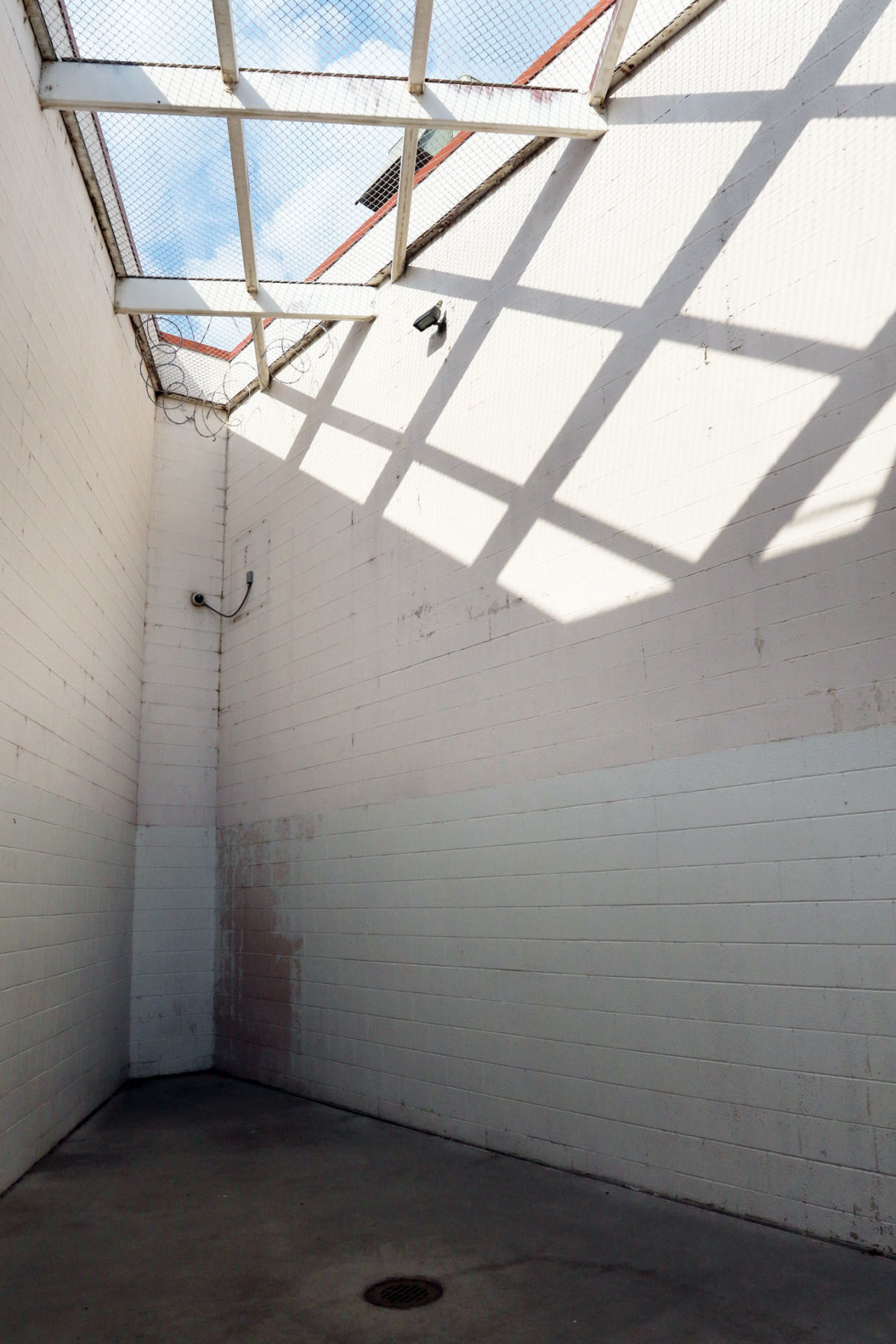 A sliver of sunlight shines into a recreation area at the Canyon County Detention Center, Friday, Aug. 17, 2018.

Inmates are processed on arrival at the Canyon County Detention Center, Friday, Aug. 17, 2018.

An inmate uses the phone at the Canyon County Detention Center, Friday, Aug. 17, 2018.

A sliver of sunlight shines into a recreation area at the Canyon County Detention Center, Friday, Aug. 17, 2018.

CALDWELL — Canyon County commissioners on Monday approved a lease with a Missouri company to install modified steel truck trailers in the parking lot of the county jail for female inmates as a way to alleviate jail overcrowding.

The county awarded the contract to All Detainment Solutions without seeking proposals from other companies. Commissioners said the jail’s crisis levels of overcrowding warranted sole-source procurement. Citing Idaho code, the county argued soliciting further competition would be “impractical, disadvantageous, or unreasonable under the circumstances.”

Even with the approval of the contract for new temporary jail quarters, made out of steel truck trailers, jail staff still face at least a year juggling a consistently overcrowded jail.

Canyon County jail Capt. Daren Ward guessed the 122-bed facility — exclusively for Canyon County’s female inmates of all classifications — won’t be dropped off in the jail’s parking lot and assembled on-site until April 2019. Then, the facility likely won’t be operational until later that summer. Ward said a jail is considered “at capacity” when 80 percent of the beds are full, allowing jail staff the leeway to separate feuding inmates or shut down rooms for emergency repairs.

“We have not been under 80 percent this year,” Ward said. “There is not a doubt in my mind.” 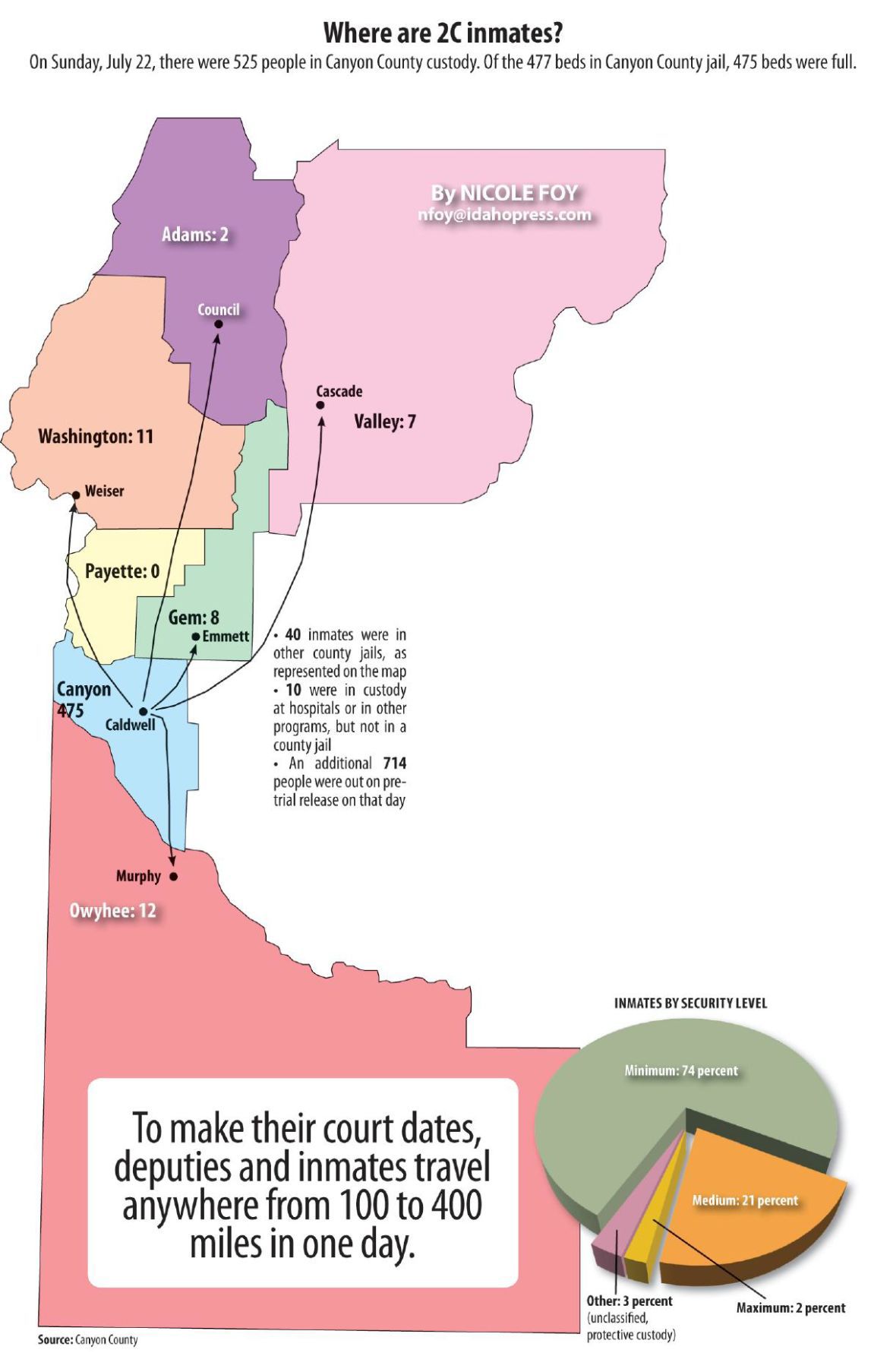 The Idaho Press considered total population, selected inmate demographics, as well as how far away the Canyon County jail regularly sends inmates because of lack of space at the Dale G. Haile Detention Center in Caldwell.

On Sunday, July 22, there were 525 people in Canyon County jail custody — but just 475 were at the Dale G. Haile Detention Center. Forty were housed in county jails from Murphy to Weiser to Council. Ten more were in local hospitals, U.S. Marshals custody or in other programs around the area.

“You run into problems when you have the new intake who is semi-combative, but I can’t just leave them sitting out on the benches in booking,” Ward said. “I have to get them into a cell where usually everyone else is safe. Usually, we’re juggling people around and trying to figure where can I move people to try to get a cell open for them.”

Still, there are several other factors affecting jail population.

“Our female population — since mid last year — has shot up to heights that I have never seen,” Ward said.

Ward said the main reason the temporary jail trailers will be only for female inmates of all classifications is because that’s the county’s biggest need. On the same Sunday, July 22, 100 female inmates were in the custody of the Canyon County jail. Fifteen of those women were in other county jails.

“In the trailers, they will have four-person cells,” Ward said. “They can move people around. But up here, they have very little flexibility.” 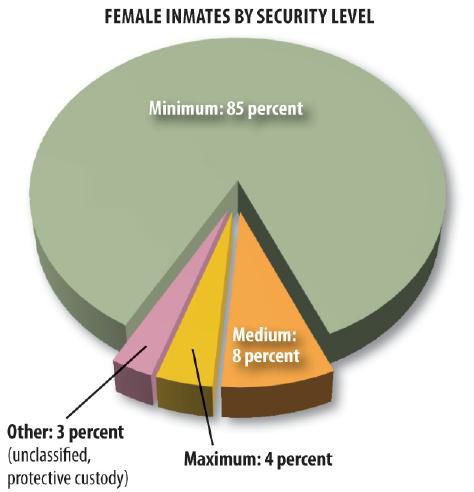 When the Idaho Press toured the Canyon County jail on Aug. 17, Ward and Cpl. Russell Bowers pointed out areas of concerning designs that the sheriff’s office wouldn’t want to repeat in a new jail. Canyon County commissioners are still battling over long-term plans for a 1,044-bed jail off Highway 20/26 in rural Caldwell and mulling a May 2019 bond to pay for it. But jail staff said moving female inmates out into the jail trailers would free up at least 62 standard beds and allow maintenance staff and deputies the breathing room they need to safely make repairs.

In several units the Idaho Press viewed, paint was chipping and ceiling lights were out — all repairs that are difficult to make when nearly every bed in the facility is full.

The temporary trailers could also help jail staff reduce use of two “annex” units that are holdovers from a portion of the jail originally built in 1948. Those wings — one for female inmates and another that houses male inmate workers — are far darker and more difficult to secure than the rest of the jail. An additional 14 beds currently housing female inmates in Annex 2 would also be opened up for male housing — solving a staffing problem, too.

“Those 14 beds that we have down there, I have to have a female deputy work in because there is a direct line of sight into the toilets and shower areas,” Ward told Canyon County elected officials during a meeting earlier this year. “So I’m tying up one of my female deputies there all the time.”

After installing the temporary trailers, Canyon County will likely close the female annex for repairs and then relocate male inmates to the annex. The sheriff’s office would hire one new deputy and move two deputies to the temporary facility.

Overall, jail staff said a total of 122 beds available for female inmates and an additional 76 beds opened up for male inmates would immediately solve the Canyon County jail’s greatest liability and cost — housing inmates outside the county. So far in 2018, the Sheriff’s Office has spent $512,800 on housing inmates outside the county. Deputies and inmates will also be able to cut down the amount of trips spent transporting inmates to places like the Valley County Jail in Cascade, as transport vans battle traffic on state Highway 55 from a stream of Treasure Valley residents heading to the mountains to camp.

“It’s a huge drain on both our manpower and just the fiscal value to the county,” Ward said.

The installation of the stainless steel trailers and first year of the lease will cost Canyon County $4.5 million, according to the final contract signed Monday by Commissioners Tom Dale and Pam White. Commissioner Steve Rule voted against the contract.

Canyon County’s facility would use 28 stainless steel truck trailers — each 52-feet long — to build temporary jail “pods” to house all classifications of the county's female inmates.

Originally proposed as an $11 million total, seven-year lease, the contract signed Monday includes a total sum of $4.5 million for the installation and first year rent of the facility. Canyon County is required to pay $2.25 million by Sept. 1 and the remaining $2.25 million by the installation and beginning of the lease year. After the first year, the county can renew the lease at a rate of $1,454,085 a year, for up to four more years.

If Canyon County wants to continue using the facility beyond the fifth year, the county will have the option to purchase the facility for a final payment of $1.9 million.

Commissioners Dale and White again emphasized their intent to keep the facility as a temporary solution, setting their sights on a new jail in rural Canyon County funded by a bond or a future local option sales tax bill.

"I think you guys are authorizing a permanent solution — because I won’t be supporting it," Rule said before the vote. "When is it no longer temporary? Five years? Seven years?"