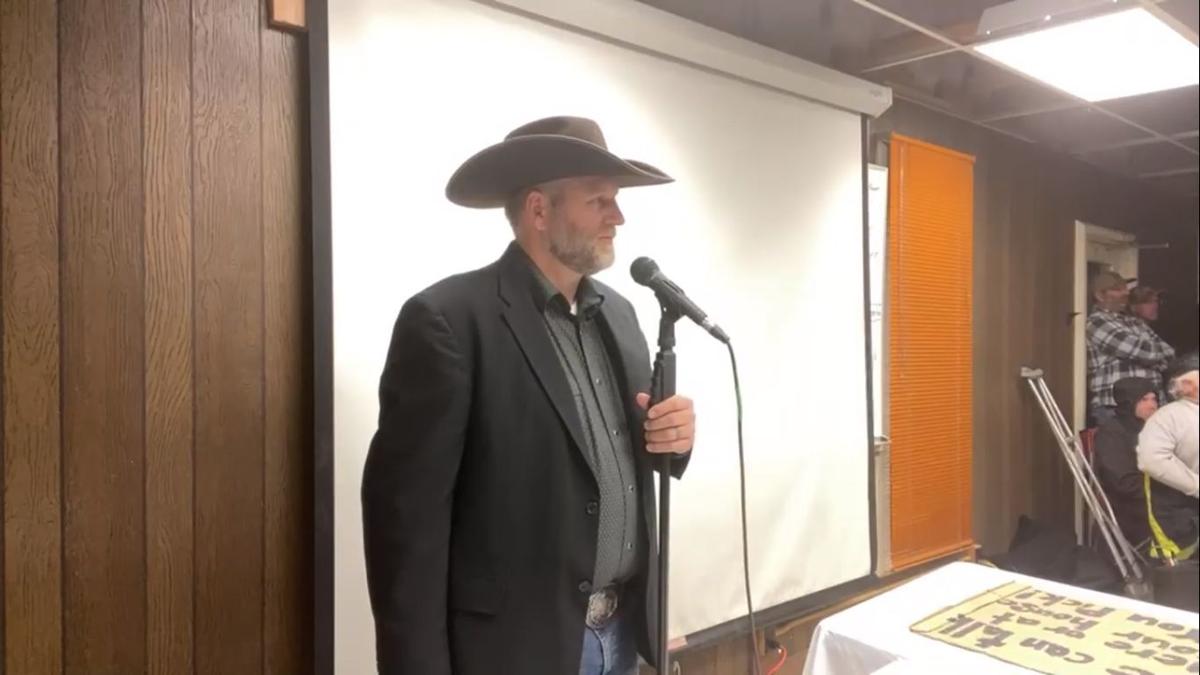 In this screenshot of a web-streamed meeting, activist Ammon Bundy speaks to members of People’s Rights, a conservative group that opposes coronavirus mandates, at an Emmett warehouse on Dec. 10. 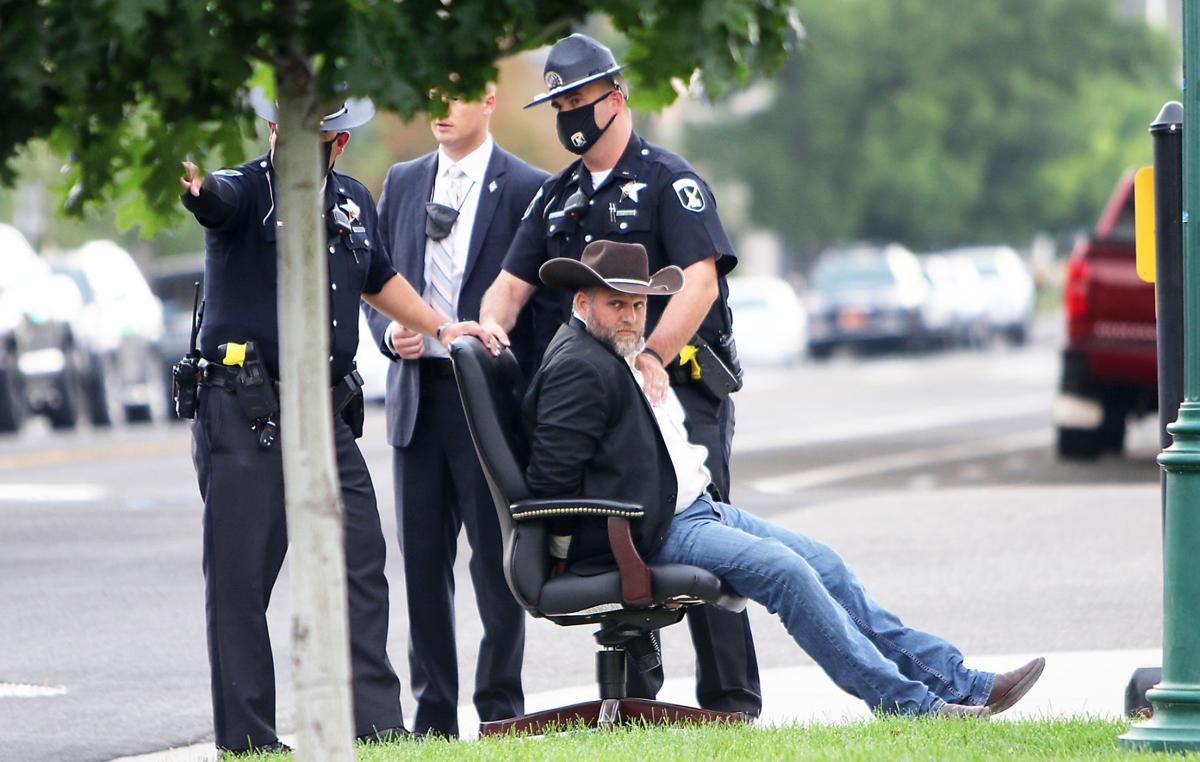 Idaho State Police take Ammon Bundy, in an office chair, toward a waiting patrol car after he was arrested at the Idaho Capitol in Boise on Aug. 25, 2020. Bundy was arrested twice during the Idaho Legislature’s special session that week on charges of misdemeanor trespassing and resisting and obstructing officers.

In this screenshot of a web-streamed meeting, activist Ammon Bundy speaks to members of People’s Rights, a conservative group that opposes coronavirus mandates, at an Emmett warehouse on Dec. 10.

Idaho State Police take Ammon Bundy, in an office chair, toward a waiting patrol car after he was arrested at the Idaho Capitol in Boise on Aug. 25, 2020. Bundy was arrested twice during the Idaho Legislature’s special session that week on charges of misdemeanor trespassing and resisting and obstructing officers.

BOISE — On Thursday, dozens of people assembled in an Emmett warehouse to prepare to defend themselves from an armed conflict with the government, which they believe is imminent.

Ammon Bundy, a conservative activist known for leading armed standoffs with government agents, led the meeting of People’s Rights, a group he founded earlier this year to organize against government coronavirus mandates.

This year, the group has protested — mostly peacefully, although not always — at health districts; at the homes of public officials; at this year’s special session of the Idaho Legislature; and at police agencies that have cited or arrested its members.

Throughout Thursday’s meeting were ominous references, by Bundy and others, to an escalation of conflict and the need to prepare “before the world comes to an end.” Ahead of the meeting, a text message from the People’s Rights online network administrators suggested the group needed to prepare for “the force that is evident to come upon us.”

The meeting followed the arrest two days prior of a People’s Rights member, who was charged with disturbing the peace while protesting at the home of Diana Lachiondo, a member of Central District Health’s board of health.

Weapons and ham radio training are among People’s Rights’ recent activities. On Thursday, Bundy encouraged members to train in small militia-style groups of two to 10 people.

Small groups are the “most effective” type of “warfare,” he said.

Bundy, whose lectures are steeped in religious parable, implored People’s Rights members only to use violence in defense, which is “righteous.”

“It is never righteous to use it in offense,” he said.

It’s unclear what event or action would trigger armed defense by the group. In 2013, Bundy participated in an armed standoff — sparked by a conflict over public lands — with federal agents at his father’s ranch in Nevada. In 2016, Bundy led another armed standoff with federal law enforcement at Oregon’s Malheur National Wildlife Refuge, also sparked by a dispute over public lands. The 40-day standoff led to one death — LaVoy Finicum, a member of the occupation group, was shot by law enforcement during an arrest attempt.

Winegar said he didn’t know specifically what the liaison officer had talked to People’s Rights about, but in general, he said, liaisons explain the law to groups and how to abide by the law while still expressing their freedom of speech.

“What we do is we monitor public information and certainly information that comes to us,” Winegar said. “If it relates to violence or advocating for violence against any specific individual or group or political entity that’s very concerning for us. And so when we do come across that type of information or someone provides that to us then we certainly look to see if the violence aspect of that crosses the line into criminal activity. If it does, then we would take appropriate action.”

About halfway through Thursday’s hourslong meeting, Bundy paused to allow people unwilling to or uncomfortable with “physically defending their neighbors” the opportunity to leave. He asked for a show of hands of attendees who have served in the military and been in combat.

Find the agenda and a link to watch the 3:30 p.m. meeting at cdhd.idaho.gov, under the "Upcoming Events" section on the right side of the webpage.

The order would allow sports and visits to long-term care facilities in all four of the health district’s counties: Ada, Boise, Elmore and Valley. Attendance at sporting events would be capped to 10 people, and masks and social distancing would be required.

As with the original draft, violations of the order would be punishable by a misdemeanor, which includes a fine, imprisonment or both; and visits to jails and prisons would be prohibited.

The order would enact a mask mandate in all four counties; currently only two of the district’s counties, Ada and Valley, are under a mask mandate.

The draft order would also impact businesses in all four counties:

People’s Rights wasn’t the only group represented at last week’s Central District Health protest, which had hundreds of attendees, prompted largely by a social media campaign ahead of the meeting by the Idaho Freedom Foundation, Idaho Liberty Dogs, Health Freedom Idaho and others. However, People’s Rights was the only group to take credit for the protests at the homes of board members, an action other protesters condemned.

Winegar said the department is aware of another protest planned for Tuesday afternoon’s Central District Health meeting. He said officers will be partnering with Idaho State Police troopers to police the scene and keep it safe. The department, he said, is apolitical — officers will be there simply to ensure the meeting can proceed in safety.

“We will take appropriate action if violence is committed,” Winegar said.