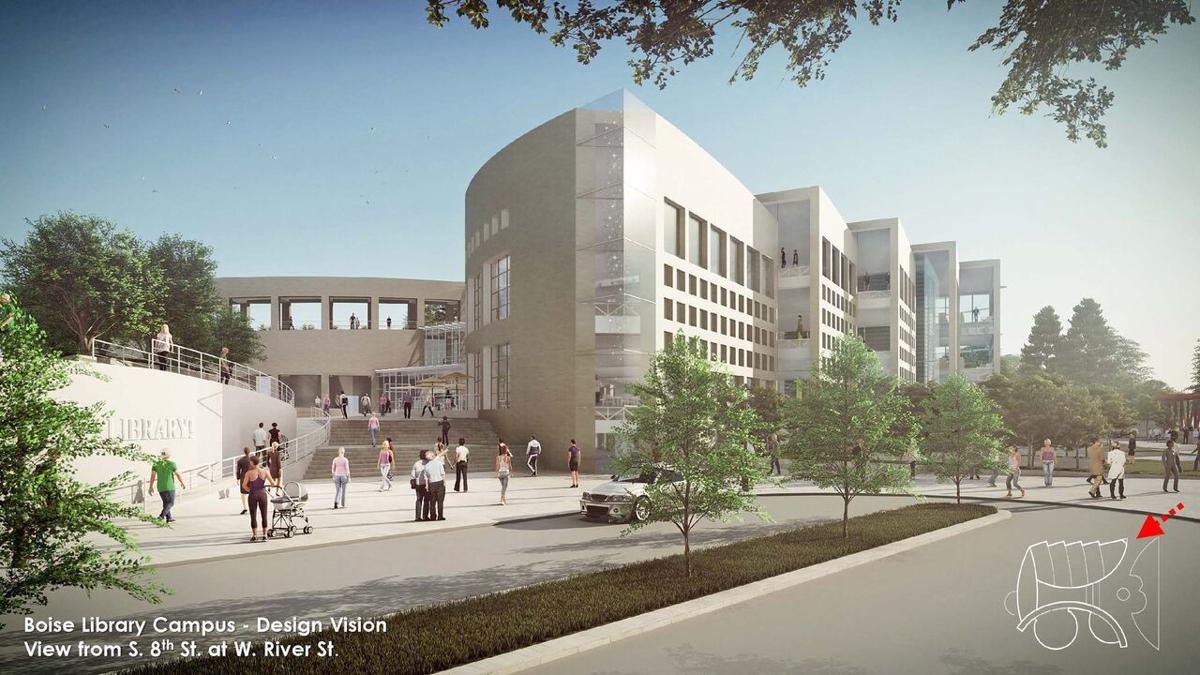 The city of Boise released early renderings in 2018 of its tentative design for the future main library, a project that has since been put on hold. 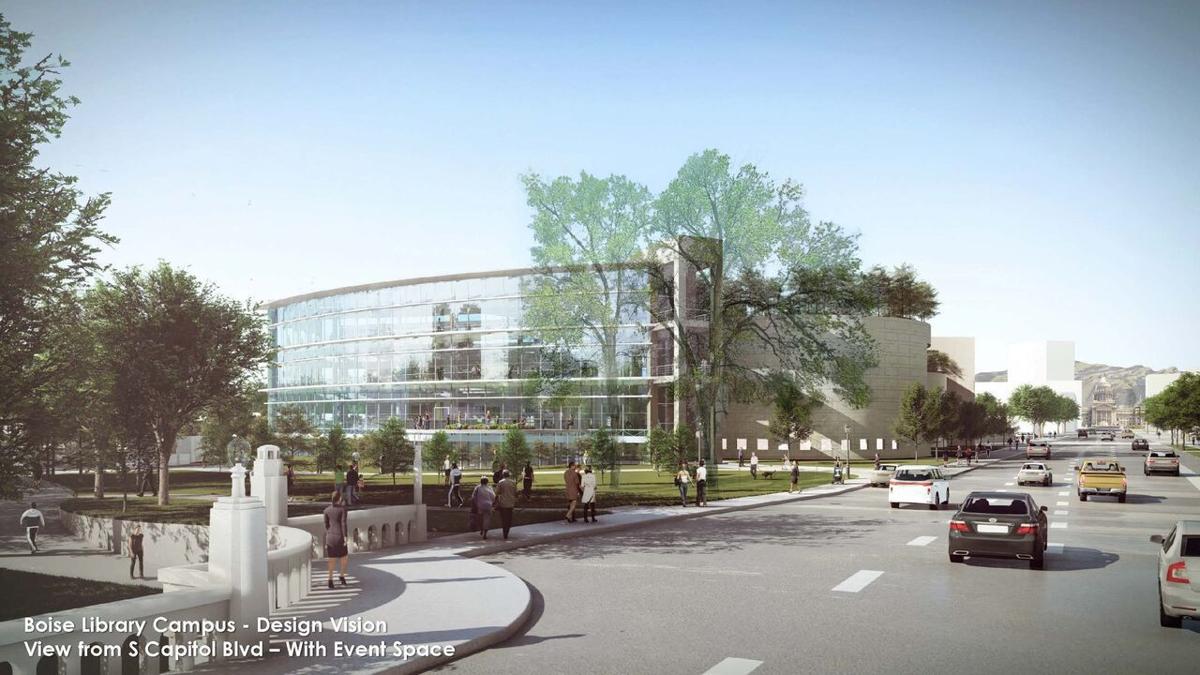 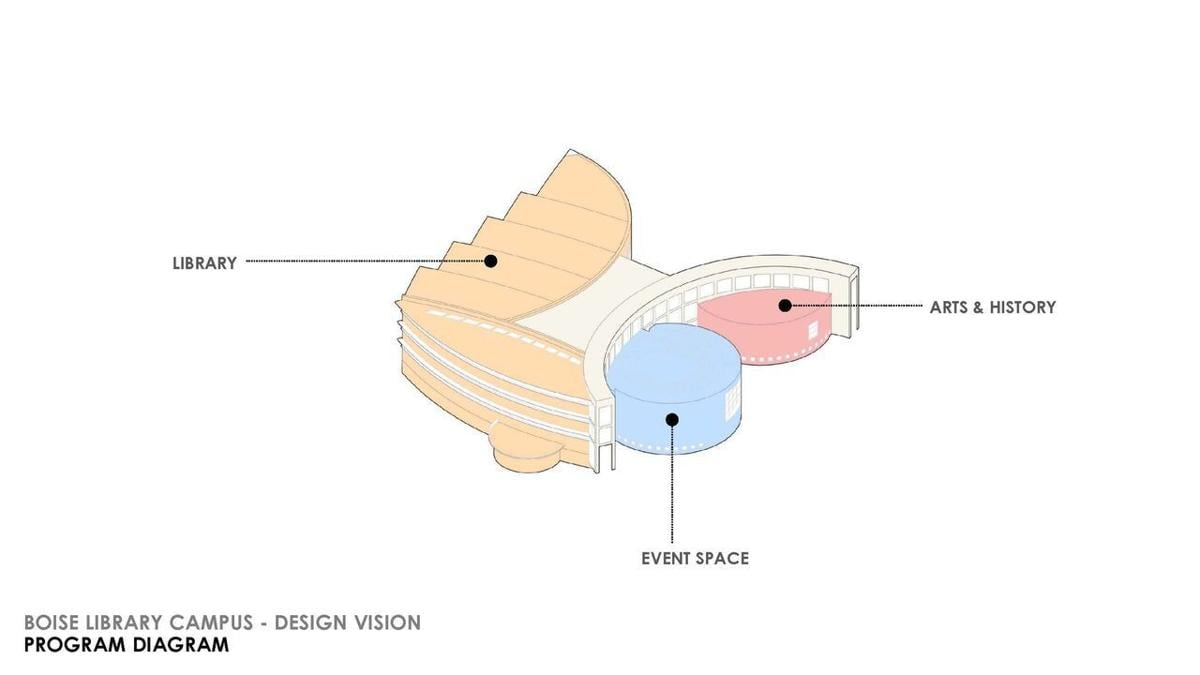 A design view of Boise’s future Main Library. The design will be up for public comment this summer. 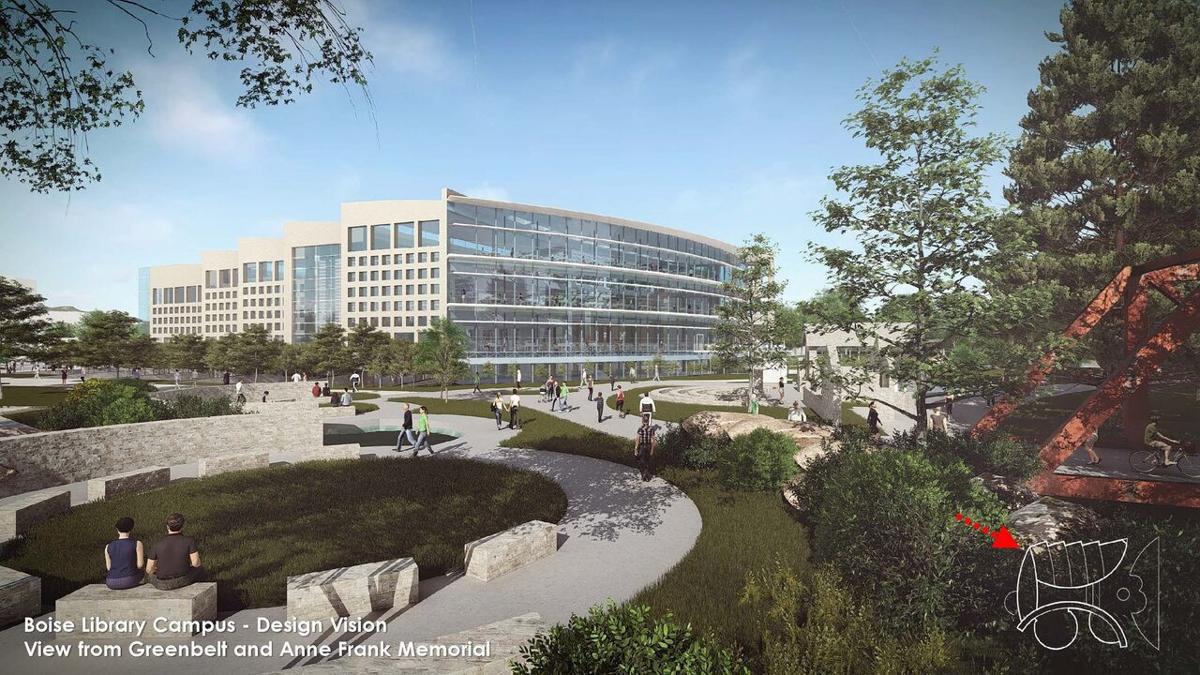 The city of Boise's early renderings of its future Main Library. 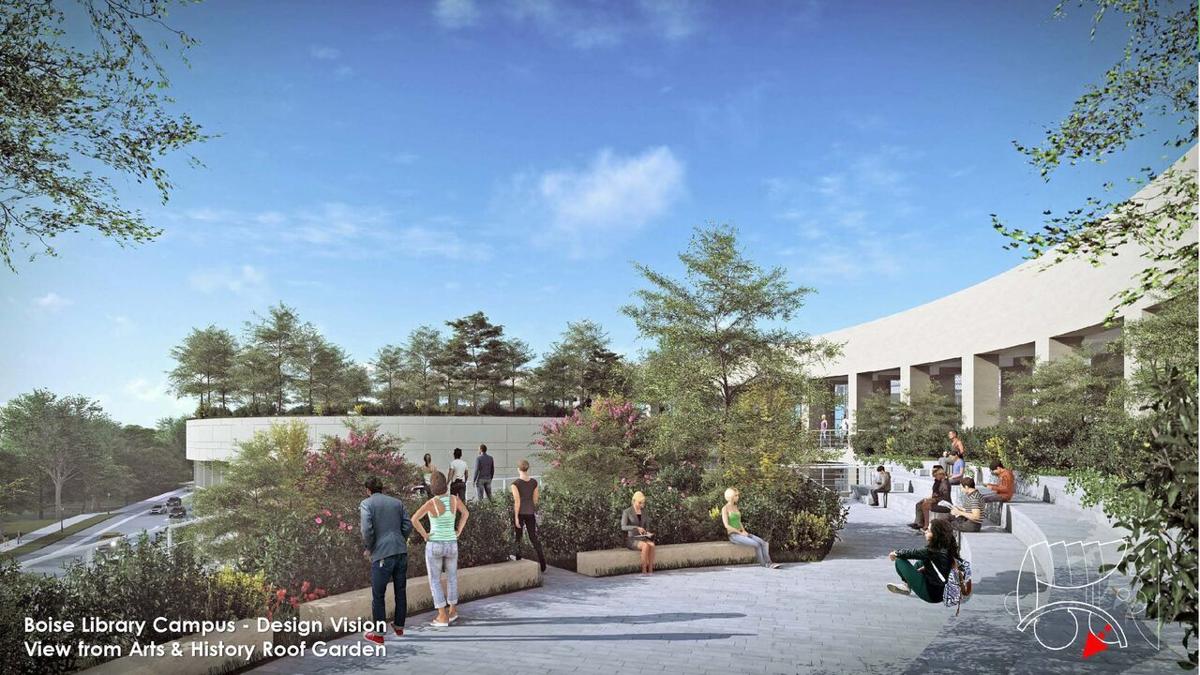 The city of Boise released early renderings in mid-2018 of its proposed Main Library, designed by architect Moshe Safdie. The project is on pause. 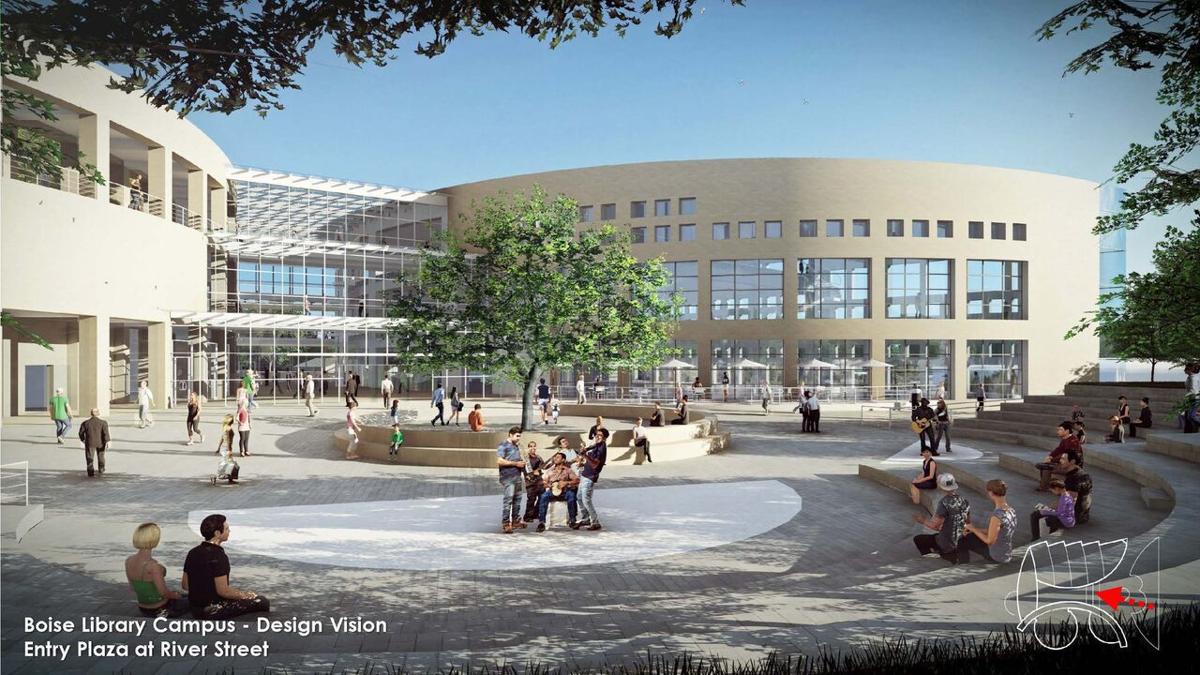 The city of Boise released early renderings of its future main library in 2018. The $80 million to $85 million project is being designed by architect Moshe Safdie. 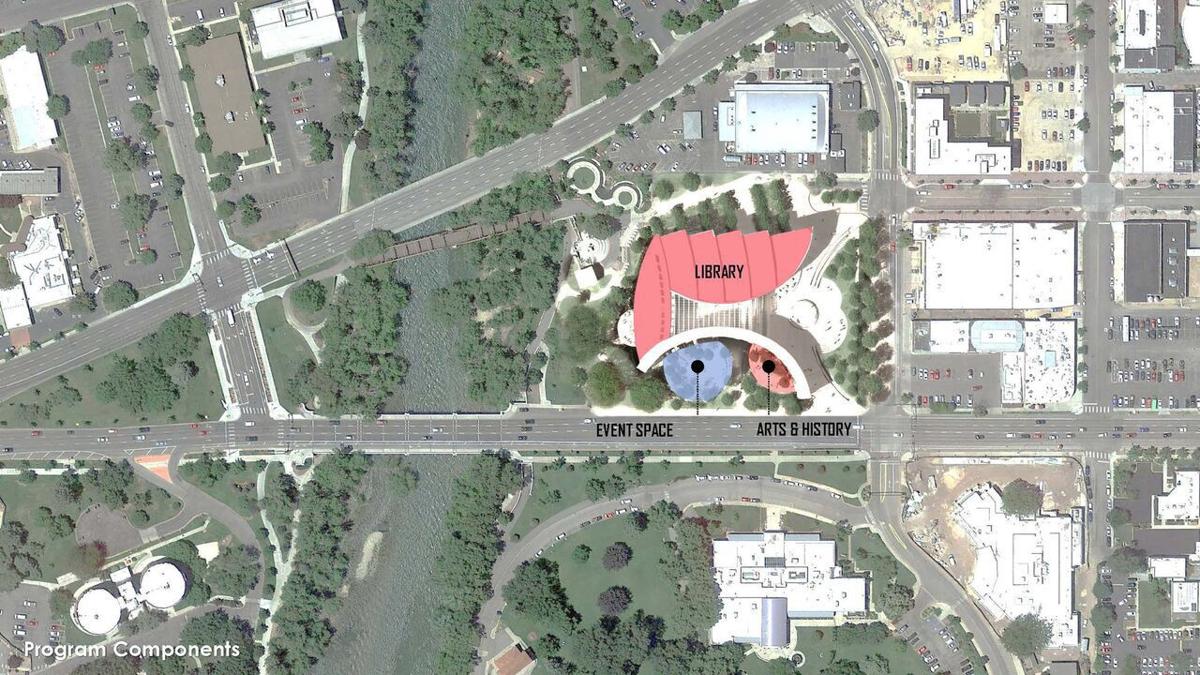 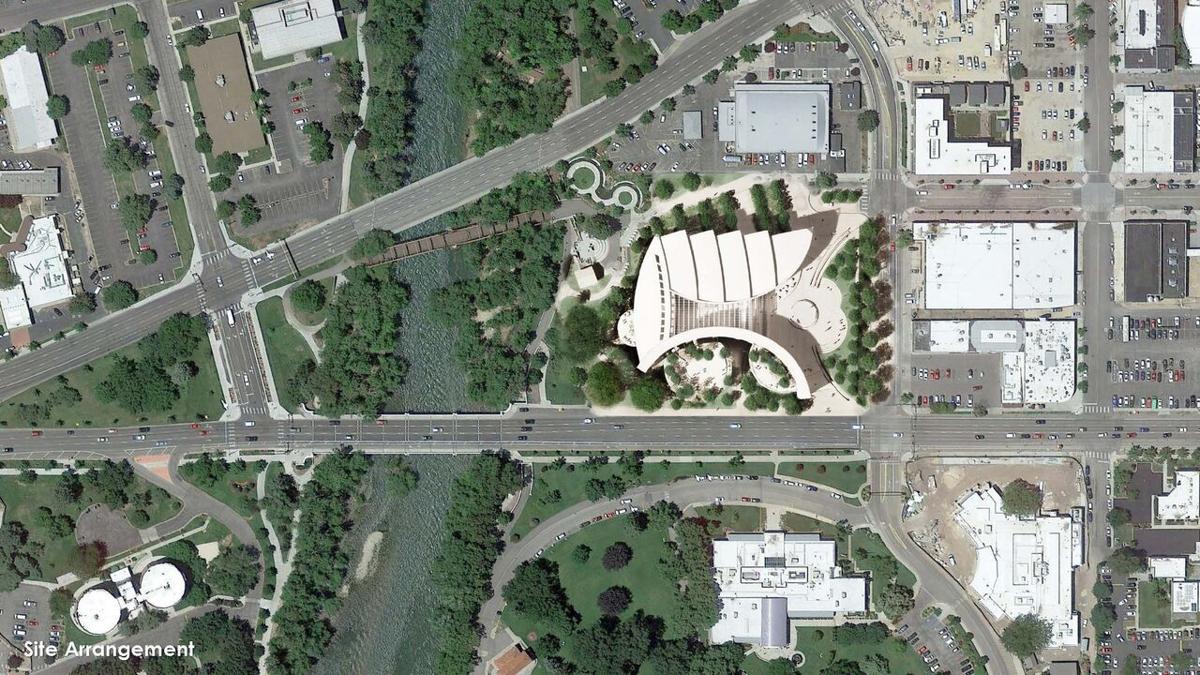 The city of Boise released early renderings in 2018 of its tentative design for the future main library, a project that has since been put on hold.

A design view of Boise’s future Main Library. The design will be up for public comment this summer.

The city of Boise's early renderings of its future Main Library.

The city of Boise released early renderings in mid-2018 of its proposed Main Library, designed by architect Moshe Safdie. The project is on pause.

The city of Boise released early renderings of its future main library in 2018. The $80 million to $85 million project is being designed by architect Moshe Safdie.

BOISE — Boise’s new main library design is ready for its debut. The proposed $80-85 million project, designed by world-famous architect Moshe Safdie, will feature not just a new library, but also an events venue and Center for Arts & History.

The final design, as well as the funding, is still in the approval stage, but the city aims to break ground on the four-story, 150,000-square-foot building in the fall of 2019, with a slated open date in 2021 or 2022. The design will be up for public comment this summer.

“I was over the moon about it,” Boise Library Director Kevin Booe said about the design. “I don’t think there’s anything like this in Idaho. Between Seattle, Portland and Salt Lake City there really is an architectural wasteland, so this is really going to up the game for Boise, but also for Idaho.”

The center of the building is designed with a large lobby to function as a gathering space for visitors to the three facilities, which can also be used for large events. Leading up to the front of the building will be an open plaza, which Safdie calls the piazza, to draw in visitors. The building features towering glass windows for the reading area and a terrace overlooking the Boise River.

“Our vision for the project is really to create a public center and connection point for knowledge, culture and ideas where all of them can combine together and be a magnet to draw people into the downtown core,” Booe said.

The building is proposed to go on the same spot as the current Main Library and its parking lot, at the corner of South Eighth and West River streets. The old library will be torn down to make room.

The city has not finalized its plan for how the current library will operate during construction.

Two options include phasing construction so the Main Library can stay open while the new building is completed, or temporarily relocating the library elsewhere in downtown. It’s likely not every service currently offered at the Main Library will be offered during the transition, Booe said.

According to the city, the library has 130,000 active borrowers, and over the last five years Main Library attendance in downtown Boise has jumped 12 percent. Program attendance has increased 42 percent, which has strained the library’s capacity.

The library design includes an automatic storage retrieval system — a 1,500-square-foot space that would house 400,000 printed materials that could be retrieved upon request in minutes. Another 400,000 items will be on shelves on multiple floors.

Visitors will also be able to access maker-spaces and “emerging technology” experiences. Another possibility Booe is exploring is “Print on Demand,” which allows a library user to download a book that the library does not currently have and have it printed and bound for them to read.

The current library has only 102 parking spaces, while the design goal is to have combined on- and off-site parking totaling 300 spaces. The city is in the process of negotiating off-site parking with an adjacent neighbor, Boise Library spokeswoman Holly Funk said. The deal is not yet final.

In addition to the library, locating the Center of Arts & History outside of City Hall will allow the department to expand its outreach to the public and more easily store its growing public art collection in a conservation lab.

“We’re hoping that the center will do what arts and history has historically done in areas, which is to energize that neighborhood and encourage economic activity around it and give our town a local identity and culture,” Arts & History spokeswoman Jennifer Yribar said.

Despite the price tag, city staff said the library project has generated positive responses from the community and is necessary to meet a growing need.

“Our job and our goal is to prove the relevance of the public library in today’s world,” Booe said. “That’s what we’re trying to do and to show it why it’s important to have a library and to expand the space.”

Boise City Council will consider $69 million for the library project in the 2019 budget year, which starts Oct. 1. The city also plans to use long-term debt and urban renewal tax revenue to fund construction, in addition to a goal of raising $18 million.

The project’s master plan has flexibility to reduce the cost depending on the success of the fundraising campaign, Funk said.

The city has been discussing the need for a new Main Library for years but formally kicked off with studies in 2014 and 2016. Last year, the city held a series of visioning workshops to gather input from the public on what should be included in the design and studied the feasibility of raising the funds necessary for completion.

The new library is not yet named, but Booe said the library’s board of trustees has a policy that if a donor contributes more than 50 percent of the cost of the project, it can be named after that person.

Although the renderings look complete, only a small portion of design has been completed so far.

The public will be able to weigh in on the design at a series of open houses in mid-July. Feedback will be sent to Safdie and the team of architects. Once the alterations have been made, the public will again get to see the designs and provide comment in September before the project begins the final design phase for another year leading up to construction.

The project will be presented tonight to City Council members, who will give feedback on the design. According to Booe, Mayor Dave Bieter, Council President Lauren McLean and Council President Pro Tem Elaine Clegg were heavily involved in the process to select Safdie.

According to city spokesman Mike Journee, the final design is going to be influenced by cost, parking and the neighborhood businesses and residents. Conversations with those nearby are ongoing and will continue to influence the design in the coming months.

“Everyone is at the table and having a conversation, but we’ve still got some things to iron out before we are comfortable saying, ‘OK, here we go,’” he said.