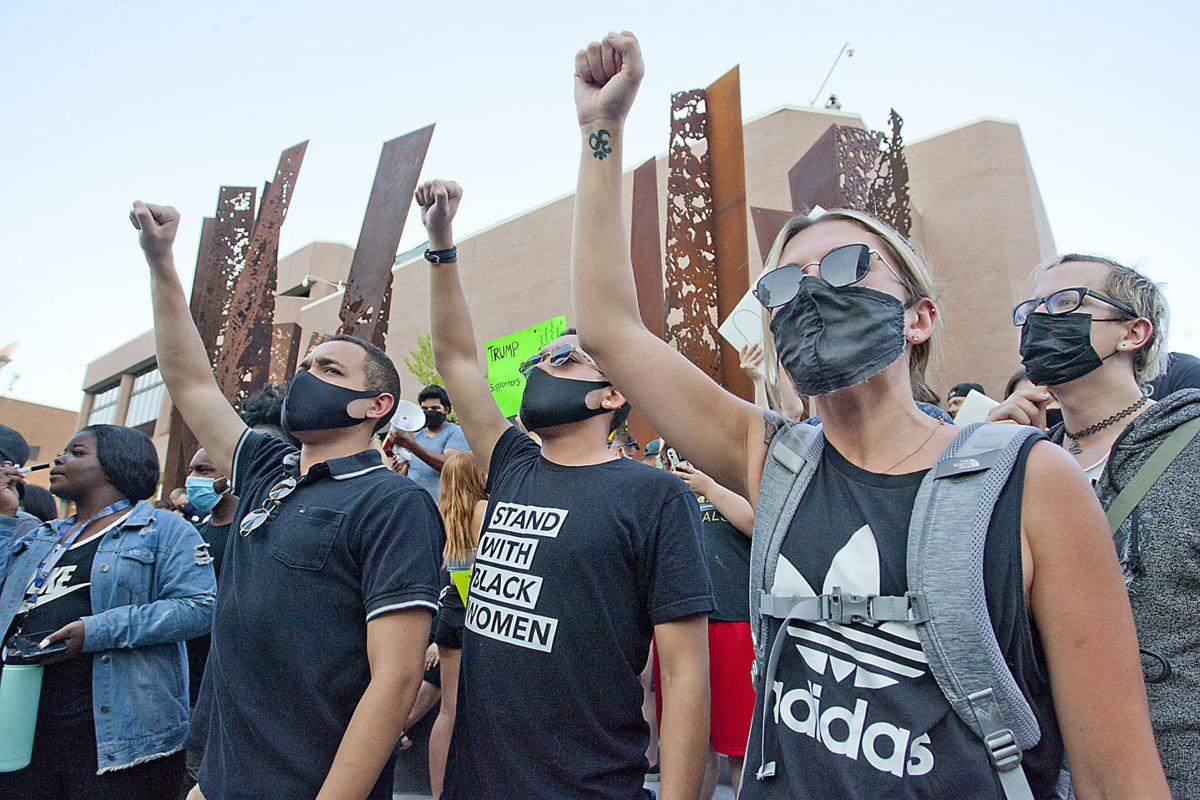 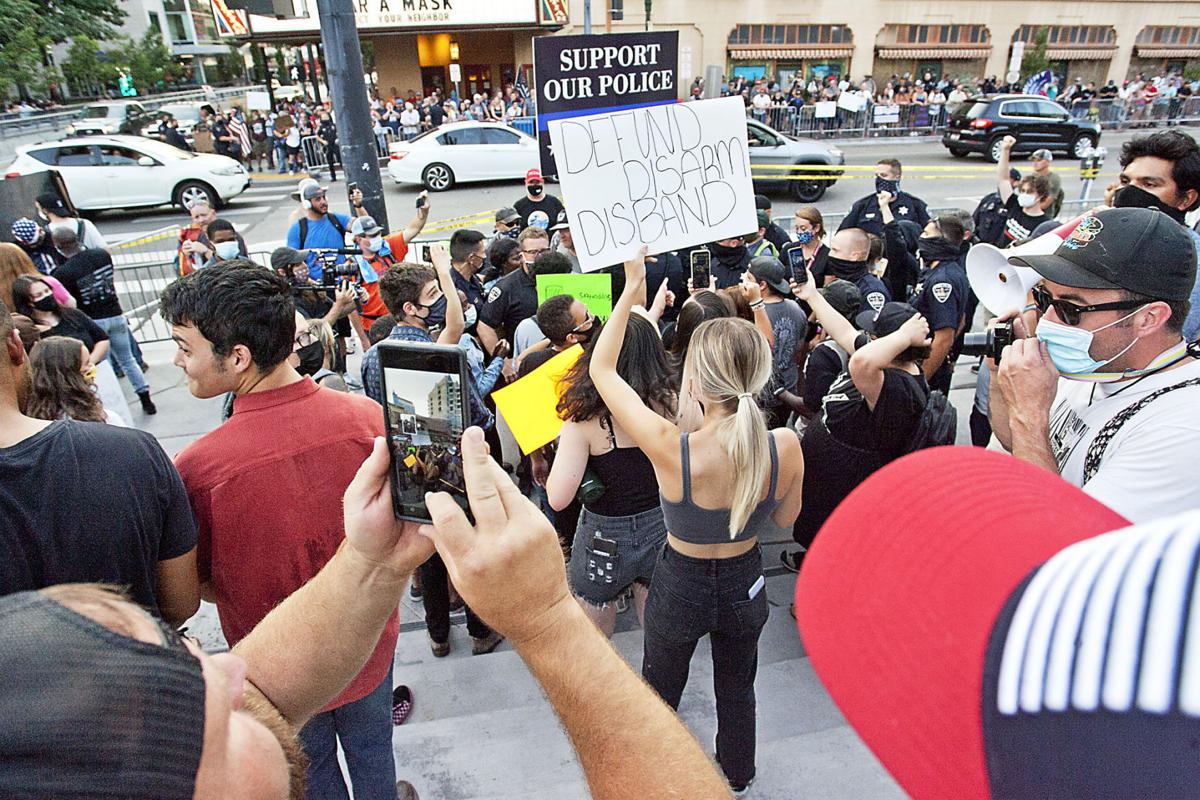 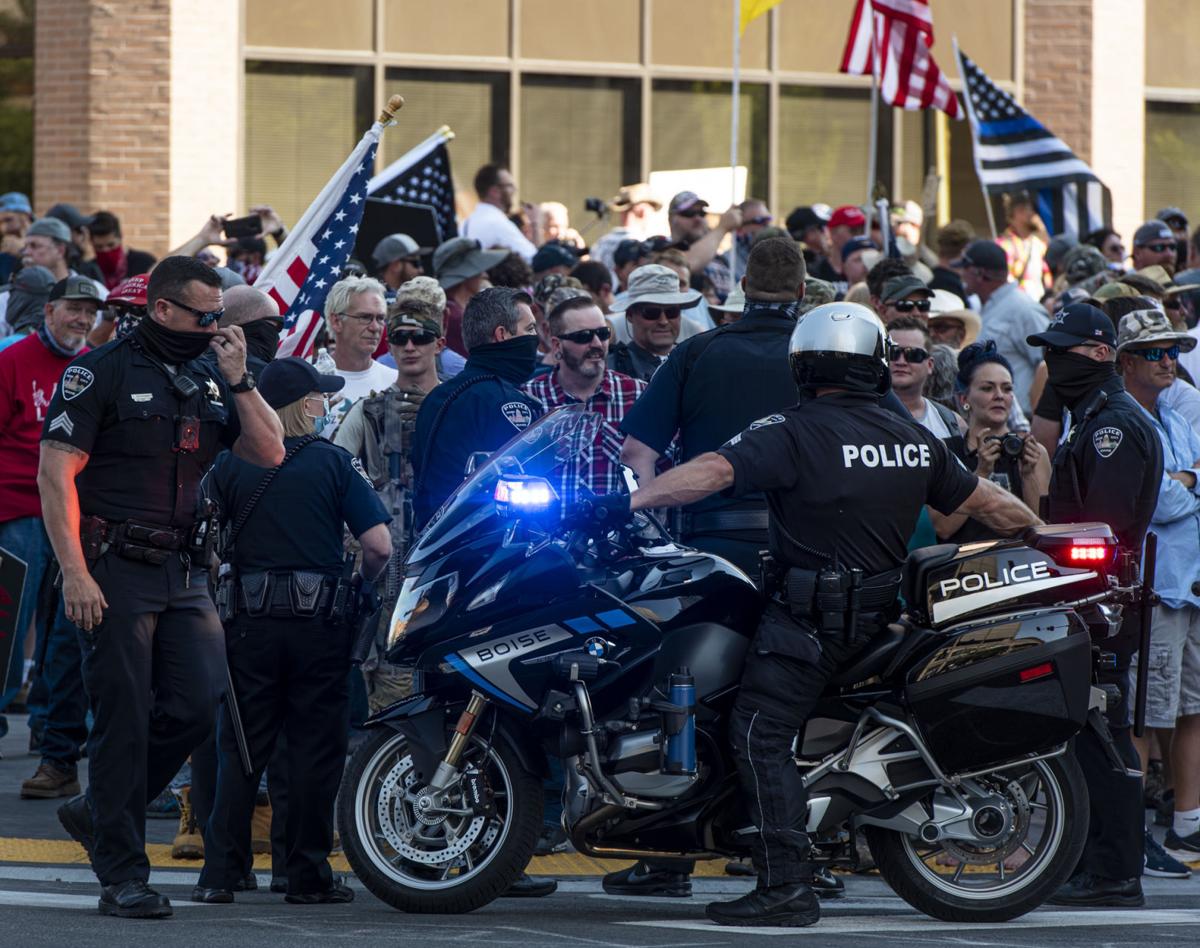 Boise police officers stand on the edge of a street corner to keep demonstrators confined to the sidewalks near Boise City Hall on Tuesday, July 21, 2020.

Boise police officers stand on the edge of a street corner to keep demonstrators confined to the sidewalks near Boise City Hall on Tuesday, July 21, 2020.

BOISE — Tuesday’s protests at Boise State University and Boise City Hall may have been largely nonviolent, but the Boise Police Department is investigating a report of a woman pointing a handgun at protesters.

It was perhaps the most serious incident police investigated Tuesday night. Overall the department appeared to take a different tact in policing the protest compared to its approach in the past.

All told, officers made one adult arrest, detained two juveniles, cited another, and are investigating two other incidents, according to a Wednesday news release from the department. One of those incidents involved a woman reportedly pointing a gun at people in the crowd, according to the release; that investigation has been sent to prosecutors, who may file charges.

“The police contacts for criminal behavior were all in the area around City Hall and involved participants from many different groups,” department spokeswoman Haley Williams wrote in an email to the Idaho Press.

The arrest came after Tristan Boicourt, 23, allegedly jumped over barricades marked with police tape. He was arrested on suspicion of resisting and obstructing officers, according to the release; an affidavit of probable cause for his arrest states the arrest was uneventful.

Officers also investigated the case of a juvenile reported to have committed a battery on someone else in the crowd, and routed the investigation to prosecutors, according to the release. Officers also cited one juvenile for consuming alcohol.

Despite threats of violence in the days leading up to Tuesday night’s protests — including some against Boise Mayor Lauren McLean — the night remained largely nonviolent. They featured two distinct groups: a gathering organized by Black Lives Matter Boise and another by the group Idaho Liberty Dogs, which was meant as a show of support for law enforcement, according to the group’s Facebook page.

Black Lives Matter Boise announced Monday it would move the location of its protest from Boise City Hall to another locale, but didn’t say where. The protest eventually took place on the campus of Boise State University.

The planned protests were largely uneventful. The two members of the two groups didn’t encounter each other until later in the night, and police management of those encounters was different on Tuesday night than during other protests.

Not long after 8 p.m., some Black Lives Matter demonstrators made their way to city hall where for at least the next two hours they stood on the northeast corner of Capitol Boulevard and Main Street and traded chants and shouts with those who attended the Idaho Liberty Dogs’ rally, who stood in front of the Egyptian Theatre on the other side of Capitol Boulevard. The group standing in front of city hall numbered roughly 50 people, while the crowd across the street was perhaps 200 strong.