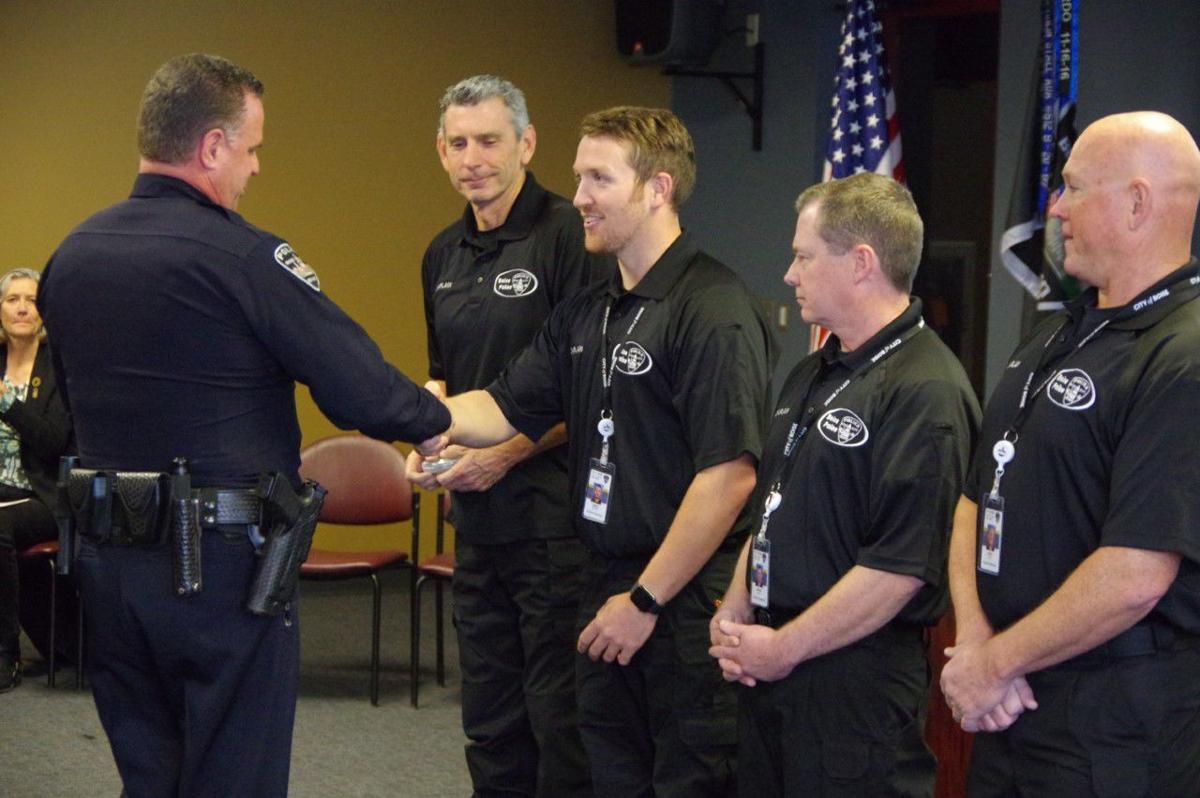 Boise’s volunteer police chaplains are sworn in during a December ceremony. The department now has six chaplains, the most in its history. 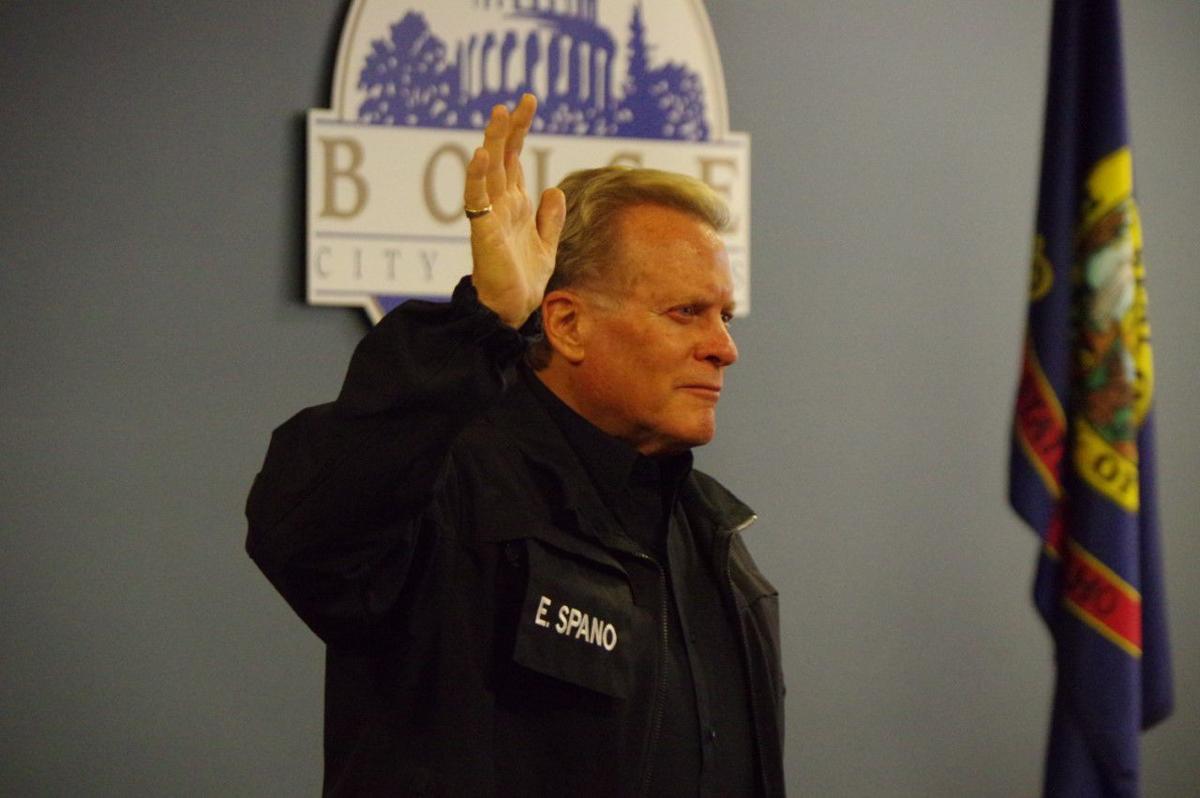 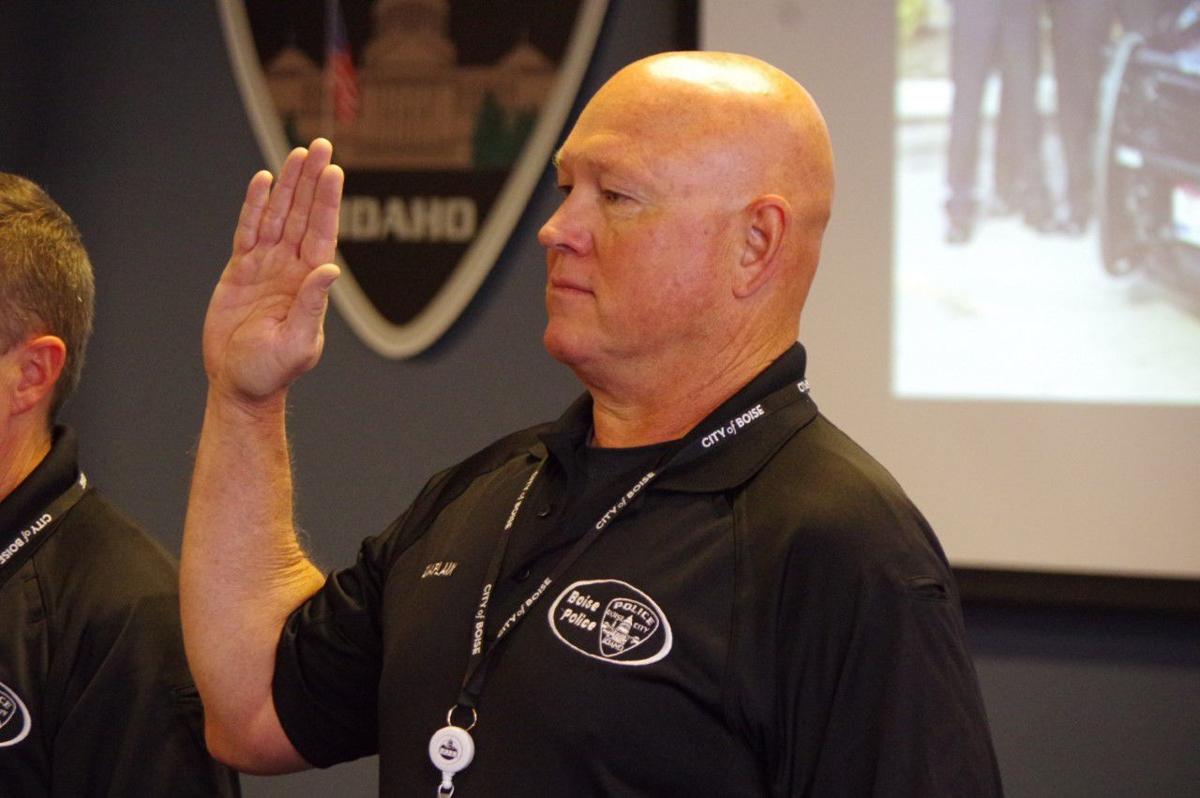 Boise’s volunteer police chaplains are sworn in during a December ceremony. The department now has six chaplains, the most in its history.

BOISE — As Arnold Rubey remembers it, in 2004, the Boise Police Department’s command staff approached him and said, “You’re our chaplain.”

The prospect of serving as the department’s chaplain perhaps wasn’t wholly unexpected — Rubey’s son-in-law, Boise Police Officer Mark Stall, had been shot and killed on duty in 1997 at age 29. Rubey had presided over Stall’s funeral service, and he’d been involved in an anniversary service in remembrance of Stall one year later. Rubey knew some of the officers and he had some involvement with the department, but he didn’t have a law enforcement background — he was a pastor at a non-denominational church in Boise.

The prospect of ministering to police officers, he said, was a bit intimidating at first.

“To be honest, I would have to say, yes — I was kind of intimidated by that because my role was with a whole different clientele of people,” Rubey said.

But the more he learned about the department, the more comfortable he became.

Rubey for over 10 years served as the department’s only chaplain. But in December, the department swore in four new volunteer chaplains. It now has a total of six — more than it has ever had.

For years now, first responders as a whole have been coming to terms with a work culture where openness about stress and coping mechanisms has, historically at least, been discouraged.

Yet officer resilience and wellness are currently major topics of discussion among first-responder leadership across the country, said Boise’s Deputy Police Chief Ron Winegar, who was also injured in the shooting that killed Stall.

For 12 years, Winegar has been involved in the department’s peer-support team, which aims to help officers manage the many stressors that come with the job, both on the clock and at home. He sees the role of chaplains in the Boise Police Department as an extension of that program.

“A lot of the job that we do is just listening,” said Ed Spano, another department chaplain who started in 2018. “Most people, I’ve found, in the years I’ve been a chaplain, most people, most officers, most anybody — they always have the answers. A lot of times they just like to talk. And once they talk about it, they’ll have an answer. Might not have known that they had it. And many times it doesn’t have anything to do with religion.”

Spano, an ordained Catholic deacon who has been a police chaplain for almost 20 years, is used to having to build trust and rapport with officers. He smiled as he remembered the first time he sat in on a police briefing in Brentwood, California, and the sergeant in the room asked who wanted a chaplain to ride along with them. Everyone looked away and no one offered at first, Spano remembered.

The first rule for police chaplains, Spano said, is not to proselytize, or try to convert anyone to a particular faith.

That’s not the goal of the chaplain program at all, Winegar said, nor would department leadership ever force an officer to bring a chaplain on a ride-along. Chaplains can discuss faith with officers, but only if the officers bring it up first.

“I’m not there to try to get anybody to go to my church or believe my way,” Spano said. “We’re secular in the nature of what we do.”

They’re still volunteers for the city of Boise and log their hours the way any other volunteer would. They’re vetted the same way police officers are. They’ve interviewed with department leadership and they’re sworn, just as officers are, which is why they’re able to sit in on police briefings. They will undergo the same training as those on the department’s peer-support team.

“Officers can discuss anything with them that is on their mind, it’s sort of an opening for them to talk through anything that is bothering them,” department spokeswoman Haley Williams said.

Interactions between chaplains and officers are confidential. Chaplains don’t report anything an officer says during a ride-along, Spano said. Rubey declined to share any specific anecdotes because he wanted to respect that confidential relationship.

Not every chaplain is ordained within their own church; Winegar said the department didn’t make that a requirement.

Steve Pace, who was sworn in as a Boise Police chaplain in December, was a police officer for 30 years in Fremont, California, not far from the Brentwood department where Spano worked; the two have known each other for decades. While Pace was baptized Lutheran, he isn’t an ordained faith leader — but faith played a strong role in his life as an officer.

“There were quite a few incidents on patrol where I felt that there were higher powers at work that helped steer me away from harm’s way,” Pace said.

Pace said he believes his background in law enforcement puts him in a unique position to work with officers and other employees of the Boise Police Department. He sees his role as more of a supportive one, rather than one of faith leadership.

Still, more often than not, Spano said his conversations with officers do turn back to “some point of spirituality.”

“They might ask a question, they want an answer,” he said. “They obviously know we’re chaplains. But we’re not there to pry.”

‘PUT THEM AT EASE’

Chaplains can also work with people who aren’t police. Spano said he specifically remembers speaking with a woman in California on the scene of her husband’s suicide, and talking to her on her front porch while police and coroners did their jobs.

But being a chaplain isn’t just about being present in crisis, Spano said.

“I’ve had people, officers ask them to just sit on the pavement while they’re checking things out, and I just go up and start chatting with them,” he said. “Our job is to put them at ease, to let them understand that this is just … it’s just an easy thing. They’re not being arrested.”

Rubey as well emphasized a slower, quieter approach to working with people as a police chaplain.

In his early days as a chaplain, Rubey learned that working with police officers was different from working with the general public. Police in general would tell him things were fine even if they were hurting. Officers didn’t always want to talk about their personal lives, but sometimes they did open up.

“Law enforcement personnel are people,” he said. “They have souls, they have feelings, they have emotions. While they’re taught to control themselves to a great degree, their needs are just like every other person on the face of the earth.”

Spano first started talking to Winegar two years ago even before he moved to Idaho about the possibility of setting up a chaplaincy program in the Boise Police Department. Spano had plans to retire to Eagle from California. For 17 years, he’d had a secular job and worked with the Brentwood Police Department in his spare time. When he retired he wanted to go into ministry full-time. He wanted police chaplaincy to be a part of that.

He found the Treasure Valley was short on police chaplains. In California, he was one of six chaplains for a department of 70 officers — far fewer than Boise’s roughly 300 sworn officers. The prospect of six chaplains amazed Winegar.

“So we talked about what that could look like here, if we brought the chaplain program under the umbrella of the peer-support team, and how that might look,” Winegar said. “And so we’ve just kind of gone from there and spearheaded that program, certainly in conjunction with Arnold.”

Spano began talking with people who said they were interested in the program. Among them was Pace who, like himself, had recently retired to the Treasure Valley from California.

“I’m always passionate towards law enforcement personnel, helping them out and supporting them, because I used to work with them and I know that they need that,” Pace said. “And Ed asked me if I’d be interested and I said, ‘Of course.’”

He feels he’s been well-received by the department as a new chaplain since his swearing-in.

Winegar said the department doesn’t have any immediate plans to add more chaplains. That might change in years to come.

The important thing to do, Pace said, is to let officers know they can trust chaplains.

“I think just having the officers open up to us, having that trust. … I think that’s huge,” he said. “And once you establish that trust base, they’re able to open up to you. And it expands how well we’re used, utilized, throughout the department.”