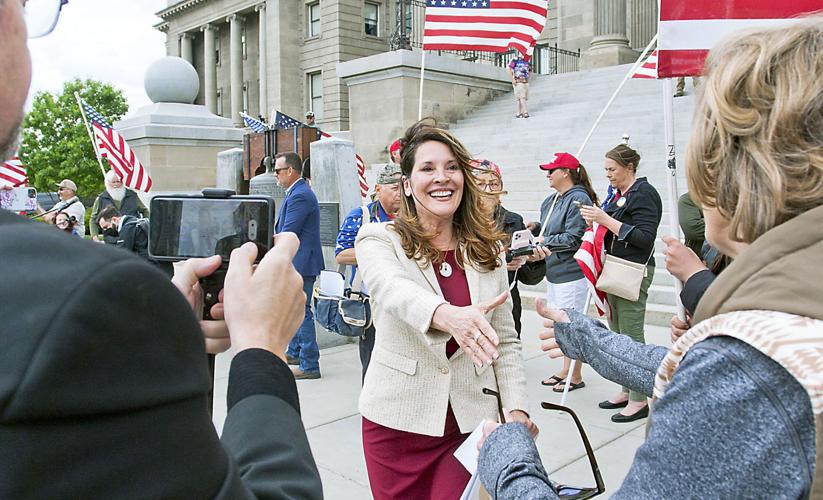 Lt. Gov. Janice McGeachin shakes hands after announcing her run for governor from the steps of the Idaho State Capitol on May 19. 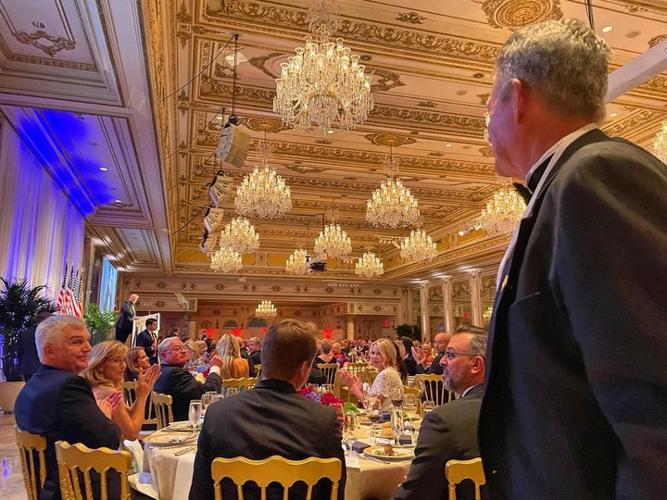 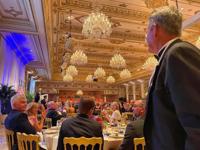 Gov. Brad Little, right, stands for applause as he’s recognized by former President Donald Trump from the podium at the “America First Policy Summit” gala at Mar-a-Lago in Florida on Nov. 4. 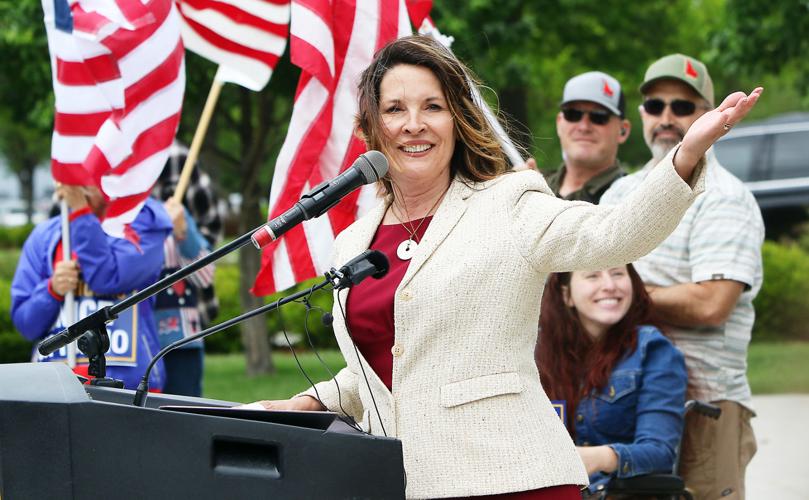 Lt. Gov. Janice McGeachin gestures to a crowd of supporters, gathered in front of the Idaho State Capitol building, as she announces her run for governor, Wednesday, May 19, 2021. 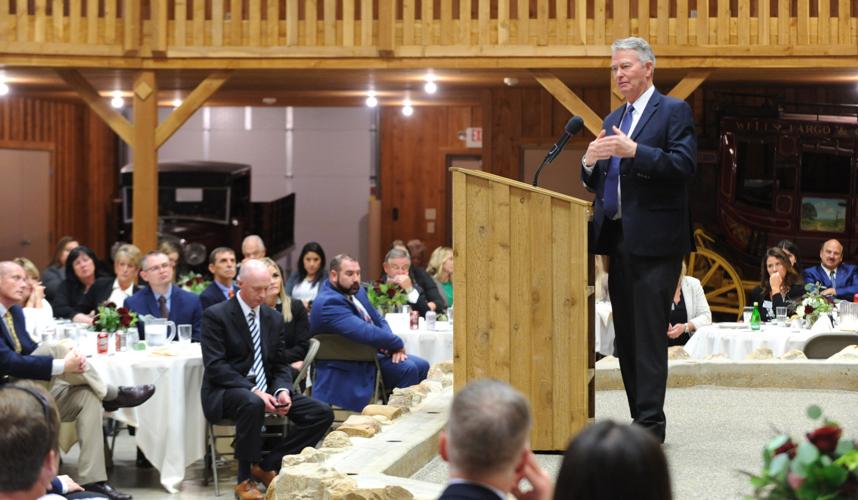 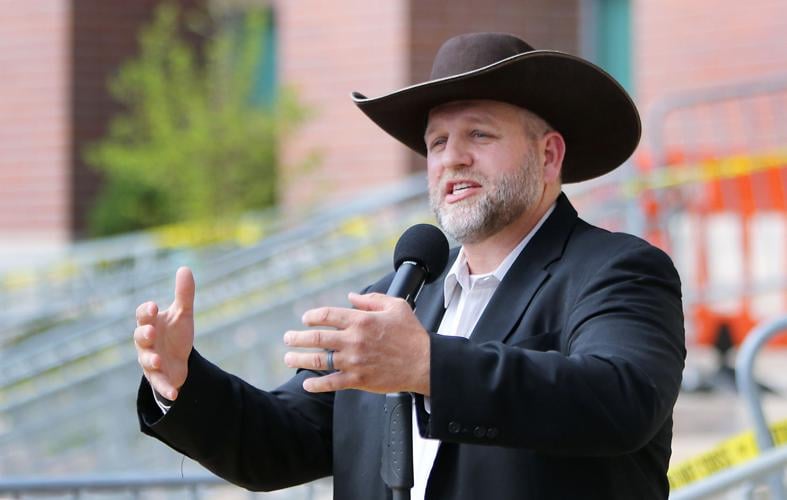 Ammon Bundy speaks during a protest in front of the Ada County Courthouse on April 3. 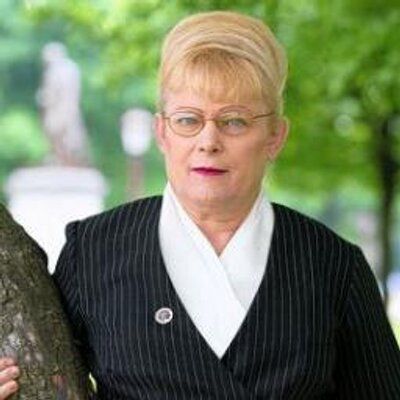 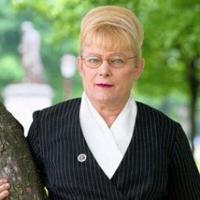 Lt. Gov. Janice McGeachin shakes hands after announcing her run for governor from the steps of the Idaho State Capitol on May 19.

Lt. Gov. Janice McGeachin gestures to a crowd of supporters, gathered in front of the Idaho State Capitol building, as she announces her run for governor, Wednesday, May 19, 2021.

BOISE — When Lt. Gov. Janice McGeachin, who is running for governor, held an event last week to “encourage conservative Republican legislators” to sign a Trump-issued education pledge, and then proclaimed the event’s success in an official press release from her office, was that governing or campaigning?

When Gov. Brad Little sent out a press release last week proclaiming that Idaho “tops lists for states with most freedom,” which was that? What about his trip to a gala dinner at Mar-A-Lago, at state taxpayer expense, where he was recognized by former President Trump?

The issue could come up again and again in the coming months, as two of the state’s top elected officials face off in a GOP primary for governor. And other candidates for office also are blurring lines between campaigning and other aims, from GOP gubernatorial hopeful Ammon Bundy’s claim that his campaign activities around the state should satisfy his court-ordered community service for a criminal conviction, to Democratic hopeful Melissa Sue Robinson’s online fund drive for $1,100 to repair her car.

Incumbent elected officials do have an advantage, in which carrying out the duties of their office can also indirectly benefit their campaigns, Kirk noted. Little’s press release, for example, which touted the results of the annual “Freedom in the 50 States” report from the Cato Institute, a Washington, D.C.-based libertarian think tank, including that “Idaho is a top 10 state for overall freedom,” didn’t cross the line, she said.

“The advantage always goes to the incumbent, in any office,” she said.

But Kirk said Little’s trip to Mar-a-Lago on the taxpayers’ dime almost certainly did cross the line, which the governor’s office disputes; and that anything he received from former President Donald Trump’s America First Policy Institute should be reported as a gift or campaign contribution. Little hasn’t yet announced his re-election plans, but has been fundraising for his campaign; Kirk said it doesn’t matter whether or not he’s announced.

McGeachin’s event, for which invitations stated, “This is not a campaign event,” also raised ethical questions, Kirk said.

The GOP lieutenant governor, in her official press release last week, said she “gathered together over 125 statewide candidates, lawmakers, city officials, school board members, and patriot citizens to the Powderhaus Brewery in Garden City,” where attendees were urged to sign former President Donald Trump’s “1776 Pledge to Save Our Schools.”

During the event, Trump made a surprise appearance via video, and lauded both the event and McGeachin’s run for governor. “As you know, we’re not big for critical race theory and all of the other things that they’re trying to foster upon us in the schools and school systems throughout our country,” Trump said, “we’re about 1776, we’re about making America great again, America first and so many other things.”

Trump also touted his “big victory” in Idaho in the 2020 election, and called McGeachin “a tremendous supporter.”

“Thank you to Janice and good luck in your run,” Trump said in the video.

McGeachin urged her supporters to invite local elected school board members and other candidates and officials to the event; the price of admission was $40, which included “two beers/glasses of wine and food.” Any proceeds beyond the cost of the event would go to Toys for Tots, she promised.

In her news release, she said $1,300 was raised for Toys for Tots at the event, which also included speeches from McGeachin and several supporters who invoked religion and decried alleged indoctrination of children in public schools through teaching of critical race theory, which Idaho’s State Board of Education has found isn’t taught in Idaho schools.

McGeachin touted her education indoctrination task force, which met four times. Another speaker warned, “Evil is lurking in the halls of our educational system,” and said, “We can take back our country and bring back the family.”

According to McGeachin’s chief of staff, Jordan Watters, 26 Idahoans had signed the 1776 Pledge before the event, and another 25 signatures were collected at the Powderhaus event.

The “1776 Pledge to Save Our Schools” includes the statement, “Teaching children to hate their country and each other is immoral and deeply harmful to our society and must be stopped,” and pledges to “restore honest, patriotic education that cultivates in our children a profound love for our country.”

In his final months as president, Trump established the “1776 Commission” and it issued a report critical of teachings about race and U.S. history in the nation’s public schools; President Joe Biden abolished the commission when he took office in January. A Trump-affiliated political action committee called “1776 Action” has been pushing the pledge.

The invitation to McGeachin’s event said the signed pledges “will be sent to President Trump to demonstrate which legislators support the ‘America First’ agenda in Idaho.”

Kirk said there’s no ethical problem with an elected official hosting a charity fundraiser. “There’s absolutely no problem with her doing that,” she said. “There’s a problem with her using her office to disseminate information about a personal or campaign event that’s not related to the duties of your office.”

The duties of Idaho’s lieutenant governor include presiding over the Senate, filling in as acting governor, and other duties as assigned by the governor. Overseeing education is not part of the lieutenant governor’s official role, as defined by either the Idaho Constitution or state law.

The official duties of the governor, on the other hand, are much broader. They include holding the supreme executive power in the state, issuing executive orders that have the force and effect of law, and commanding the military forces, among other duties.

Asked how the event related to McGeachin’s official duties as lieutenant governor, Watters said in an email, “The lieutenant governor has been a leader on this issue for months now. As you well know, she formed an education task force to address it, and the 1776 commission is a continuation in the fight to save Idaho’s education alongside the former president.”

Kirk noted that the proceeds from the Powderhaus event, including the bar and food tab, appear to have far exceeded the amount raised for charity. At $40 per person, 125 attendees would have paid $5,000. However, a volunteer who worked the check-in desk said only about 80 people paid; the remainder attending included people already at the Powderhaus who migrated over to watch the presentations. That would put the total take around $3,200.

Travis Manning, a second-term Caldwell school board member and vice chair of the school board, declined to attend, and called the pitch to school board members inappropriate. He expressed concern “that the lieutenant governor and her supporters would advocate for nonpartisan officials to attend a clearly partisan event.”

Kirk said while it’s fine for an elected official on their own time to participate in an event aimed solely at their political supporters, that’s not the case for an official state-sanctioned event, which the lieutenant governor’s office made clear in its press release was how the Powderhaus event was treated.

“Her duty is to represent all the people of the state,” Kirk said, “It’s not that I can just represent ‘my people.’”

Watters said no taxpayer funds were spent on the Powderhaus event, but that doesn’t account for the press release or his time. “Don’t put it on your letterhead,” Kirk said. “Don’t make it sound like a state event.”

Boise State University political scientist Jaclyn Kettler said, “I think this is one of those cases where it does start to get trickier to try to figure out what is acceptable and what isn’t. It seems like there may be some concerns.”

The issue, she said, may “represent broader questions we might have about campaigning and rules and laws moving forward.”

Kettler noted that there’s some electoral risk for an incumbent who blurs the lines between governing and campaigning. “If you look like you’re only campaigning and not actually governing, there could be some backlash and citizens could get unhappy,” she said.

As for Bundy’s claim that his campaign activities should satisfy his criminal sentence to community service, she declined to comment. “I think he stands all on his own,” she said.

Democratic gubernatorial hopeful Melissa Sue Robinson’s online fund drive to fix her car is less problematic, Kirk said. In a Facebook post the same week as McGeachin’s Powderhaus event, Robinson put out a plea, without mentioning her run for office, for “$1,100 for car repair that needs to be done immediately or no transportation.”

“I need the car for doctors appointments, grocery shopping etc. as I am 71 years old,” she wrote on Dec. 1. By the week’s end, she had received three donations totaling $91.

“She hasn’t done anything really wrong yet,” Kirk said, noting that “it shouldn’t be a requirement that you have to be wealthy and be able to afford car repairs” in order to run for office.

But if donors then sought to influence her as a candidate or office-holder, Kirk said, “Is she going to feel beholden?”

“There’s room for sunshine there, let’s just put it that way, and to announce who actually gives her money to fix her car,” Kirk said. “But we hope she gets her car fixed.”

Also among the announced candidates for governor in 2022 so far are Democrats Shelby Rognstad, the current mayor of Sandpoint; and Robert Dempsay of Paul; and Republicans Ed Humphreys of Eagle, Steve Bradshaw of Cocolalla and Lisa Marie of Eagle. Others who have filed preliminary paperwork for possible runs include Republicans Cody Usabel and Jeff Cotton; Constitution Party hopefuls Pro-Life and Chantyrose Davison; and unaffiliated candidate John Dionne.

This story has been updated to reflect additional information on paid attendance at the Powderhaus event.