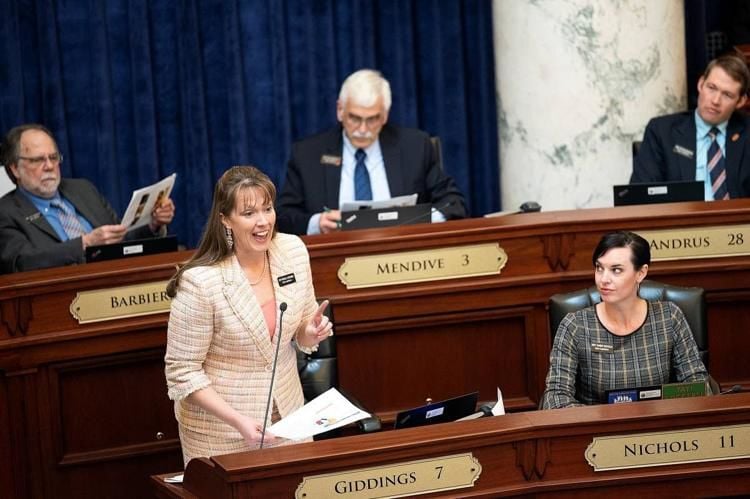 Priscilla Giddings, R-White Bird, debates against a House bill that would appropriate $6 million in federal funding for early childhood education Tuesday morning, March 2, 2021, at the Idaho Capitol Building in Boise. The measure ended up being defeated. 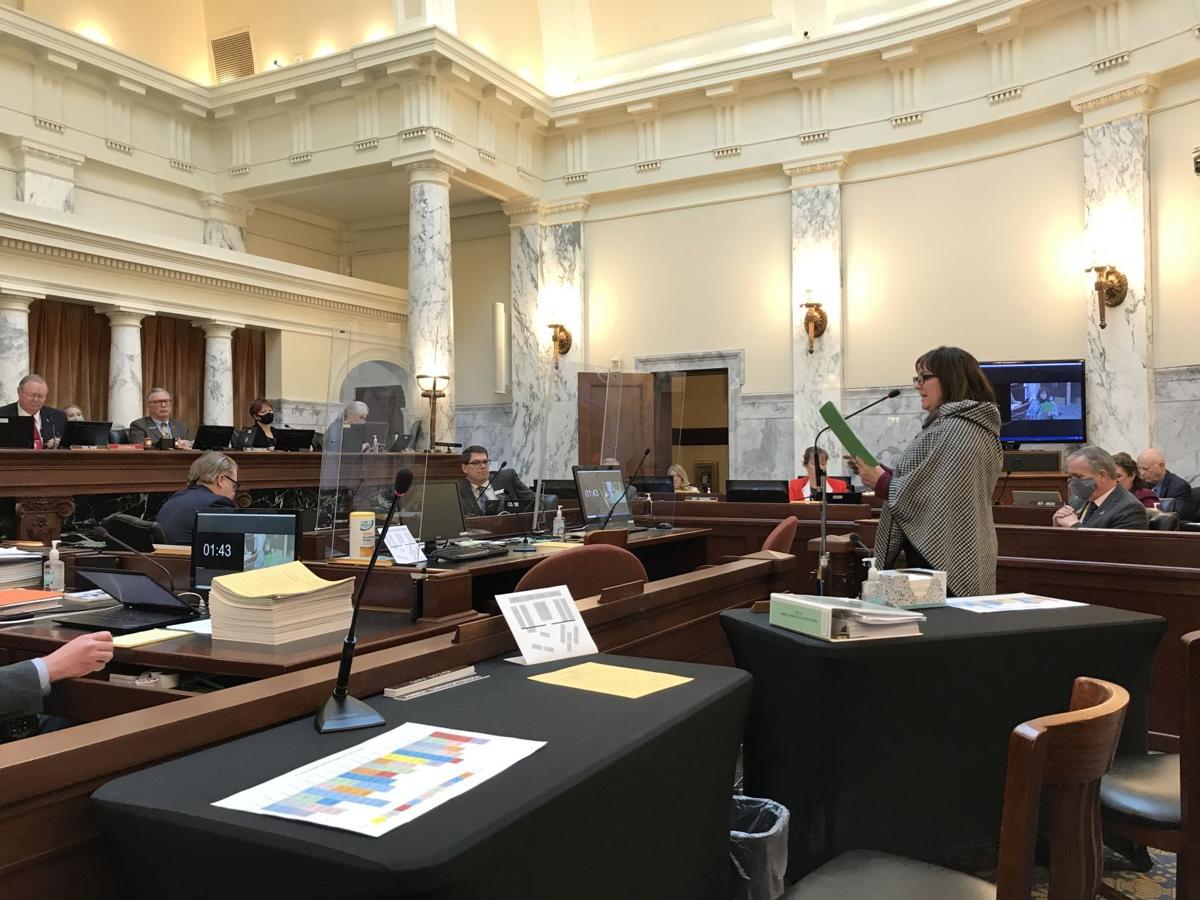 Tina DeBoer of Nampa testifies in favor of HB 153, a proposal to split the higher education budget into four pieces, at the Legislature’s Joint Finance-Appropriations Committee on Friday, March 5, 2021. 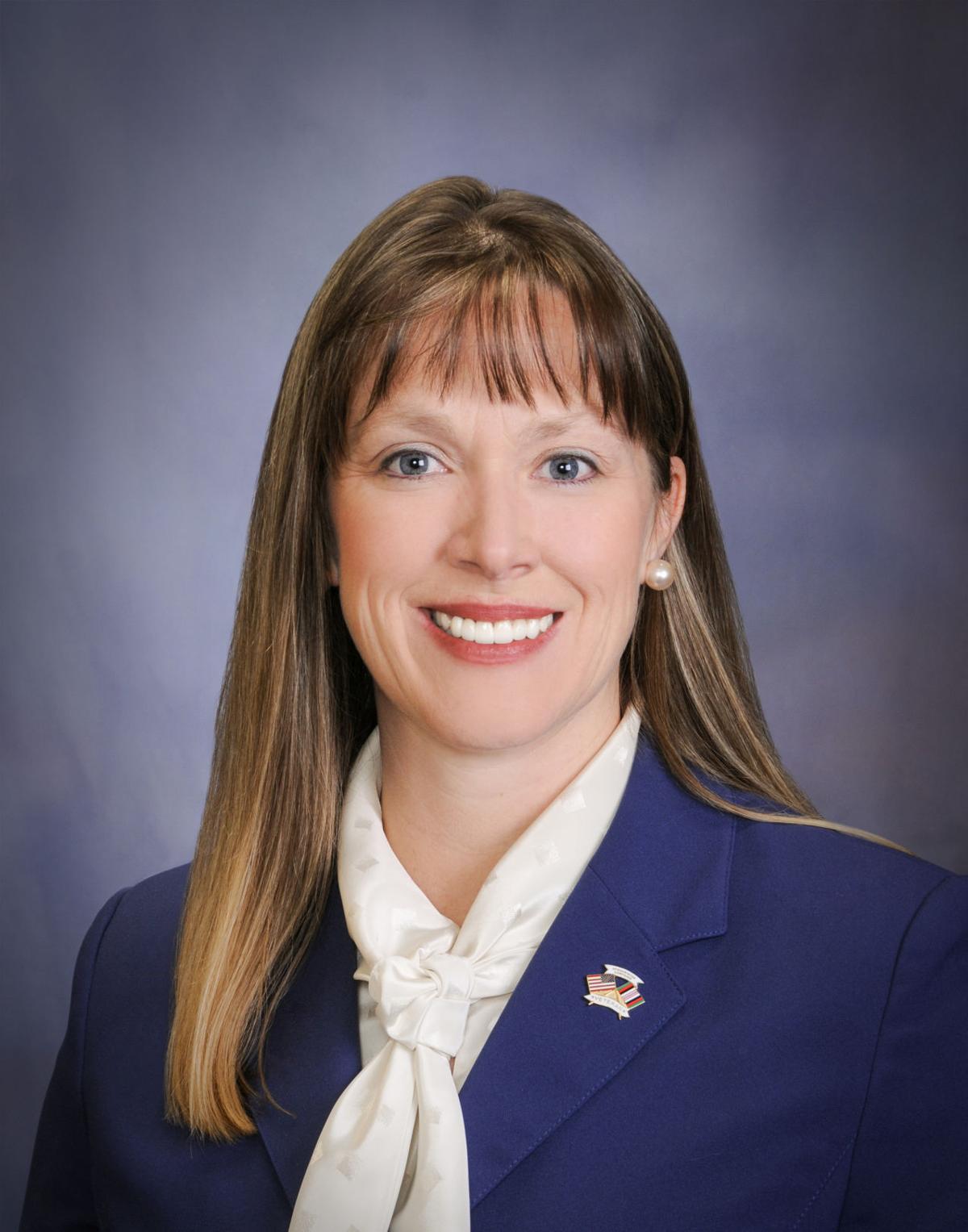 Priscilla Giddings, R-White Bird, debates against a House bill that would appropriate $6 million in federal funding for early childhood education Tuesday morning, March 2, 2021, at the Idaho Capitol Building in Boise. The measure ended up being defeated.

Tina DeBoer of Nampa testifies in favor of HB 153, a proposal to split the higher education budget into four pieces, at the Legislature’s Joint Finance-Appropriations Committee on Friday, March 5, 2021.

BOISE — Rep. Priscilla Giddings’ bill to divide the state’s higher education budget into four separate pieces for the four universities died on a 17-3 vote in the Joint Finance-Appropriations Committee on Friday. The bill was opposed by Idaho’s university presidents, and supported by the Idaho Freedom Foundation and an array of citizens who cited concerns about communism, indoctrination, “social justice ideology”, and accountability.

Brian Stutzman of Ammon told the joint committee, “I wonder how much cheaper for taxpayers college would be if the universities went back to focusing only on education and not indoctrination.”

Anna Miller of the Idaho Freedom Foundation charged that Idaho’s public universities are pushing “service learning,” which she said is rooted in “radical pedagogy” and “a strong demarker of social justice education.”

Rep. Caroline Nilsson Troy, R-Genesee, vice-chair of the joint committee, countered that she was working at the University of Idaho when it expanded service learning, which includes volunteer work.

“Some of the things I can remember happening is they started an alternative spring break,” Troy said. As part of that, she said, 30 students, including Troy’s daughter, helped rebuild families’ homes that were destroyed in Hurricane Katrina. The programs also included “volunteer work for Habitat for Humanity, helping raise money for local non-profits, for the food bank. … I think it’s really important that we clarify areas that we’re particularly concerned about from other areas that are actually great for our students to engage in while they’re in college.”

Miller responded that while service learning could include “mundane” things, “the goal is to acclimate students to get used to activism, specifically progressive activism.”

Del Chapel of Nampa said, “I’m sure you guys are all aware this is different this year, everything’s different. We know it’s about COVID, but this is a bigger agenda that’s going on. … I believe that the Communists have taken our country. … We’re counting on you guys as conservative Republicans.”

Tina DeBoer of Nampa said, “With this bill, what I see is sort of the elites vs. the people, the average Joe out there. What we’re asking you here is really to say no to the elites. … Hold these institutions individually accountable.”

Giddings, R-White Bird, said of her bill, HB 153, “I think this legislation could be helpful to us here in Idaho.” She said, “Each of these institutions has a unique mission. … They serve different community needs, and each budgetary requirement is very different.”

Matt Freeman, executive director of the state Board of Education, said, “We are a single system, we are a single board over four institutions. The thought of a single appropriation is it protects against parochialism, so that one institution isn’t favored over another.”

“We don’t believe the bill is necessary and we don’t believe it’s a good policy decision at this point,” he said. “Since statehood, for the last 130 years, the Legislature has appropriated the higher education budget to a single entity, from the time when there was only one state university up until now.”

He noted that the state Board of Education is “the single constitutional entity that supervises Idaho’s higher education system.” He also noted that the Legislature already can direct funds to one institution or another, as it did earlier this week when it set the higher education budget and shifted $409,000 from Boise State University to Lewis-Clark State College.

“There’s no need by statute to do what the Legislature already does every year anyway,” he said. He said the universities are focused on “working together, rather than separately in competition.”

Sen. Janie Ward-Engelking, D-Boise, said, “I’ve received hundreds of emails regarding this bill and I feel obligated to make a few comments. … Universities should be a place where diverse ideas are talked about and explored. And I’m sorry to see these kind of attacks on our universities, because this year in particular, they stayed open, they made sure our children had an in-person experience, and that didn’t happen all over the nation. I just feel like the attacks I’m hearing are a little bit out of place and unjustified right now.”

Questioned by committee members, legislative budget director Paul Headlee said the Legislature sets budgets at the division or higher level, and each division can include multiple programs. The four universities are programs; they’re all part of one division. Idaho has 250 budgeted programs, he said.

JFAC Co-Chair Rick Youngblood, R-Nampa, said, “If we start splitting budgets … we could have a practice of over 200 budgets. And that’s my concern. … Are we going to split the community college budgets? Are we going to … start separating and pulling school districts?”

Several JFAC members said the issues raised in the hearing were about policy, not about budgeting, which is the province of the joint budget committee.

“To what granularity do we want to set budgets?” asked Sen. Jim Woodward, R-Sagle. “I think we’re in a good spot right now.”

The only three committee members who voted in favor of the bill were Giddings and Reps. Ron Nate, R-Rexburg, and Wendy Horman, R-Idaho Falls.