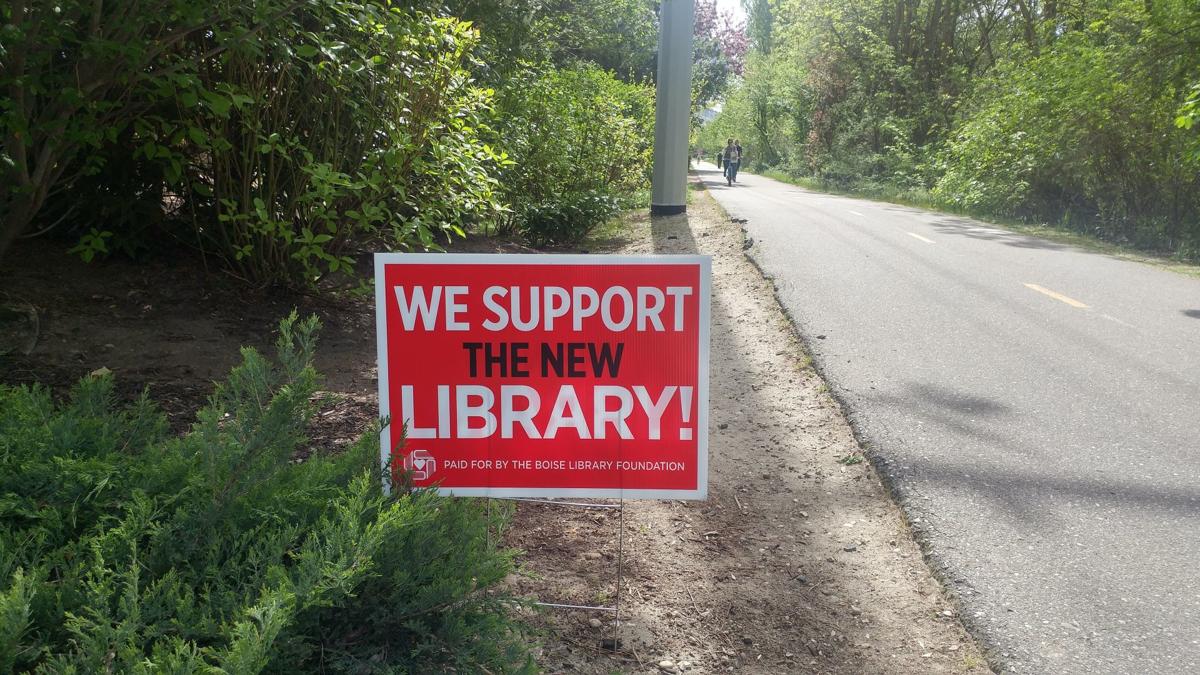 A sign in May near the greenbelt in East Boise shows support for a new Main Library. City staff in December said Proposition 1, which voters passed on Nov. 5 to require a public vote on library projects over $25 million, halts future progress on the Main Library project.

A sign in May near the greenbelt in East Boise shows support for a new Main Library. City staff in December said Proposition 1, which voters passed on Nov. 5 to require a public vote on library projects over $25 million, halts future progress on the Main Library project.

BOISE — A campaign finance investigation into the Idaho Freedom Foundation’s support for the signature-gathering effort on the proposed main library and sports park projects has cleared the libertarian group of any wrongdoing.

On March 28, A.K. Lienhart-Minnick, former chairwoman of the Idaho Democratic Party and wife of former U.S. Rep. Walt Minnick, D-Idaho, filed a complaint alleging Idaho Freedom Foundation violated Idaho’s Sunshine Law by supporting citizens group Boise Working Together. The group formed at the end of 2018 to create ballot initiatives asking voters if they would like to vote on any city projects to build a main library or sports park, and was ultimately successful.

To complete the investigation, the Boise City Clerk’s Office hired former Idaho U.S. District Attorney Wendy Olson for $4,034. She found that, despite the fact that Idaho Freedom Foundation has some overlap with Boise Working Together in its posts, there were enough significant differences in their views that they were not in coordination. Olson concluded that Idaho Freedom Foundation has long been posting in opposition of the library project, which is different from Boise Working Together’s stated goal of having a vote on the project.

“Although IFF and BWT have a common interest in Boise City officials not being able to authorize spending public funds on the library and stadium projects, IFF’s policy position is a broader opposition to such public spending generally and was formed earlier,” Olson wrote in her report. “BWT’s ballot initiatives have a narrower focus, to prohibit such spending absent voter authorization.”

The connection between the two groups has been a topic of contention since earlier this year. In April, the political action committee Protect Our Libraries sprang up to counter Boise Working Together’s campaign to put the main library to a vote, and encouraged voters not to sign. A major part of this group’s messaging claimed Boise Working Together was connected to Idaho Freedom Foundation and out-of-state conservative political interests.

When asked if Idaho Freedom Foundation was supporting Boise Working Together financially earlier this year, both groups vehemently denied claims of financial support.

Idaho Freedom Foundation spokesman Dustin Hurst said his group has been working in an “educational” capacity to share what it views as overreach by the government on urban renewal and it was not in direct support of the signature-gathering effort.

Protect Our Libraries initially did not report any of the PAC’s donors or who started it. Mayor Dave Bieter told the Idaho Press last month he was one of the group’s founders and donated $1,000 from his own PAC to the effort. Bieter said Protect Our Libraries never claimed the Idaho Freedom Foundation was directly supporting Boise Working Together.

At one point, Idaho Freedom Foundation said it declined to assist Boise Working Together after the group asked for publicity, according to Olson’s report.

Another aspect of the investigation included a sponsored poll Idaho Freedom Foundation created on Facebook asking users if they thought the library was too expensive. In order to answer the poll, users had to supply their name and email addresses. Lienhart-Minnick alleged the names of those who answered the poll were provided to Boise Working Together; Idaho Freedom Foundation says this was not true.

In order for Idaho Freedom Foundation to be required to register as a political committee, Olson said it would have to spend over $1,000 in support of Boise Working Together. She said the one Facebook post, which would have been posted by Hurst, could not have cost anywhere near $1,000 of Idaho Freedom Foundation staff time. She also pointed out that even if the sponsored poll related to the library was directly related to Boise Working Together’s efforts, it did not cost more than $500 to create, according to Facebook’s records.

“We repost newspaper articles, entries from other Facebook groups, and Boise events,” she said. “That reposting does not establish a connection with any of these groups. The claim that reposting a Facebook entry establishes a connection between us and another organization is an unsubstantiated claim, and against the entire premise of social media.”