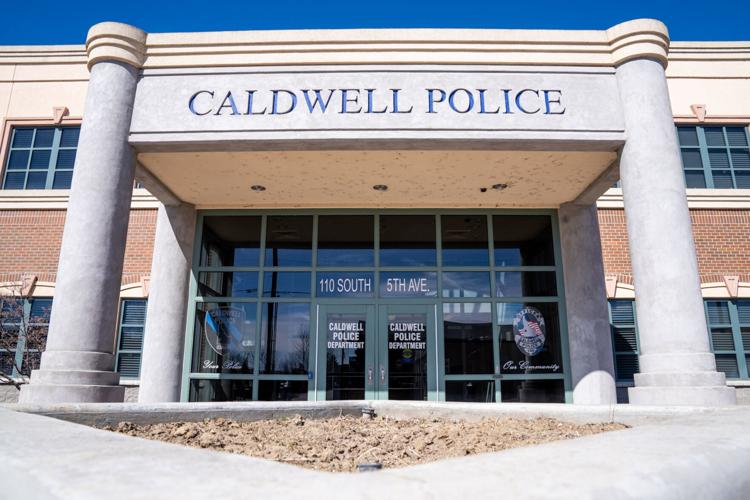 The entrance of the Caldwell Police Department. 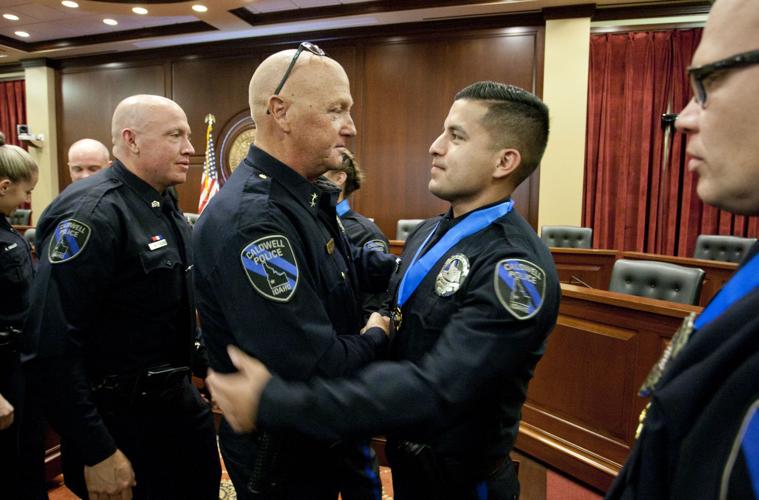 Caldwell Police Chief Frank Wyant congratulates an officer on being presented the Idaho Medal of Honor during a ceremony in the Lincoln Auditorium at the Idaho State Capitol in August 2021. The Caldwell Police Department is under FBI investigation for what sources have said involve alleged sexual relations that one or more officers had while on duty, as well as the treatment of suspects in alleged drug crimes.

CALDWELL — The misconduct of current and former officers working for the Caldwell Police Department’s Street Crimes Unit has been the subject of an FBI investigation, according to six sources familiar with the matter.

The police misconduct being investigated appears to center on alleged sexual relations that one officer had while on duty, as well as the treatment of suspects in alleged drug crimes, sources have said. It involves criminal and civil components, two sources said. The investigation may also be looking at employees who were knowledgeable about those alleged incidents, a retired law enforcement officer said.

The investigation has been going on for over a year, four sources have said.

Most sources that have spoken with the Idaho Press and KTVB have asked for anonymity due to the sensitive nature of the investigation.

One anonymous alleged victim, who said she has been talking to the FBI for more than a year, said that she had sexual relations with one of the officers allegedly under investigation. She said they had sex while he was on duty, and she was on drugs.

"He traded sex for me not to go to jail, and then he took the drugs," the 32-year-old woman said. "When someone is on drugs and vulnerable, like, he used a lot of that and his badge to get what he wanted and it's put me in a lot of danger, actually."

Following news reports about the investigation last week, Caldwell officials released a statement confirming the investigation, describing it as “ongoing,” as previously reported by the Idaho Press and KTVB. In response to social media speculation about the standing of Caldwell’s Chief of Police, Frank Wyant, the statement said that the chief is not the subject of the FBI’s investigation and that he remains “an employee in good standing.”

The FBI declined to confirm the existence of the investigation, as previously reported.

Former Caldwell Mayor Garret Nancolas, who retired from the position in January after more than two decades in office, did not immediately return requests for comment.

Current law enforcement leaders, including Nampa Police Chief Joe Huff and Canyon County Sheriff Kieran Donahue, confirm it is standard practice during investigations of this nature to put those being investigated on administrative leave. Caldwell Mayor Jarom Wagoner told KTVB in an email Monday that he has not asked any staff to “step down, resign, quit, or take a leave of absence at this time.” This includes Wyant and Caldwell Police Captain Devin Riley, he said.

A records request showed that Riley submitted his resignation letter to the department on March 10, stating his last day would be April 1, 2022. The first sentence or phrase in the letter is redacted.

Lieutenant Dave Wright confirmed that he is serving in a chief-like role, including taking on some of the chief’s responsibilities, such as answering questions from the media and public.

It is unclear whether the officers involved in the FBI investigation were or are placed on administrative leave.

It is not known if any of the employees left the department due to the investigation.

“I’ve appreciated the family like (sic) atmosphere, and have nothing negative to say about my time and experiences,” a portion of Branstetter’s letter says. “My heart is no longer in it, and I feel it’s appropriate to walk away.”

“It is with deep sadness that I am writing this letter which will serve a (sic) formal notification of my decision to resign from the Caldwell Police Department, effective November 7, 2021,” Bendawald said in his letter. The next portion is redacted, and Bendawald concludes by saying, “I wish you and the rest of the Caldwell Police Department nothing but the best, and I thank you for the opportunity to serve this community.”

“Its (sic) hard to write this but I don't think I can continue with Caldwell PD,” Rojo said in his letter. The next portion of the letter is redacted, followed by, “I wish things could be different as I was very excited for this opportunity. Please let me know how I need to move forward and I hope you can take these things into consideration for future applicants.”

AN ALLEGED PATTERN OF WRONGDOING

Following a Caldwell Police Department raid on her home in 2009, Caldwell resident Anna Banda sued the department, and won. She claimed she was a victim of targeting by the department due to her work as a bail bond agent, bonding individuals out of jail who the police had arrested.

Banda recalls feeling surprised when FBI investigators reached out to her in the winter of 2021, asking if she knew any specifics about wrongdoings within the police department. But she did not find the investigation itself surprising.

“I’ve seen a lot of … what I feel was police misconduct,” Banda said, such as, “a lot of officers being excessive with traffic stops, asking to search people’s vehicles who were not being arrested.”

Caldwell-based attorney Scott Larsen is currently representing Banda in another case. Larsen has represented a number of clients who have attempted to challenge alleged wrongful behavior within the Caldwell Police Department. One of his current clients has been involved with the FBI investigation, he said. Historically, the names of a few officers are mentioned in connection to a case, and sometimes, all of them at once, he said.

Yet complaints about wrongdoing at the department often fall “on deaf ears,” he said. However, he does not think the behavior reflects on all law enforcement professionals.

“This is such a small minority … it’s a small group of an inner circle who do things their way,” Larsen said. “They’re thuggish things.”

Larsen hopes the investigation “leads to an entire cultural shift” at the department, adding that he thinks some individuals should be prosecuted.

Two Caldwell Police Department officers, Baltazar Garza and Casey McGrew, were decertified in 2020 for “inappropriate sexual conduct while on duty,” according to a database compiled by the Idaho Statesman. The database spans 2002 to 2020, and was built by requesting records from the Peace Officer Standards and Training Council (POST), which certifies and can decertify officers from a variety of law enforcement entities, including city departments, the Statesman reported.

Decertified officers are ineligible for recertification for at least 10 years, according to the Statesman.

Editor's note: This article has been updated to reflect additional detail about the number and types of sources who provided information for this article.

This article was reported, written, and produced in partnership with KTVB, a story-sharing partner of the Idaho Press. For additional coverage of this story, tune into Channel 7 tonight at 10 p.m.

CALDWELL — The Caldwell Police Department is under investigation by the FBI, according to two sources who are familiar with the investigation.