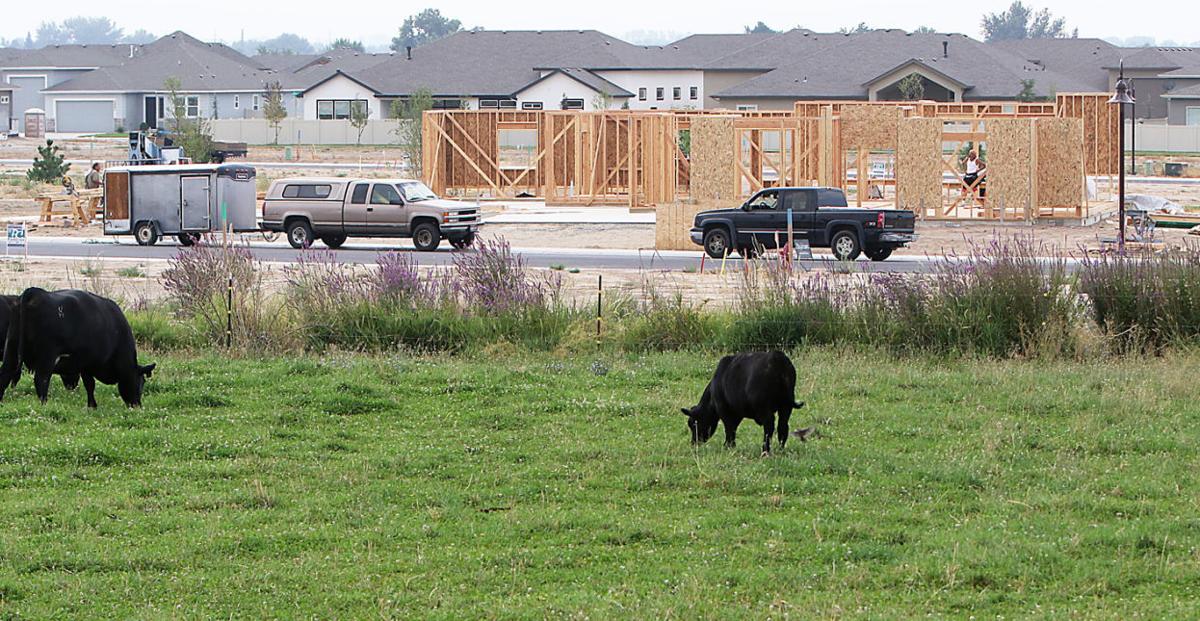 Construction work continues on a new subdivision in Star as cattle graze in a nearby pasture, Thursday, Aug. 29. 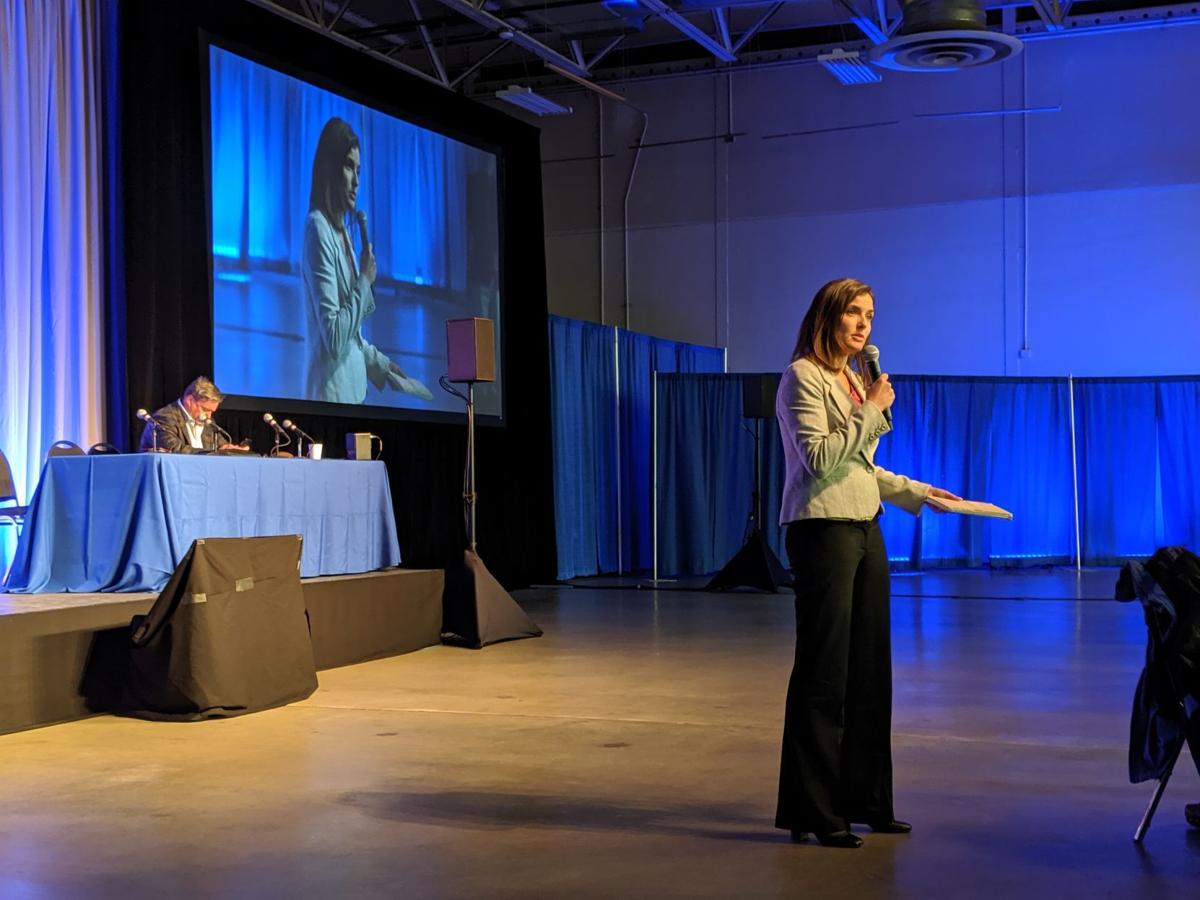 Ada County Commissioner Diana Lachiondo speaks to a crowd at Expo Idaho Wednesday at the county-led Growth Conversation, which brought together stakeholders and residents to discuss strategies for smart growth.

Construction work continues on a new subdivision in Star as cattle graze in a nearby pasture, Thursday, Aug. 29.

Ada County Commissioner Diana Lachiondo speaks to a crowd at Expo Idaho Wednesday at the county-led Growth Conversation, which brought together stakeholders and residents to discuss strategies for smart growth.

BOISE — As massive amounts of people continue to move to Ada County and population projections skyrocket, the county government is asking the public for input on how to deal with changes in the Treasure Valley.

Over 100 people attended an Ada County-planned Growth Conversation on Wednesday night at Expo Idaho. They listened and responded to national experts, Ada County government employees and Boise State University professors who spoke about how the Treasure Valley and Ada County in particular have challenged planning in recent years.

Jeffrey Lyons, a BSU School of Public Service professor, delved into the 2019 Treasure Valley Survey survey, which asked residents how they felt about growth around the Valley.

As the population increases, Ada County officials have started or completed a number of projects to ease the crush. In its 2020 budget, the county set aside $505,290 for a second driver’s license office in the western part of its jurisdiction. If population growth meets each Treasure Valley city’s comprehensive plan 2040 population estimate, it could create nearly $700 million in capital costs for Ada County services.

Residents told the county they felt like infrastructure had been outmatched by the growth in the Treasure Valley area. Gary Smith, former Star City Council member, likened the rampant growth in his town to when an army outruns its supply lines.

Other citizens expressed their concerns about new growth to the south of Boise and about whether or not economic growth would be able to provide well-paid jobs to all the people moving to the Ada County area.

Ada County spokeswoman Elizabeth Duncan said Wednesday’s meeting would be the first of many opportunities for residents and governments to voice their opinions in communitywide conversations.

“This was the first of multiple events planned to make sure cities and counties are on the same page of all different aspects of growth,” Duncan said.

Ada County does not have a strategy to deal with the massive amounts of growth happening in and around it at this point in time, Duncan said, but these meetings are the first step in making sure every stakeholder has a say in what that plan will be.

Responding to growth in a measured and well-planned way is key to the county’s future, elected officials and experts agreed.

Lachiondo wants the county to be a “connector” between the various municipalities dealing with the explosive growth. Gathering accurate data to make informed decisions was a key aspect of what Lachiondo hopes Ada County will be bringing to the table as time moves on.

“We want to understand what people are thinking about, concerned about,” she told the gathered residents. “Growth is like aging; it’s going to happen, the question is how can we do it in a graceful way.”

Part of that data-collection mission is being done by the Community Planning Association of Southwest Idaho. Over the next few months, Compass will conduct a fiscal impact analysis to determine how the continued growth of the Ada County area will affect future costs to governments throughout the Treasure Valley.

Carl Miller, the principal planner for Compass, said the group would also updating its population forecast to reach out to 2050 by the end of 2019. Miller said those new numbers would help allocate growth throughout the Treasure Valley.

“The fiscal impact analysis will show what cost there will be to government agencies,” Miller said.

Compass is also running another survey due out in the spring of 2020 that will use the “wisdom of the crowds” to determine what Treasure Valley residents’ housing needs, land use desires and other preferences for their collective future.

“If they want downtown living and contract-style housing, we can shift accordingly and can really build our growth allocation accordingly,” Miller said, adding that survey would feed into their public transportation survey also running in the next year.

Once those numbers come back to Ada County and its municipalities, Lachiondo believes every group will come together to respond to the threat of huge expenses. No matter what numbers come back, national fiscal impact expert Carson Bise said having more potential tax revenue is an important part of growth planning for Treasure Valley municipalities planning for their future.

The Boise State University Treasure Valley survey showed an increasing appetite for more ways to fund the costs that come with growth. Potential solutions like impact fees, a tax on new developments that help pay for public service coverage, or a local option for cities to add additional sales taxes in order to pay for the costs of doing business could help respond to the future needs of municipalities. Impact fees can help keep public services at the same level before the development, but national growth expert Michael Lauer said they won’t cover existing deficiencies in public services.

While the local option tax for non-resort cities and counties is still not legal under Idaho law, this tool, if approved by lawmakers, could offer a way for municipalities to recoup funds from retail in the Treasure Valley.

Lachiondo said the county would continue to grapple with growth, but unless every municipality across the Treasure Valley worked together, they would be behind the eight ball.

“The community is asking for this,” she said.

BOISE — A large swath of western downtown will be rezoned to accommodate mixed-use development.