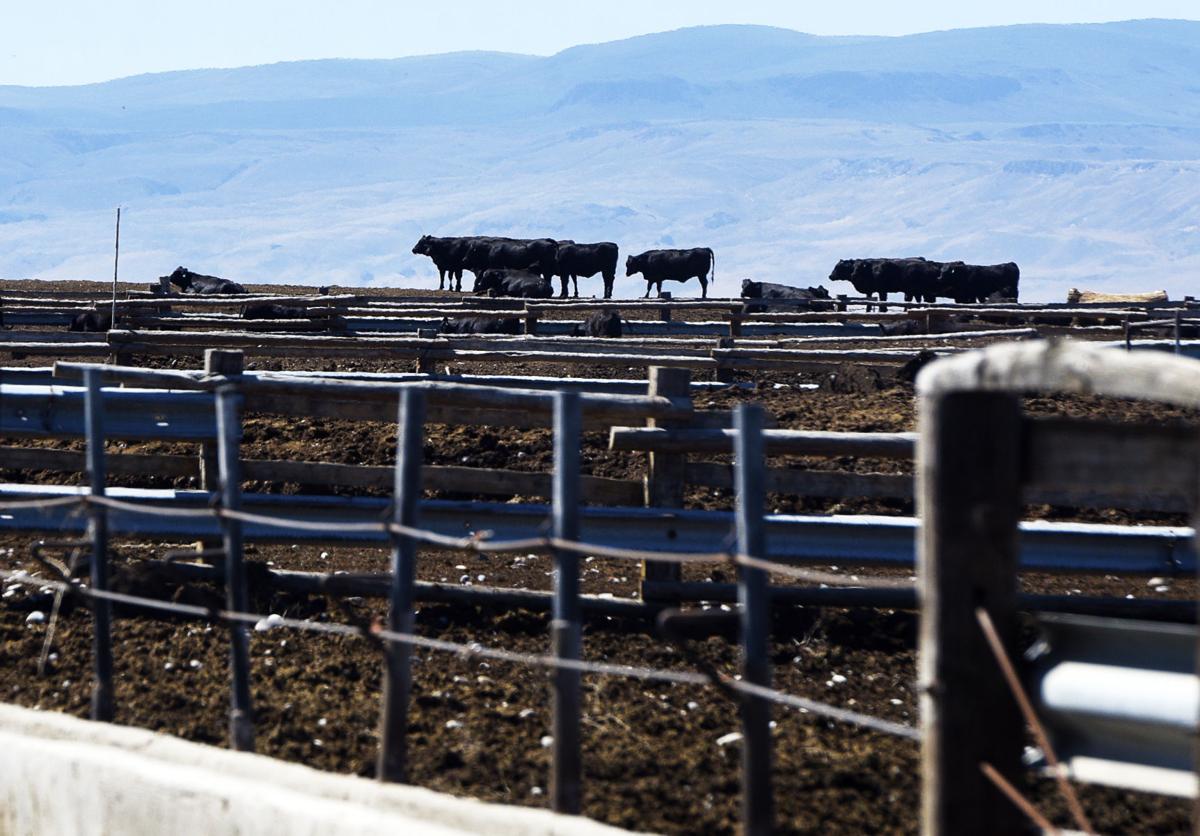 Cattle roam on existing feed lots in Wilder on Friday, June 18, 2021. A proposal for a permit seeks to expand the feed lot, including a doubling of the head on site. 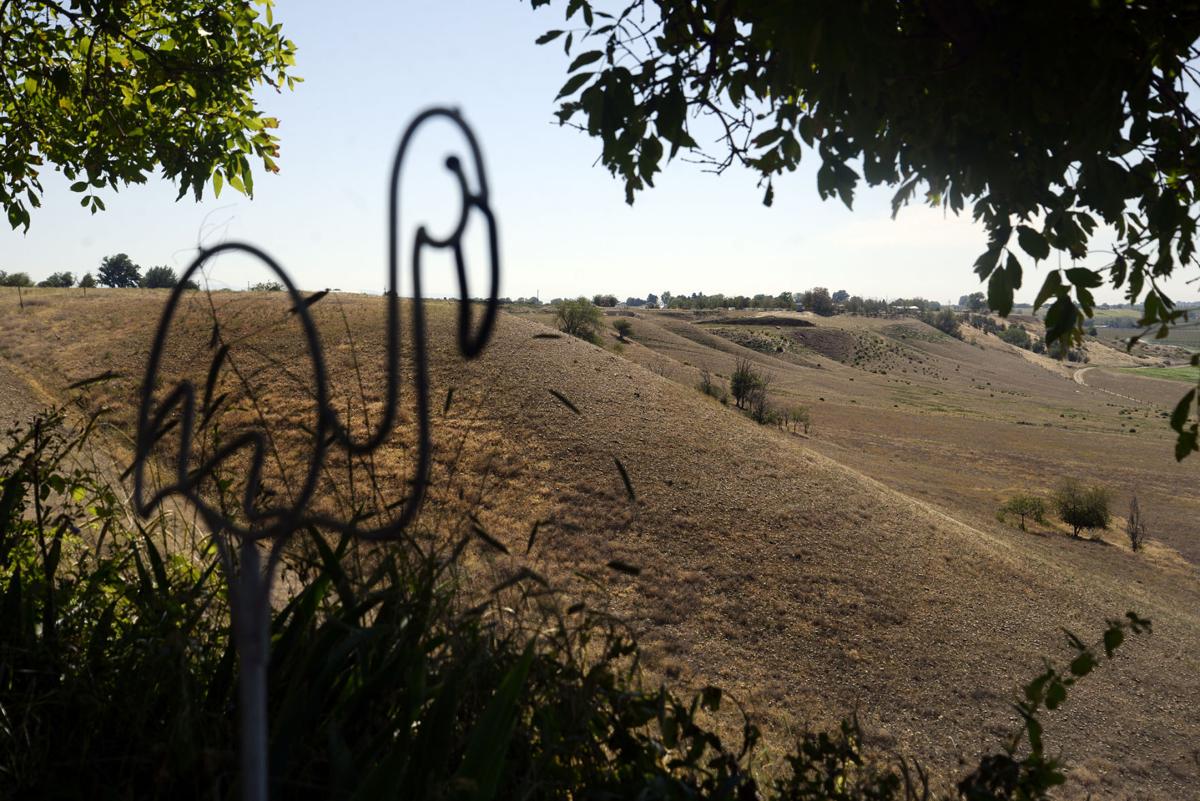 A hillside on proposed land for a cattle feed lot’s expansion is seen from a neighboring property in Wilder on Friday, June 18, 2021. Despite the pending nature of the proposal, cattle are regularly seen grazing the hillside where a dump site is located in the distance. 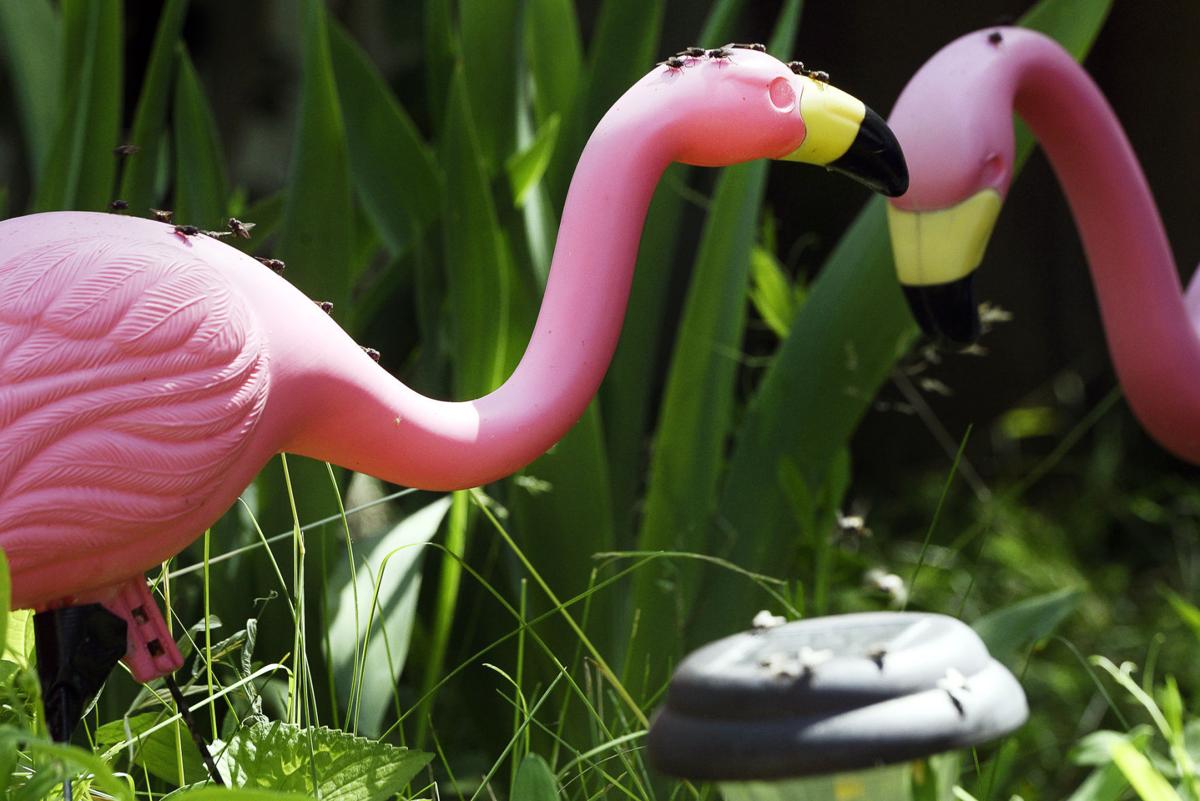 Flies swarm on yard decorations in properties neighboring a cattle feedlot in Wilder on Friday, June 18, 2021. A recent proposal for new permits would allow the feed lot to expand closer to existing homes on nearby Fish Road. 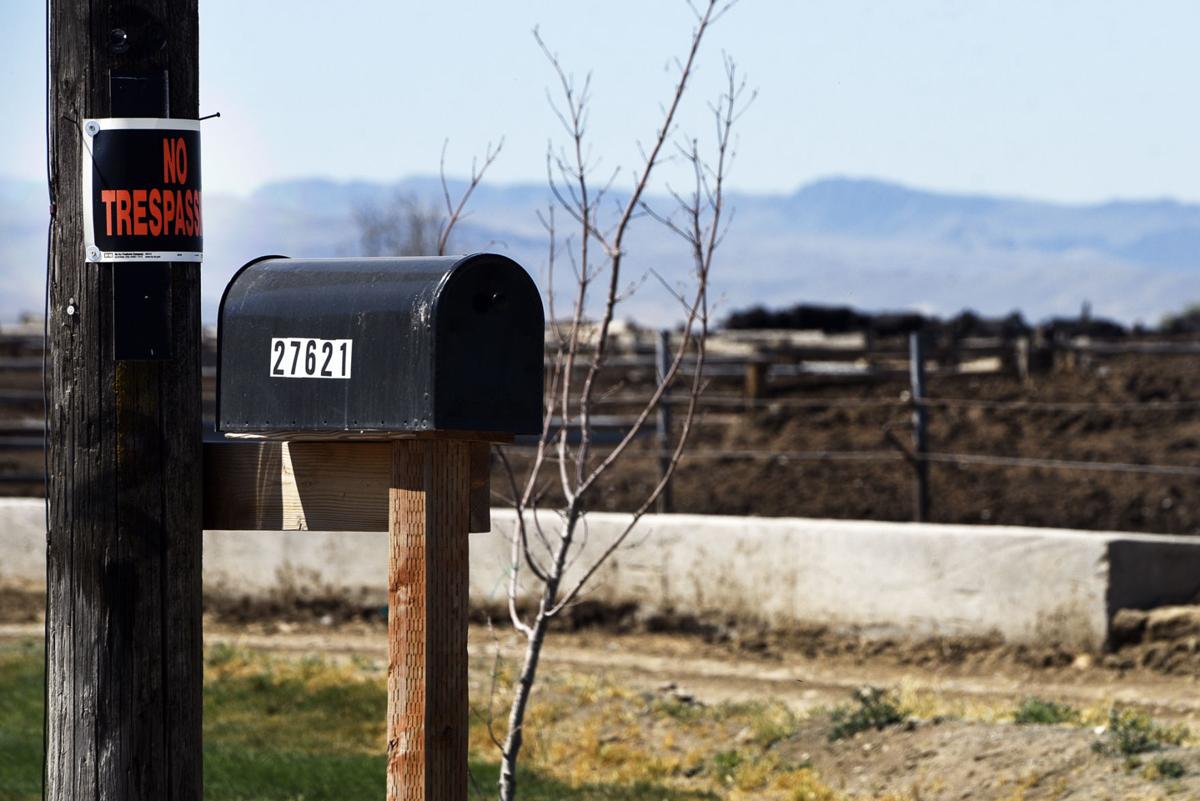 “No trespassing” signs surround the property of a cattle feedlot in Wilder on Friday, June 18, 2021. 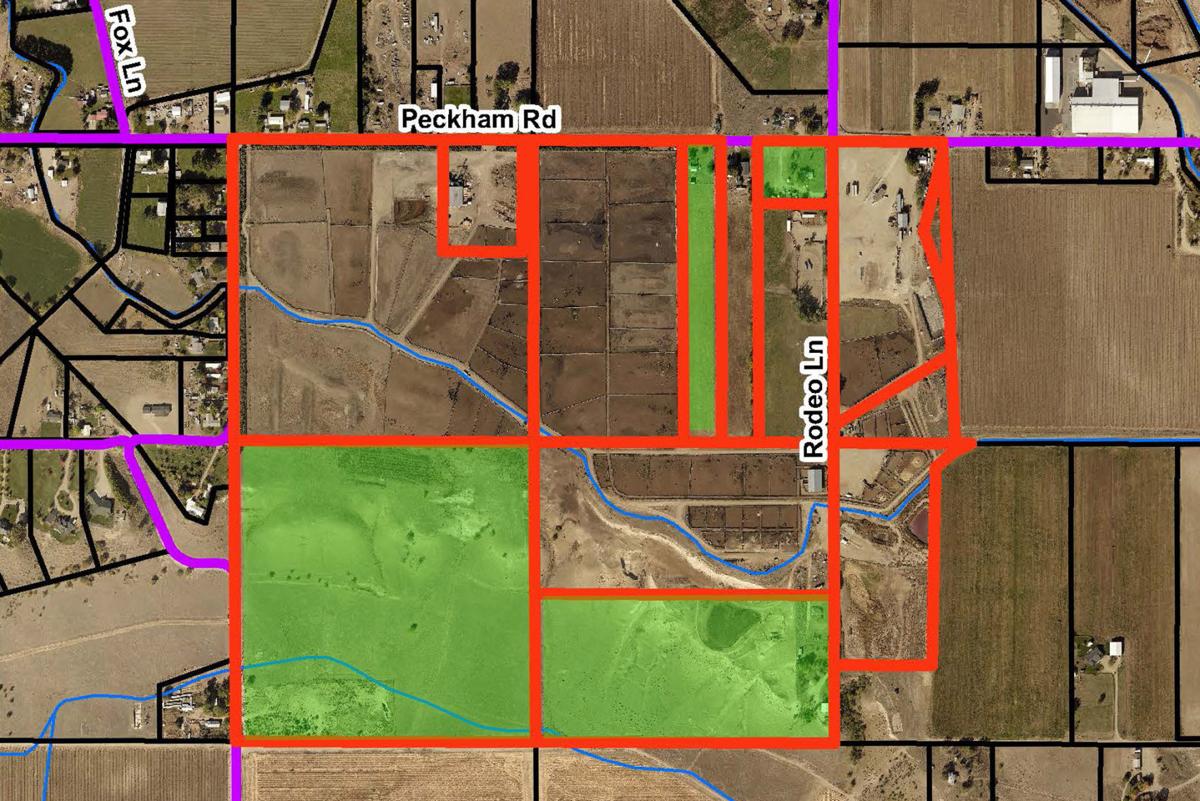 This map shows the proposed feedlot expansion in Wilder. The proposed expansion (parcels highlighted in green) would increase the feedlot from nine parcels to 13. 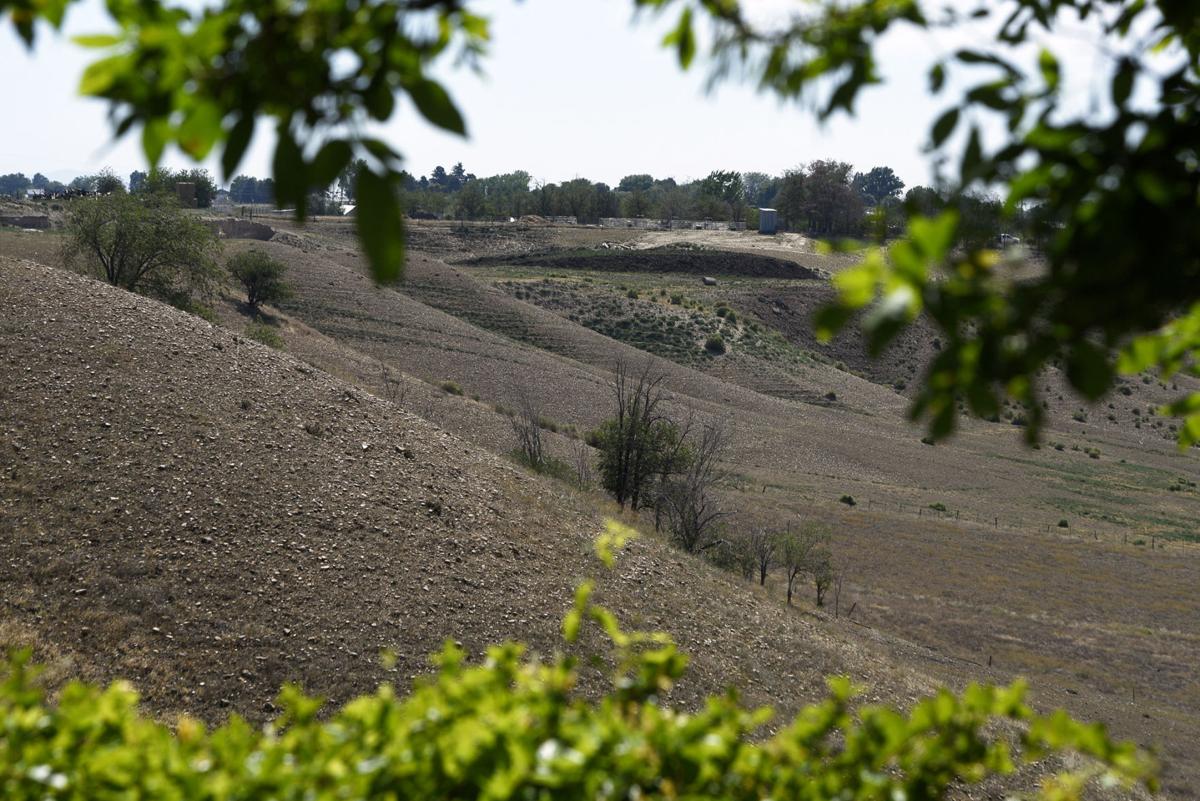 A hillside on proposed land for a cattle feed lot’s expansion is seen from a neighboring property in Wilder on Friday, June 18, 2021. Despite the pending nature of the proposal, cattle are regularly seen grazing the hillside where a dump site is located. 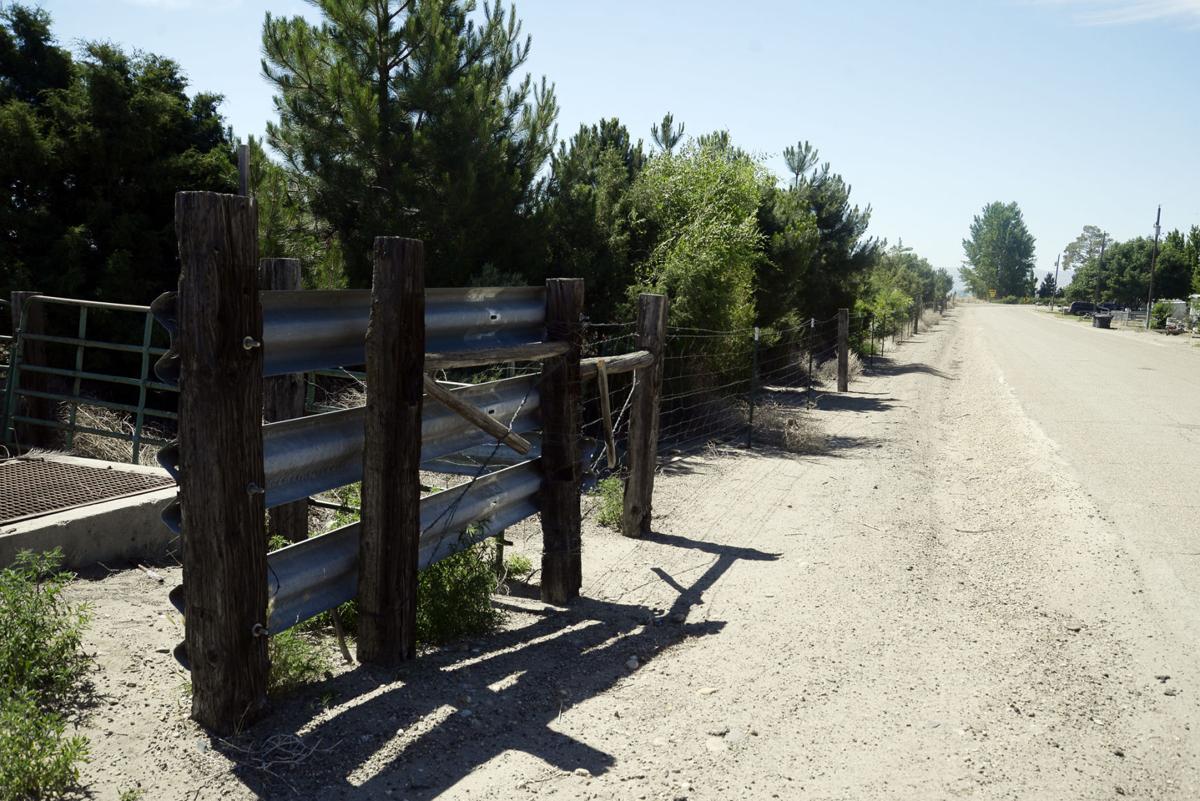 A row of conifer trees obscures the view of a cattle feedlot in Wilder from the home across the street on Friday, June 18, 2021. A recent proposal for new permits seeks to expand the feedlot closer to existing homes on Fish Road. 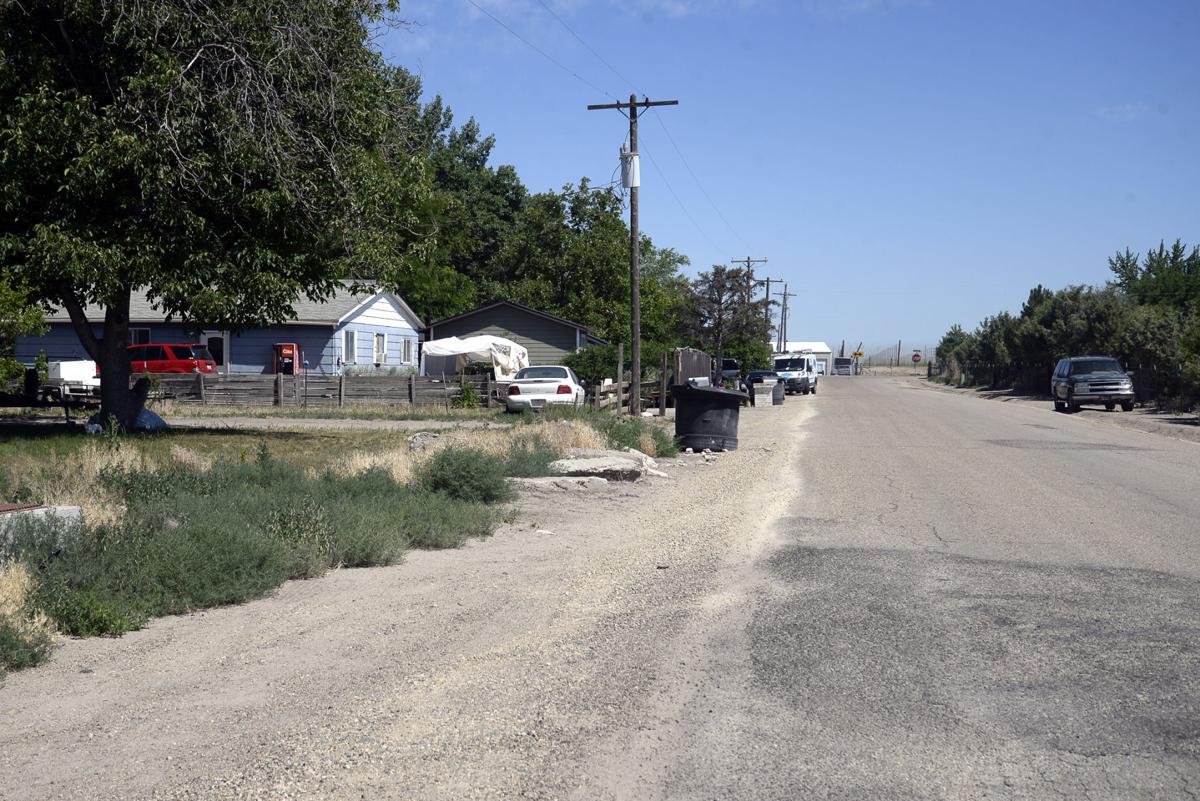 Homes along Fish Road in Wilder are across the street from a cattle feedlot, pictured here on Friday, June 18, 2021. 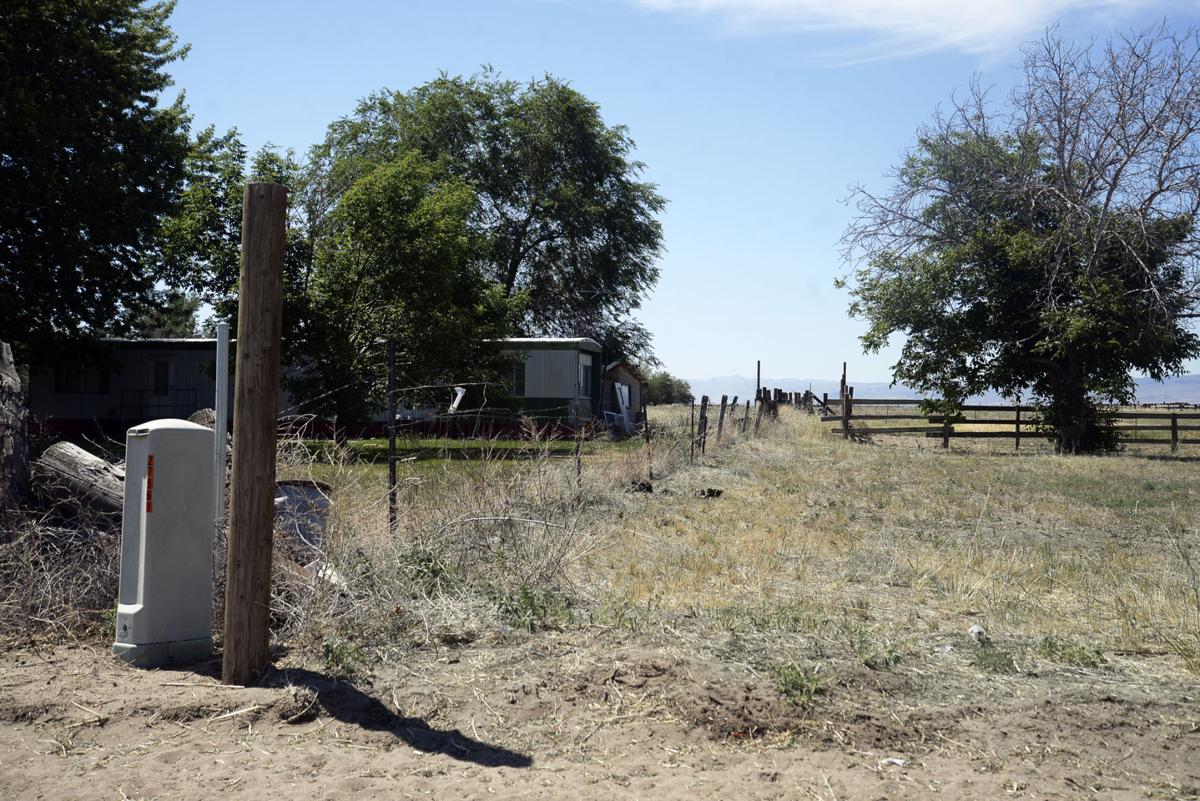 A strip of land proposed to provide an expansion for a cattle feedlot sits adjacent to a residential property in Wilder, pictured here on Friday, June 18, 2021.

Cattle roam on existing feed lots in Wilder on Friday, June 18, 2021. A proposal for a permit seeks to expand the feed lot, including a doubling of the head on site.

“No trespassing” signs surround the property of a cattle feedlot in Wilder on Friday, June 18, 2021.

A row of conifer trees obscures the view of a cattle feedlot in Wilder from the home across the street on Friday, June 18, 2021. A recent proposal for new permits seeks to expand the feedlot closer to existing homes on Fish Road.

A strip of land proposed to provide an expansion for a cattle feedlot sits adjacent to a residential property in Wilder, pictured here on Friday, June 18, 2021.

WILDER — Owners of the feedlot property at Peckham Road and Fish Road in Wilder began telling neighbors about their expansion intentions in late 2019.

Peckham Road Trust trustee Gary Johnston is listed as the land owner, according to Canyon County records. The feedlot is currently allowed to have 6,000 head of beef cattle.

At a December 2019 neighborhood meeting, representatives spoke about potentially expanding the operation to 12,000 head, double what it has now.

The announcement wasn’t well-received by some. Since then, neighbors have ramped up efforts to oppose the proposal. The modification of a conditional use permit was denied in February by the Canyon County Planning and Zoning Commission. Now the trust is appealing the decision and the request is scheduled to go before the Canyon County commissioners on July 13.

“The Planning and Zoning Commission felt it was incompatible with the area,” commission Chairman Robert Sturgill said.

At the crux of the request is a battle between the people who run the feedlot and disgruntled neighbors. Environmental concerns are at odds with agricultural interests.

Beyond the typical tension that comes with a feedlot next to houses, some say previous conditions for the existing permit have been violated. John Hepton, an owner and a manager with Wilder Cattle Feeders, argues the feedlot has zero violations since ownership of the land changed in 2015. Even though the proposal was already denied by the Planning and Zoning Commission, the county commissioners have the final say.

Hepton has a different view.

“If the neighbors are ever going to be happy, that (feedlot) needs to be rebuilt to 2021 standards, not 1950,” Hepton said. “They may think it’s bad that we expand it, but it’s actually for the betterment of everyone.”

Proximity to houses, possible water contamination and potential added traffic congestion spurred the initial denial, Sturgill said. Commissioners had more than 1,000 pages of testimony to review, he added, putting it among the most extensive case he’s heard since joining the commission in 2017.

Neighbors in opposition of the project viewed the initial denial as a victory. Now they’re trying to convince the elected officials to deny the expansion as well.

Among the top issues neighbors have are odors, flies, dust and the potential contamination of water. Several of the proposal’s opponents have argued they want to support agriculture, but not in this instance, given how much the existing feedlot affects them.

An expansion from 6,000 head of cattle to 12,000, and from nine parcels of land to 13 could compound the neighbors’ problems.

The land is zoned for agriculture and Hepton said neighbors should’ve been aware of that when they moved there. Neighbor Sandra Smallwood said neighbors moved knowing they’d be next to 6,000 cattle, not 12,000.

When asked why he wants to expand the feedlot, Hepton said the facility is roughly 70 years old and needs improvements. In order to update it with top technology for dust management, Peckham Road Trust needs more cattle in order to be able to cover those costs.

He said the reason for the appeal is because the Planning and Zoning vote was split and one of the seven commissioners wasn’t present for the vote. Relying on the elected county commission gives the feedlot another shot.

“Until we rebuild the feedlot, they (opposed neighbors) aren’t going to have the opportunity to see,” Hepton said. “I can talk about how we’re going to have an elaborate sprinkler system that’s up to date, automated and that type of thing, but until they see that, I understand they might be skeptical because of what they’ve seen in previous owners and managers.”

Opponents say conditions set for the feedlot in 2004 and 2008 weren’t met, disqualifying the potential expansion. Sixty neighbors signed a petition last year asking the three-member county commission not only to deny the expansion, but to shut down the operation completely. The petition mentions toxic gases emanating from the facility. Full revocation was never considered, Sturgill said.

While the feedlot, or concentrated animal feeding operation (CAFO), has existed since the mid-1900s, it grew in the ’90s, neighbors said. It wasn’t until 2004 that a permit was obtained for the operation, according to public records.

To get the permit, previous owners Grass Cattle Systems were told to follow certain conditions. They included: “The number of animals shall not exceed 6,000 head of cattle” and “The applicant shall install feed pen sprinkling systems” to keep dust and flies down within two years of receiving the conditional use permit.

In 2008, Grass Cattle Systems re-upped its permit despite neighbor complaints that the company didn’t follow the first conditions. The amended permit reinforced the conditions previously established.

Seventeen years since the initial permit was granted, the feedlot’s new owners are trying to expand beyond 6,000 head and neighbors say they haven’t seen sprinklers in use. Hepton said he’d install a new sprinkler system to serve 12,000 head of cattle. He uses his record of zero violations as a reason the permit should be granted.

“The main issue here is the rule of law,” neighbor Brenda Abbott said, “and whether the county elected officials will actually uphold the rule of law because they’re in violation of most of the conditions the county already placed on this facility. They ignored the evidence we sent them.”

Rodriguez has lived in his house on Peckham Road since 2012 and said he’s never once seen any working sprinklers. He doesn’t eat outside in the summer because his food would often be covered with flies if he tried to.

Abbott has submitted her evidence to the county. She believes she has proof of violations. But the county hasn’t enforced any penalties, which is why Hepton said the operation is clean.

Leading up to the February meeting, there was “considerable” written testimony on both sides, Sturgill said. Neighbors raised a laundry list of concerns while employees and former employees at the feedlot described the operation as a good steward of the land.

During the meeting, Hepton said a new sprinkler will help reach his goal of operating dust-free. Though it previously came from different ownership, neighbors had heard this promise before.

In addition to the annoyances that come with the feedlot, neighbors are concerned the expansion would include the Canyon County dump site that was used from 1950 to 1970. Having the feedlot on top of that could exacerbate contamination. Environmentalists are concerned about the feedlot regardless because of the pollutants from excess manure.

“It essentially comes down to the manure,” said Josh Johnson, an Idaho Conservation League conservation associate. “Whenever you put a large number of cows in a concentrated area, they are going to produce a lot of manure.”

That’s what can then lead to water contamination from nitrates and phosphorous. Some neighbors said their water is already contaminated. The Department of Environmental Quality has designated the location as a “Nitrate Priority Area,” highlighting the risks that already exist. Johnson said approval of the proposal would be “a big step backward.”

Prior to the Planning and Zoning decision, Johnson wrote a letter to the county explaining the dangers of approving the expansion request.

“Allowing for a major CAFO expansion within a pre-existing nitrate priority area would fly in the face of water quality protection efforts,” Johnson wrote, “and would bring harm to your residents who depend on groundwater for their drinking water.”

Prior to the Planning and Zoning Commission’s decision, a traffic study reported the expansion would generate 90 trips per weekday. That would introduce “undue interference” on Peckham Road, according to the commission’s Findings of Fact, Conclusions of Law and Order.

Ultimately, the Planning and Zoning Commission voted 4-2 to deny the proposal. Sturgill said he tried to remove the emotion from the decision as he evaluated which way he would vote. He, Patrick Williamson, Sandi Levi and John Carpenter made up the majority.

“The applicant had a strong proposal and seemed like a good organization to work with. Likewise, I think the neighbors had considerable concerns as well,” Sturgill said. “But rather than being swayed one direction or the other, we’re really looking to distill what’s the facts of the matter and how they factor into those considerations.”

Neighbors felt relief after the denial. But with the appeal coming next month, the elected county commissioners will decide the feedlot’s future.

“At least Round 1 went to us,” Smallwood said.