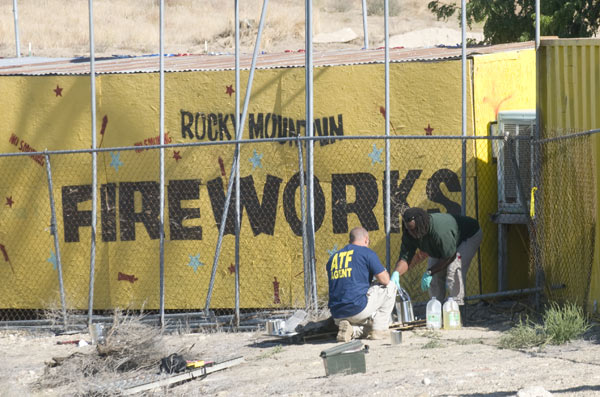 Agents from the Bureau of Alcohol, Tobacco, Firearms and Explosives investigate a Monday fire at Rocky Mountain Fireworks and Fur in Caldwell. 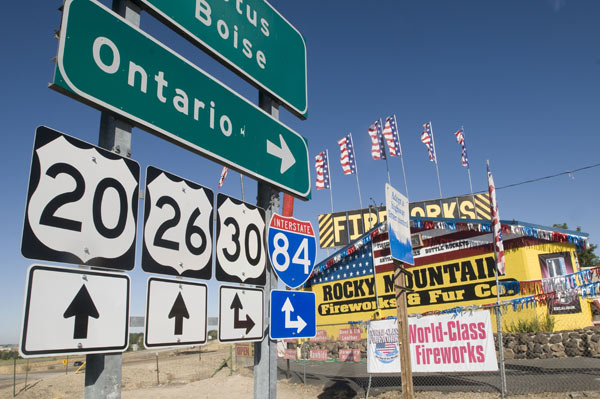 Rocky Mountain Fireworks and Fur is located near Exit 26 on I-84 in Caldwell.

Agents from the Bureau of Alcohol, Tobacco, Firearms and Explosives investigate a Monday fire at Rocky Mountain Fireworks and Fur in Caldwell.

Rocky Mountain Fireworks and Fur is located near Exit 26 on I-84 in Caldwell.

Officials could not say if arson was involved in the blaze, ATF assistant special agent Mark Leiser said. But he said items recovered from the fire would be sent to a forensic lab in California for analysis.

“It is enough of an investigative lead that ATF and the sheriff’s office will explore (it),” Leiser said. “Their taking responsibility is a lead that will be completely and fully exhausted.”

The message claimed activists pumped fuel into a storage space at the business and then ignited it.

The message from a group claiming to be animal rights activists came in an email to the media through the North American Animal Liberation Press Office in Woodland Hills, Calif. Rocky Mountain Fireworks and Fur buys coyote and bobcat pelts and sells trapping supplies, including equipment that helps drown beavers. It also sells knives, predator calls and scents to help lure bobcats.

The message, signed by “The Arson Unit,” warns the business that by “oppressing innocent life, you’ve lost your rights. We’ve come to take you down a notch. Stay in business, and we’ll be back.”

The email also goes into detail about how the fire was set.

The fire was reported at about 5 a.m. Monday morning. Firefighters from six different agencies, including Nampa, Caldwell and Middleton, responded to the blaze in the 14000 block of U.S. Highway 20/26.

A spokesman with the North American Animal Liberation Press Office said the action was consistent with other animal rights activism. He said he does not recall such an incident taking place in Idaho before.

“There’s still a few people who are not willing to give up the profit or what they call the fashion statement of wearing the fur of dead animals on their backs,” Jerry Vlasak said. “It’s about helping animals. Some people want to hear the other side of the story, and that’s what we’re here for.”

Vlasak said he did not know who specifically claims to have set the fire. He said animal rights groups are not concerned about backlash from such actions, because he said they are carried out in the name of justice.

Radical activist groups, including the Earth Liberation Front, and the Animal Liberation Front have been blamed for a string of 17 arsons across the West dating back more than a decade, including at ski resorts in Colorado and university laboratories in Washington state. Fourteen people have been convicted of crimes related to those fires. Such groups are classified as domestic terror threats by the FBI.

The FBI also said it’s helping track down leads in the case.

“We are assisting the ATF to see if there’s a connection to domestic terrorism,” said Deborah Bertram, an FBI spokeswoman in Salt Lake City.

Vlasak declined to say exactly how he received Monday’s message.

“Somebody with a shop full of fireworks and fur at the same time is just kind of asking for it,” Vlasak told the Associated Press on Monday, adding that while he supports such actions, “there’s a firewall between those who are actually willing to break the law to help animals and those of us who are just serving as a press office.”

“It was stopped relatively quickly,” he said. “Overall, there was a minimal amount of damage.”

The fire closed the westbound off ramp on Exit 26, the Exit 26 overpass and Old Highway 30 between Helen Lane and Town Circle, a Canyon County dispatcher said.

Here is the complete statement from the animal rights activists:

“In the early morning hours of Sept. 26, a visit was paid to the Rocky Mountain Firework & Fur Company, a shop that (quite foolishly) sells both highly flammable and explosive toys and the chemically-treated skins of thousands of tortured animals (among some other nasty things, like trapping supplies). A hole was drilled into their storage space, and several gallons of fuel were pumped through, as well as multiple other charges being set beneath an adjoining structure. Ignition devices were set to finish up our work, once we were safely on our way. By oppressing innocent life, you’ve lost your rights. We’ve come to take you down a notch. Stay in business, and we’ll be back.