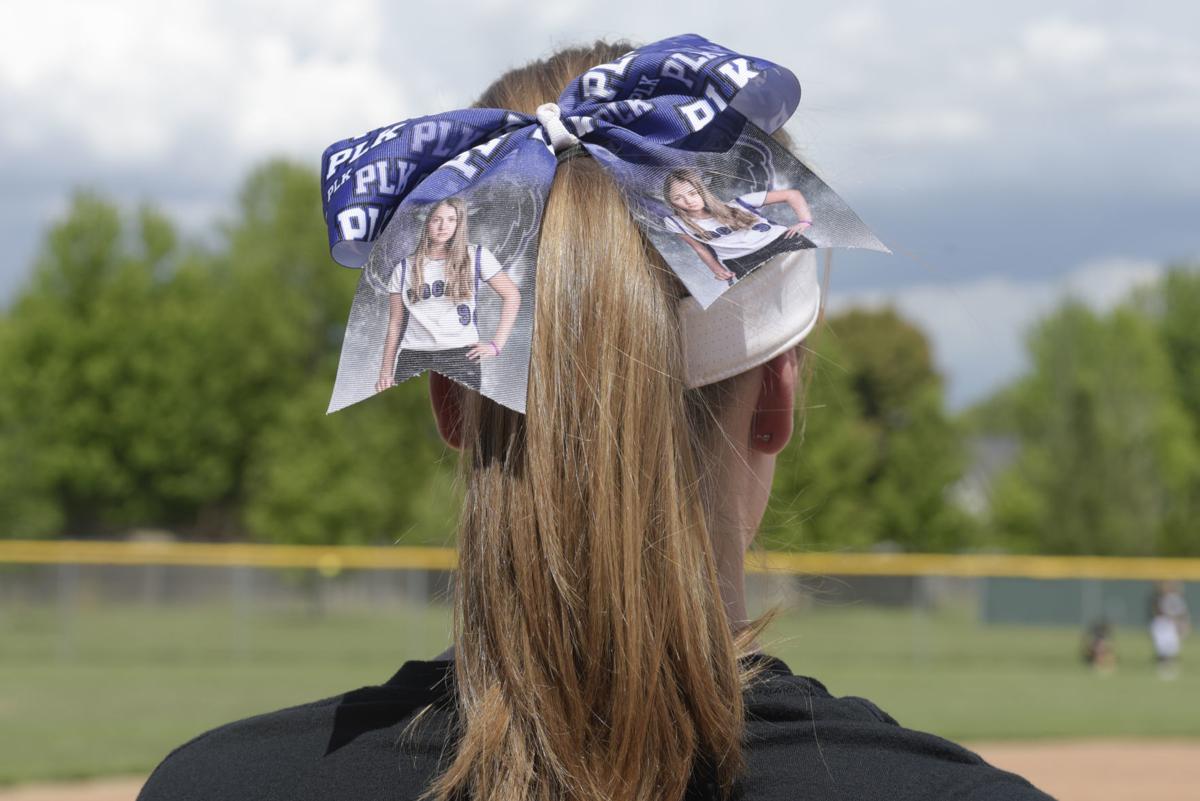 Rocky Mountain sophomore Izzy Taylor wears a bow with a portrait of Kathryn Marshall at practice on May 16, 2018. The Grizzlies are in the midst of a historic season, playing to honor fallen teammate Kathryn Marshall, who died last season from sudden toxic shock due to sepsis. 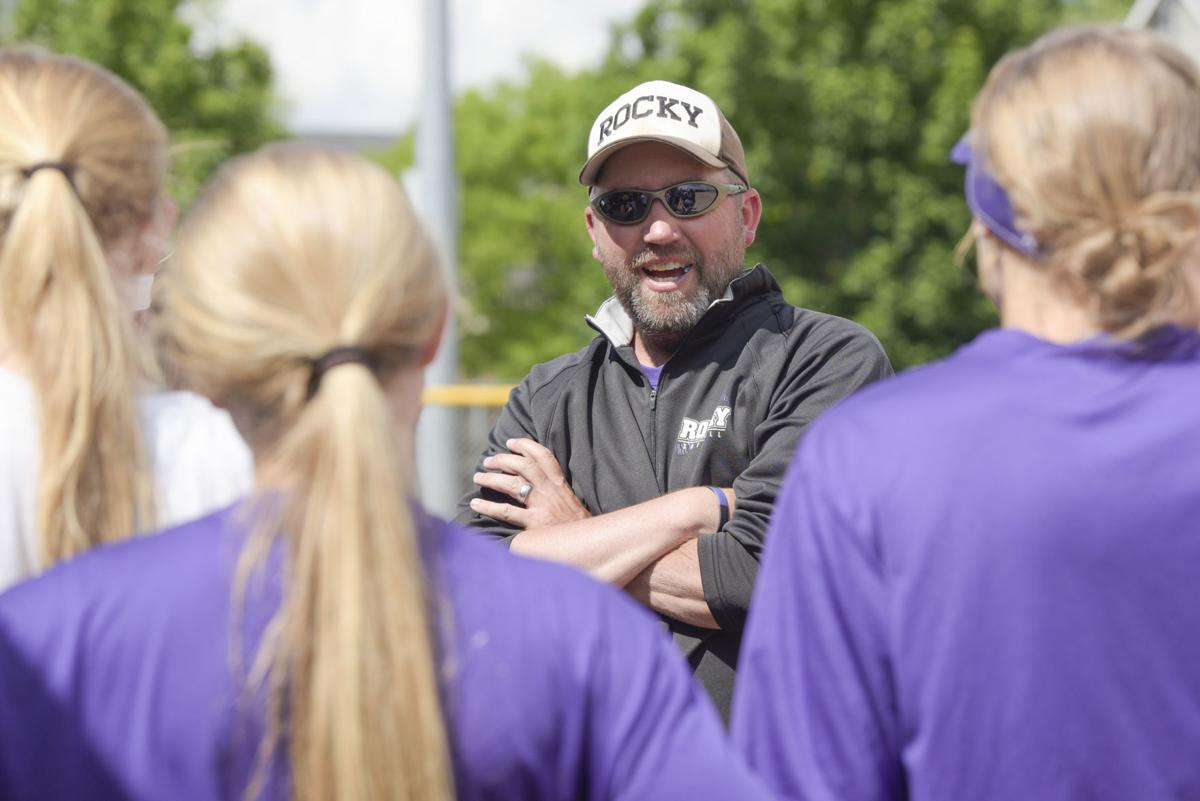 Rocky Mountain softball coach Brian White huddles with his players before the next drill at practice May 16 in Meridian. 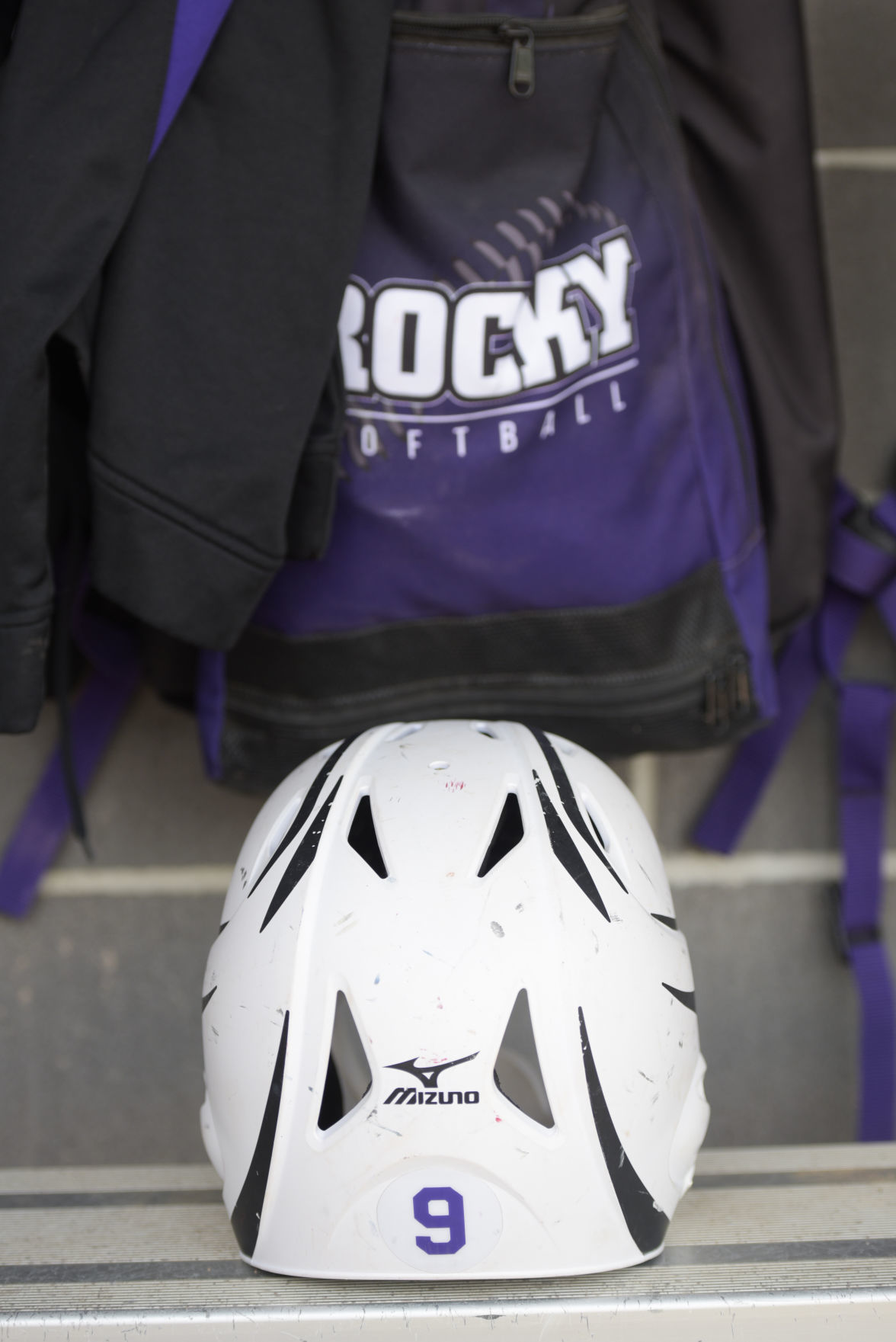 The number 9 is printed on Rocky Mountain softball helmets in memory of teammate Kathryn Marshall, who died last season at the age of 15. 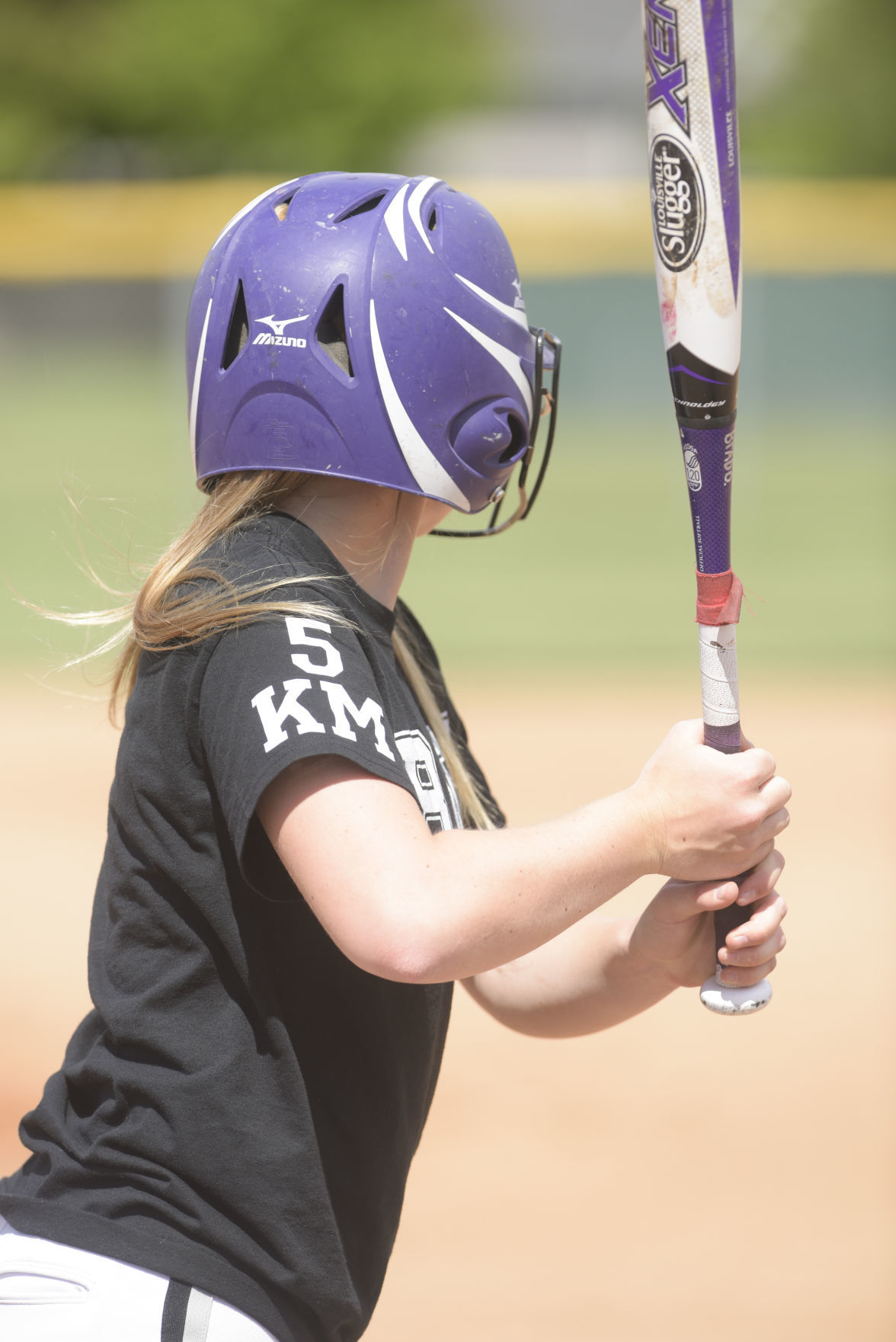 Rocky Mountain’s Ashley Swanson (5) wears the initials “KM” for Kathryn Marshall, who died last year due medical complications at the age of 15. 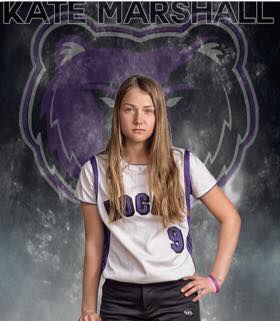 Marshall was a valuable part of the Rocky Mountain softball team last season before her unexpected death on May 12, 2017. 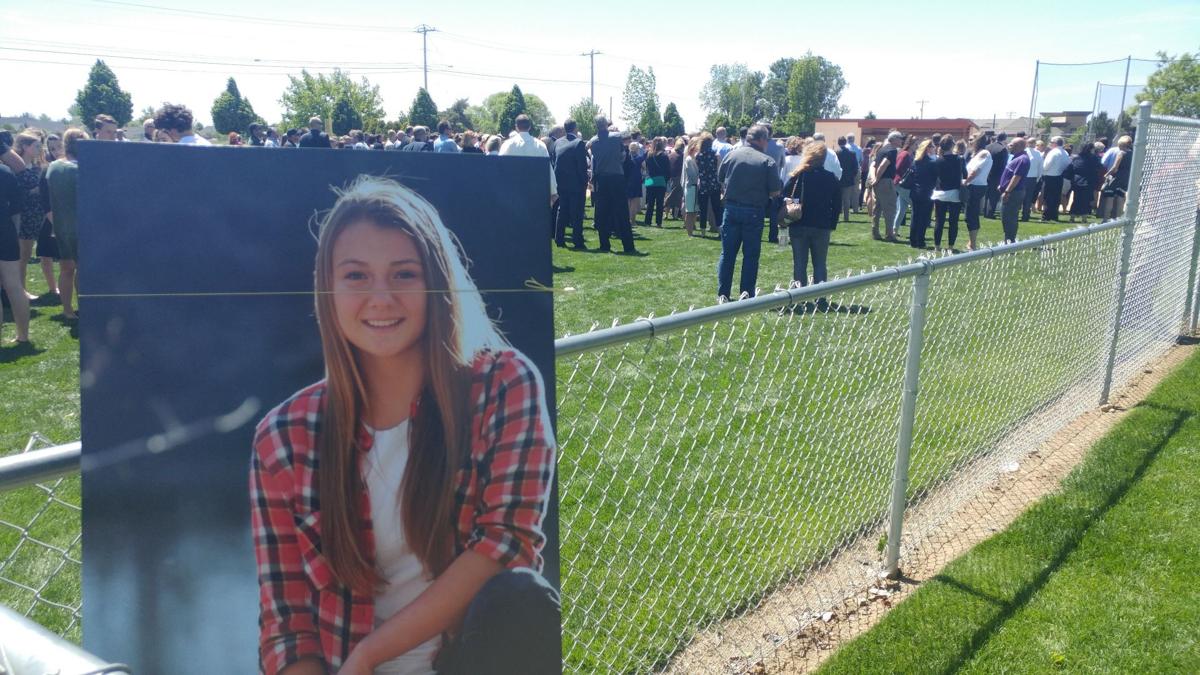 Family, friends and loved ones of Kate Marshall gathered on a softball field at Settler’s Park in Meridian on May 24, 2017, to remember and honor the 15-year-old, who died May 12, 2017. 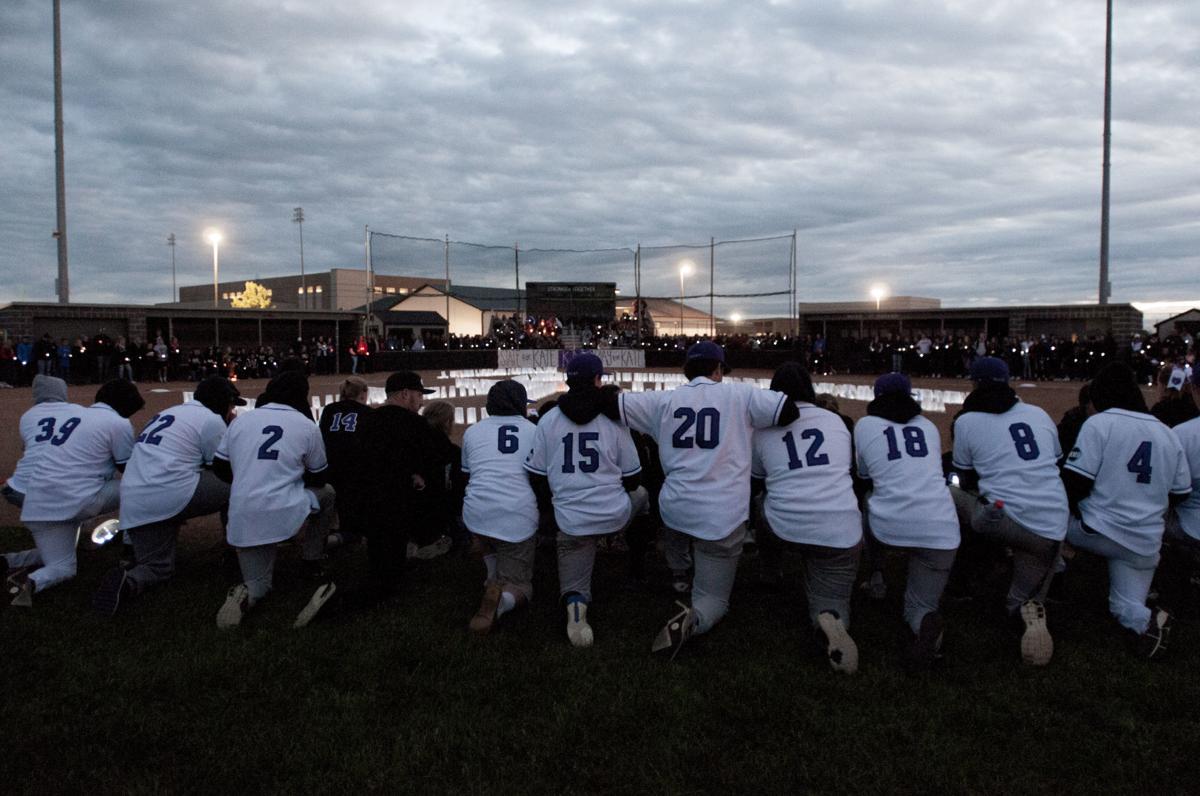 People gather to pay their respects and honor to Kathryn Marshall on May 17, 2017, at the Rocky Mountain softball field. 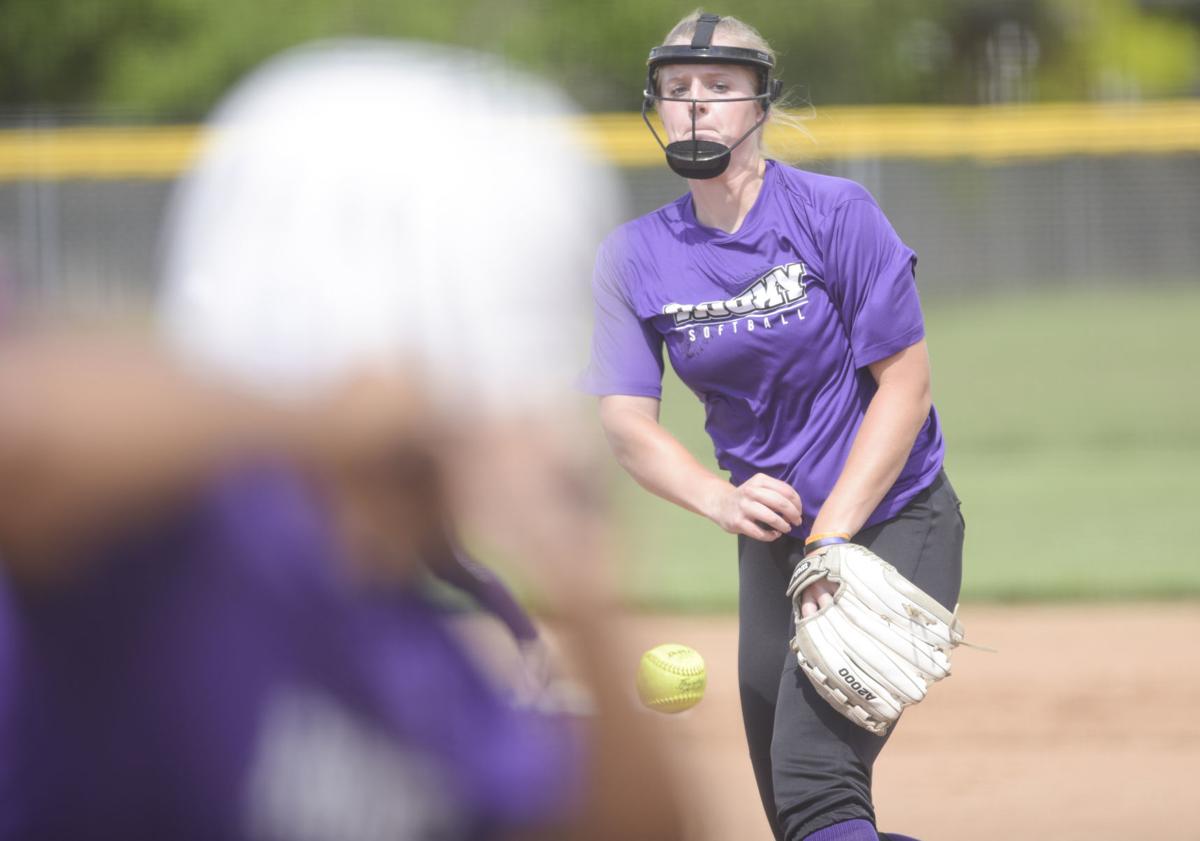 Rocky Mountain pitcher Katelyn Wilfert (14) delivers a pitch during practice May 16 in Meridian.

Rocky Mountain sophomore Izzy Taylor wears a bow with a portrait of Kathryn Marshall at practice on May 16, 2018. The Grizzlies are in the midst of a historic season, playing to honor fallen teammate Kathryn Marshall, who died last season from sudden toxic shock due to sepsis.

Rocky Mountain softball coach Brian White huddles with his players before the next drill at practice May 16 in Meridian.

The number 9 is printed on Rocky Mountain softball helmets in memory of teammate Kathryn Marshall, who died last season at the age of 15.

Rocky Mountain’s Ashley Swanson (5) wears the initials “KM” for Kathryn Marshall, who died last year due medical complications at the age of 15.

Marshall was a valuable part of the Rocky Mountain softball team last season before her unexpected death on May 12, 2017.

Family, friends and loved ones of Kate Marshall gathered on a softball field at Settler’s Park in Meridian on May 24, 2017, to remember and honor the 15-year-old, who died May 12, 2017.

People gather to pay their respects and honor to Kathryn Marshall on May 17, 2017, at the Rocky Mountain softball field.

Rocky Mountain pitcher Katelyn Wilfert (14) delivers a pitch during practice May 16 in Meridian.

MERIDIAN — Baylie Murray drew the No. 9 in the dirt every time she stepped into the batter’s box.

Izzy Taylor wore a bow with her picture on it for every game.

Those were just a few of the things the Rocky Mountain softball team did this season to honor the memory of former teammate Kathryn Marshall. A little more than a year after her sudden and unexpected death, the girl called Kate by those who knew her best was the driving force of a historic season for the Grizzlies.

The Grizzlies put together the best record in program history at 27-4, set a program record in wins and claimed the 5A District III title for the first time ever. All while they played with a simple mantra: “Play like Kate.”

“She was the soul of our team this season,” Taylor said.

A DAY THAT STOOD STILL: There was excitement in the air for the Rocky Mountain softball team on Friday, May 12, 2017.

The Grizzlies were just 48 hours removed from qualifying for the state tournament for the third consecutive season. It was going to be a short fun practice before they really turned their attention to state. But that practice never happened.

Brian White got called into the office toward the end of the school day. The Rocky Mountain head softball coach was told that something was happening with Kathryn Marshall. So he picked up his phone and called her father, Trent Marshall. White wasn’t prepared for what he was about to hear next.

Kathryn was in critical condition.

So instead of holding practice, White called his team into his classroom and briefly talked about state. He didn’t mention a single world of Kathryn’s condition and sent them on their way home. White didn’t want them to hear the news from him. He then immediately got into his vehicle and headed to St. Luke’s Boise Medical Center.

White, though, was too late.

“It was heartbreaking,” White said. “You see her on Monday and Tuesday and you think it’s a normal cold and she is going to be back in no time. You don’t think that’s going to happen to a 15-year-old girl.”

NO ORDINARY STREP THROAT: Strep throat was a common occurrence for Kathryn, according to Trent.

So when she woke up the Monday morning before with a sore throat and a bad cough, no one thought anything of it. Kathryn rode with the team to their district tournament game against Meridian that same day. But she was unable to play. Kathryn then watched from the bleachers the following day.

That was the last time anyone from the team saw or talked to her.

“I remember loving on her because she was sitting and freezing in really hot weather,” said Taylor, who was the only other freshman on the team and became best friends with Kathryn that season. “She had sweats and a sweatshirt on and I could tell she wasn’t feeling good at all. If I would have known that was the last time I would have ever talked to her, I would have said so much more.”

After Kathryn stayed home from school and practice for the next two days, she awoke Friday morning with a bad cough and was having a hard time breathing. She was admitted to the hospital at 9 a.m.

Unbeknownst to Kathryn’s parents, the strep throat had already turned into sepsis by the time they brought her in. Trent was told by doctors that it only happens to about 0.3 percent of the worldwide population.

As Kathryn’s condition grew worse with every passing hour, her family was quickly ushered out of the hospital room. The only time they were allowed back in was when the doctors came out and said, “We can’t save her,” opening the door for the family say their final goodbyes.

“I was in absolute shock and disbelief,” Trent said. “I mean here was my strong, athletic kid who played with broken fingers and a torn ligament in her wrist, and this is what happened to her? I kept asking, ‘Why is this happening?’ I was so confused and devastated.”

A COMMUNITY IN SHOCK: Word quickly spread of Kathryn’s passing.

Taylor was told by her father, while Murray received the news via text message.

“I remember completely not believing it,” said Murray, who grew close with Kathryn after the two shared some time at second base. “I had to ask like four people to make sure that it really happened. I mean what are you supposed to do when you get a text like that? Even after they told me it was true, I thought, there’s no way, I just saw her three days ago.”

The entire team got together for a bonfire later that night. They sat silently with just the sound of the crackling of the wood.

Five days later, the team met again. But this time, they were not alone.

A vigil was held on May 17, 2017, at the Rocky Mountain softball field for Kathryn Marshall.

Kathryn started playing softball when she was 8. She started with Meridian Youth Baseball and Babe Ruth before making a name for herself with the Boise Blast.

She lived up to the hype that White had heard all about from fellow coaches. On the first day of tryouts, she hit a ball off the center field wall pitched by starting ace Katelyn Wilfert.

Kathryn earned her spot on varsity that day and eventually became the team’s starting second baseman. Her bat was also big toward the latter half of the season.

“She was pretty quiet but really competitive out there,” White said. “She was like a sponge. Any time we talked about baserunning, fielding and hitting, she was always listening and asking questions on how to do something. She just absorbed everything and paid attention and went out there and did it.”

Those memories and more were shared by the hundreds of community members, players and coaches from around the Treasure Valley who attended the vigil to offer their condolences.

“I can’t tell you how many kids came up and talked to me. And most of them, I didn’t even know,” Trent said. “It was all so overwhelming.”

But despite the emotional whirlwind of those five days, Rocky Mountain still had a state tournament to play.

The Grizzlies opened up state with an 11-0 shutout win over Bonneville but were bounced out shortly after. They lost 9-4 to Eagle before being blown out by Kuna 16-6.

“After what had happened, the wind was kind of out of our sail,” White said. “It was really tough for the kids to get out there and play. But I thought they still did a heck of a job, considering.”

A NEW BEGINNING: The Grizzlies had a renewed focus this season.

They hit .404 as a team, and 11 of the 14 players on the roster had a batting average of better than .300. The pitching duo of Wilfert and Emma Shiflet combined for 161 strikeouts and held opposing teams to an average of just 3.22 runs per game.

That’s resulted in the Grizzlies beating opponents by nearly seven runs per game and setting a program record of 27 wins. Rocky Mountain came within one win of a guaranteed third-place finish at state and two from playing for the championship. But the Grizzlies still won the district title for the first time in program history with a 16-6 rout over the eventual state champion, Boise.

The unprecedented season wasn’t without its difficulties. The absence of Kathryn was still very much fresh on the minds of the Grizzlies. Nowhere was this more evident than a road game against Timberline High School in Boise on March 15.

Timberline was the site of last year’s district tournament. It was the last time the team saw and talked to Kathryn.

“For me, it still feels unreal,” Murray said. “It feels like I should turn around and there she should be.”

But Rocky Mountain made sure to keep her memory alive this season.

A No. 9 sticker was on the back of every helmet. Players wore T-shirts with her initials on them. Bows with her picture and the initials PLK — “Play like Kate” — were in the hair of many of the players for each game.

A large No. 9 was drawn into the dirt before the start of the district championship game.

And whenever Kathryn’s family attended games this season, the players made it a point to go up and give them all a hug.

“It’s brought us to tears,” Trent said. “That’s just the character of these girls. Brian (White) has done an amazing job making us still feel like we are welcome there.”

GONE, BUT NOT FORGOTTEN: While Kathryn wasn’t on the field with the Grizzlies this season, she was still very much a part of them.

Whether it was on the cleats of Murray, on the bow of Taylor, a giant No. 9 in the dirt or through father Trent, mother Martie and younger sister Liz, who all attended the state tournament in Chubbuck, Kathryn’s memory lived on through these Grizzlies.

“She would be so excited about everything we did this season,” Murray said. “We were determined. We gave everything we had this season and she was with us every step of the way. We thought about her the whole time and did it all for her.”