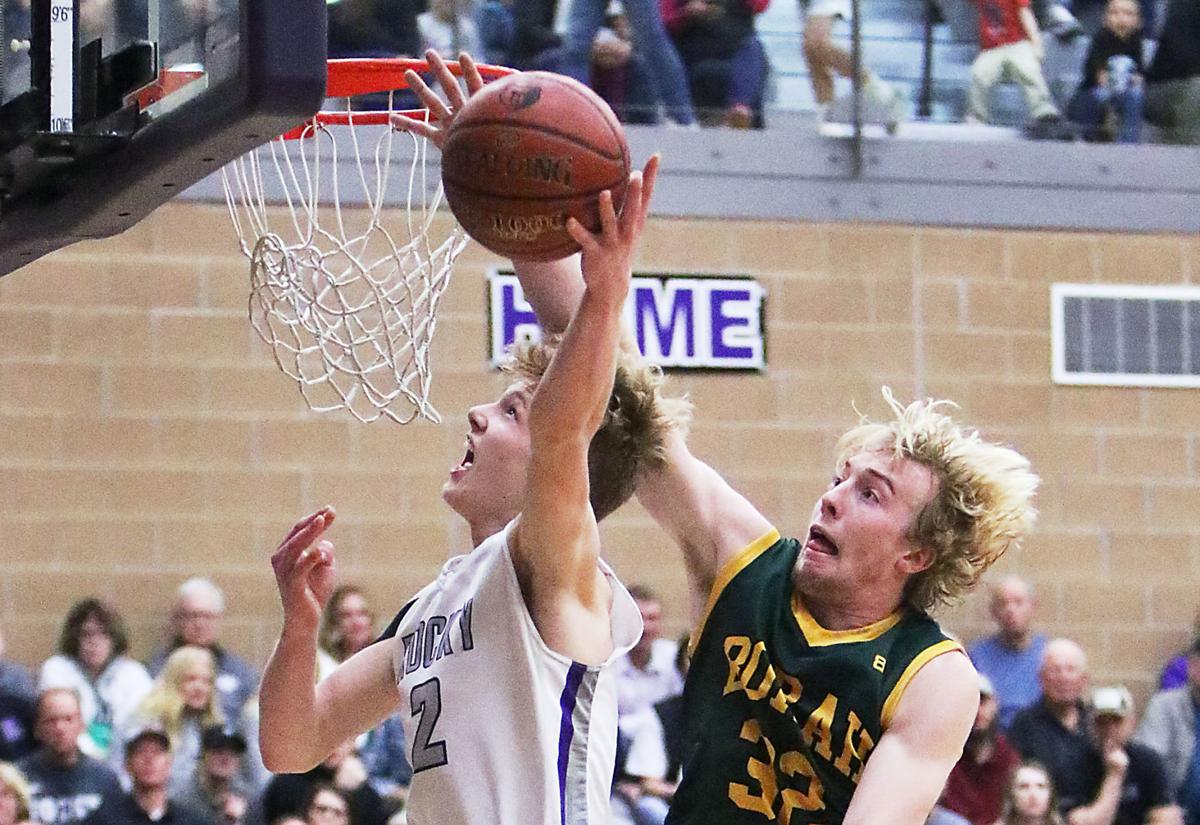 Rocky Mountain guard Straton Rogers (2) puts up a shot around the defense of Borah’s Austin Bolt (32) during the 5A District III Tournament championship game Friday. 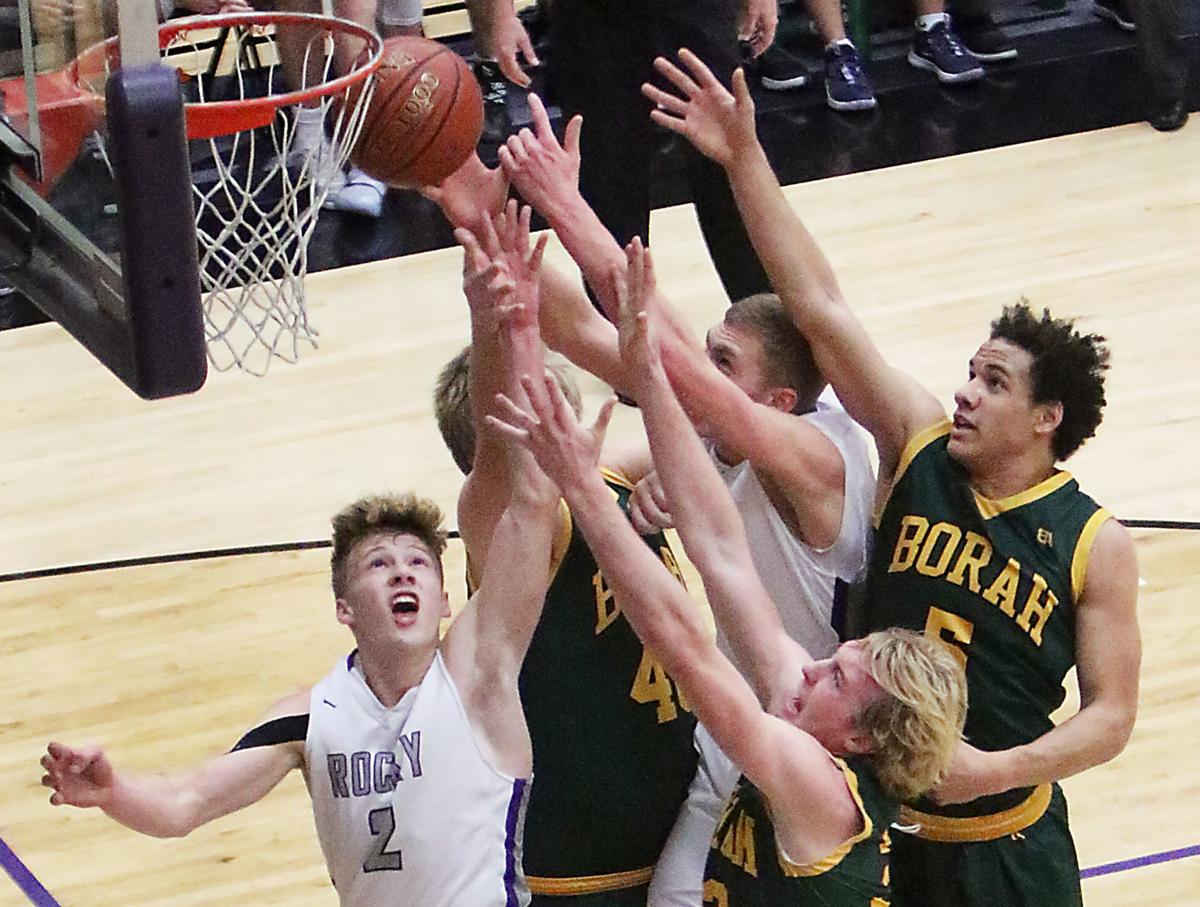 Members of the Rocky Mountain and Borah boys basketball teams scramble for a rebound under the net during the 5A District III Tournament championship game Friday. 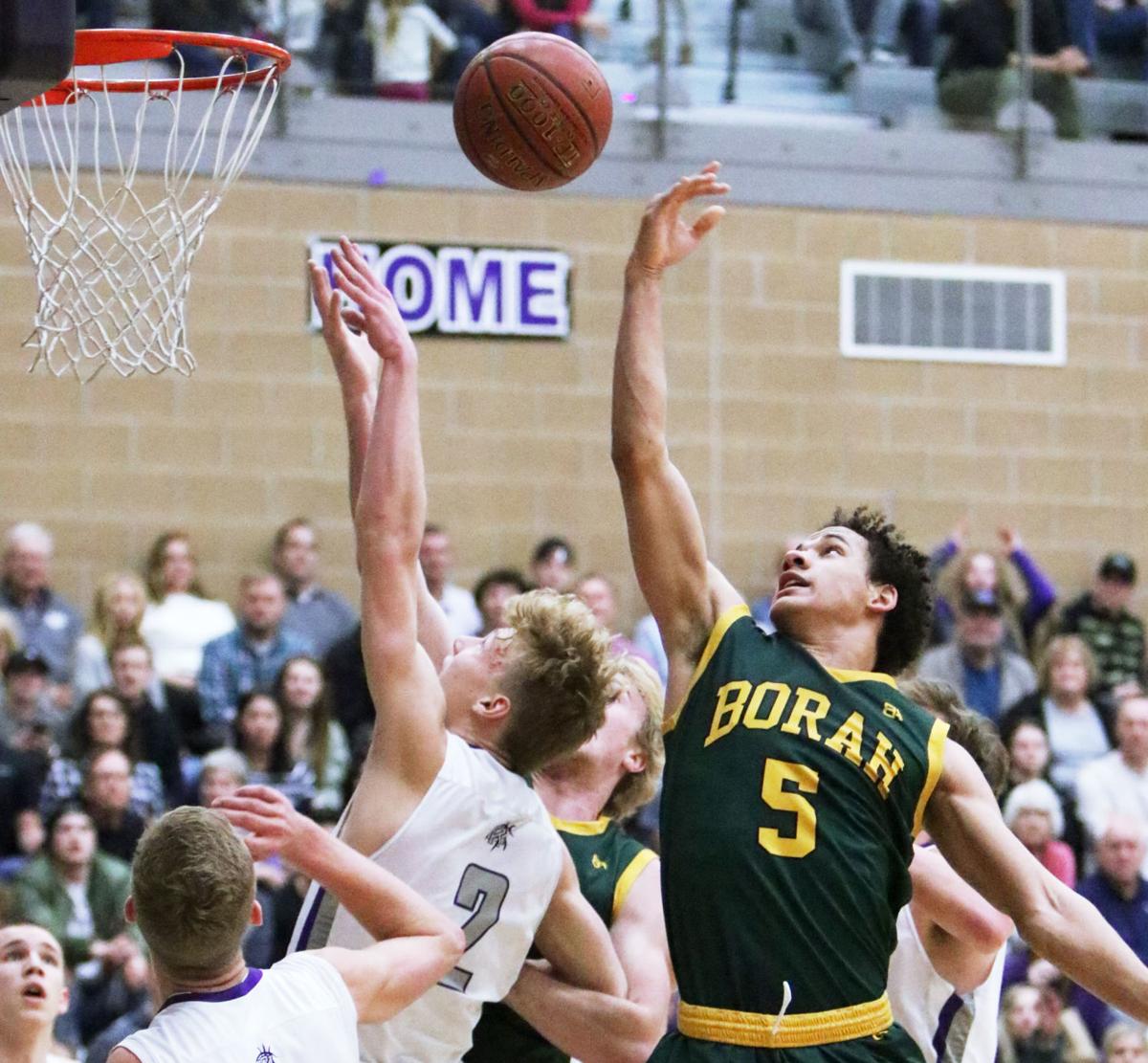 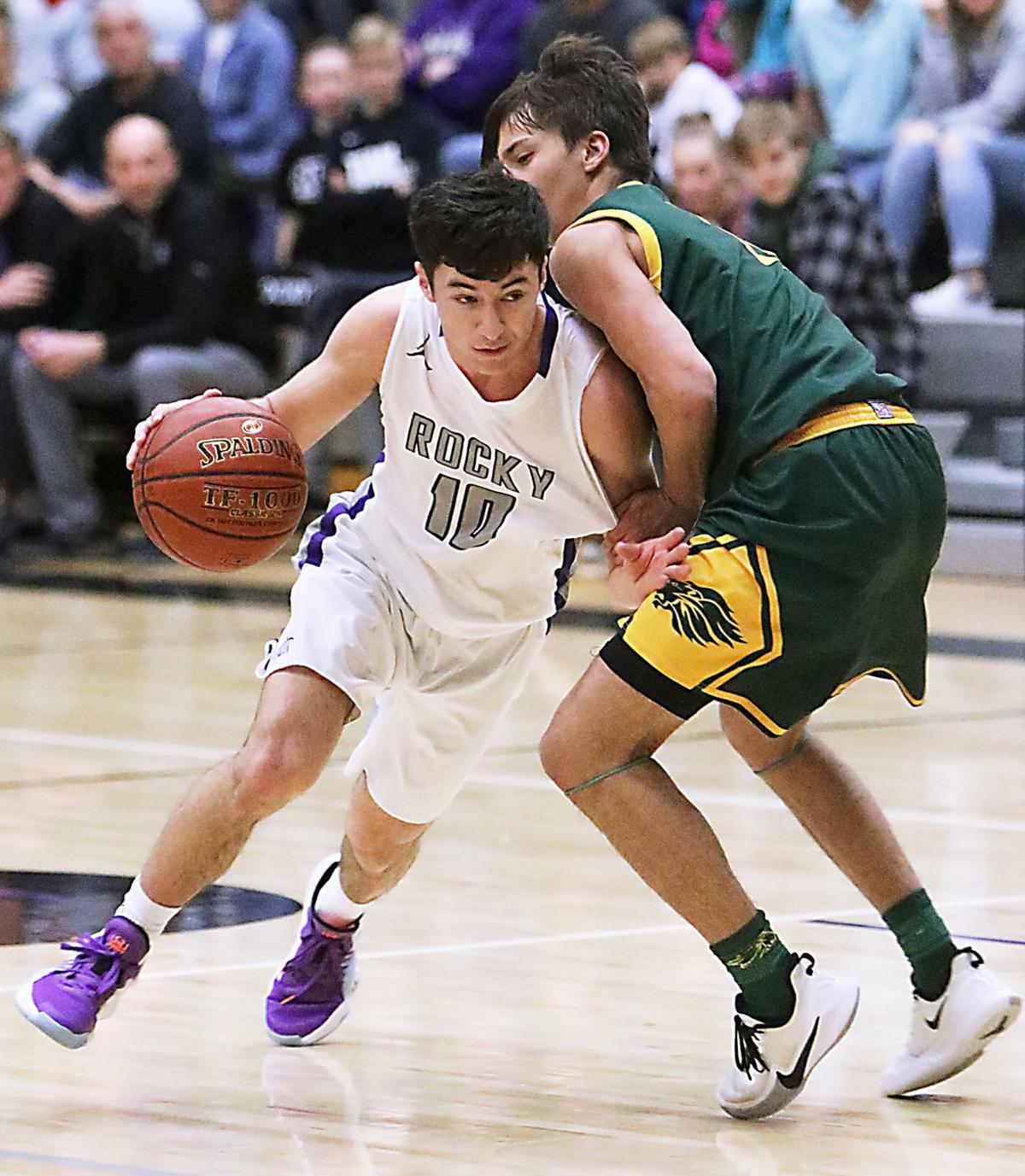 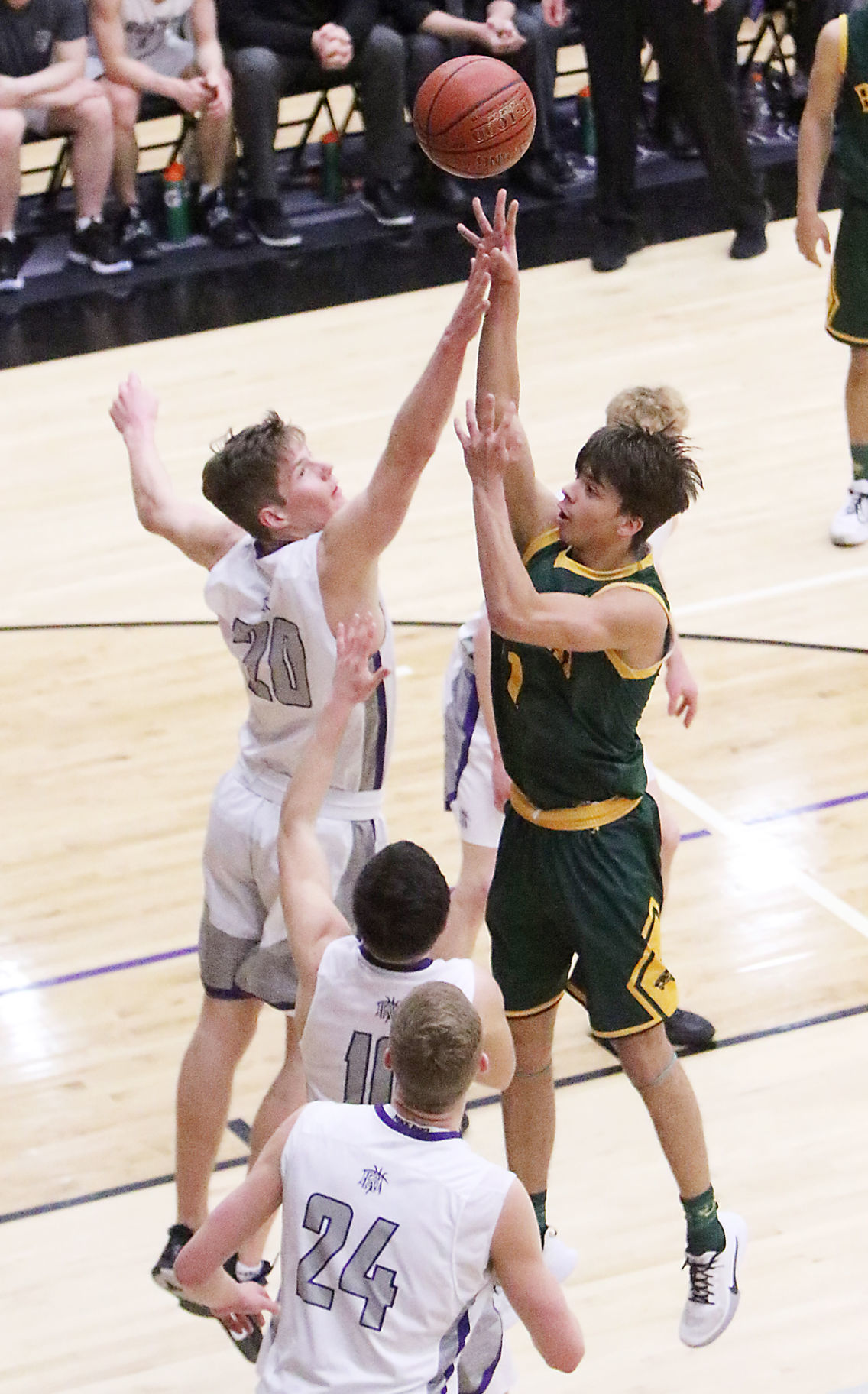 Rocky Mountain guard Straton Rogers (2) puts up a shot around the defense of Borah’s Austin Bolt (32) during the 5A District III Tournament championship game Friday.

Members of the Rocky Mountain and Borah boys basketball teams scramble for a rebound under the net during the 5A District III Tournament championship game Friday.

MERIDIAN — The Rocky Mountain boys basketball team is human after all.

The Grizzlies, who had won their last 13 games by double digits with a point differential of almost 31, were tested for the first time in a long time. But it still wasn’t enough to deprive them of another district title. The top-ranked team in the state upended No. 4 Borah 50-38 in the 5A District III championship game Feb. 28 at Rocky Mountain High School for their third district crown in four years.

“We’re gonna have that banner up there for a long time,” senior guard Townsend Tripple said. “It was the last game on this home floor for us seniors, so it felt good to get a win.”

Tripple led three different players in double figures with 16 points to go with seven rebounds. Senior guard Cooper Frith added 11 points and junior guard Jaden Hansen had 10 for the Grizzlies (23-1), who found themselves in an unexpected fight midway through the third quarter.

They appeared poised to run away with yet another game when Tripple got his own putback following a block by Borah’s Austin Bolt. The heads up play capped a 9-0 run and gave the Grizzlies a commanding 28-10 lead with one minute and 35 seconds remaining in the half.

But the Lions (19-5) stormed back with a run of their own. They scored eight unanswered points, including on a catch-and-shoot from Bolt with 1.1 seconds left after receiving a full-court heave from Isaac Dewberry. It cut the deficit down to 28-18 at the break.

It began the second half with a 11-4 run and got all the way within three at 32-30 following a jumper by Luke Hoetker with 3:10 to go in the third quarter.

“I loved getting pushed like that,” Rocky Mountain coach Dane Roy said. “I knew Borah was going to do it, they came out in the third quarter and really hit us in the mouth. Probably most coaches would have called a timeout, but I just wanted to see what my guys were going to do, how they’re going to respond.”

They responded well. That’s as close as the Lions got.

Rocky Mountain held Borah off the scoreboard for the first three minutes of the fourth quarter and its lead crept back up to nine at 42-33. Dewberry’s 3-pointer with 5:02 remaining trimmed the lead 42-36 to give the Lions some life.

But senior Briggs Ranstrom took all of that way with an emphatic two-handed slam 30 seconds later. The Idaho State signee posterized Bolt by going right over the top of the 6-foot-4 future Boise State football player to put the lead at 44-36.

“When he came out and hit that, we’re like, ‘This is over,’” Tripple said.

The Grizzlies iced the game away at the free-throw line. They made six out of eight free throws to put another trophy in their already full trophy case and enter state on a high note. It was something they didn’t do a year ago.

Rocky Mountain had its string of district titles ended by Borah before being upset by Post Falls 54-50 in the opening round of state, snapping its three-peat attempt.

“It’s big for all of us knowing that last year our season ended short of where we wanted to go,” Hansen said. “So it’s all in the back of our heads that we’re not losing another game this season. We’re not going out like we did last year.”

The Grizzlies will now go into the postseason the winners of 20 consecutive games — the longest in the 5A classification and the second-best in the state behind only 1A Division II Lakeside (21). They haven’t lost a game since Dec. 7. And that was a 96-94 double-overtime defeat to Wasatch Academy Prep (Utah) at the Great Western Shootout in Utah. Wasatch is the fifth-ranked team in the country with Division I commits to the likes of Michigan State.