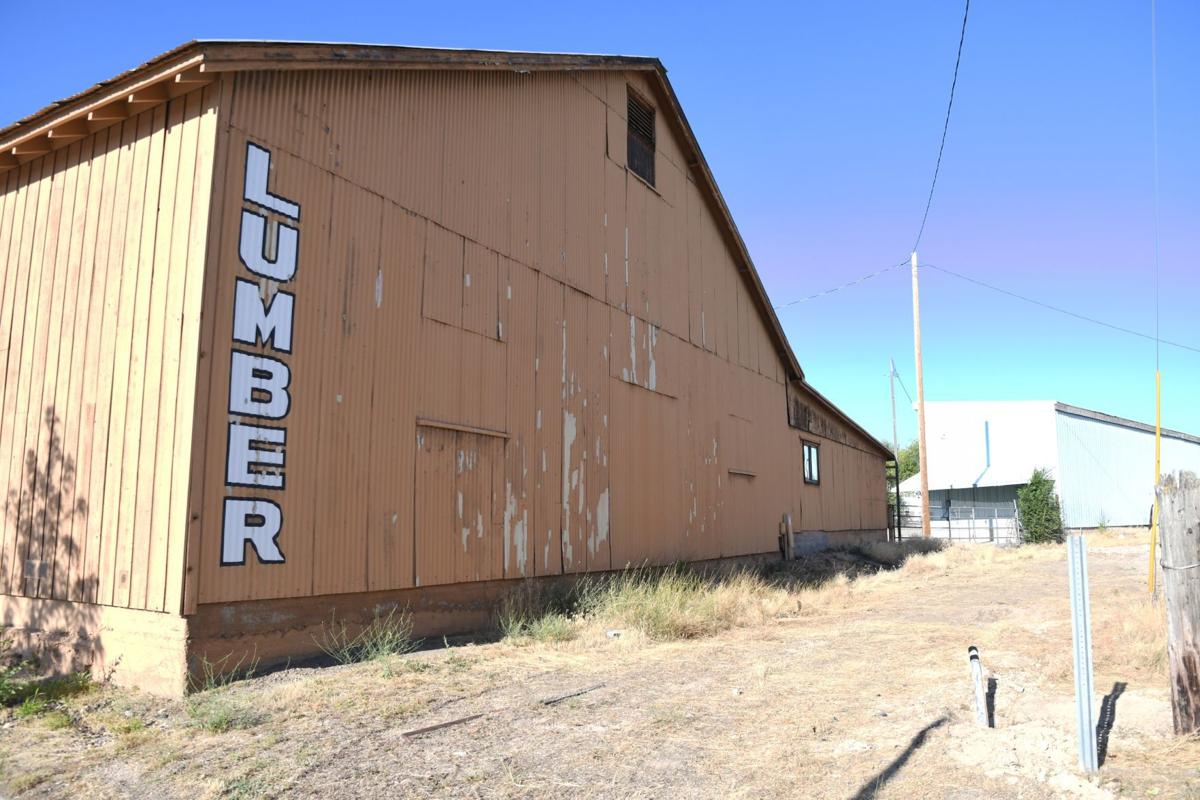 Bill Ditz, managing member for the Mountain West Group, wants to build a 6-acre development with retail, office, theater space, 190 units of residential condos and apartments, and a possible convention center on the southeast corner of Broadway Avenue and Main Street in downtown Meridian.

An aerial shot of downtown Meridian showing where the Landmark Center at Meridian Station is planned. 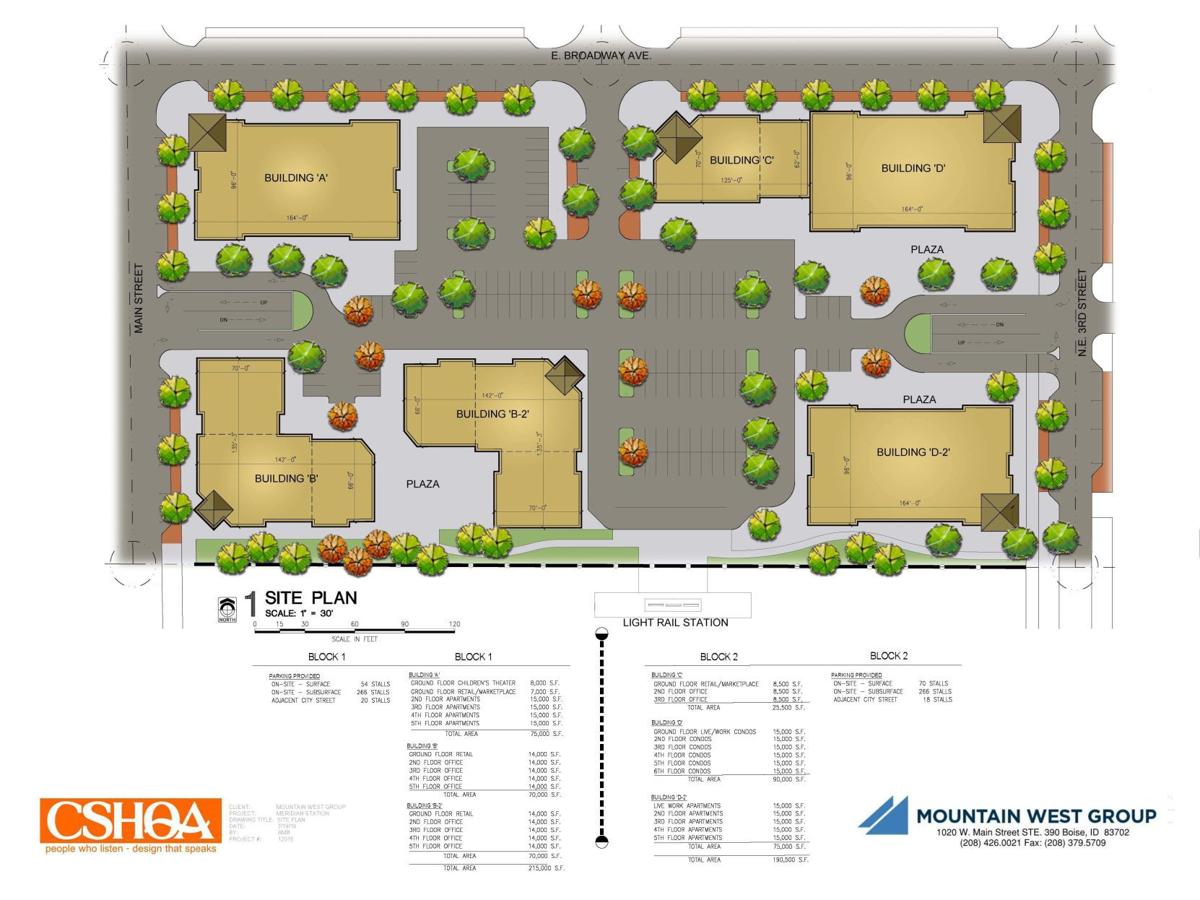 A site plan for the Landmark Center at Meridian Station across from Meridian City Hall on the southeast corner of Broadway Avenue and Main Street.

Bill Ditz, managing member for the Mountain West Group, wants to build a 6-acre development with retail, office, theater space, 190 units of residential condos and apartments, and a possible convention center on the southeast corner of Broadway Avenue and Main Street in downtown Meridian.

An aerial shot of downtown Meridian showing where the Landmark Center at Meridian Station is planned.

A site plan for the Landmark Center at Meridian Station across from Meridian City Hall on the southeast corner of Broadway Avenue and Main Street.

Across from Meridian City Hall, and in the heart of downtown Meridian, is a patch of industry land that sticks out in the mostly urban area.

“It doesn’t take a rocket scientist to walk out to that property and say, ‘Jeez, this isn’t being used very well,’” said Bill Ditz, managing member for the Mountain West Group.

It has been Ditz’s vision for 10 years to build something on the land that would better fit the area. A piece of that vision is within arm’s reach.

Ditz is in the preliminary stages of a six-building development that would bring new businesses, restaurants and shops downtown Meridian — something city staff have been trying to incentivize for years. The project, known as the Landmark Center at Meridian Station, would include retail shops, offices, theater space, 190 condo and apartment units, and possibly a convention center on the southeast corner of Broadway Avenue and Main Street.

The 6-acre plot across from city hall is owned by the Oregon Short Line Railroad, a subsidiary of the Union Pacific Railway, but over the next month Ditz and his staff plan to wrap up a contract with the railroad, allowing them to build on the ground. As of Friday the city of Meridian had not received any applications with the same name or a similar name to the development, according to Meridian City Clerk Chris Johnson.

In total, the Landmark Center at Meridian Station’s six buildings would be 405,500 square feet, or roughly the size of seven football fields. The project would have a subterranean parking garage underneath the development’s six buildings with roughly 500 parking spaces — in addition to the 162 planned above ground between the buildings.

At the heart of the develop would be 8,000 square feet of theater space for the Treasure Valley Children’s Theater, a local nonprofit that served more than 800 students in classes and 150 students in its performance program last year.

The theater would be able to seat roughly 400 people and could serve as a performing space for not just the nonprofit, but for improv groups, dance recitals and other performances groups, according to Autumn Kersey, executive director of the children’s theater. All of that would give people a reason to visit downtown, she said

“We’re very excited about this proposal,” said Kersey. “The purpose of their vision is really to light a fire under downtown Meriidan.”

The theater would have rehearsal, classroom and back-of-house space for its many performance programs. In January the nonprofit moved to a new space a mile south of New Ventures, off Meridian Road, on Pennwood Street. As it is, Kersey is cramming sometimes 60 people into the space’s 40-seat auditorium for small performances.

Kersey has to use other performing spaces across the valley for her larger performances. The children theater’s spring performance of “Shrek” brought in 1,500 people. Despite investing 70 hours of production time and $15,000 into the play, Kersey was only able to hold three performances because of the space limitations. If she had a larger auditorium, she could run the show for an entire month, she said.

The theater would be below four floors of apartments, and across from two buildings with retail on the floor level and four stories of office above. Ditz said his ambitious goal is to start construction on that half of the development mid-2020 and finish it in 2022.

The second half of Landmark Center at Meridian Station, that would begin construction 2022, would include a six-story and a five-story building with condos and apartments. That phase would also include a three-story building that could become the highly sought after convention center that officials have been having conversations about for several years.

Historically Meridian businesses have struggled to find meeting and event space in the city. Earlier this year, the Meridian Chamber of Commerce was in the process of raising funds for a study indicating the feasibility of creating an auditorium district in Meridian. The district would generate money through lodging taxes, and could run a bond to build a convention center.

On Friday Rich Bonney, CEO of the Meridian Chamber of Commerce, said he had not heard about the project and could not comment on whether or not the chamber would be interested in the space as a convention center. With the far-off timeline for the second phase of the project, Ditz said there is still time to have conversations about the convention center in the future.

Another major project is underway in downtown Meridian. Developers Josh Evarts is partnering with Pacific Companies to built two four-story buildings with apartments, restaurants, shops and office space on Main Street between Broadway and Idaho avenues. The development, referred to by several downtown officials as a catayst for downtown Meridian, is slated for completion in November 2020.