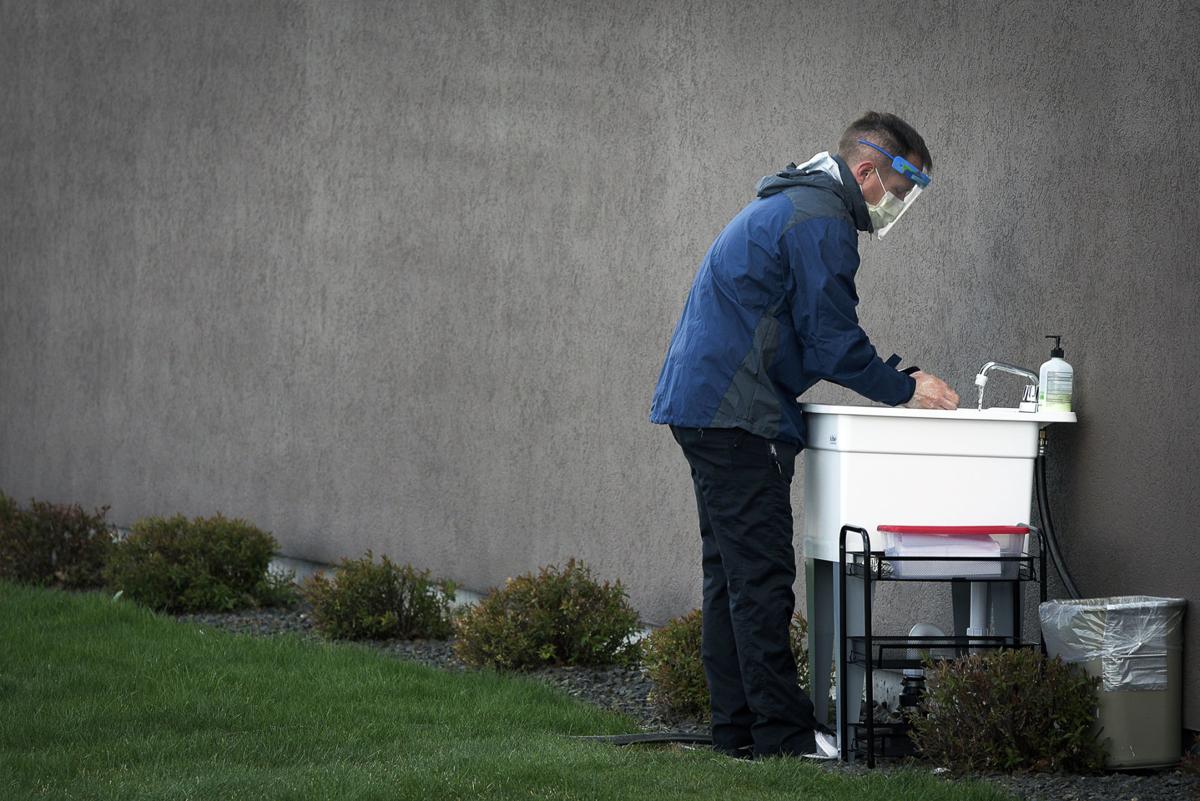 Medical personnel wash and sanitize their hands before going to work at a drive-up testing facility for COVID-19 in the early afternoon on Thursday, April 2, 2020, at Primary Health Medical Group in Nampa. 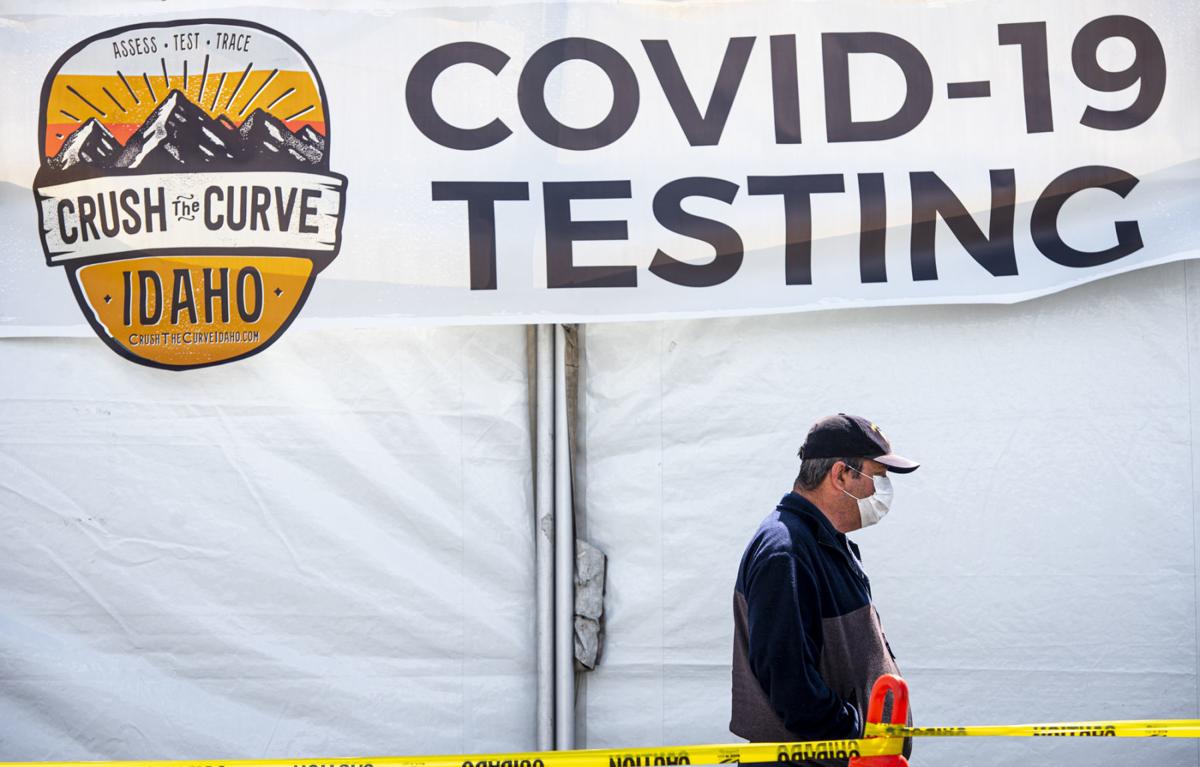 People stand in line to receive a COVID-19 antibody test on Thursday, April 23, 2020, at a Crush the Curve Idaho testing location in Meridian. 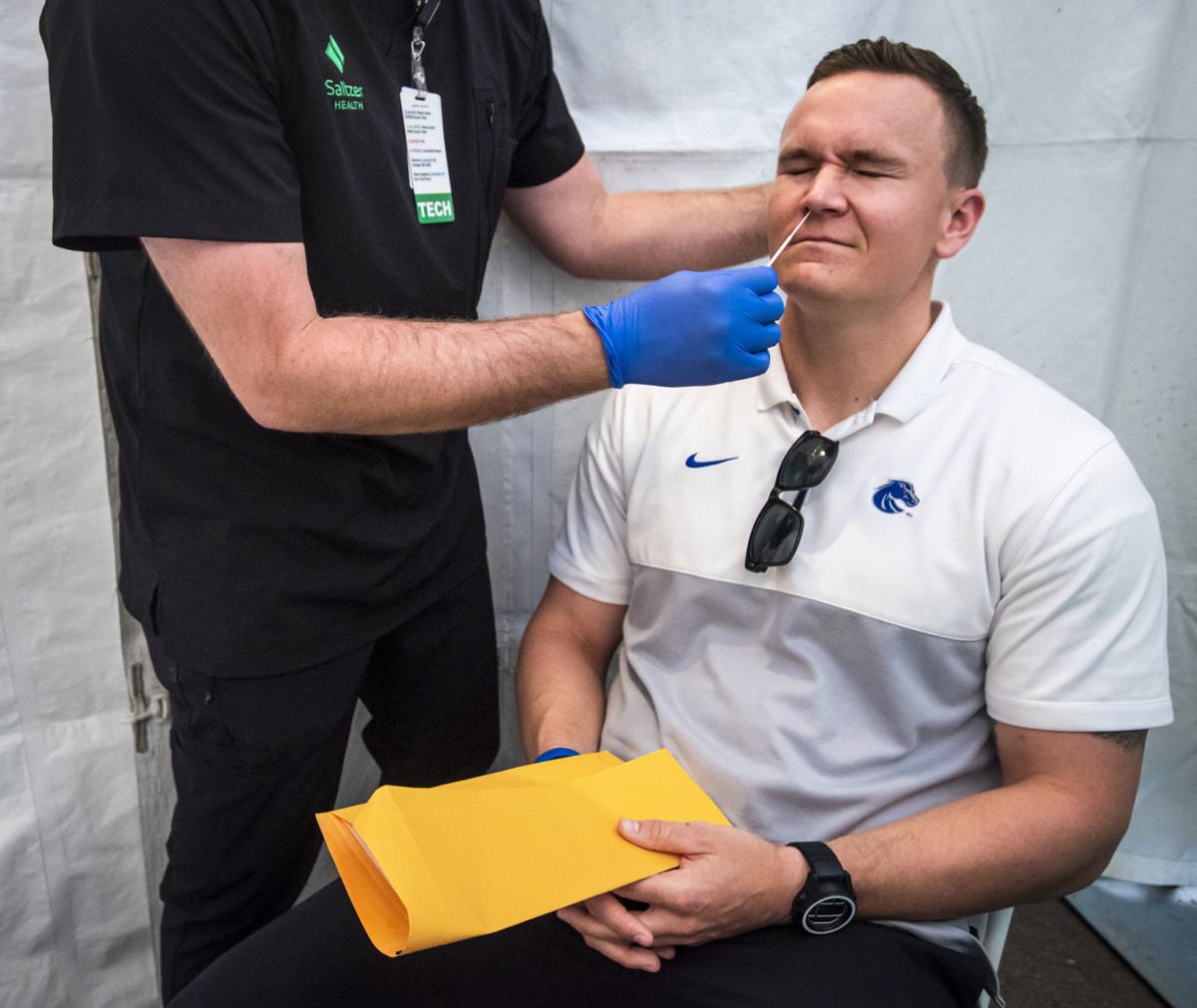 Medical personnel wash and sanitize their hands before going to work at a drive-up testing facility for COVID-19 in the early afternoon on Thursday, April 2, 2020, at Primary Health Medical Group in Nampa.

People stand in line to receive a COVID-19 antibody test on Thursday, April 23, 2020, at a Crush the Curve Idaho testing location in Meridian.

BOISE — A month after Idaho unveiled its strategy for COVID-19 testing, the state is still thousands of tests a week short of its goal to be able to test everyone in priority groups of people, such as health care workers, caregivers at nursing homes and grocery story clerks.

At the end of May, Gov. Brad Little’s coronavirus testing task force released a set of recommendations for testing high-priority groups of Idahoans, which included an end goal of reaching a testing capacity of 150,900 tests per week; no time frame was included for when the end goal should be reached. As of Tuesday, only 9,000 to 10,000 tests are being run a week statewide, according to Idaho Department of Health and Welfare spokeswoman Niki Forbing-Orr.

The state’s testing numbers represent all the nasal swab tests being run by the Idaho Bureau of Laboratories, different medical systems across the state, private labs and the business driven nonprofit Crush the Curve Idaho. It does not include antibody testing, which tests a person’s blood to see if someone was exposed to the virus previously.

The testing task force recommendations laid out five priority groups the state should target for testing and how many tests were required to meet the demand, but there was no plan released at that time to say how the state would get testing to that level. Forbing-Orr said an implementation plan is in the works, but there is no scheduled date for when it will be ready to be released to the public.

“Obviously we would like to get this done as quickly as possible because increasing our testing capacity and doing the contract tracing is critical in slowing the spread,” she said.

In order to test the first two priority groups alone the state’s testing task force would need to run 42,900 tests per week. These two groups include symptomatic health care workers, all residents of long-term care facilities and all inmates and staff at Idaho Department of Correction facilities.

The third priority group includes asymptomatic employees at essential businesses such as grocery stores. This would require another 43,000 tests per week.

Forbing-Orr said the state has roughly doubled its testing capacity since the end of May. To do so, officials sent roughly 30 machines to run tests in small clinics in rural areas across the state and a variety of facilities, including the Department of Correction, to reach areas with lower capacity.

Tina Upson, executive director for Crush the Curve Idaho, was critical of the recommendations from the testing task force because she said it did not outline a strategy for how the state was going to achieve the lofty goals or include certain logistical details, like how often people in each group should be tested.

She also pointed out her concern that because all priority groups were announced at once, there has not been a concerted effort by all groups involved to focus testing on health care workers, long-term care facilities or prison staff and inmates.

“One of our goals is we are (potentially) testing proactive groups four and five, meanwhile we don’t have the capacity as a state to handle just one and two,” Upson said. “We have limited capacity, and we got every priority group called out at one time, and we all treat them like they are all the same. And it’s causing a problem for the most vulnerable.”

Priority groups four and five include asymptomatic people who reside in dormitories, teachers in classrooms with more than 10 students, river rafting guides and athletes who must be tested before they can return to practice.

“Testing by itself, I want to emphasize this point, is not a strategy,” he said. “It’s simply not. It’s one part of a comprehensive strategy that would include education, implementation around good practices around prevention, contact tracing and mitigation of outbreaks. Testing must always be coupled with an action.”