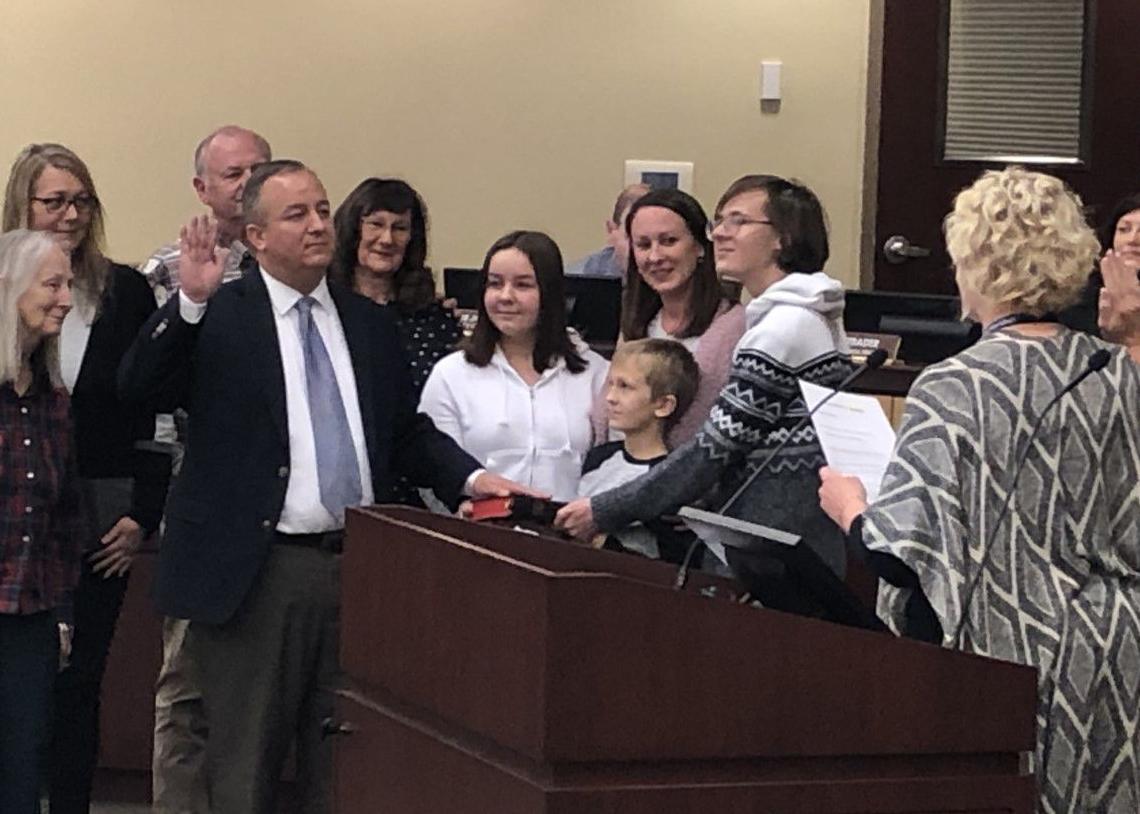 Robert Simison, surrounded by family members takes his oath of office as new mayor of Meridian at a swearing-in ceremony on Tuesday. Simison replaces longtime mayor Tammy De Weerd, who administered the oath.

Robert Simison, surrounded by family members takes his oath of office as new mayor of Meridian at a swearing-in ceremony on Tuesday. Simison replaces longtime mayor Tammy De Weerd, who administered the oath.

There were tears of sadness and joy at the swearing-in ceremony, where new and departing officials thanked their families and friends for their support.

After taking his oath, a visibly emotional Robert Simison, Meridian’s new mayor, thanked his family, including his wife, children, parents, in-laws, uncle and cousin, and especially his sister, of whom he said, “I couldn’t have done this without you, all my life.

“What I heard people talk about this evening, a lot, was family and the role that they play — not only in the lives and decisions we make, but it’s really about the community that we are,” Simison said. “That was the reason why — after many conversations with Mayor Tammy — I made the decision to run ... to keep this community focused on our families.”

Simison replaces Tammy de Weerd, who served as Meridian’s mayor for 16 years. She announced early last year she would not seek a fifth term.

Simison served as De Weerd’s chief of staff for 12 years before winning a November election among a field of five mayoral candidates. Simison campaigned on his city government experience and know-how to provide quality city services.

On Tuesday, Simison said he stands on the shoulders of Meridian’s recent leaders, such as De Weerd and Keith Bird, a longtime city councilman who died last year. Past leaders set the city’s standards for decorum and cooperation, Simison said, which he hopes to emulate.

“I like to think that I learned from a dream team — the greats,” he said.

Meridian’s mayor has the second-highest salary of cities in the Treasure Valley, behind Boise, which pays its mayor about $145,000 annually.

“OK, you have an emotional mayor,” she said. “Family is what our community is about. It was a purposeful vision that we set 16 years ago to focus on family, to focus on youth, to focus on reengaging our faith community and to focus on bringing family-wage jobs so that our community was full service and we could live, work and raise our family right here in Meridian. And, folks, we did it, and we did it by working together.

“I’m excited for the future, and I’m excited for our newly elected officials that have shown such great passion for our community and such grit and determination that is going to be needed as we enter this next chapter, this new decade for Meridian.”

Three new city council members took oaths of office Tuesday. They take over for three council members who each chose not to seek another term prior to the November election.

Strader works in real estate and finance — experience, she said while campaigning, that can help Meridian manage growth.

“The gravity and the specialness of this day are very heavy for me and very meaningful,” Strader said Tuesday after taking her oath. “I would just like to thank all of the voters who participated in our process.”

Brad Hoaglun, a former Meridian City Council member who ceded his seat in 2013 due to a work conflict, is back on the council.

Hoaglun joked Tuesday about the moment he told his mother he would be running, again, for city council.

“You need to have your head examined,” his mother responded.

Hoaglun said he decided to rejoin the council because of his adult children and grandchildren, who live in Meridian.

“It’s a great community,” he said. “It has changed tremendously, but, at the same time, there are great things about this community, and that’s what we want to keep. We want to keep our sense of community, no matter our size.”

Hoaglun replaces Councilman Ty Palmer, who served one term on the council. Palmer told the Meridian Press last year he would not seek reelection so he could spend more time with his family.

On Tuesday, Palmer quoted a religious scripture, which says, “It is the nature and disposition of almost all men” when they attain authority, “they will immediately begin to exercise unrighteous dominion.”

“From the moment I was sworn in, I walked into every city council meeting and every budget hearing and especially every meeting I had with a constituent with that verse in mind, ringing in my ears, determined to not fall into the ‘almost all men’ that’s referenced in that verse,” Palmer said. “I’ll walk out that door tonight, with my family, knowing that there’s not one moment of my service here for which they should be ashamed. Here, in a moment, their opinion will be the only one that matters to me, and I’m looking forward to spending much more time with them.”

Jessica Perreault, a local real estate broker and most recent chairwoman of the Meridian Planning and Zoning Commission, replaces Councilwoman Genesis Milam, who served on the council since 2014.

Perreault, after taking her oath, thanked city staff for “faithfully” serving the city and said she is impressed with the staff’s “commitment, dedication and attitude.”

“I’m excited to serve with you,” she said.

The council on Tuesday unanimously selected Councilman Treg Bernt as president and Hoaglun as vice president.