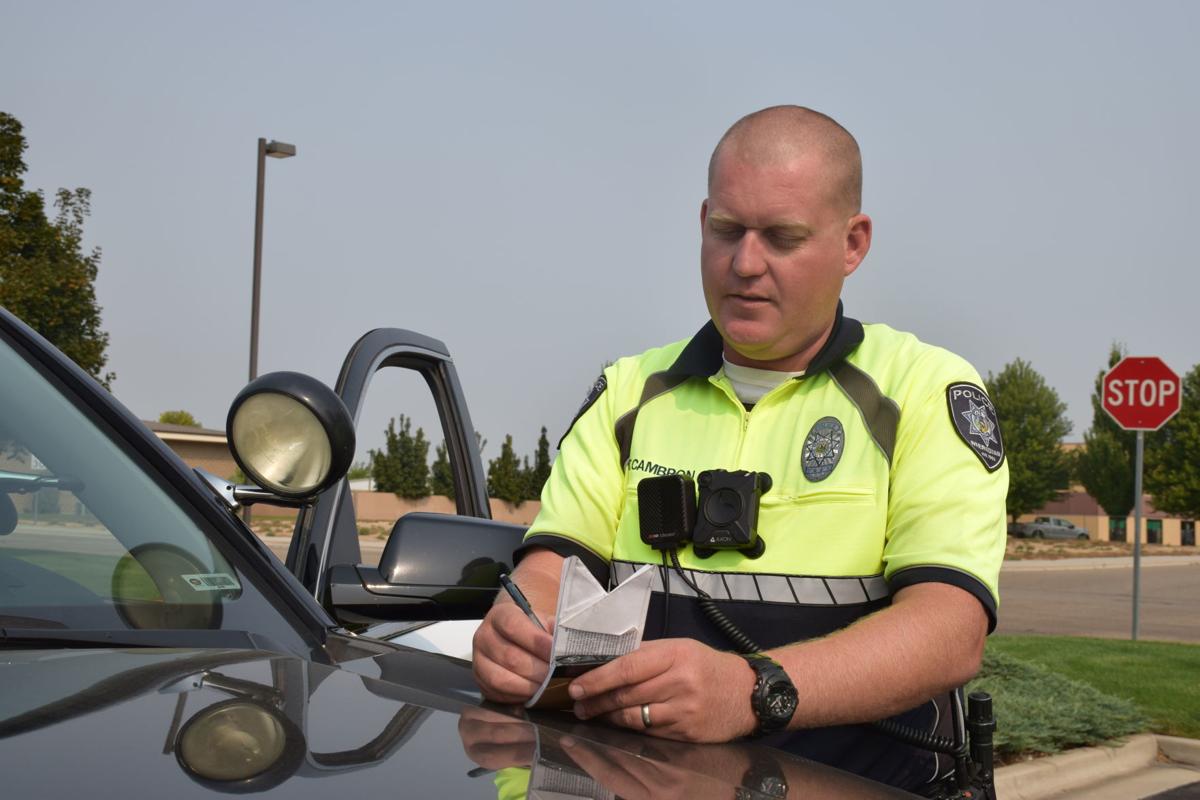 Meridian police officer T.J. Cambron writes a note on the hood of his car on Aug. 24. 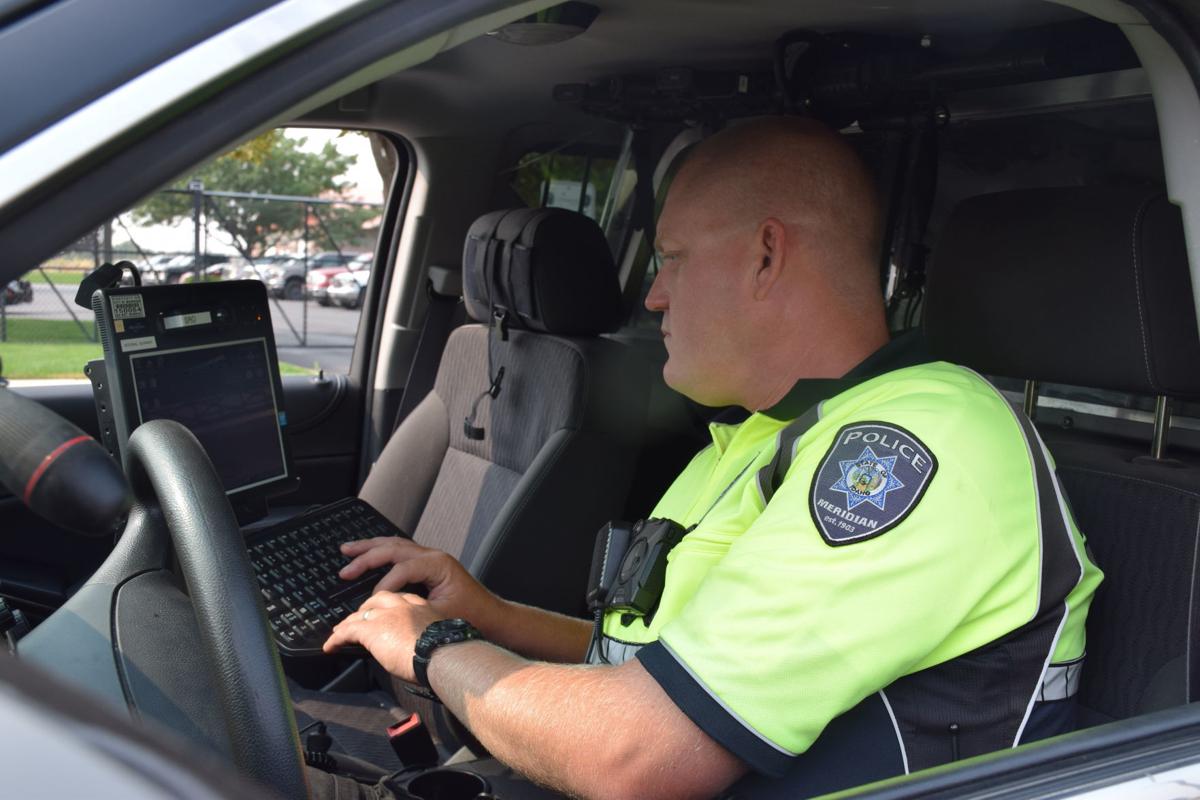 Meridian police officer T.J. Cambron looks up information on the computer in his patrol car Aug. 24. 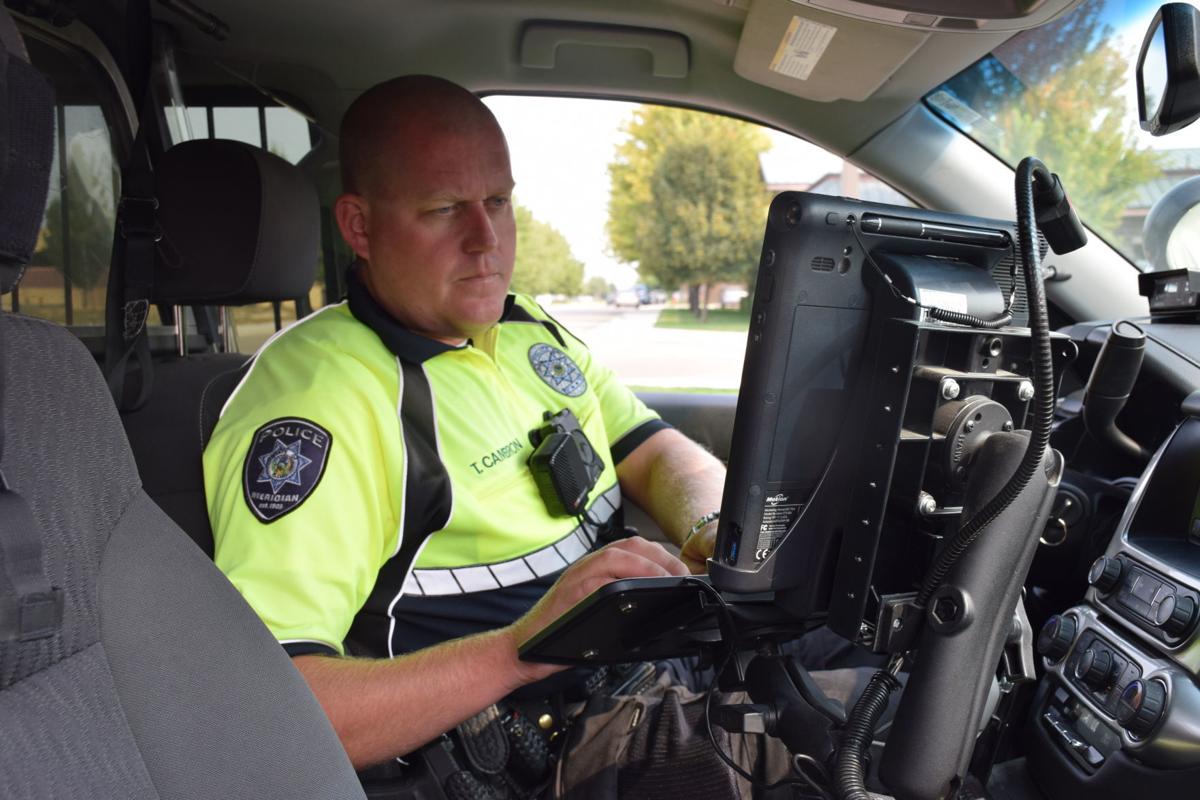 This file photo, taken Aug. 24, 2018, shows Meridian police officer T.J. Cambron looks up information on the computer in his car.

Meridian police officer T.J. Cambron writes a note on the hood of his car on Aug. 24.

Meridian police officer T.J. Cambron looks up information on the computer in his patrol car Aug. 24.

This file photo, taken Aug. 24, 2018, shows Meridian police officer T.J. Cambron looks up information on the computer in his car.

When residents spot a car pulled over by a Meridian police officer, chances are the driver doesn’t live in Meridian.

Being in the center of the Treasure Valley means Meridian experiences outside traffic coming in from all sides. Roughly 60 percent of all traffic citations and 50 percent of all driving under the influence charges issued in Meridian are for residents of other cities — largely Boise and Nampa.

Meridian city and police officials believe Meridian’s centrality and the city’s “pull” are the main reasons so many of Meridian’s traffic citations and DUIs are given out to residents of other cities.

Other Treasure Valley officials attribute the statistics to drivers commuting through Meridian.

Meridian Deputy Police Chief Tracy Basterrechea said drivers commuting across the valley using Interstate 84 aren’t the cause for the high number of non-resident citations because the Meridian Police Department rarely patrols on I-84, which is generally managed by the Idaho State Police.

Those highways “funnel a lot of commuters and inter-city traffic to Meridian,” said Nicole Du Bois, spokeswoman for the Ada County Highway District.

“Likewise for non-commute trips that may be passing through or bound for a destination like The Village,” Du Bois said.

This data is an indicator of Meridian’s “pull,” according to Basterrechea. He said over the past couple of decades jobs, retailers and businesses have grown in Meridian, providing people with a reason to visit.

“It goes to say, we are a destination, we’re really not a bedroom community anymore,” he said. “A lot of people come here for their jobs and enjoy the other things.”

Robert Simison, chief of staff for the Meridian mayor’s office, said the traffic flow into Meridian creates more opportunities for growth, but it also means managing traffic has become an important conversation for the community.

“All roads lead to or go through Meridian,” said Simison.

He said in the future, agencies like the Idaho Transportation Department, the Ada County Highway District and the city of Meridian will need to continue to work together to alleviate problem areas in the community.

Most of the revenue from traffic citations and fines goes to the issuing city.

Ninety percent of funds from fines for speeding, DUI charges or violating state driving privileges go to the city whose officer made the arrest or issued the citation, according to Michelle Crist-Aguiar, director of finance and operations for the Idaho Supreme Court.

Basterrechea said those funds — which make up a fraction of the total court revenue that Meridian receives from the Ada County courts — don’t cover the cost of patrolling a growing Meridian.

That money is used how the city sees fit and does not necessarily come back to the police department, Basterrechea said.

Patty Bowen is the Meridian Press reporter. You can reach her at pbowen@idahopress.com.