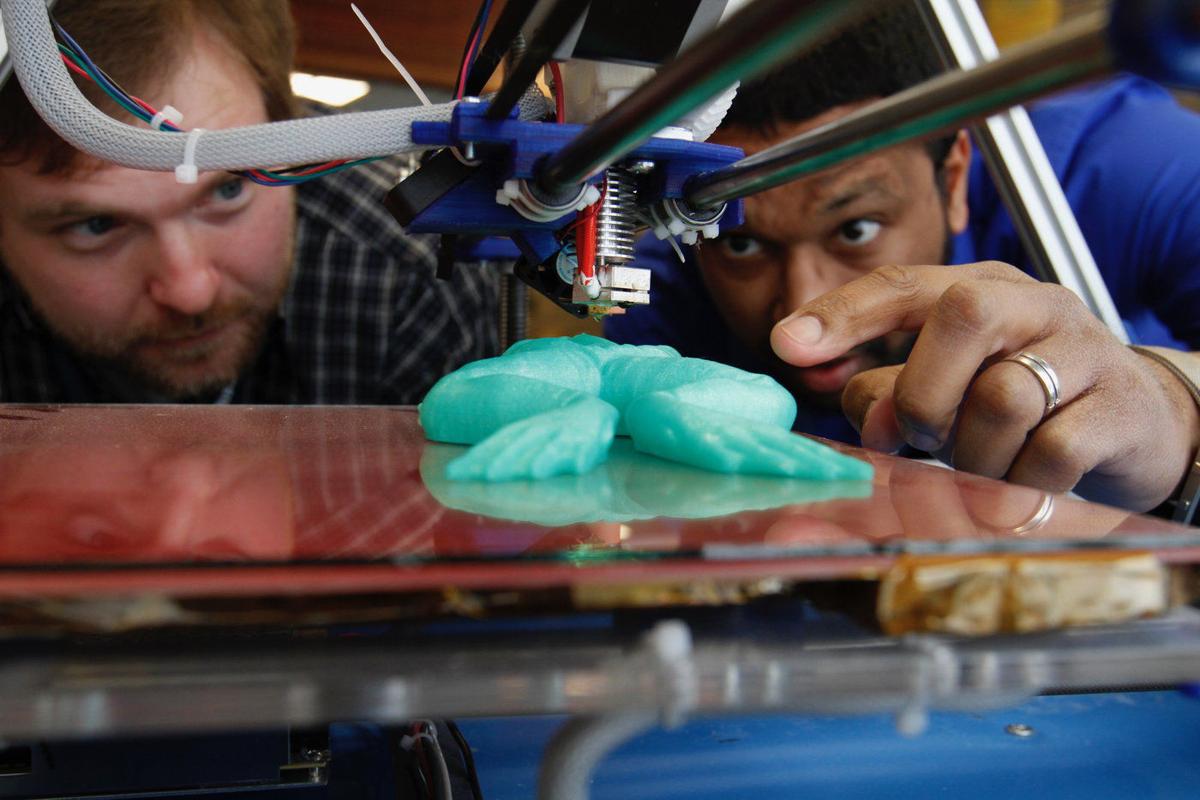 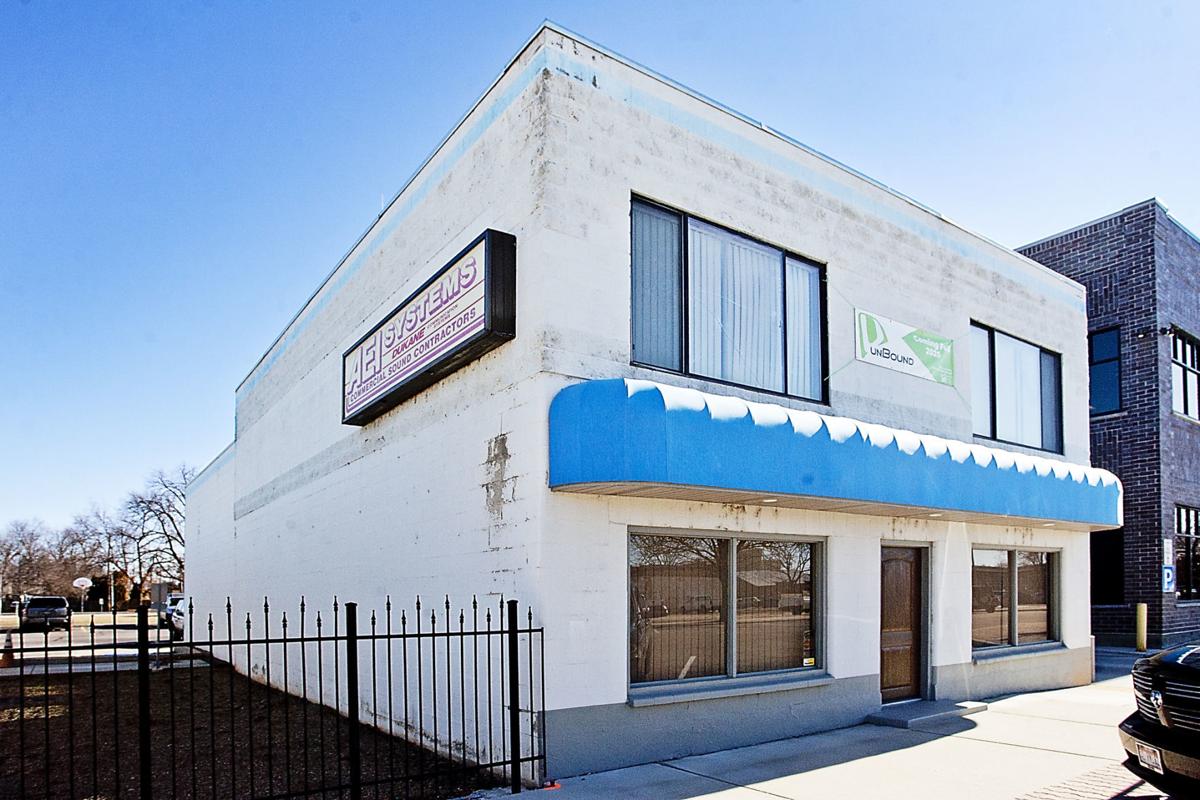 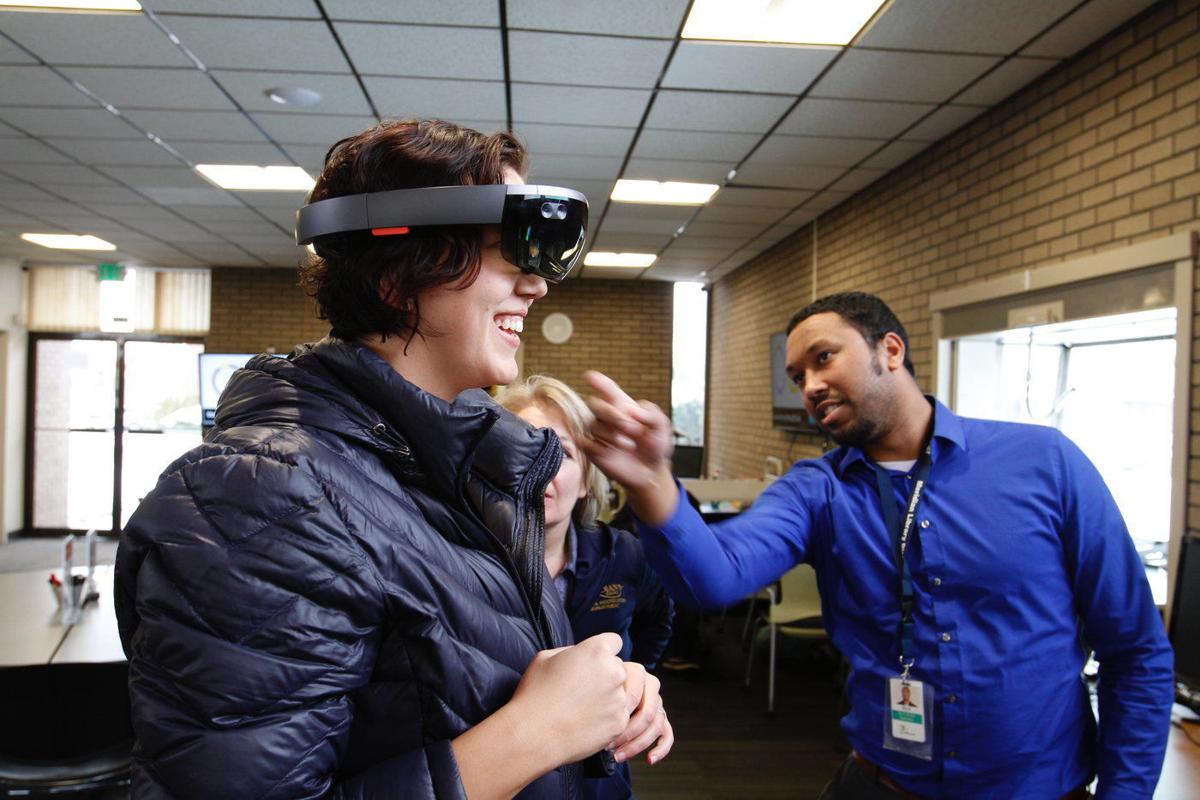 Nick Grove, tech library supervisor for the unBound library branch, teaches a patron how to use a virtual-reality headset last year. The Meridian Library District’s tech branch reopen in a new downtown location at 722 E. Second St. after renovations. 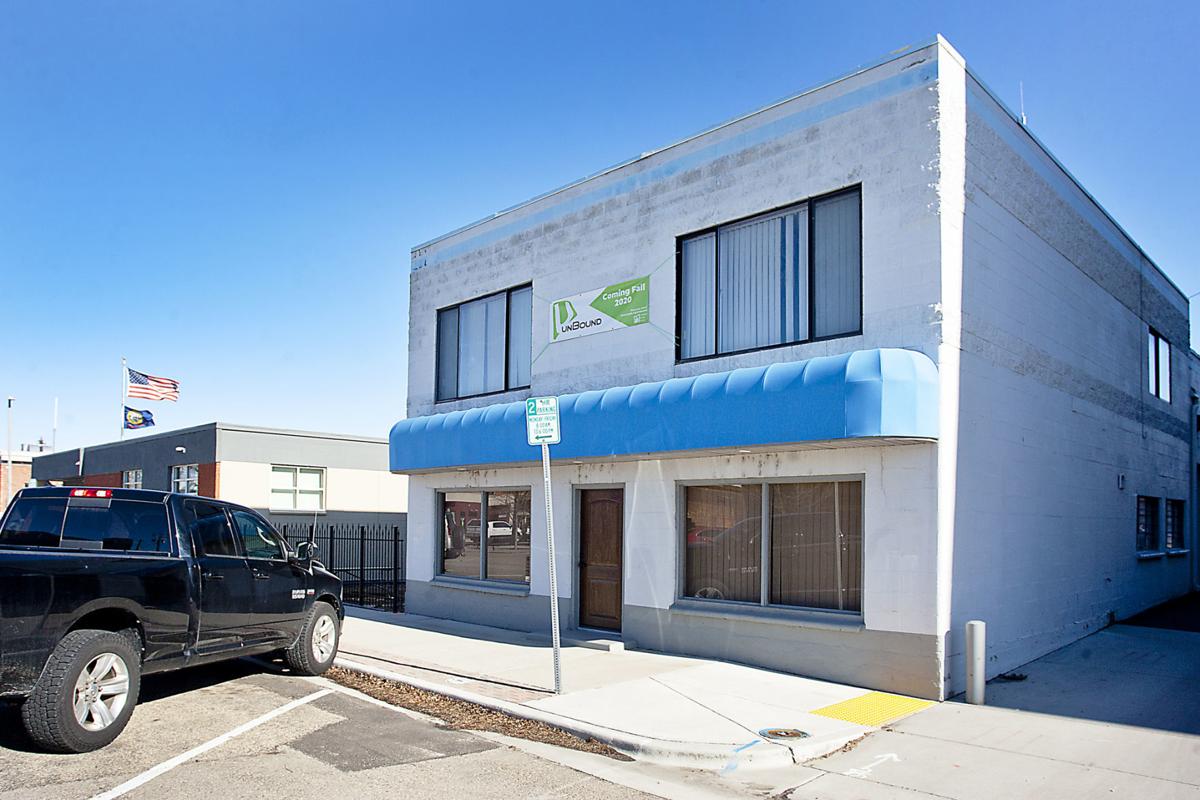 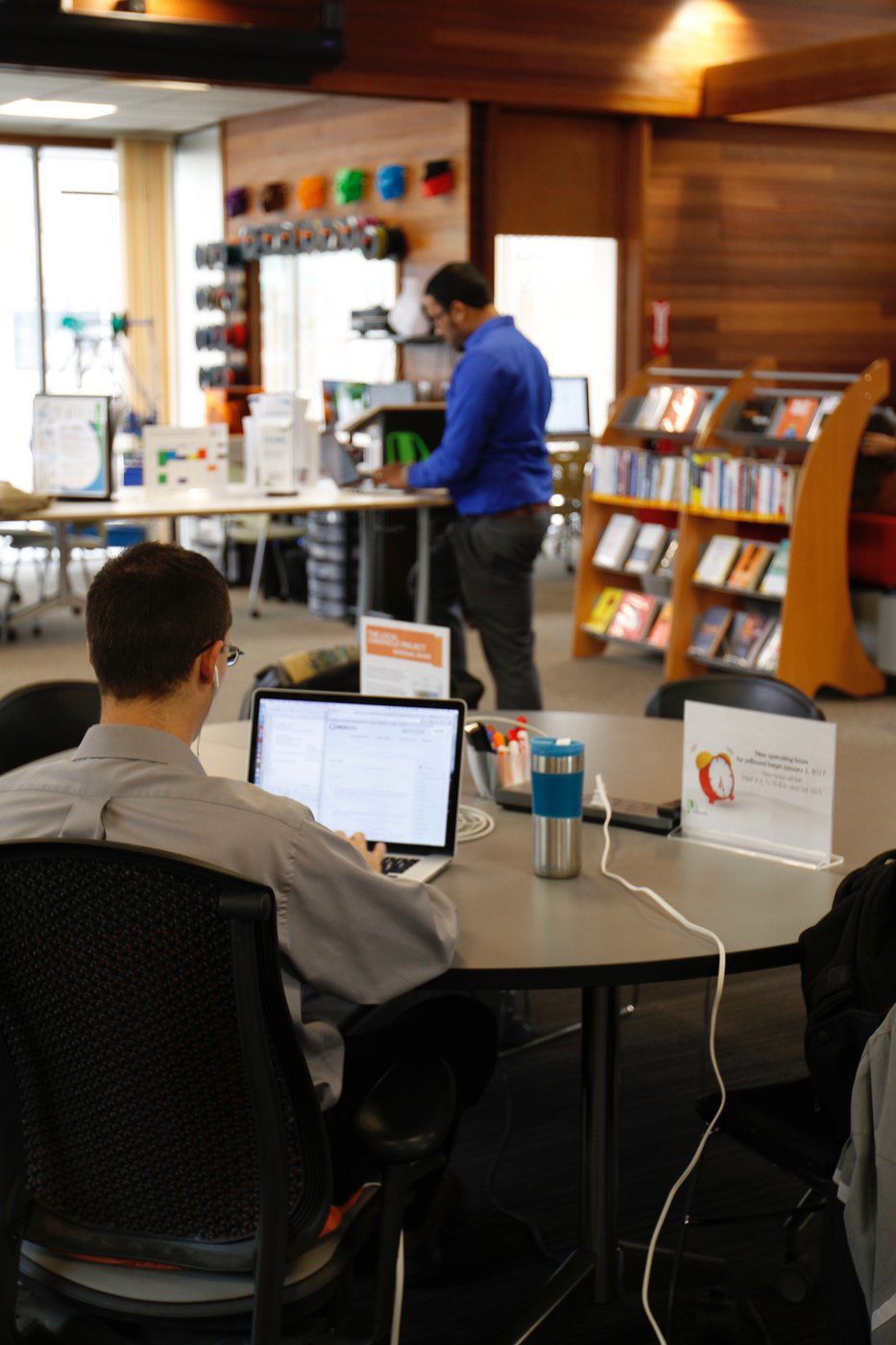 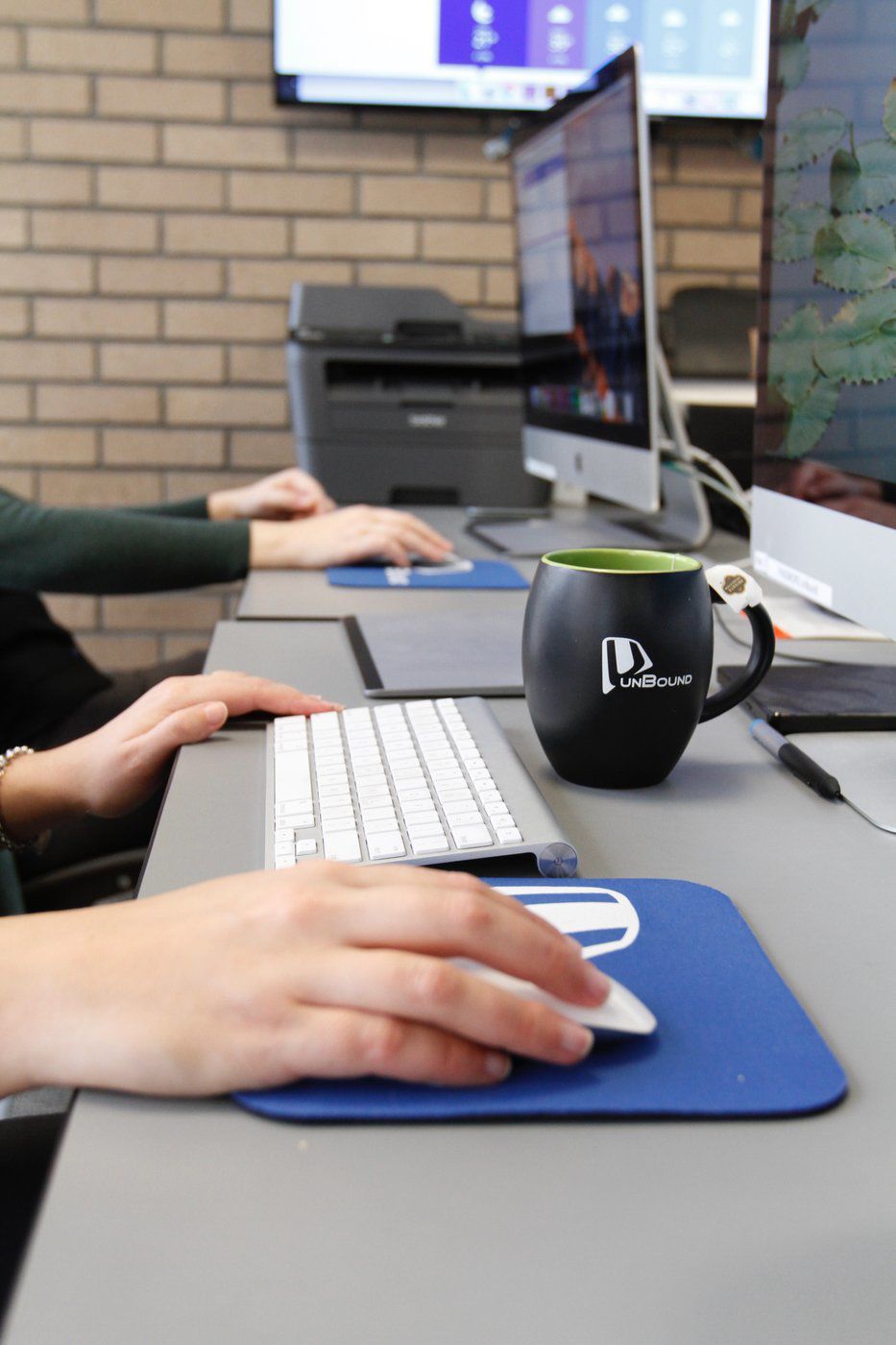 The unBound library branch’s former location was at 713 N. Main St. Lofts, offices and retail space are now under construction at the site, and unBound plans to reopen a few blocks away at 722 E. Second St. after renovations.

The Meridian Library District’s former unBound branch on North Main Street had a sound studio, which patrons can expect to see at the new location when it opens at 722 E. Second St. after renovations. 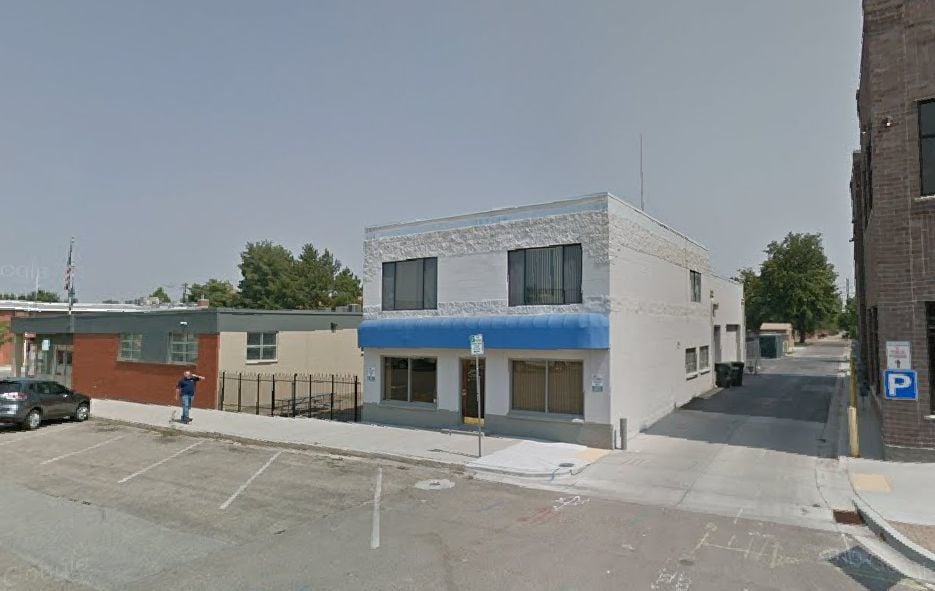 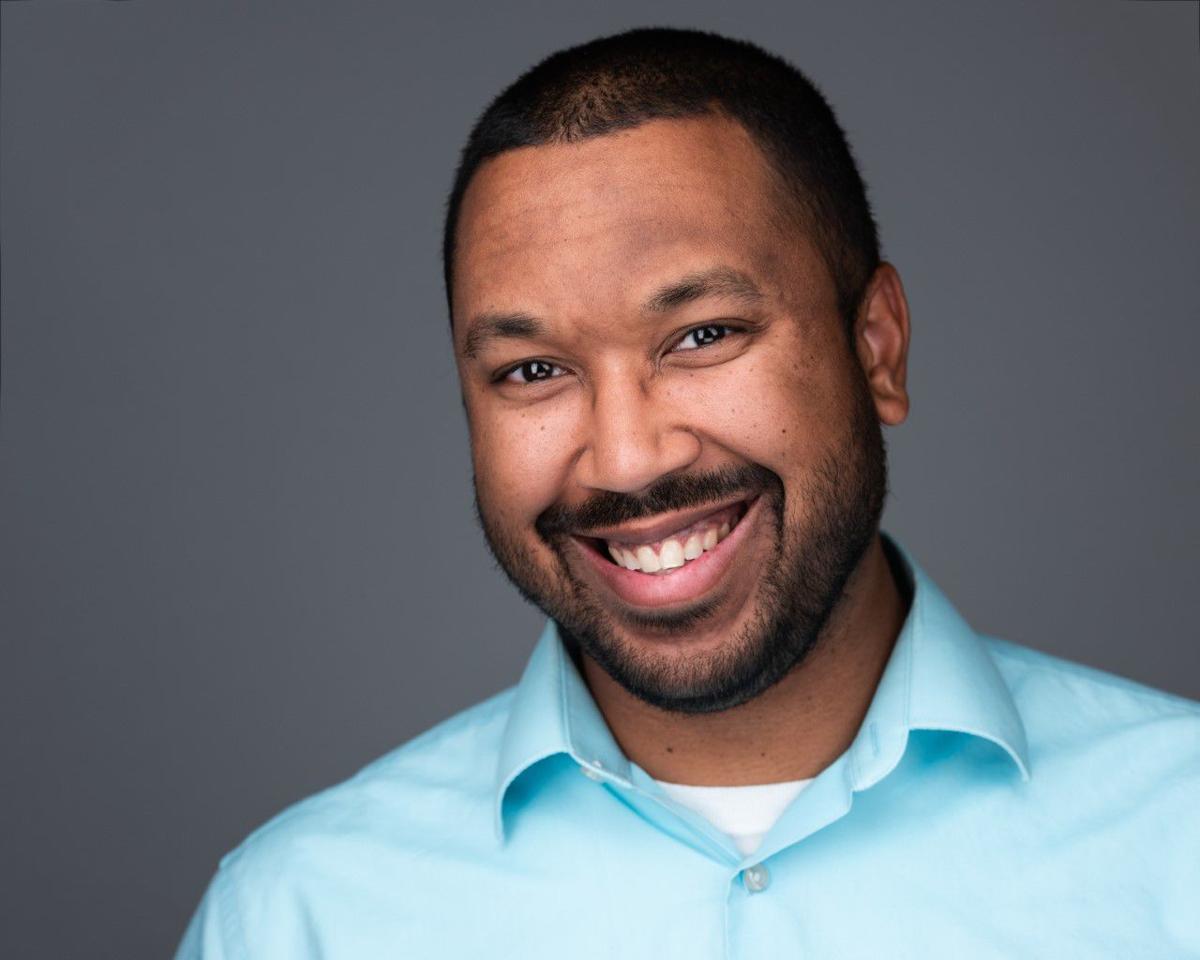 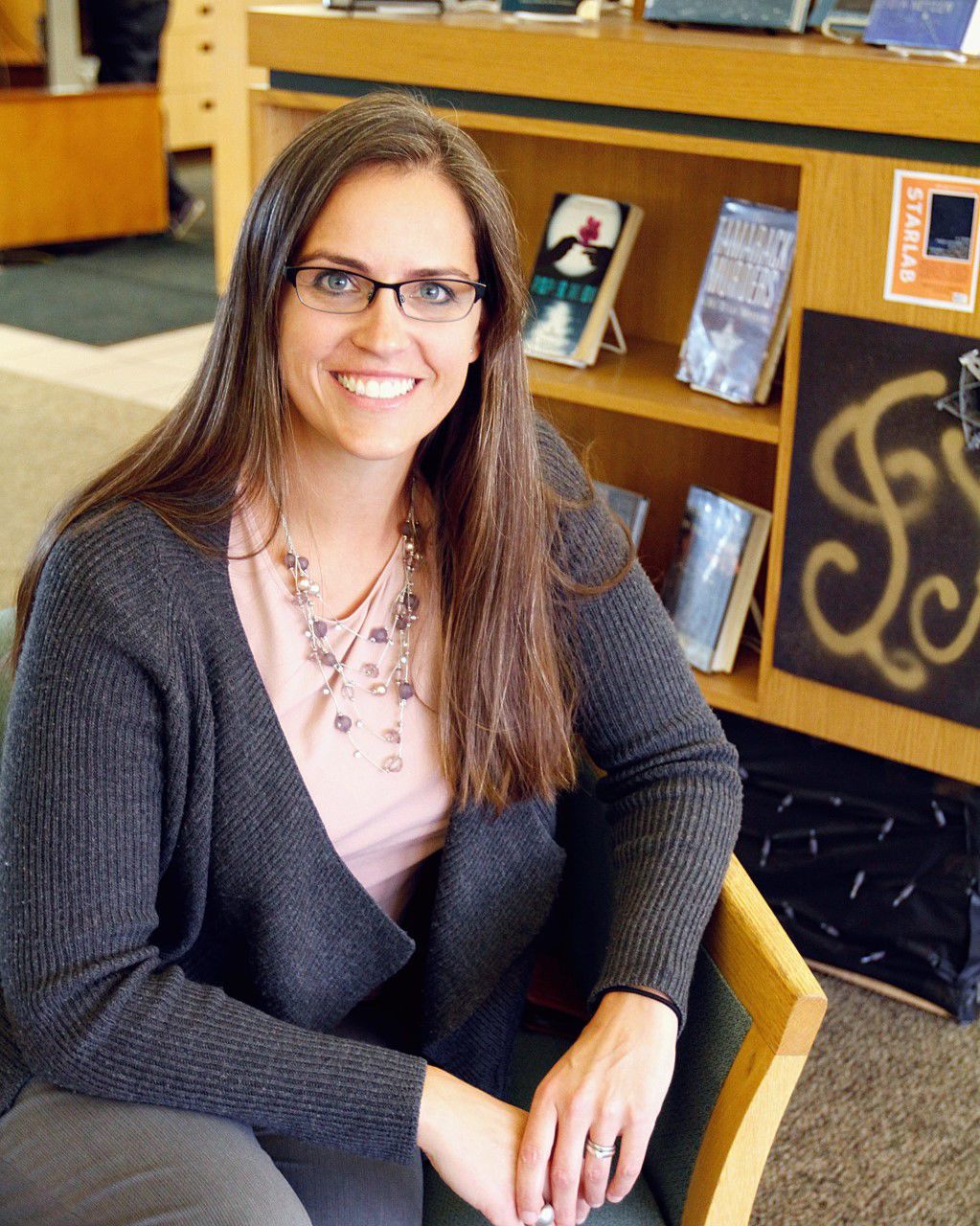 Nick Grove, tech library supervisor for the unBound library branch, teaches a patron how to use a virtual-reality headset last year. The Meridian Library District’s tech branch reopen in a new downtown location at 722 E. Second St. after renovations.

The unBound library branch’s former location was at 713 N. Main St. Lofts, offices and retail space are now under construction at the site, and unBound plans to reopen a few blocks away at 722 E. Second St. after renovations.

The Meridian Library District’s former unBound branch on North Main Street had a sound studio, which patrons can expect to see at the new location when it opens at 722 E. Second St. after renovations.

MERIDIAN — For the last year, Meridian’s technology-focused library branch, unBound, has been squeezed into a small space in the library district’s main branch on Cherry Lane.

District officials have dubbed the cramped, L-shaped corner of the library — which features a few iMac computers, 3D printers, a large-format printer and laminating machine and a few couches — “unBound Lite.” Library staff and its patrons are making due with the space until renovations on a new downtown branch are completed this fall.

Between October 2015 to February 2019, unBound existed in the former Farmers and Merchants Bank building near Meridian City Hall. When the building changed ownership and was scheduled for demolition last year, unBound had to relocate. In April 2019, the library district announced it had found new digs for unBound — the former AEI Systems Group building, around the corner from unBound’s former location.

Renovations will take four to five months. In the meantime, the district continues to offer technology assistance and use of equipment — the 3D printers are running almost nonstop — but district officials are anxious to move out of the Cherry Lane branch and spread out in their new, permanent home in Meridian’s city center.

“We developed relationships with the community while we were down there those three and a half years,” said Nick Grove, the Meridian Library District’s technology supervisor and unBound branch manager. “There’s a call for us to be back and have that presence … providing those services and having that space available in downtown.”

UnBound is a “technology library,” where patrons can experiment with emerging technology, attend classes and hold meetings. It’s geared toward entrepreneurs, small-business owners and tech-savvy millennials. Patrons can learn a new computer program, get advice on small business marketing or create things for their business.

One middle-schooler recently had fidget spinners 3D printed so she could “hustle for some cash,” said Gretchen Caserotti, director of the Meridian Library District. Another group elevated the production of their amateur podcast using unBound’s sound studio.

Branch staff — about half a dozen people — are experienced with unBound’s technology and equipment and can provide help. If they aren’t experienced, they’ll learn alongside patrons seeking help, Caserotti said.

“While the perception of libraries is books are our brand, librarians are often early adopters of technology, and technology is the vehicle through which information is accessed in a modern time,” Caserotti said.

UnBound got started in a flash. In early 2015, an opportunity arose for the library district to lease a space in the Farmers and Merchants Building, which was owned by the Meridian Development Corporation, or MDC, the city’s urban renewal agency. By that time, Caserotti, Grove and other library district officials already were knee-deep in researching “makerspaces,” technology-focused spaces where library patrons can create things and learn new skills.

The Meridian Library District borrowed some of the best ideas for its project — librarians borrow, they don’t steal, Caserotti said.

“We chose different aspects of all three of those, to make a very unique library setting that is not duplicated anywhere else that I’ve really come across,” said Grove, who in 2015 was named a “Mover and Shaker” in the library industry by the national publication, Library Journal, for his commitment to the industry and innovative use of technology.

The library district had the ideas in place and most of the equipment for unBound, just not the space — which, for the library, is difficult to come by. Then MDC offered the downtown location for $1 per month. Less than a year later, unBound was up and running.

The Farmers and Merchants Building was never meant to be a permanent location, Caserotti said. So, in 2019, when MDC sold the downtown property to a local developer who is now building lofts, offices and shops there, Caserotti told unBound patrons not to panic.

In April, the library district paid $415,000 for the former home of AEI Systems Group, a 3,800-square-foot, two-story building at 722 E. Second St. The following month, the district asked Meridian residents for a $14 million, 10-year facility levy, which would fund several library projects, including renovations on the new building. The levy passed with about two-thirds of the vote.

The district set aside $1 million from the levy for the unBound renovation, but the total cost of renovation has yet to be finalized, Caserotti said.

Caserotti describes unBound as a sort of library “outpost.” It’s a concept she inherited from a former colleague in the New York Public Library system, where she worked prior to Meridian.

The real estate market changes, and funding for large projects, such as a new library, is slippery (two library bond measures in the last four years have failed in Meridian). Instead of investing capital on large projects, library districts should be “nimble,” Caserotti said, taking what they can get in terms of space.

“‘Lighter, quicker, cheaper’ became our motto for this project,” she said of unBound.

UnBound will not, technically, be a full-service library branch. Library patrons can request a book to pick up there, and it will have a small collection of business and technology-oriented books, but the space is meant to house equipment, services and programs — which are open to anyone, not just library card holders.

Just being downtown is important for the Meridian Library District, Caserotti said. While it can’t have a full-service downtown branch — “Someone might say, ‘Why don’t you just put a main library downtown?’ and to that I would say, ‘With what money, and where?’” Caserotti said — having a library presence means access to library services in the city’s core.

“Certainly, in today’s environment, there’s a lot of energy and passion around revitalizing downtown,” Caserotti said. “I think it’s important that the library be present and contributing to that revitalization. That is exciting to be able to be in the middle of it and to be involved in it.

“I’m really proud of the way we have found ways to do this that I think do meet those requirements — to have a presence downtown to do something that’s innovative and contributing without having to say, ‘Well, let’s start a 50-year planning process to build a new library that’s going to cost a ton of money.’”

The new unBound building is in the design stage, and Caserotti hopes renovations will begin this spring.

Prior to opening this fall, Grove said he’s working to identify what the community needs in terms of education and other resources. The branch will have the same equipment and services as the old branch — 3D printing, Adobe Creative Suite, a sound studio, meeting space, etc. — but Grove said he hopes the library can collaborate with local agencies to create programs to benefit local businesses and workers.

Classes at unBound could be “how to write a business plan, how to market your business,” Caserotti said.

“Are you interested in eCommerce? Do you know about copyrights and trademarks?” she said. “What do they need to help their small or midsize business succeed? I’d love to invite the community to give us some feedback and ideas on what kind of programs they’d like to see (and) what services they would like to see.”

As part of its outreach efforts, the district has released a survey asking library patrons for feedback on unBound as well as the library’s services at other branches.

To take the survey, visit surveymonkey.com/r/MLDcommunity or visit a library branch. The survey will remain open until Feb. 15.

As part of its outreach efforts, the Meridian Library District has released a survey asking library patrons for feedback on unBound as well as the library's services at other branches.

To take the survey, visit surveymonkey.com/r/MLDcommunity or visit a library branch. The survey will remain open until Feb. 15.