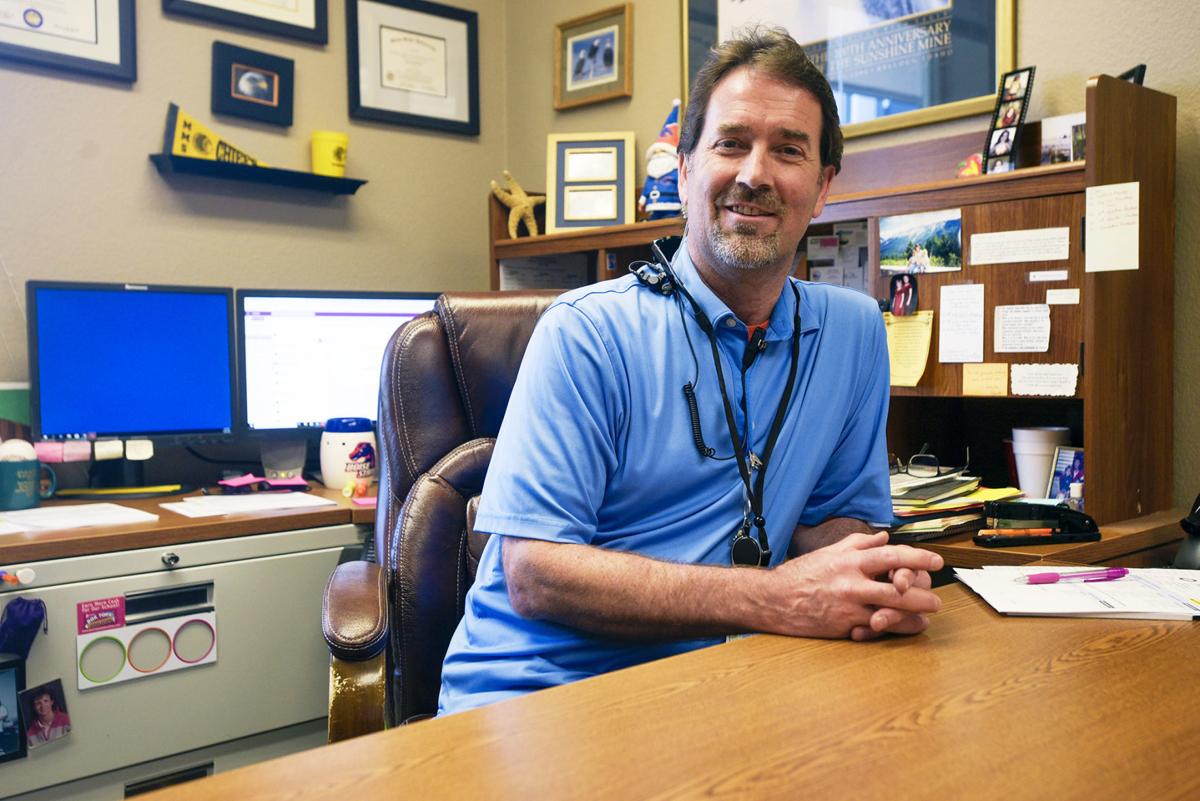 Kevin Roberts poses for a photo in his office at Meridian Middle School on Tuesday, May 26, 2020. 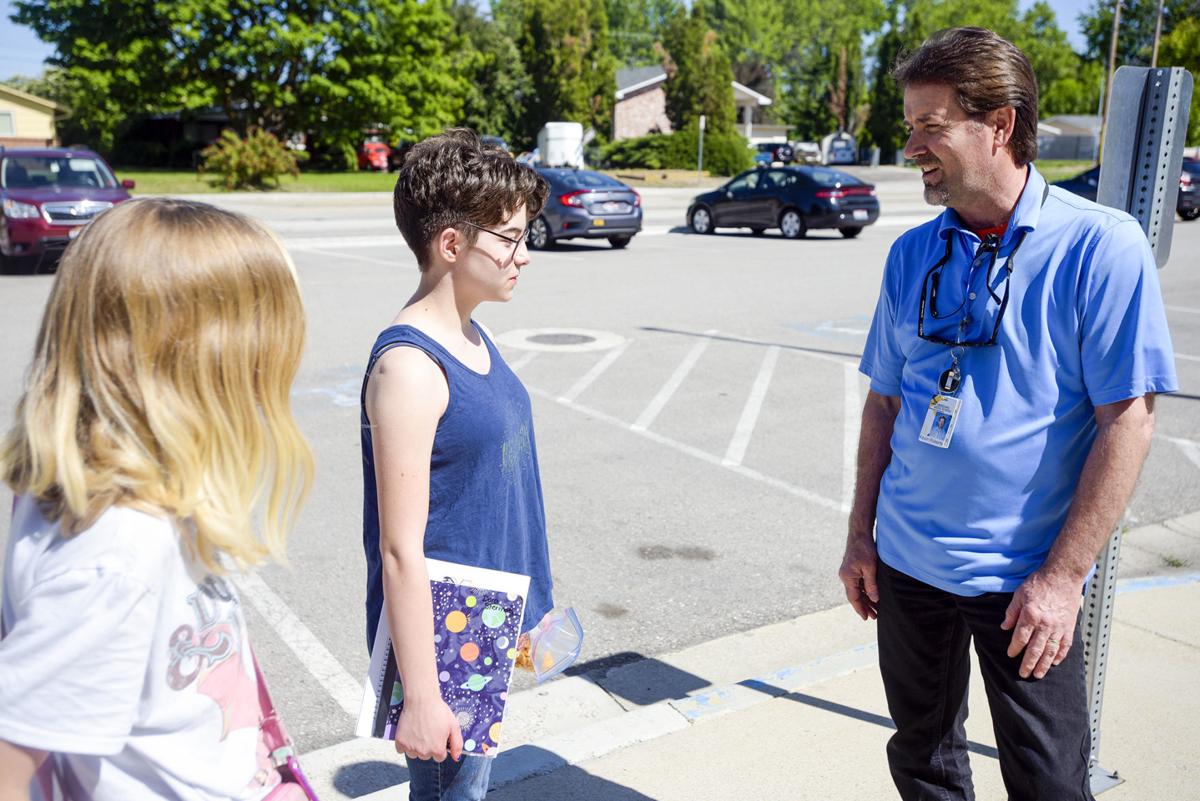 Kevin Roberts, right, speaks with students outside of Meridian Middle School on Tuesday, May 26, 2020.

Kevin Roberts poses for a photo in his office at Meridian Middle School on Tuesday, May 26, 2020.

Kevin Roberts, right, speaks with students outside of Meridian Middle School on Tuesday, May 26, 2020.

MERIDIAN — After 36 years as a teacher and administrator in Meridian schools, Kevin Roberts summarizes his approach to education in one phrase: I’m on your side. The wording has changed over the years — he credits his sister, also a teacher, with the most recent iteration — but the idea has been the same.

“I just tell kids, even if they’re in trouble and their day is not going well … ‘Hey, when I come talk to you, I’m on your side,” Roberts said. “’If we’re talking about something that’s difficult, you can count on the fact that I believe in you. We’re going to get through this, and we’re going to grow together.’

“That phrase has changed the way I operate,” he said.

Roberts, 61, is retiring this year, ending a nearly four-decade career, first as a teacher, then an assistant principal at Meridian Middle School, primarily working with sixth-graders. Being an administrator, Roberts told the Meridian Press, is about teaching life lessons, and, in the end, a career in education is “so much about the people you work with.”

Although he graduated from high school in Kellogg, a small town in North Idaho, Roberts lived on West Fourth Street, less than half a mile from Meridian Middle School, for most of his childhood. His parents were preachers who taught their kids to contribute to their community. Of the five Roberts children, four became educators and one became a preacher.

“Give us a job where we have something to say, and we do pretty well,” Roberts said.

Meridian Middle School has two gymnasiums, both named after former teachers: Wes Lowe and Bill Berg. Both men taught a young Kevin Roberts. As a ninth-grader Roberts interviewed Lowe — who was his neighbor — for an assignment in English class. Roberts thought teaching might make an enjoyable career.

“I could see myself doing his job, a job he did with passion, a job that gave him an opportunity to influence the lives of young people, a job he loved,” Roberts recently wrote in a letter announcing his retirement.

Reminiscing on a fruitful career, Roberts largely credits his mentors, Lowe, Berg and Bob Stinson. Stinson was a longtime assistant principal at Meridian Middle School (formerly Meridian Junior High), and before that he was Roberts’ driver’s education teacher.

Starting in 1982 as an athletic trainer and substitute teacher, Roberts worked for 17 years in the classroom — at Meridian Middle School and Centennial High School. In 2001, he applied for his first administrative job: assistant principal at Meridian Middle School. He was turned down, and a teacher from another school, Lisa Austin, was hired instead. Later that semester, however, Roberts was promoted to work alongside Austin, filling a position vacated by his former teacher, Stinson.

Roberts has worked alongside Austin for half his career. In 2006, Austin was named Meridian Middle School’s principal. “I knew from day one that she was the right person for that job,” Roberts said.

“I sleep really well with the headache that I have, and I don’t need any more,” Roberts said. “I’m a good number two, and I like supporting someone else. I have a really important spot being (Austin’s) right-hand man.”

“He’s so great with kids,” Austin said of Roberts. “He really does an amazing job helping those elementary kids transition successfully, or as successfully as possible, into middle school. He is all about establishing good relationships. It’s more about the teaching and learning than it is about being a tough disciplinarian, which is oftentimes the expected role of an assistant principal.”

Roberts takes the disciplinarian role when necessary, but “it’s always with a long conversation and suggestions for how each student can can do better next time,” Austin said. “And a lot of forgiveness, a lot of acceptance, a lot of guidance.”

Roberts said being an assistant principal is about teaching life skills, such as accountability, responsibility, honesty and grace.

“So much of what we do in school is about creating positive relationships with kids and letting them know that we care about them,” he said. “Some days are hard when you’re 11, and you don’t get it. Just stick to it and always do your best.”

Roberts said he and Austin have been “relentless” in their “I’m on your side” approach.

Austin said she expects to see Roberts sneaking on campus in the fall, to complete some of the tasks most people didn’t know he did, such as painting the lines on the field so kids can play football.

“It’s going to be hard to continue on without him,” she said. “But he’s certainly made his mark on this school.”

Retirement will free up time for Roberts to visit his newly married daughters, who live out-of-state and may benefit from a mentor in their young teaching careers.

‘YOU HOPE YOU’VE MADE A DIFFERENCE’

Meridian has grown and changed since Roberts first started teaching. The students haven’t changed much — although “because I said so” doesn’t pack as much punch as it used to — but home life is growing increasingly tough for kids, Roberts said.

“The broken homes, the kids who don’t have a mom and dad, I think there’s probably more of that now than there was there was then,” he said.

Roberts said it can be challenging as an administrator to show students that you care for them, that you’re on their side.

“But I think that’s part of the challenge that I enjoy,” he said. “Honestly, some of the toughest kids are my favorite kids. You can really sit down and and have serious conversations with them.”

When he interviewed Lowe for his ninth-grade career project, Roberts thought Lowe was “having a good time” being a teacher, and that’s why he decided to try it for himself. Decades later, when Roberts was asked whether a teaching career was everything he expected it to be, he paused for several seconds and began to cry.

“Yeah,” he said. “You know the old phrase … ‘If you find a job you love, you’ll never work a day in your life.’ There’s been hard days, but just loving on kids and helping teachers get better at what they do, you hope you’ve made a difference, and you just never know. But you go back every day, and you believe in what you’re doing, you believe in kids, believe in families and know that they need help. They reach out to us and we do the best we can to get there.

“So I think it’s turned out to be more than I imagined,” he said.