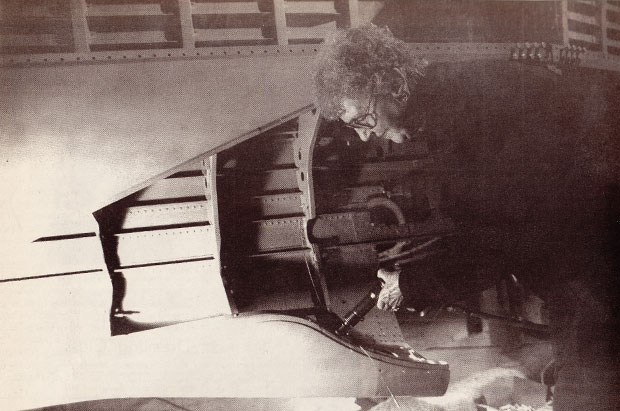 Ruth Glover, of Nampa, tries her hand at riveting on the wing of a P-51 fighter plane at the Warhawk Air Museum in Caldwell. She bucked rivets on the first B-29 bomber plane ever produced during World War II. 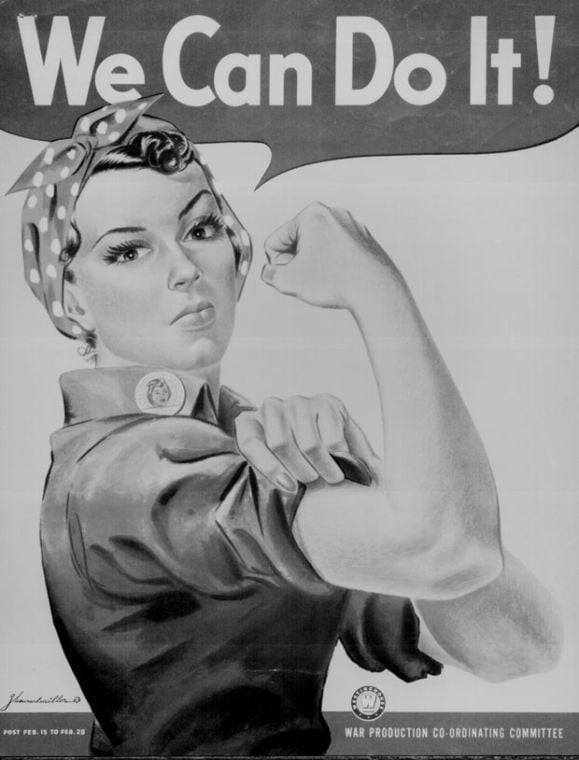 Ruth Glover, of Nampa, tries her hand at riveting on the wing of a P-51 fighter plane at the Warhawk Air Museum in Caldwell. She bucked rivets on the first B-29 bomber plane ever produced during World War II.

Like generations of women before them, they had depended on others for survival, untempted by their limited vocational options. Until then, working women had scarcely been entrusted with sales receipts and typewriters.

But as the demand for workers of any kind grew increasingly desperate in 1941, they joined more than 6 million other women in the airﬁelds and shipyards that churned out Allied machines of war.

They tied their hair up in handkerchiefs, strapped on tool belts, deciphered blueprints and manned rivet guns. These women made the war go.

Certainly, the air and sea-faring vessels they constructed carried young American troops into the fray of a faraway battle fought to ensure freedom and democracy for all. But their unprecedented entry into the wartime work force also marked the beginning of a new era of personal freedom for women.

“I felt like I just wanted to do my part,” said Ruth Glover, whose husband fought in Europe and was later wounded at Normandy. She bucked rivets on the upper turret of the first B-29 airplane ever produced. The high-altitude, long-range bomber became a critical member of the Allied air fleet and would later carry the atomic bomb to Japan. “It was exciting, and it gave me something to worry about other than my husband.”

Eva Craig was 39 years old when she became a scaler at Associated Ship Builders on Harbor Island in Seattle’s Puget Sound for a different reason. She joined her husband in the work force and asked the oldest of her six children to care for the youngest so she could gain personal freedom for the first time.

“I had never worked outside the home or been able to earn my own money before,” said the 91 year-old as she relaxed in a plush recliner. “This was my chance.”

After Ruth Quintieri graduated from Caldwell High School in 1940, she heeded the advice of an uncle and headed west to a Portland, Ore., shipyard. There, she made about $50 a week—a 75 percent raise from her Nampa dime store salary.

“He told me ‘You get the same wages as a man, and they treat you like a man,’” she said.

Once they’d found work in wartime industries, new opportunities kept women there. In 1940, about half of the 11 million working women held poorly paid clerical, sales and service jobs. The one-ﬁfth engaged in manufacturing were concentrated at the low end, mostly in textile and clothing factories.

But the tides changed. At the peak of women’s wartime employment four years later, more than 3 million women had moved into manufacturing positions, representing a 140 percent increase for the figure for 1940.

Even more astonishing was the 460 percent increase in the number of women employed in production in the “war industries” — metals, chemicals and rubber — that had employed few women before the war.

And it was then that the image of Rosie the Riveter was born. The attractive, determined brunette gazed at America from posters and memorabilia and symbolized a national effort for victory.

Quintieri and her sister-in-law were first hired as ship fitter’s helpers in Kaiser’s Swan Island shipyard. An entry-level position, she was neither challenged nor terribly fulfilled by her work.

“They told us to carry a hammer and look pretty,” she said. “We ended up on the outfitting dock, putting the finishing touches on ships that were heated and really comfortable. So, some of the others called us ‘the glamour girls of berth one.’”

But she, like Craig, decided she wanted more. They took advantage of educational opportunities and advanced through the ranks. Quintieri tried her hand at bucking rivets and riveting before settling down as a ship fitter — a carpenter of sorts that works with steel instead of wood. By learning to read blueprints, they each supervised crews to piece together ships that would carry American troops around the globe.

Between 1940 and 1944, the number of employed women rose by half, reaching a high of 19 million. And for the first time in American history, married women outnumbered singles.

This was not a matter of choice, but of need. When the supply of white males and single white females was exhausted, employers had no alternative but to hire married women and blacks.

“Our foreman wasn’t happy about having women on his crew,” Quintieri explained. “He thought the men wouldn’t be able to control themselves, so he watched us like a hawk and we were well protected.”

And while many enjoyed the experience of working for the war, they faced challenges new to women.

The fever of war had infected the nation, and more than 6.5 million people joined the wartime labor force who wouldn’t have worked if they weren’t needed so badly. Boys and girls left school early to work in paying jobs, and old men came out of retirement to fill in for youths who’d been drafted.

But married women accounted for the largest number of adult workers, despite the prejudice against them. In a 1936 Gallup poll, 82 percent of male and three quarters of female respondents said wives with employed husbands should not work. The government agreed, encouraging young mothers, in particular, to stay home.

“No women responsible for the care of young children should be encouraged or compelled to seek employment which deprives their children of essential care until all other sources of supply are exhausted,” stated a directive issued by Paul Minuet, chairman of the War Manpower Commission.

Those conventions didn’t stop Glover, though. She was 23 years old, and her two children were toddlers when she began working the swing shift 4 p.m. to midnight. Her cousin baby-sat while she crouched in the belly of an airplane for several months, pressing a bucking bar against the force of a compressed rivet gun, manned by a very nice man from Tennessee. When they heard a sharp whistle, they sat and ate their lunches. And when they heard another, they stood up and went back to work.

Craig’s two oldest daughters ran her household and helped raise their younger siblings in their mother’s absence. They baby-sat, kept house, cooked and shopped for the family. Without their help, she surely would have been unable to work.

Women with children struggled to join and remain in the work force, because few businesses provided convenient hours to accommodate the schedules of working women. Child care, too, was nearly impossible to find and even less affordable.

But for the three Canyon County women, the struggle was worth it.

After the war, Quintieri attended the College of Idaho but she left disenchanted. She said all her female classmates could realistically become were (nursing, teaching or clerking.)

“I didn’t want to be any of those,” she said with an air of pride. “The shipyards were my college — my growing up years.”

Craig took pride in her workwomanship, having pieced together 140 battleships throughout the course of the war. “Each one had to be spotless,” she recalled, because Navy officials clothed in white, cotton gloves wiped every steel surface with freshly scrubbed scrutiny.

As for Glover, “it was fun.” And it was important. Even though her supervisors didn’t train her to buck rivets, because they said “anybody can do it,” she took pride in her work. “We didn’t dare leave a rivet crooked, ‘cause those boys had to be able to shoot all the way around!”

But Aug. 14, 1945, marked both and end a new beginning for women in the wartime industries. While “Rosie the Riveter” posters came down across the country, careers for women fueled by new-found strength and independence took off.

Craig said when every whistle, bell and horn sounded one afternoon, she and her crew didn’t have to be told what it meant. In Portland, Quintieri and her co-workers threw up their gloves and walked out of the shipyard that had employed them for years. And they never returned. Parties exploded in cities across the nation, and young and old alike celebrated Allied victory.

“It was kind of mixed emotions for us, though, because we had been told the end of the war would be the end of our neat jobs,” Craig recalled. “But we were so glad it was over.”

Most Americans expected the married women only working for the duration of the war would return home when it was over. But their self-reliant trend would set a pace and precedent for all women who followed.

In 1940, 15 percent of married women held outside jobs. The number increased to one in four in 1950 and then to more than half in 1980. So, while the prominent role played by married women in wartime was seen as a temporary expedient, it marked a historic change from a relatively small female work force dominated by young singles to an immense force largely comprised of older married or formerly married women.

But after raising their children, all three women and many who followed would find themselves not only in other jobs but in dreams of bright, limitless futures.

“In years after the war, it was kind of fun to say I was a ‘Rosie the Riveter’ —and it still is,” Quintieri said, smiling. “Now I know I can do anything I want.”