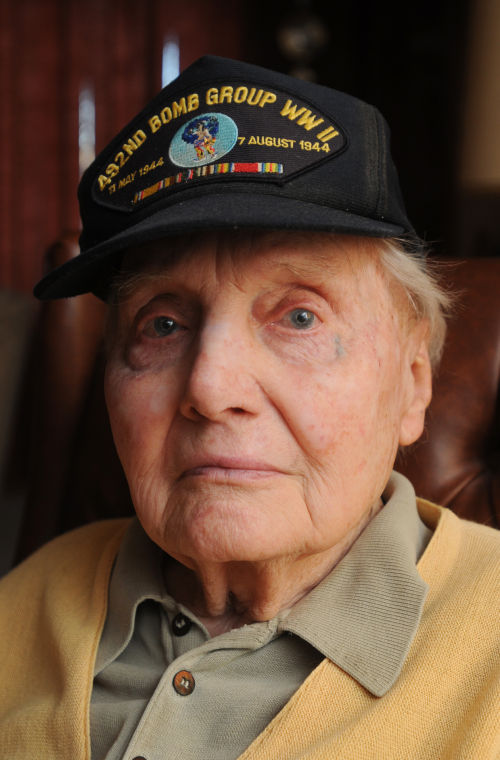 Richard Rosenberry, of Caldwell, is a survivor of the Pearl Harbor Attack on Dec. 7, 1941. Rosenberry was wounded and received a purple heart. Rosenberry later served in Germany in 1944, where he was shot down on his third mission as a bombardier on May 19, 1944. Friday, Nov. 22, 2013 Adam Eschbach/IPT 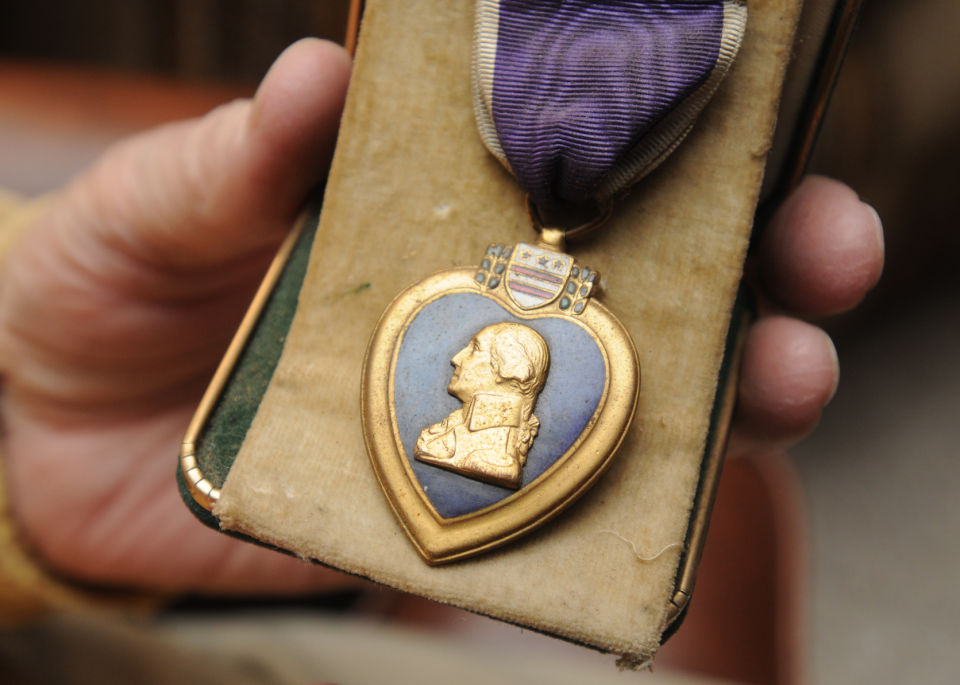 Richard Rosenberry, of Caldwell, holds a purple heart he received for being wounded during the Pearl Harbor Attack on Dec. 7, 1941. Rosenberry later served in Germany in 1944, where he was shot down on his third mission as a bombardier on May 19, 1944. Friday, Nov. 22, 2013 Adam Eschbach/IPT 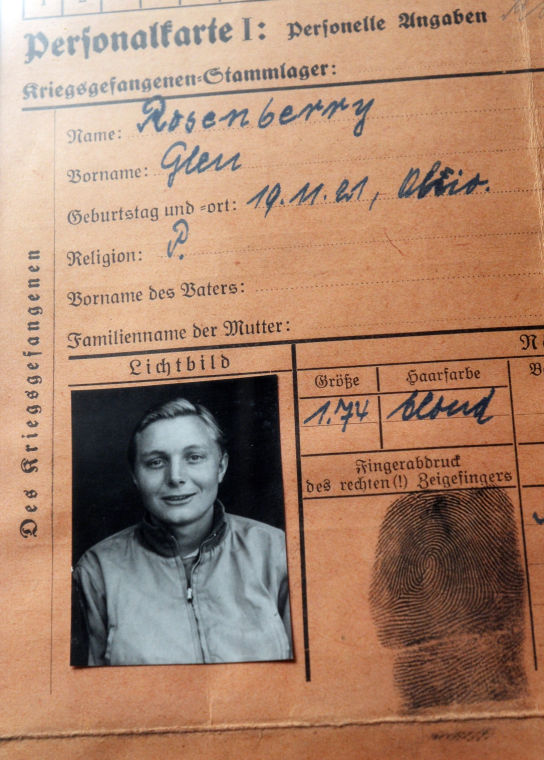 Richard Rosenberry, of Caldwell, is a survivor of the Pearl Harbor Attack on Dec. 7, 1941. Rosenberry was wounded and received a purple heart. Rosenberry later served in Germany in 1944, where he was shot down on his third mission as a bombardier on May 19, 1944. Friday, Nov. 22, 2013 Adam Eschbach/IPT

Richard Rosenberry, of Caldwell, holds a purple heart he received for being wounded during the Pearl Harbor Attack on Dec. 7, 1941. Rosenberry later served in Germany in 1944, where he was shot down on his third mission as a bombardier on May 19, 1944. Friday, Nov. 22, 2013 Adam Eschbach/IPT

Originally published Feb. 28, 2001, in the Cavalcade: Honoring Our Military Heroes.

For Ohio native and Caldwell resident Richard Rosenberry, close calls during his military service became a routine part of his job.

But somehow, after being nearly blown apart by the Japanese in Pearl Harbor and shot down in Germany, the ex-POW lived to tell of the times he nearly died in the name of freedom.

Rosenberry’s military career began on Nov. 28, 1939 — on the heels of receiving his high school diploma — when he enlisted in the U.S. Army Air Corps. Upon his enlistment, he embarked on St. Mihiel transport, arrived in Panama on Dec. 25, then served a week of shore duty on Angel Island.

His next assignment was at Hickam Field in Honolulu, Hawaii, the duty station Rosenberry selected when he enlisted. “Which for an Ohian was indeed magnificent,” he said.

But being a new base, Rosenberry recalled, Hickam was far from “magnificent.”

“Hickam Field was in the process of construction,” he said. “We lived in tents and I was issued clothing and received some close order drill without a rifle. I did various menial jobs: KP, PA — a wooden stick with a nail in the end — screening top soil, planting flowers, etc. And I attended clerical school at Wheeler Field.”

More than a year later, Rosenberry was installed in the personnel section of Hq & Hq Sqn, 18th Bomb Wing. After the Sergeant quit the military in August 1941, Rosenberry became head of the department as a private.

“I basically took care of the roster of personnel, including officers and enlisted personnel,” he said. “And I had an Ordnance Co. and Signal Co. attached for administration records and allotments.”

“On Dec. 7, I was living in new barracks on the second floor.” he said. “I heard a loud explosion, ran outside and noticed black smoke in the area of the Navy’s part of Pearl Harbor. Torpedo bombers came over with Japanese markings. ”

Rosenberry said he then ran to the supply office — which had armaments — and received a Lee Enfield rifle with a part of a belt of .30 machine gun ammo. He proceeded across the street and commenced firing at low level bombers.

“I could see bombs falling towards me so I laid down facing the bombers,” he said. “When the bombs exploded the concussion carried me up and I could see over the palm trees. When I hit the ground my feet were in a bomb crater and I was bleeding from a wound in the left foot and on the bridge of my nose where I had collided with my rifle as a result of the bomb explosion.”

Rosenberry then saw a damaged weapons carrier in the street and proceeded to get in and drive around in the immediate area and pick up wounded soldiers. He drove them to the base hospital, where he was advised to take the wounded to the Army Hospital, Tripler General, in Honolulu. He said upon arrival and discharging the wounded, he decided that he should join them.

Rosenberry was operated on sometime around Dec. 20 and returned to duty shortly after Jan. 1.

He then made a number of applications for Officer Candidate School and took the examination for aviation cadet. He passed, was relieved after three or four months and was then shipped back to the states. After basic training in Santa Ana, Calif., he attended bombardier school in Victorville, Calif. After he was commissioned in August 1943, he was assigned to a crew, which remained together until shot down in May 1944.

During an operation out of North Pickingham May 11, 1944, the crew was on its third mission to Germany when its plane was shot down north of Brunswick. Four crew members escaped.

“The tail gunner had a wounded leg, waist gunners put a tourniquet and parachute on him and threw him out five or 10 minutes before we abandoned ship,” Rosenberry said. “The navigator, myself and a waist gunner also survived. The rest apparently went down with the plane. I bailed out at 20,000 feet, free fell for 18,000 feet and pulled my rip cord. I was struck by debris, which broke my right leg immediately upon leaving the plane.”

Upon reaching ground he was picked up by farmers and shortly thereafter taken to the highway, where he said two officers immediately in an open Volkswagen two-door automobile.

“The passenger got out, checked me for weapons and had me get in the back seat,” Rosenberry said. “After a conversation with the driver, I was requested to get out and go down the road. After about 100 feet they pulled up and again the passenger got out, pulled the seat forward and put me in the rear seat and took me to the local jail.”

Rosenberry said he was ultimately sent to a POW hospital, after initial treatment by Germans for the injuries he sustained when his plane was shot down. He was then sent to Stalag Luft #3 in Sagan, Germany and was in the camp’s north compound until Jan. 28, 1945, when approaching Russian troops forced prisoners and Germans to march south and west.

“We had a train ride from around Chemnitz to Frankfurt on the Main, then walked to Mooseburg, where the U.S. Third Army took over our confinement,” Rosenberry said. “We spent approximately 80 days on the road to Mooseburg. We were then air transported to LeHarve and by ship to New York City via Trinidad.”

Not all of Rosenberry’s close calls happened during combat, however. He recalled one particularly harrowing experience he had during a night practice mission out of Mountain Home.

“A practice bomb hung up in the right rear bomb bay,” he said “We discovered it when the bomb bay doors were closed and the bomb fell in the bomb bay. We were at 10,000 feet. Being the armament officer, I was the designated answer to this problem On viewing the situation, the only solution was to lay down on the eight-inch catwalk — without my parachute — and reach over and pick up the bomb.

“It was a 100-pound practice bomb —— sand with five pounds of black powder detonated by a shotgun shell,” he continued. “It was rolling around in the bomb bay fully armed. So I proceeded to put the plan into effect. I reached over and secured the bomb, raised it to the catwalk and had the engineer open the bomb bay doors. Needless to say the sight was awesome. We dropped the bomb through the open bay south of Marsing and we returned to base.”

Rosenberry went through further flight training in Casper, Wyo., and Alomogordo, N.M. He got a new airplane and flew a southern route to West Palm Beach, the port of Spain, Belem, Fortaleza, Dakar, Marrakech and England. His entire group made the trip without major incident, Rosenberry said.

They grew up during the Great Depression and put their lives on the line to fight in World War II.

In Brokaw’s book, “The Greatest Generation,” he describes the people of the generation, now in their 90s, the “greatest generation any society has ever produced.”

But it’s likely those who were a part of it wouldn’t describe themselves that way.

Richard Rosenberry, 92, Caldwell, was at Pearl Harbor Dec. 7 and received a Purple Heart after his service in WWII, but he doesn’t call himself a part of “The Greatest Generation.”

“I was just there,” he said. “I was caught up in it and I had to do it. That was just part and parcel of living.”

He said his generation, whether at Pearl Harbor, in the European trenches of WWII or at home, were focused on surviving, not the fame of one day being referred to as “The Greatest Generation.”