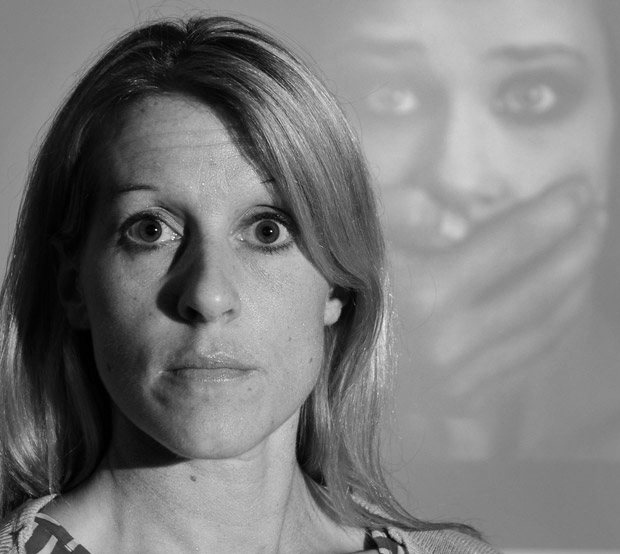 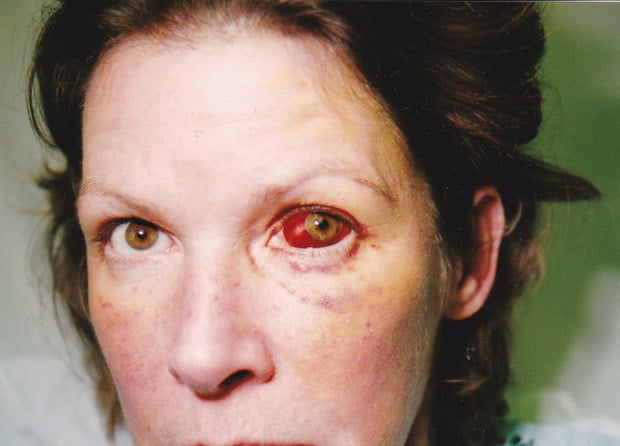 More women are seen in emergency rooms for domestic violence than for car accidents, rapes and assaults combined. 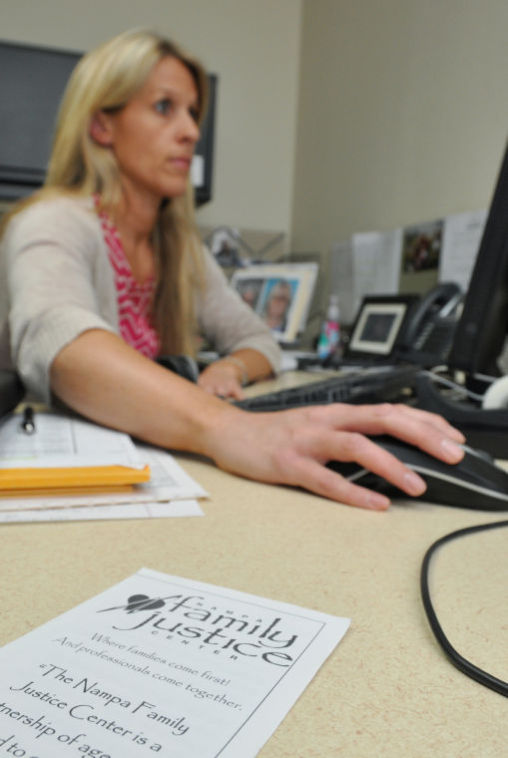 Detective Kari Seibel works on paperwork and reports from the night before at her desk at the Family Justice Center in Nampa. Seibel has worked on domestic violence cases at the center for one year. 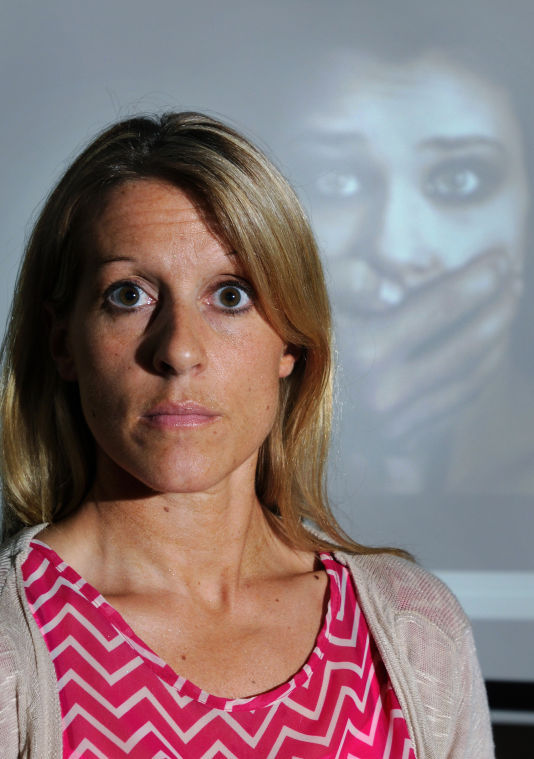 More women are seen in emergency rooms for domestic violence than for car accidents, rapes and assaults combined.

Detective Kari Seibel works on paperwork and reports from the night before at her desk at the Family Justice Center in Nampa. Seibel has worked on domestic violence cases at the center for one year.

It’s the most common call received by our local police departments. A family member, a close friend or a neighbor calls dispatch to report suspected domestic violence.

Even a stranger will, on occasion, call in after witnessing a battery in public.

“My experience has been, though, that for every one that is reported, there’s at least a handful that are not,” Nampa Police Detective Kari Seibel told the Idaho Press-Tribune. “So people stepping up and reporting what they’ve witnessed does not always happen.”

A possible reason for this apprehension is fear of retribution. If an abuser is willing to use violence against someone they love, what will they do to a complete stranger?

No civilian is ever expected to step in and physically intervene, Seibel said. But giving police an anonymous tip could be the victim’s only chance at coming to the attention of law enforcement.

Officers don’t mind false alarms, either. It’s their job — not the job of the witness — to determine if domestic violence has occurred.

Detective Kari Seibel loves her job. It’s satisfying, she said, to help those trapped in abusive relationships get the help they need to turn their lives around. But it’s also frustrating, because the stream of domestic violence cases never ends.

And those are only the ones the police know about. She can only speculate, she said, about how many never come to law enforcement’s attention.

By the time a case comes across Seibel’s desk, she already knows she’s dealing with a domestic violence situation. A victim may walk into the Nampa Family Justice Center looking for help, or an anonymous tipster might call with concerns about a friend or neighbor.

Other times, a patrol officer might spot some telltale signs while going about routine tasks.

“You maybe see some erratic driving behavior, or you’ll pull up behind them at an intersection and you potentially could witness a physical battery occurring,” Seibel said. “Or you can tell by someone’s body language that they’re in a heated argument which was preceded by physical battery.”

Patrol officers might also spot a battery in process on a street, in a front yard, or even inside an open doorway.

Some abusers, Seibel said, are brazen enough to strike their partners in public spaces like stores and restaurants. And they might even get away with it, because not everyone picks up the phone when they should.

“People call in and say, ‘Hey, I saw this suspect punch this victim as they were leaving the parking lot,’ or, ‘This happened in Aisle 6 at Walmart,’” she said. “My experience has been, though, that for every one that is reported, there’s at least a handful that are not. So people stepping up and reporting what they’ve witnessed does not always happen.”

So why wouldn’t someone report it? Seibel asked that very question when she taught a group of Nampa residents at a citizens’ academy. A common answer: If someone is willing to use violence against someone they love, what will they do to a complete stranger? What if it escalates? What if they have a weapon?

Seibel’s response: No civilian is ever expected to step in and physically intervene. But placing an anonymous call as soon as you’re out of earshot might be that victim’s only chance — ever — to come to law enforcement’s attention.

And even if a witness isn’t sure what they saw qualifies as domestic abuse, it’s the job of detectives — not the general public — to figure that out.

“It’s really a stressful situation for a law enforcement officer to make that determination,” Canyon County Sheriff’s Office Detective Val Brisbin said. “But that’s what they’ve been trained to do, is decipher what’s happened in that situation.”

A detective might also become aware of a domestic violence situation through the investigation of another incident — while looking into a health and welfare or child abuse case, Brisbin said, an investigator might find that one spouse has an unhealthy amount of control over the other.

Those kinds of incidents don’t always correlate with domestic violence, he said, and there’s not necessarily a causal relationship between them. But often, for those with a need to control others, it can manifest in different ways.

“Obviously if there’s a domestic abuse relationship, you’re going to have fallout with the children in one way or another,” Brisbin said. “We’ve had cases when we’ve investigated child abuse or neglect or something like that, and realized there’s a bigger picture with the domestic issue.”

And it’s a big issue, Seibel said: Domestic violence calls are the single most common type of call police respond to. It’s not centered in any particular neighborhood, income-level or ethnicity. It’s everywhere. And even for those not involved in abusive relationships, they almost certainly know someone who is.

One of the most important things she tries to tell those in abusive relationships: Look at how it’s affecting your kids.

“You just got your nose broken. You’ve got blood all over your face and your clothes, and none of your kids are crying,” she said. “None of your kids are showing that they’re scared. That’s because this is a normal for them at this point. This is not the most traumatic experience that they’ve been through, and that’s worrisome to me.”

And as they grow up, they’re more likely to continue the cycle of violence than children from healthy homes.

The Idaho Press-Tribune is presenting a series of stories on domestic violence issues in our community. Read the series as it appears at idahopress.com/domesticviolence

Reporter Torrie Cope shared the stories of local victims of domestic violence, from the first controlling behaviors to the day they finally fled. Also, health care providers shared with local editor Charlotte Wiemerslage some of the warning signs of abuse, both physical and emotional.

Reporter John Funk talked to both counselors and law enforcement personnel in an effort to understand the minds of domestic abusers. Also, reporter Torrie Cope shared the surprising impact domestic violence has on both the work environment and the bottom line.

Reporter John Funk sheds light on the difficult job police officers and sheriff’s deputies face in identifying and investigating alleged acts of domestic battery. Also, a psychologist and school counselor share with reporter Nick Groff the challenges of working with children who come from abusive homes.

Reporter Kelcie Moseley sits down with a special prosecutor, a victim-witness coordinator and a judge to discuss the legal process used to bring abusers to justice. Also, lawmakers explain to reporter Mike Butts the role they play in keeping Idaho women safe.

What is partner abuse?

“The ongoing, debilitating experience of physical, psychological and/or sexual abuse in the home, associated with increased isolation from the outside world and limited person freedom and accessibility to resources.” — American Medical Association

Why wouldn’t a victim seek help?

He stated he was upset that he called the police yet he was the one going to jail. While he was in the back seat of my patrol car he stated “I won’t ever call you guys a-f@#$%^ again. I’ll just beat the f@#$ out of her and put her in a drain.”

He stated the apartment was a wreck and there was furniture turned over and it was very apparent that there had been a struggle.

She stated that is when he punched her in the face. She stated she tried to fight back and after he attempted a second time to hit her, missing, he grabbed her with both hands, around the throat and pushed her against the car and was squeezing.

When she tried to leave the house, he blocked the door so she could not leave. He only moved out of the way after she opened the window and was screaming for help. She felt like she was going to die while he was strangling her.

He said he was trying to show her affection and they fell onto the couch and then on the floor. He said multiple times he was “restraining” her from hurting him, but said she was only hurting him emotionally. He denied his hands were on her throat and that he was just kissing her.

She stated she sees him almost every day on her street. She is concerned about the frequency in which she is seeing him near her home.

He was upset over several receipts and numbers he had found because she had supposedly cheated on him in the past.

She had scrapes and cuts all over her face. She also had half dollar size scrapes or floor burns on both of her knees. Her feet and legs were cut up and had blood on them.

He used both hands and picked her up by the neck and held her off the floor against the wall and then threw her onto the bed. She said he then choked her on the bed until she passed out.

She was transported to the hospital on a backboard due to possible internal injuries from the beating she received from him. The residence had lots of alcohol containers laying on the floor along with other items that appeared to have been thrown around.

This happened in the master bedroom. It was a little later when she heard the victim and suspect fighting.