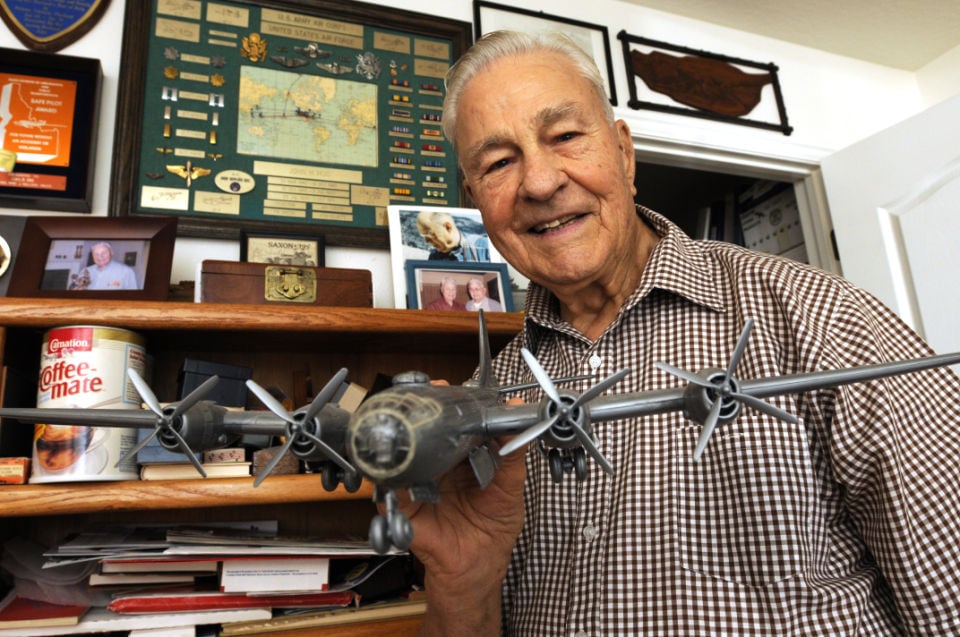 John Hug keeps a miniature version of a PT-17 biplane in his living room. 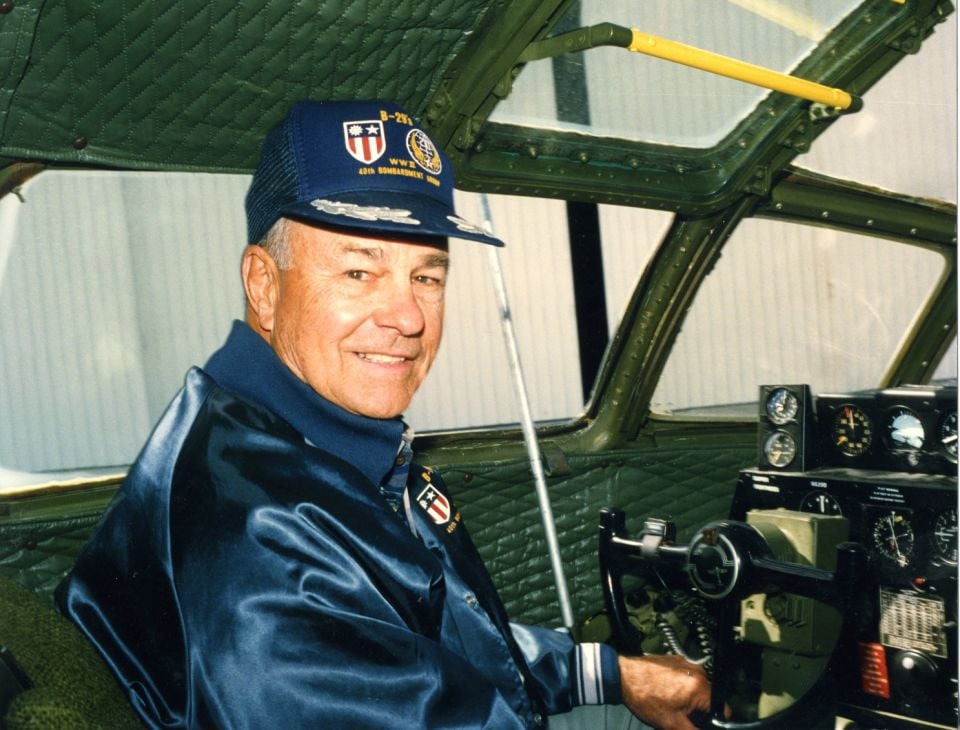 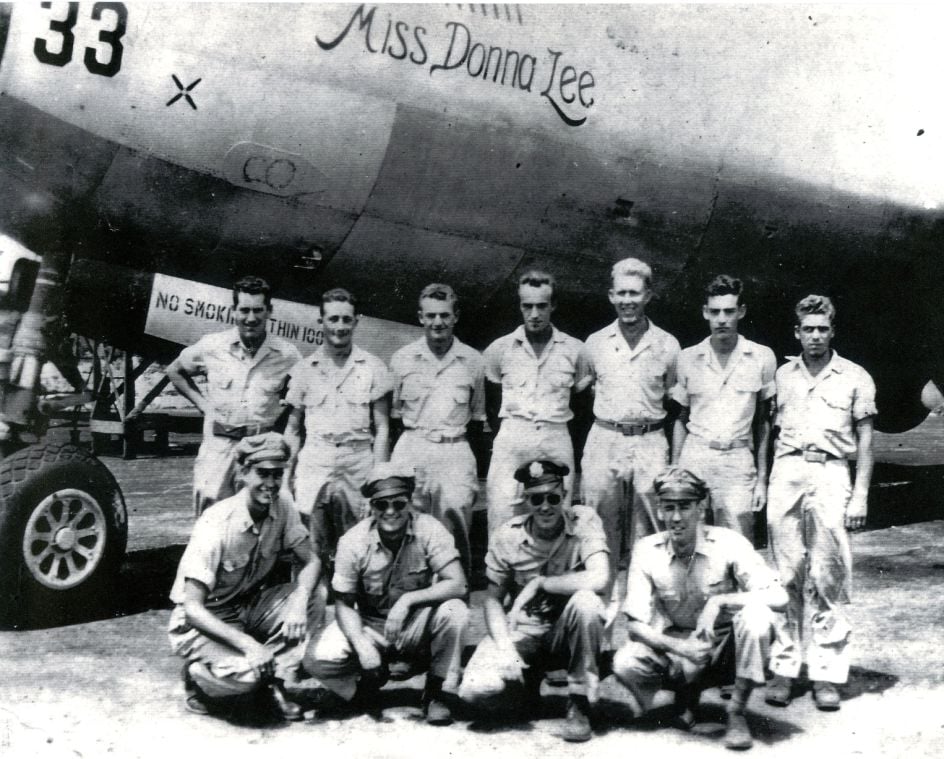 U.S. Army Air Corps 1st Lt. John Hug, lower left, shown in 1945 with crew of a B-29 bomber based on Tinian. The plane, Miss Donna Lee, was named for Hug’s baby daughter, whom he had yet to meet. 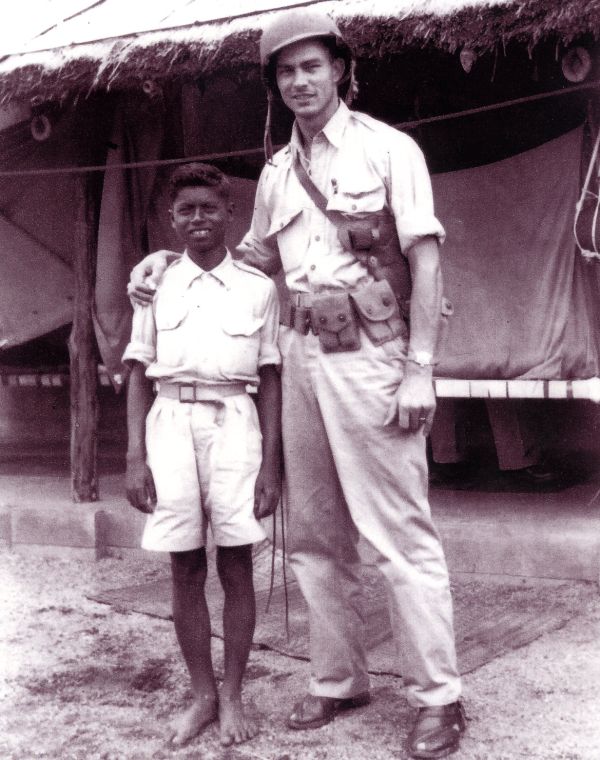 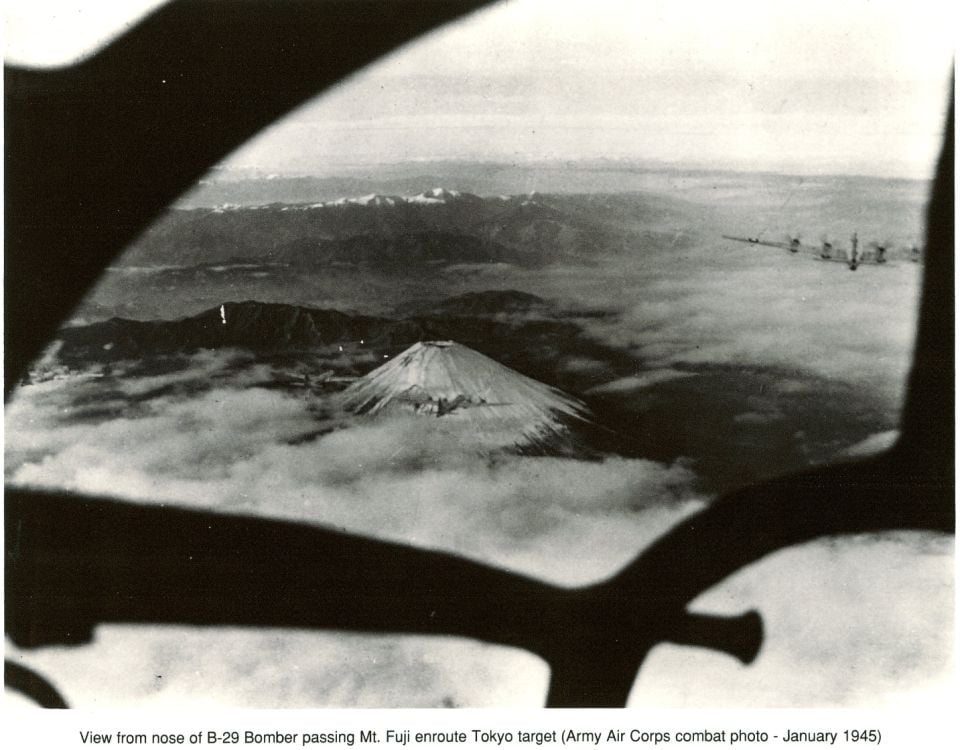 Mount Fuji, Japan, as seen from a B-29 on a bombing mission.

John Hug keeps a miniature version of a PT-17 biplane in his living room.

U.S. Army Air Corps 1st Lt. John Hug, lower left, shown in 1945 with crew of a B-29 bomber based on Tinian. The plane, Miss Donna Lee, was named for Hug’s baby daughter, whom he had yet to meet.

Mount Fuji, Japan, as seen from a B-29 on a bombing mission.

The military memorabilia and scale-model bombers that dominate a room in John Hug’s west Meridian home do double duty as office décor and historical timeline. Hug flew everything from biplanes to big jets in a 30-year U.S. Air Force flying career bookended by World War II and the Vietnam War.

Hug, who followed his Air Force career with 20 years of commercial flying in Idaho, links past and present in a way that goes beyond memories of a single war or era. He flew combat bombing missions and trained crews for them. He hauled people and supplies over hostile territory. He flew straight into the eyes of hurricanes — on purpose.

Hug has been an educational resource in southwest Idaho, teaching schoolchildren and adults how military aviation has changed over the decades, said Sue Paul, director of the nonprofit Warhawk Air Museum in Nampa. Hug is a popular participant in a monthly gathering the museum hosts for veterans of all eras, she said.

“He has been involved in that, bridging the generations,” Paul said.

A Warhawk-produced video interview details Hug’s experiences and the technical characteristics of the planes he flew. He logged many hours flying some of the country’s biggest warplanes.

“It was a fun time,” he said. “I never dreamed I would fly airplanes to begin with. I had never been up in an airplane till I joined the service.”

Hug’s home office in Meridian contains more than just models, photos and documents. There are decals and currency bills from the 50-odd countries he has visited, tags describing bombs and their destinations, a painting of the B-29 bomber named after his baby daughter and other items.

In his living room, he showed off a miniature version of a PT-17 biplane, the primary Army and Navy trainer during the World War II years.

“The first one I flew,” he said. “Most (pilots) went through three planes before they would get their wings.”

Hug advanced from the PT-17 to the Basic Trainer-13 and Advanced Trainer-17 — low-wing planes with one and two engines, respectively. As his military aviation career advanced, he flew four-engine bombers — some for carrying and dropping bombs in war and others converted for weather reconnaissance.

He flew 17 combat missions during World War II in Asia, plus the multi-force show of strength over Tokyo Bay on Victory over Japan Day in 1945.

Much of Hug’s World War II flying was over large expanses of ocean. One memorable mission was in Singapore, from the left seat of a four-engine B-29 bomber in April 1945.

“Eighteen hours and 20 minutes long — nine-and-a-half hours on three engines without a place to land,” he recalled.

Other dicey situations came Hug’s way, from almost running out of runway or fuel to getting a big plane out of a near-dive as crews struggled with touchy technology. In hurricane flying, for example, a weather-trained crew member making quick calculations and adjustments proved more reliable than instruments when the aircraft encountered the requisite plunge in barometric pressure.

“It’s scary being up there,” Hug said. “You are praying you are going to get back each time. It’s not a piece of cake.”

Hug grew up in Ames, Iowa, where his dad taught at Iowa State University. He attended the university, but after less than a year headed to Burbank, Calif., to work a swing shift for airplane maker Lockheed. That was summer 1941.

“I was bucking rivets, building P-38s and Lockheed Hudson Bombers for England,” he said. “There were hundreds of workers. It was going 24 hours a day.”

He returned to Iowa and took a U.S. Army Air Corps officer exam.

“There were so many people trying to get into the service at that time. I had to wait two months,” Hug said. He signed on, and then spent much of 1942 and part of ’43 in basic and flight-specific training.

When he first arrived for basic training in Santa Ana, Calif., after traveling three days by rail, “there were 50,000 cadets there, in tents. It was something to see,” he said. “They were building barracks as fast as they could for the guys.”

Almost no one complained about the temporary accommodations, Hug recalled.

“Everybody liked it. Everybody was gung-ho in those days to serve the country,” he said.

He earned his “wings,” signifying full-pilot status, in February 1943 after nine months of flight training.

He went to Roswell, N.M., serving as the pilot who flew bomber crews in training. He stayed about 18 months, flying the twin-engine AT-11. In World War II, he flew four-engine B-29s on combat missions out of India and Tinian, an island in the Marianas chain.

He ended up on Iwo Jima once.

“It saved my life, that island, because we didn’t have enough fuel to get home,” he said.

Later, Hug trained bomber crews who had served in World War II and were recalled to serve in the Korean War.

He then spent 16 years in weather reconnaissance. He flew places ranging from the North Pole to the Philippines and around Cuba during the Cuban Missile Crisis. Some of the work involved atomic air sampling.

Weather recon had Hug flying converted B-29, B-50 and B-47 (six-engine jet) bombers. The planes received a “W” at the front of their names after modifications like taking out refueling equipment not needed on the shorter, faster missions.

“We used to penetrate into the (hurricane) eye 500 feet above the water,” he said. “That’s unheard of now.”

Hug finished his military aviation career in C-130s. He piloted the big cargo prop planes in the Vietnam War in 1968 and 1969.

“We flew everything imaginable, from KIAs (personnel killed in action) to ice cream,” he said.

He retired as a lieutenant colonel at a base near Abilene, Texas, in 1971.

Hug, who settled in Meridian a year later, enjoys the veterans’ meetings at Warhawk.

“People make friends over there,” he said. “Everybody has stories.”

He participated in an Honor Flight of World War II vets to Washington, D.C., in 2012. He has stayed in contact with his own crews, and other veterans he has met, over the years.

“I never miss reading a story of a World War II veteran, or any veteran,” Hug said.