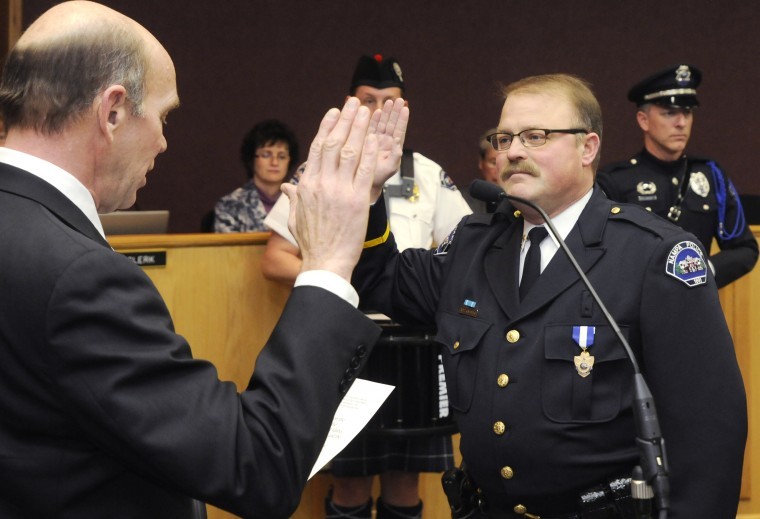 Craig Kingsbury is sworn is as the Nampa Police Chief by Nampa Mayor Tom Dale at Nampa City Hall Monday. 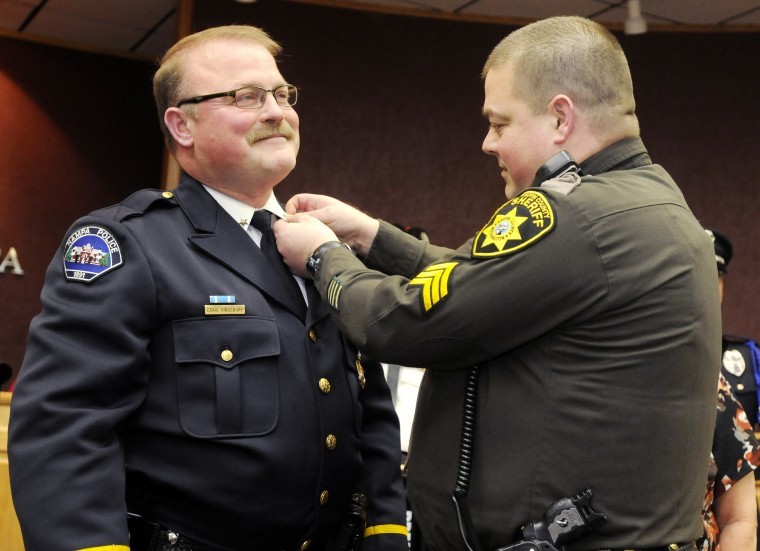 Nampa Police Chief Craig Kingsbury gets a star pinned to his collar by his brother Cory Kingsbury during his swearing in ceremony at Nampa City Hall Monday.

Craig Kingsbury is sworn is as the Nampa Police Chief by Nampa Mayor Tom Dale at Nampa City Hall Monday.

Nampa Police Chief Craig Kingsbury gets a star pinned to his collar by his brother Cory Kingsbury during his swearing in ceremony at Nampa City Hall Monday.

NAMPA — With bagpipes, drums and a change of command ceremony, Craig Kingsbury, a 21-year veteran of the Nampa Police Department, was sworn in as the new chief Monday night.

Mayor Tom Dale read the oath of office to Kingsbury in front of a full house inside Nampa City Hall. As his first duty as chief, Kingsbury promoted Lt. Brad Daniels to deputy chief. Daniels has been with the Nampa Police for 19 years and previously served three years with the Canyon County Sheriff’s Office.

“As the mayor said, I believe the Nampa Police Department is the best police department in the state and I will stand by that till the day I die. I’m very proud to be able to serve here and I look forward to serving for maybe 21 more years,” Kingsbury told the crowd.

Kingsbury replaces former chief LeRoy Forsman, who retired from the department. In a change of command ceremony, Forsman’s flag was retired and Kingsbury received his new flag. With the passing of the flags, Kingsbury told Forsman, “Sir, I assume command,” as part of the ceremony’s tradition.

Representatives from the Nampa Recreation Center, The Salvation Army and Boys & Girls Club went before City Council Monday to ask for funds for transportation to their after-school programs.

The Nampa School District ended funding to bus students to these programs in December, which saves the district about $84,000 as it works its way out of a $4.3 million budget shortfall.

But the savings for the school district led to a new dilemma for these programs. As they work to find long term solutions to fund after-school transportation, they are asking the city for $45,000 to get them through the end of the school year.

The programs serve an average of about 250 Nampa District students each day — about 120 to the Boys & Girls Club, 90 to the Rec Center and 30 to the Salvation Army, the representatives said.

Council agreed that the programs are important for the community and for the children they serve, but questioned who is responsible for funding the transportation. Council members also said the city faces a tight budget and questioned where the money would come from.

The Council did not take action on the funding Monday.